Helen is a city in White County, Georgia, United States, located along the Chattahoochee River. The population was 510 at the 2010 census. The city is known for its Bavarian style architecture and its mountainous landscape. 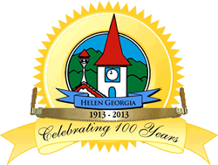 Find more things to do, itinerary ideas, updated news and events, and plan your perfect trip to Helen
ADVERTISEMENT

Rabun County is the northeasternmost county in the U.S. state of Georgia. As of the 2010 census, the population was 16,276. The county seat is Clayton. With an average annual rainfall of over 70 inches (1,800 mm), Rabun County has the title of the rainiest county in Georgia and is one of the rainiest counties east of the Cascades. The year 2018 was the wettest on record in the county's history. The National Weather Service cooperative observation station in northwest Rabun's Germany Valley measured 116.48 inches of rain during the year. During 2020, the Germany Valley NWS station reported a yearly precipitation total of 100.19 inches.