Wikipedia
Coeur d'Alene ( (listen) KOR də-LAYN; French: Cœur d'Alêne, lit. 'Heart of an Awl' [kœʁ d‿a.lɛn]) is a city and the county seat of Kootenai County, Idaho, United States. It is the largest city in North Idaho and the principal city of the Coeur d'Alene Metropolitan Statistical Area. In 2020, the United States Census Bureau estimated the city's population at 53,354. Coeur d'Alene is a satellite city of Spokane, which is located about thirty miles (50 km) to the west in the state of Washington. The two cities are the key components of the Spokane–Coeur d'Alene Combined Statistical Area, of which Coeur d'Alene is the third-largest city (after Spokane and its largest suburb, Spokane Valley). The city is situated on the north shore of the 25-mile (40 km) long Lake Coeur d'Alene and to the west of the Coeur d'Alene Mountains. Locally, Coeur d'Alene is known as the "Lake City," or simply called by its initials, "CDA." The city is named after the Coeur d'Alene people, a federally recognized tribe of Native Americans who lived along the rivers and lakes of the region, in a territory of 4,000,000 acres (16,000 km2) from eastern Washington to Montana. The native peoples were hunter-gatherers who located their villages and camps near food gathering or processing sites and followed the seasonal cycles, practicing subsistence hunting, fishing, and foraging. The city began as a fort town; General William Tecumseh Sherman sited what became known as Fort Sherman on the north shore of Lake Coeur d'Alene in 1878. Peopling of the town came when miners and prospectors came to the region after gold and silver deposits were found in what would become the Silver Valley and after the Northern Pacific Railroad reached the town in 1883. In the 1890s, two significant miners' uprisings over wages took place in the Coeur d'Alene Mining District, one of which became motivation for the bombing assassination of former Idaho Governor Frank Steunenberg in 1905. The late 19th century discovery of highly prized white pine in the forests of northern Idaho resulted in a timber boom that peaked in the late 1920s and was accompanied by the rapid population growth which led to the incorporation of the city on September 4, 1906. After the Great Depression, tourism started to become a major source of development in the area. By the 1980s, tourism became the major driver in the local economy, and, after decades of heavy reliance on logging, the city featured a more balanced economy with manufacturing, retail, and service sectors. The city of Coeur d'Alene has grown significantly since the 1990s, in part because of a substantial increase in tourism, encouraged by resorts and recreational activities in the area and outmigration predominantly from other western states. The Coeur d'Alene Resort and its 0.75-mile (1.21 km) floating boardwalk and a 165-acre (0.67 km2) natural area called Tubbs Hill take up a prominent portion of the city's downtown. Popular parks such as City Park and Beach and McEuen Park are also fixtures of the downtown waterfront. The city has become somewhat of a destination for golfers; there are five courses in the city, including the Coeur d'Alene Resort Golf Course and its unique 14th hole floating green. The Coeur d'Alene Casino and its Circling Raven Golf Club is located approximately 27 miles (43 km) south and the largest theme park in the Pacific Northwest, Silverwood Theme Park, is located approximately twenty miles (30 km) north. There are also several ski resorts and other recreation areas nearby. The city is home to the Museum of North Idaho and North Idaho College, and it has become known for having one of the largest holiday light shows in the United States and hosting a popular Ironman Triathlon event. Coeur d'Alene is located on the route of Interstate 90 and is served by the Coeur d'Alene Airport as well as the Brooks Seaplane Base by air. In print media, local issues are covered by the Coeur d'Alene Press daily newspaper.
Find more things to do, itinerary ideas, updated news and events, and plan your perfect trip to Coeur D'Alene
ADVERTISEMENT
Omaze 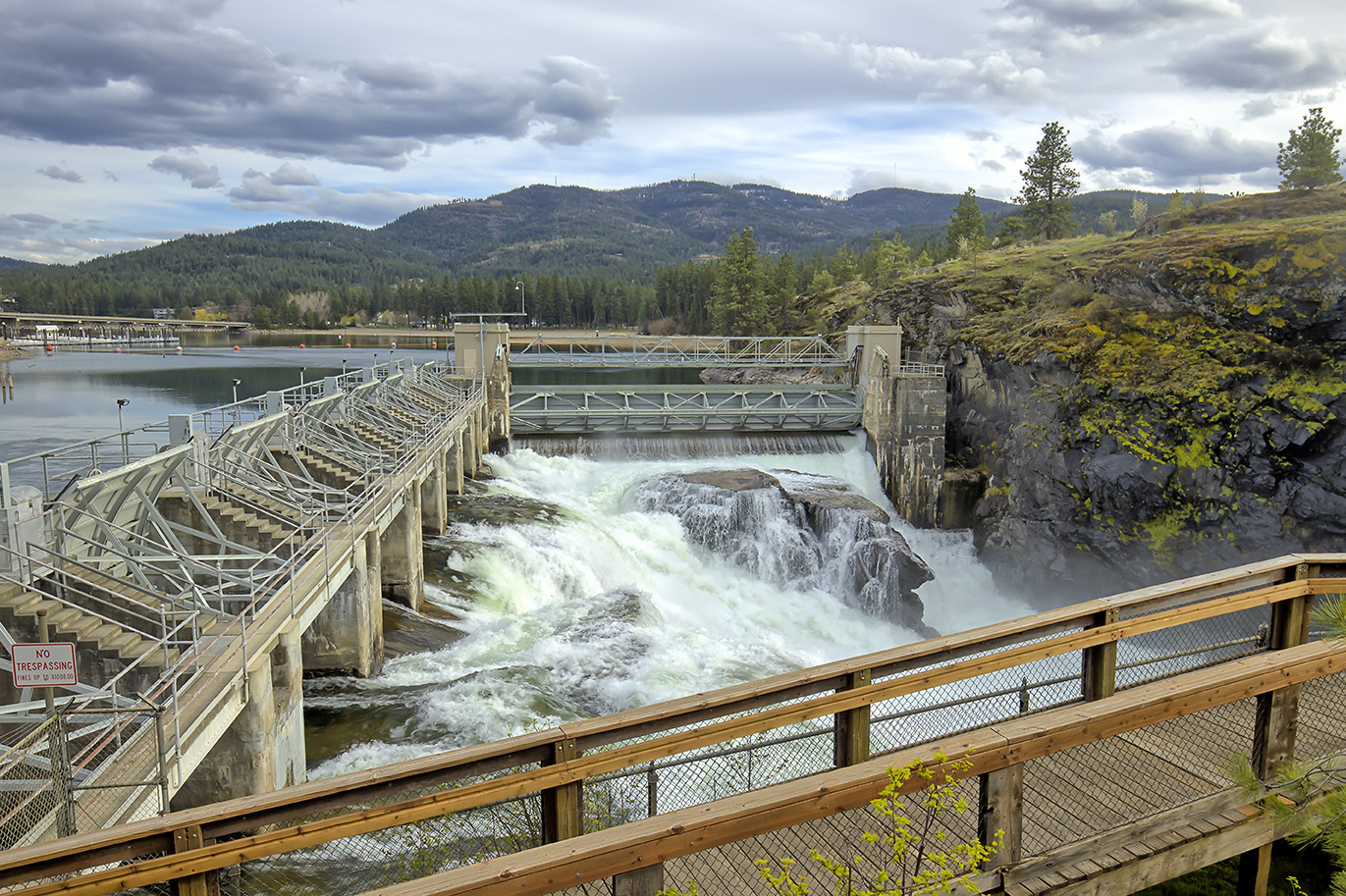 Post Falls is a city in Kootenai County, Idaho, between Coeur d'Alene and Spokane, Washington. It is a suburb of Coeur d'Alene, to the east, and a bedroom community to Spokane, to the west. The population was 27,574 at the 2010 census, up from 17,247 in 2000 census, making it Idaho's tenth largest city. The U.S. Census Bureau estimated 2019 population is 36,250. 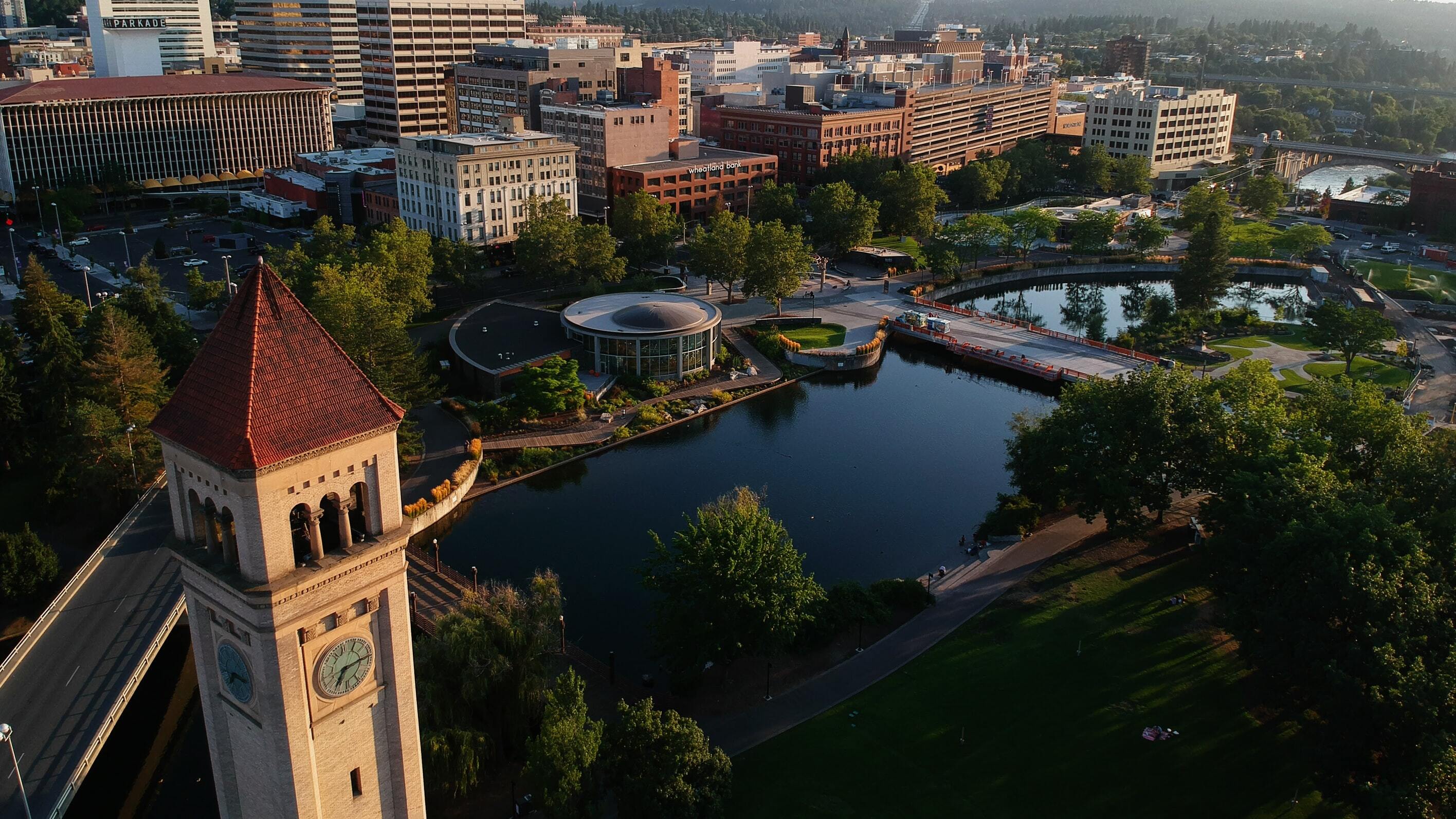 Spokane ( (listen) spoh-KAN) is the largest city and county seat of Spokane County, Washington, United States. It is in eastern Washington along the Spokane River adjacent to the Selkirk Mountains and west of the Rocky Mountain foothills, 92 miles (148 km) south of the Canadian border, 18 miles (30 km) west of the Washington–Idaho border, and 279 miles (449 km) east of Seattle along I-90. Spokane is the economic and cultural center of the Spokane metropolitan area, the Spokane–Coeur d'Alene combined statistical area, and the Inland Northwest. It is known as the birthplace of Father's Day, and locally by the nickname of "Lilac City." A pink double flower cultivar of the common lilac, known as Syringa vulgaris 'Spokane', is named for the city. Officially, Spokane goes by the nickname of Hooptown USA, due to Spokane annually hosting the world's largest basketball tournament, and to spread awareness about the city's growing popularity for the sport. The city and the wider Inland Northwest area are served by Spokane International Airport, 5 miles (8 km) west of Downtown Spokane. According to the 2010 Census, Spokane had a population of 208,916, making it the second-largest city in Washington, and the 99th-largest city in the United States. In 2019, the United States Census Bureau estimated the city's population at 222,081 and the population of the Spokane Metropolitan Area at 573,493.The first people to live in the area, the Spokane tribe (their name meaning "children of the sun" in Salishan), lived off plentiful game. David Thompson explored the area with the westward expansion and establishment of the North West Company's Spokane House in 1810. This trading post was the first long-term European settlement in Washington. Completion of the Northern Pacific Railway in 1881 brought settlers to the Spokane area. The same year it was officially incorporated as a city under the name of Spokane Falls (it was reincorporated under its current name ten years later). In the late 19th century, gold and silver were discovered in the Inland Northwest. The local economy depended on mining, timber, and agriculture until the 1980s. Spokane hosted the first environmentally themed World's fair at Expo '74. Many of the downtown area's older Romanesque Revival-style buildings were designed by architect Kirtland Kelsey Cutter after the Great Fire of 1889. The city is also home to the Riverfront and Manito parks, the Smithsonian-affiliated Northwest Museum of Arts and Culture, the Davenport Hotel, and the Fox and Bing Crosby theaters. The Cathedral of Our Lady of Lourdes is the seat of the Roman Catholic Diocese of Spokane, and the Cathedral of St. John the Evangelist serves as that of the Episcopal Diocese of Spokane. The Spokane Washington Temple in the east of the county serves The Church of Jesus Christ of Latter-day Saints. Gonzaga University was established in 1887 by the Jesuits, and the private Presbyterian Whitworth University was founded three years later and moved to north Spokane in 1914.In sports, the region's professional and semi-professional sports teams include the Spokane Indians in Minor League Baseball and Spokane Chiefs in junior ice hockey. The Gonzaga Bulldogs collegiate basketball team competes at the Division I level. As of 2010, Spokane's major daily newspaper, The Spokesman-Review, had a daily circulation of over 76,000. 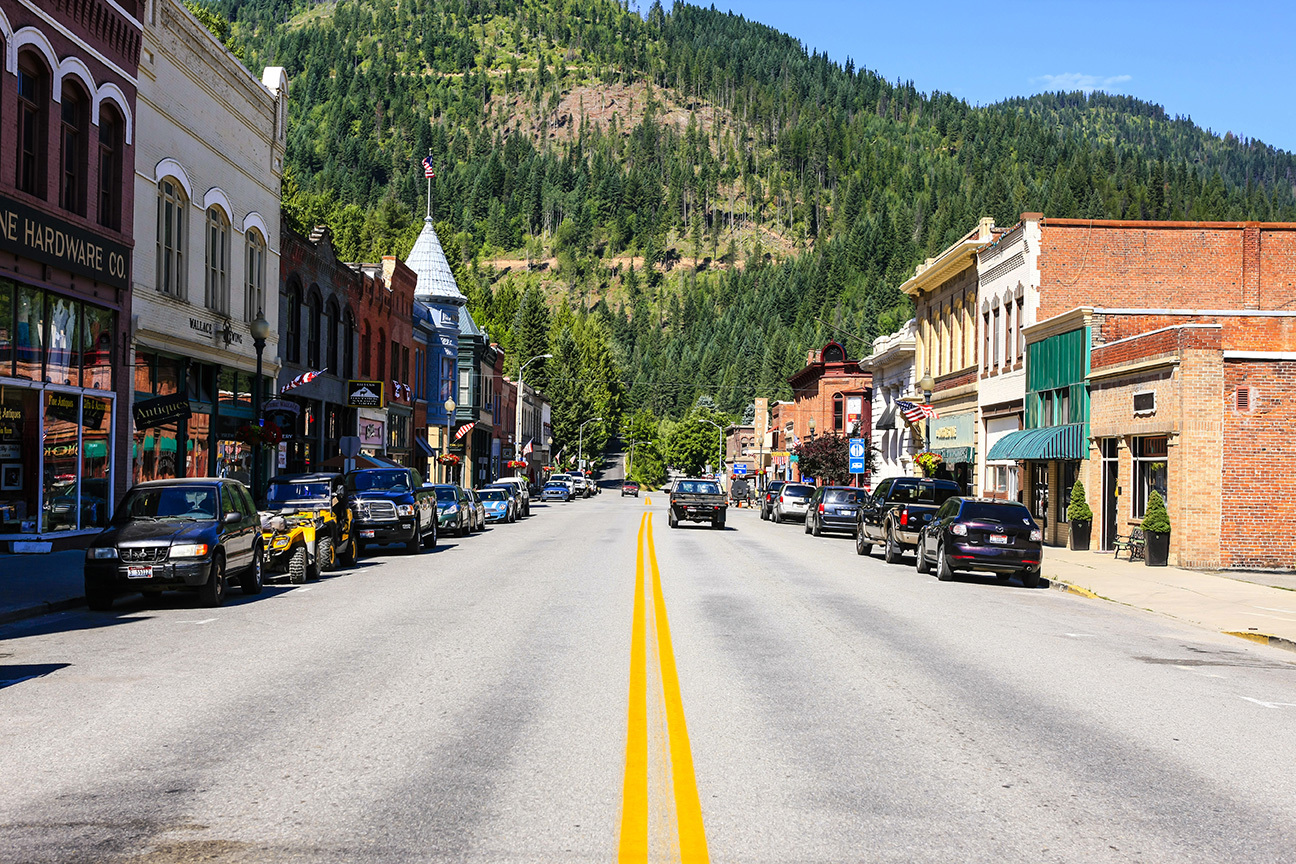 Wallace, Idaho is a city in and the county seat of Shoshone County, Idaho, in the Silver Valley mining district of the Idaho Panhandle. Founded in 1884, Wallace sits alongside the South Fork of the Coeur d'Alene River (and Interstate 90), approximately 2,730 feet (830 m) above sea level. The town's population was 784 at the 2010 census. Wallace is the principal town of the Coeur d'Alene silver-mining district, which produced more silver than any other mining district in the United States. Burke-Canyon Road runs through historic mining communities – many of them now deserted – north and eastward toward the Montana state line. The ghost town of Burke, Idaho is located 7 miles (11 km) to the northeast. East of Wallace, the Route of the Hiawatha (rails-to-trails) and the Lookout Pass ski area are popular with locals and tourists. 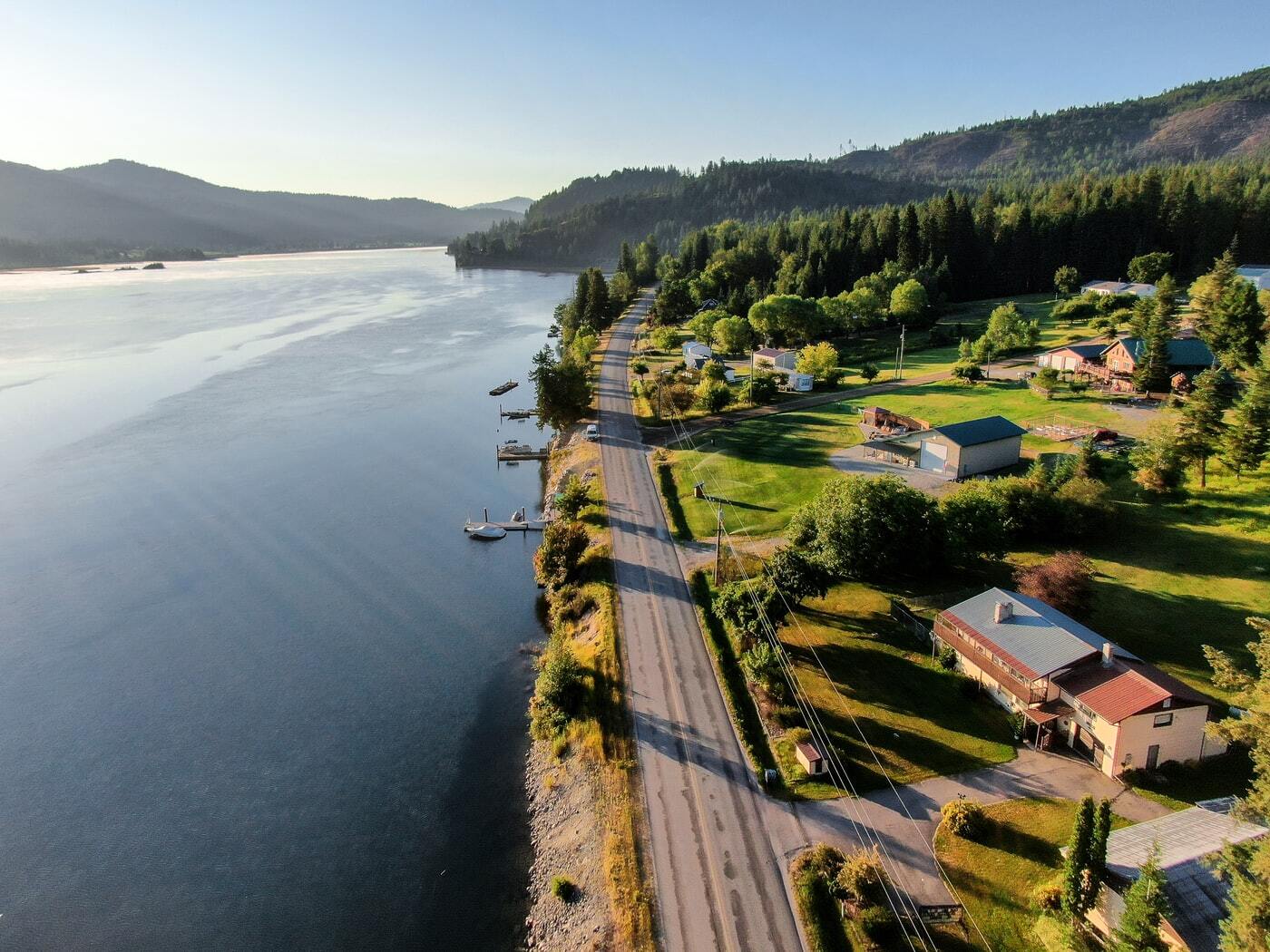 Sandpoint is the largest city in, and the county seat of, Bonner County, Idaho. Its population was 7,365 at the 2010 census. Sandpoint's major economic contributors include forest products, light manufacturing, tourism, recreation and government services. As the largest service center in the two northern Idaho counties (Bonner and Boundary), as well as northwestern Montana, it has an active retail sector. It is the home of the headquarters of utility aircraft maker Quest Aircraft and salad dressing manufacturer Litehouse Foods. Sandpoint lies on the shores of Idaho's largest lake, 43-mile-long Lake Pend Oreille, and is surrounded by three major mountain ranges, the Selkirk, Cabinet and Bitterroot ranges. It is home to Schweitzer Mountain Resort, Idaho's largest ski resort, and is on the International Selkirk Loop and two National Scenic Byways (Wild Horse Trail and Pend Oreille Scenic Byway). Among other distinctions awarded by national media in the past decade, in 2011 Sandpoint was named the nation's "Most Beautiful Small Town" by Rand McNally and USA Today.