Wikipedia
Davenport is a city in and the county seat of Scott County, Iowa, United States. It is located along the Mississippi River on the eastern border of the state, and is the largest of the Quad Cities, a metropolitan area with a population estimate of 382,630 and a CSA population of 474,226; it is the 90th largest CSA in the nation. Davenport was founded on May 14, 1836 by Antoine Le Claire and was named for his friend George Davenport, a former English sailor who served in the U.S. Army during the War of 1812, served as a supplier Fort Armstrong, worked as a fur trader with the American Fur Company, and was appointed a quartermaster with the rank of colonel during the Black Hawk War. According to the 2010 census, the city had a population of 99,685 (making it Iowa's third-largest city). The city appealed this figure, arguing that the Census Bureau missed a section of residents, and that its total population was more than 100,000. The Census Bureau estimated Davenport's 2019 population to be 101,590.Located approximately halfway between Chicago and Des Moines, Davenport is on the border of Iowa across the river from Illinois. The city is prone to frequent flooding due to its location on the Mississippi River. There are two main universities: St. Ambrose University and Palmer College of Chiropractic, where the first chiropractic adjustment took place. Several annual music festivals take place in Davenport, including the Mississippi Valley Blues Festival, the Mississippi Valley Fair, and the Bix Beiderbecke Memorial Jazz Festival. An internationally known 7-mile (11 km) foot race, called the Bix 7, is run during the festival. The city has a Class A minor-league baseball team, the Quad Cities River Bandits. Davenport has 50 plus parks and facilities, as well as more than 20 miles (32 km) of recreational paths for biking or walking. Three interstates, 80, 74 and 280, and two major United States Highways serve the city. Davenport has seen steady population growth since its incorporation. National economic difficulties in the 1980s resulted in job and population losses. The Quad Cities was ranked as the most affordable metropolitan area in 2010 by Forbes magazine. In 2007, Davenport, along with neighboring Rock Island, won the City Livability Award in the small-city category from the U.S. Conference of Mayors. In 2012, Davenport, and the Quad Cities Metropolitan Area, was ranked among the fastest-growing areas in the nation in the growth of high-tech jobs. Notable natives of the city have included jazz legend Bix Beiderbecke, Pulitzer Prize-winning playwright Susan Glaspell, former National Football League running back Roger Craig, UFC Welterweight Champion Pat Miletich, IBF Middleweight and WBA Super Middleweight boxing champion Michael Nunn, and former two time WWE Champion and WWE Universal Champion Seth Rollins.

Find more things to do, itinerary ideas, updated news and events, and plan your perfect trip to Davenport
ADVERTISEMENT 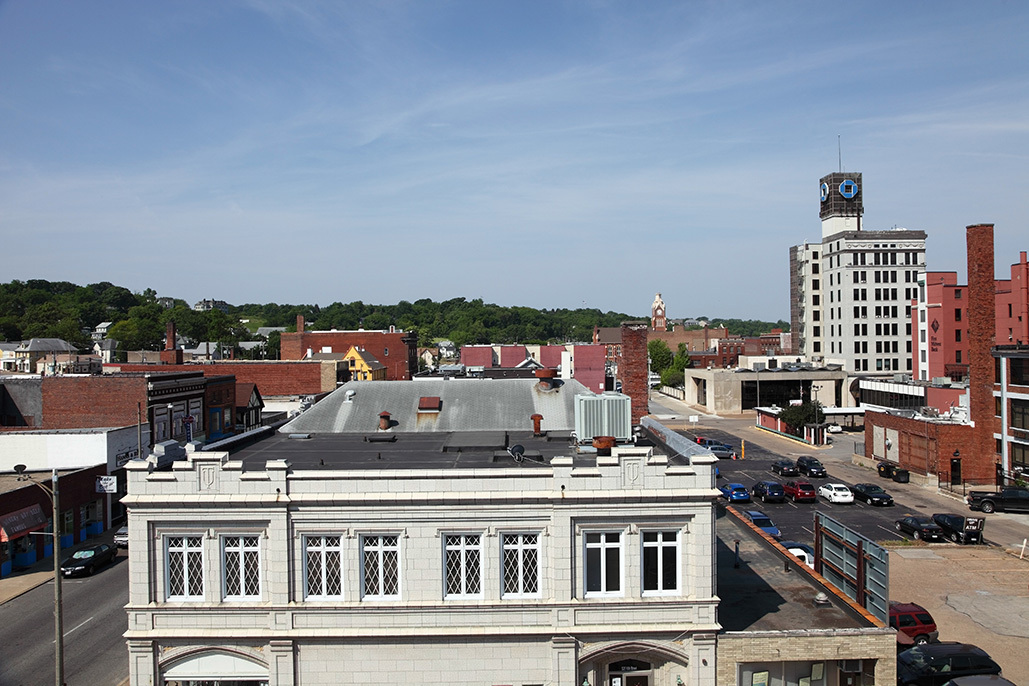 Moline ( moh-LEEN) is a city located in Rock Island County, Illinois, United States. With a population of 43,977 in 2010, it is the largest city in Rock Island County. Moline is one of the Quad Cities, along with neighboring East Moline and Rock Island in Illinois and the cities of Davenport and Bettendorf in Iowa. The Quad Cities have an estimated population of 381,342. The city is the ninth-most populated city in Illinois outside the Chicago Metropolitan Area. The corporate headquarters of Deere & Company is located in Moline, as was Montgomery Elevator, which was founded and headquartered in Moline until 1997, when it was acquired by Kone Elevator, which has its U.S. Division headquartered in Moline. Quad City International Airport, Niabi Zoo, Black Hawk College, and the Quad Cities campus of Western Illinois University-Quad Cities are located in Moline. Moline is a retail hub for the Illinois Quad Cities, as South Park Mall and numerous big-box shopping plazas are located in the city. In the mid-1990s, the city undertook major efforts to revitalize its central business district, which had declined after suburban growth and retail changes after the 1950s and 1960s. Today, Moline's downtown again serves as one of the civic and recreational hubs of the Quad Cities; many events take place at the 12,000-seat TaxSlayer Center (formerly known as The MARK of the Quad Cities and iWireless Center) and at John Deere Commons. Downtown Moline features hotels such as Radisson, The Element Moline, The Axis Hotel, and Stoney Creek Inn, along with commercial areas such as Bass Street Landing and the historic 5th Avenue. Moline acquired its name after it was platted (surveyed and planned) in 1843. The name derives from the French moulin meaning "mill town". 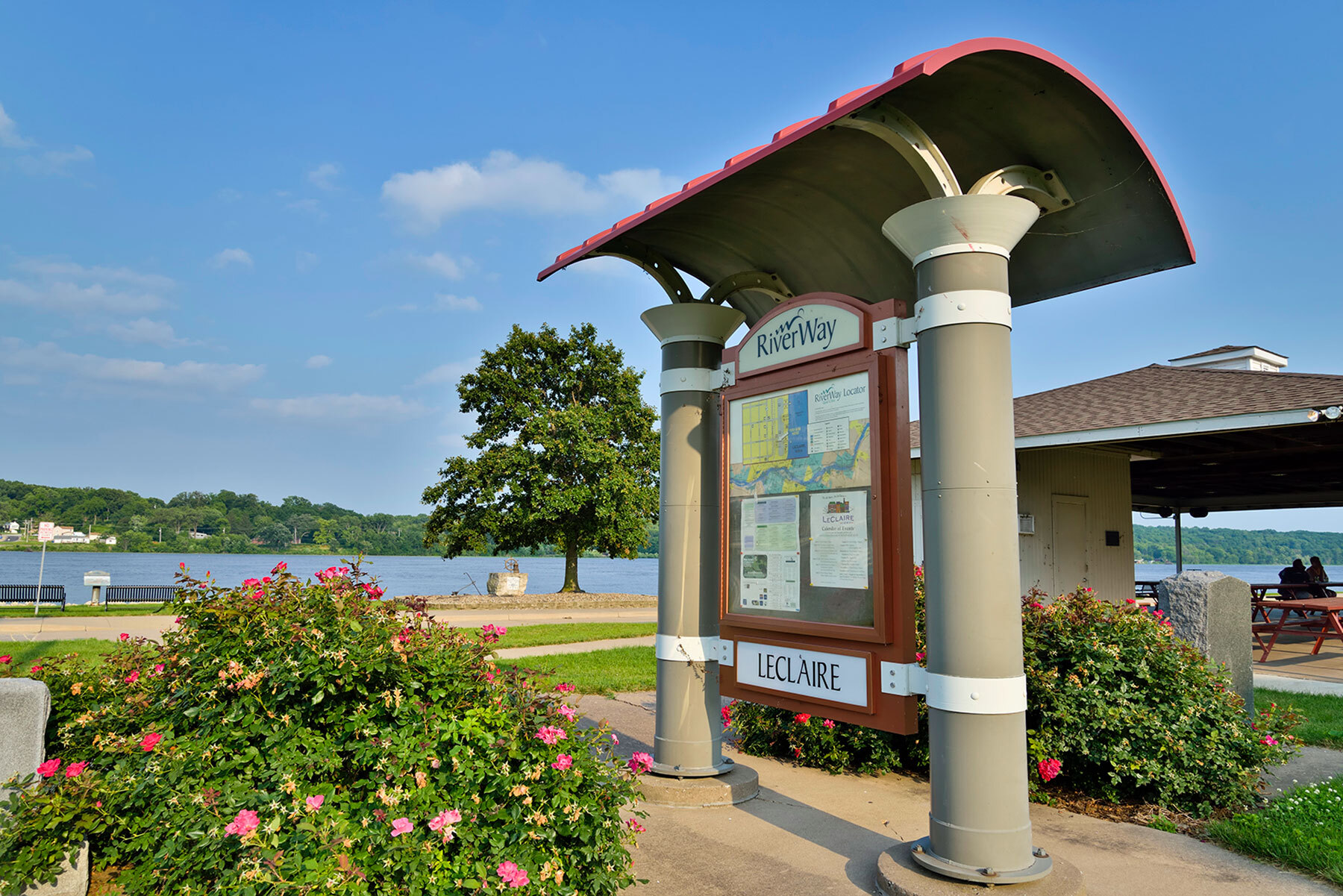 LeClaire is a city in Scott County, Iowa, United States. The population was 4,710 in 2020, a 65.4% increase from 2,847 in 2000, making it one of the fastest growing communities in the Quad Cities.LeClaire is considered a suburb and part of the Quad Cities Metropolitan Area, which include the area of Davenport and Bettendorf, Iowa, and Rock Island, Moline, and East Moline, Illinois. 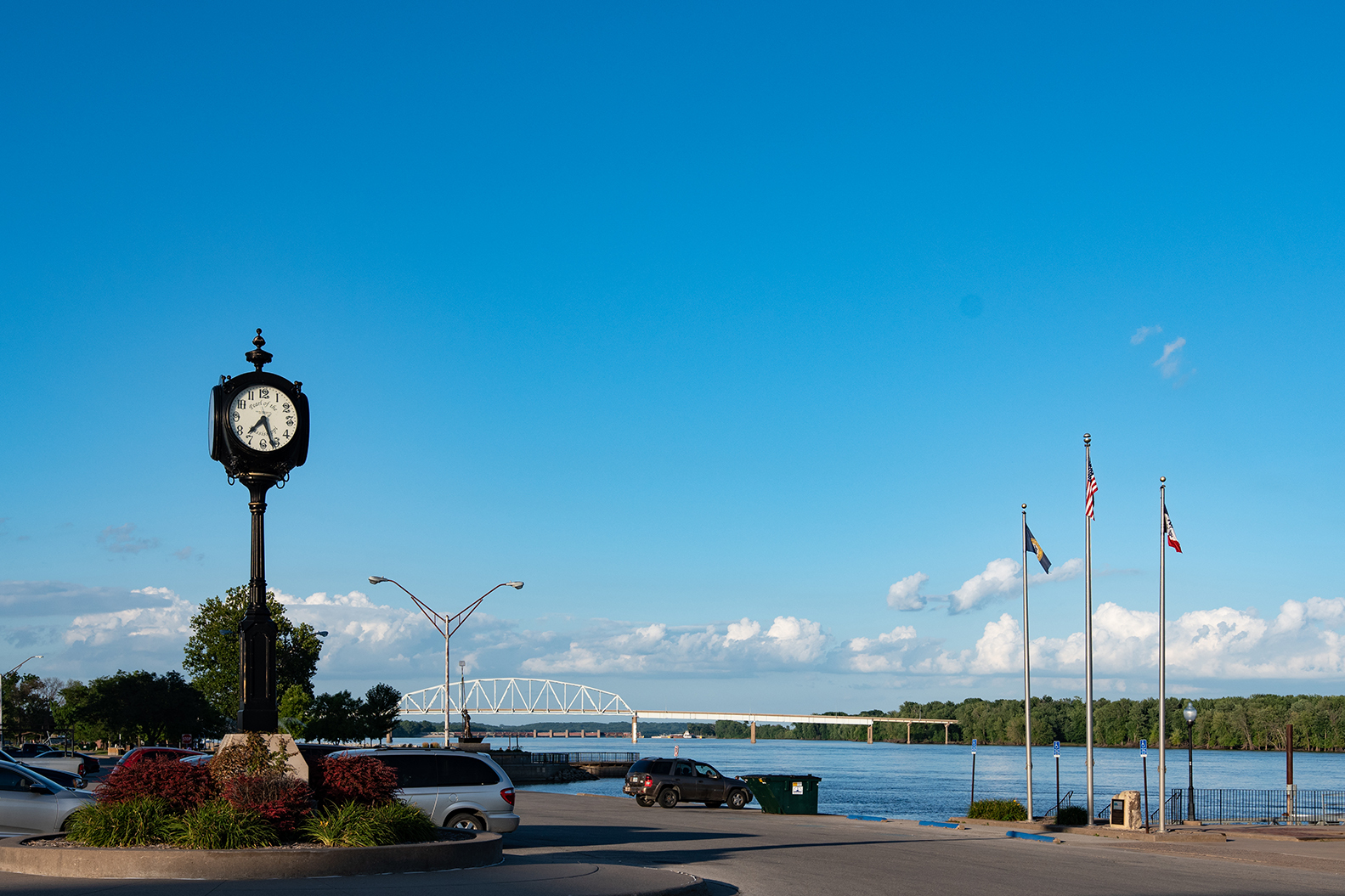 Muscatine is a city in Muscatine County, Iowa, United States. The population was 23,797 at the time of the 2020 census, an increase from 22,697 in 2000. The county seat of Muscatine County, it is located along the Mississippi River. The local business association states that the name Muscatine is not used by any other community.Muscatine is the principal city of the Muscatine Micropolitan Statistical Area (2010 census population 54,132) as of 2011 the estimate was 54,184, which includes all of Muscatine and Louisa counties, making it the 208th-largest micropolitan statistical area.

Clinton is a city in, and the county seat of, Clinton County, Iowa, United States. The population was 24,469 as of 2020. Clinton, along with DeWitt (also located in Clinton County), was named in honor of the sixth governor of New York, DeWitt Clinton. Clinton is the principal city of the Clinton Micropolitan Statistical Area, which is coterminous with Clinton County. Clinton was incorporated on January 26, 1857.