Wikipedia
Le Mars is the county seat of Plymouth County, Iowa, United States. It is located on the Floyd River northeast of Sioux City. The population was 10,571 at the time of the 2020 census. Le Mars is part of the Sioux City metropolitan area. 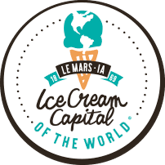 Find more things to do, itinerary ideas, updated news and events, and plan your perfect trip to Le Mars
ADVERTISEMENT

Sioux City () is a city in Woodbury and Plymouth counties in the northwestern part of the U.S. state of Iowa. The population was 85,791 in the 2020 census, which makes it the fourth-largest city in Iowa. The bulk of the city is in Woodbury County, of which it is the county seat, though a small portion is in Plymouth County. Sioux City is located at the navigational head of the Missouri River. The city is home to several cultural points of interest including the Sioux City Public Museum, Sioux City Art Center and Sergeant Floyd Monument, which is a National Historic Landmark. The city is also home to Chris Larsen Park, commonly referred to as "the Riverfront", which includes the Anderson Dance Pavilion, Sergeant Floyd Riverboat Museum and Lewis and Clark Interpretive Center. Sioux City is the primary city of the five-county Sioux City, IA–NE–SD Metropolitan Statistical Area (MSA), with a population of 168,825 in 2010 and a slight increase to an estimated 169,405 in 2018. The Sioux City–Vermillion, IA–NE–SD Combined Statistical Area had a population of 182,675 as of 2010 but had decreased to an estimated population of 178,448 as of 2018.Sioux City is at the navigational head, or the furthest upstream point to which general cargo ships can travel, of the Missouri River, approximately 95 miles (153 km) north of the Omaha–Council Bluffs metropolitan area. Sioux City and the surrounding areas of northwestern Iowa, northeastern Nebraska and southeastern South Dakota are sometimes referred to as Siouxland, especially by local media and residents. It is also a part of the Sioux Falls-Sioux City Designated Market Area (DMA), a larger media market region that covers parts of four states and has a population of 1,043,450.

South Sioux City is a city in Dakota County, Nebraska, United States. It is located immediately across the Missouri River from Sioux City, Iowa, and is part of the Sioux City, IA-NE-SD Metropolitan Statistical Area. As of the 2010 census, the city population was 13,353, making it the 14th largest city in Nebraska.

Vermillion (Lakota: Waséoyuze; "The Place Where Vermilion is Obtained") is a city in and the county seat of Clay County. It is located in the southeastern corner of South Dakota, United States and is the eleventh largest city in the state. According to the 2010 Census, the population was 10,571. The city lies atop a bluff near the Missouri River. The area has been home to Native American tribes for centuries. French fur traders first visited in the late 18th century. Vermillion was founded in 1859 and incorporated in 1873. The name refers to the Lakota name: wa sa wak pa'la (red stream). Home to the University of South Dakota, Vermillion has a mixed academic and rural character: the university is a major academic institution for the state, with its only law and medical schools and its only AACSB-accredited business school. Major farm products include corn, soybeans, and alfalfa.