Wikipedia
Mad Play (foaled 1921 in Kentucky) was an American-bred Thoroughbred racehorse. Bred by August Belmont, Jr., he was sired by Fair Play, who also sired Man o' War, out of a Rock Sand mare, Mad Cap. He was a full brother to 1921 U.S. Champion Older Male Horse Mad Hatter.
Find more things to do, itinerary ideas, updated news and events, and plan your perfect trip to Convington
ADVERTISEMENT 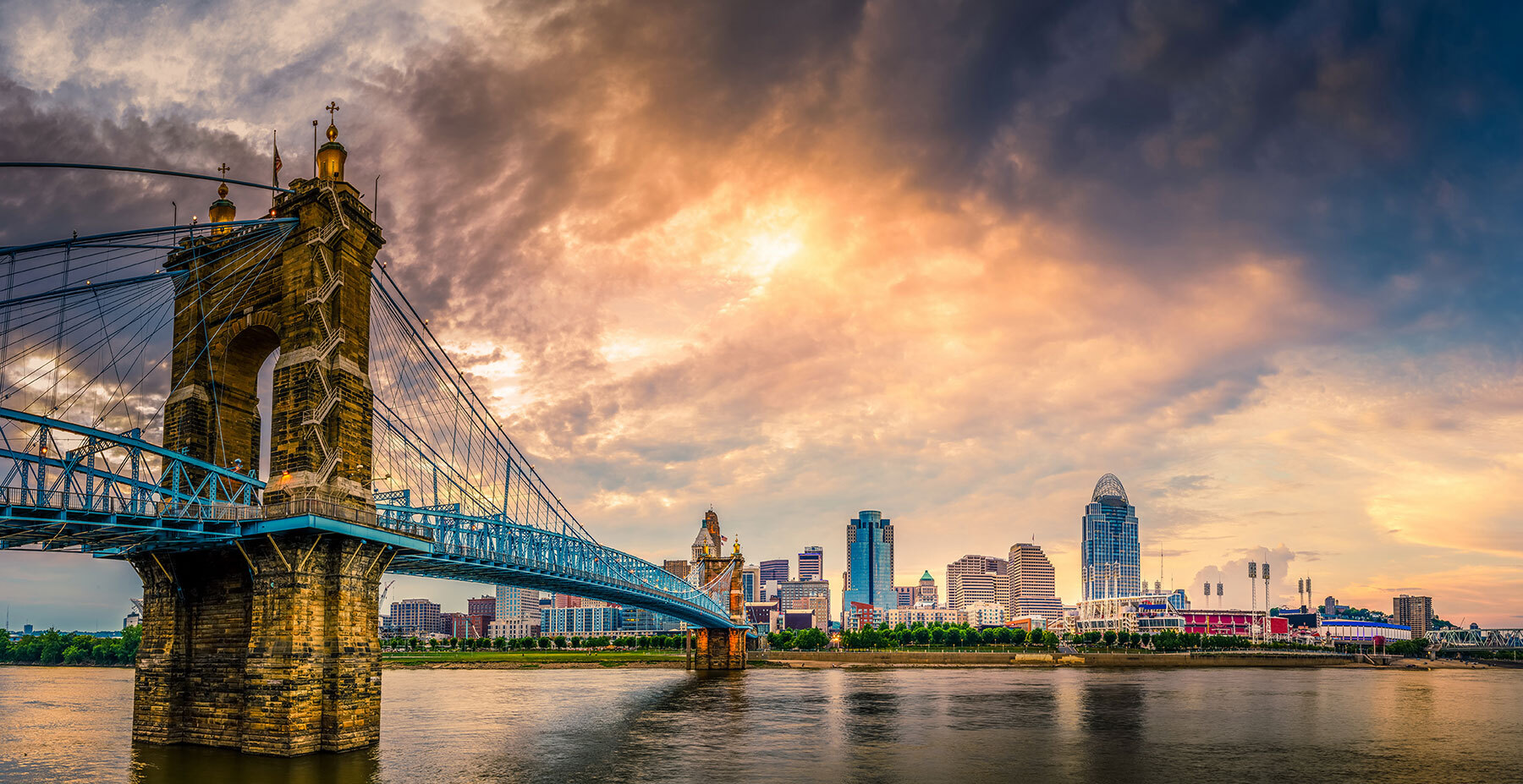 Cincinnati ( SIN-sin-NAT-ee) is a city in the U.S. state of Ohio and the county seat of Hamilton County. Settled in 1788, the city is located at the northern side of the confluence of the Licking and Ohio rivers, the latter of which marks the state line with Kentucky. The city is the economic and cultural hub of the Cincinnati metropolitan area. With an estimated population of 2,190,209, it is Ohio's largest metropolitan area and the nation's 29th-largest, and with a city population of 309,317, Cincinnati is the third-largest city in Ohio and 64th in the United States. Throughout much of the 19th century, it was among the top 10 U.S. cities by population, surpassed only by New Orleans and the older, established settlements of the United States eastern seaboard, as well as being the sixth-most populous city from 1840 until 1860. Cincinnati developed with fewer immigrants and less influence from Europe than East Coast cities in the same period. However, it received a significant number of German-speaking immigrants, who founded many of the city's cultural institutions. By the end of the 19th century, with the shift from steamboats to railroads drawing off freight shipping, trade patterns had altered and Cincinnati's growth slowed considerably. The city was surpassed in population by other inland cities, particularly Chicago, which developed based on strong commodity exploitation, economics, and the railroads, and St. Louis, which for decades after the Civil War served as the gateway to westward migration. Cincinnati is home to three major sports teams: the Cincinnati Reds of Major League Baseball; the Cincinnati Bengals of the National Football League; and FC Cincinnati of Major League Soccer; it is also home to the Cincinnati Cyclones, a minor league ice hockey team. The city's largest institution of higher education, the University of Cincinnati, was founded in 1819 as a municipal college and is now ranked as one of the 50 largest in the United States. Cincinnati is home to historic architecture with many structures in the urban core having remained intact for 200 years. In the late 1800s, Cincinnati was commonly referred to as the "Paris of America", due mainly to such ambitious architectural projects as the Music Hall, Cincinnatian Hotel, and Shillito Department Store. Cincinnati is the birthplace of William Howard Taft, the 27th President of the United States.

Most individual U.S. states collect a state income tax in addition to federal income tax. The two are separate entities. Some local governments also impose an income tax, often based on state income tax calculations. Forty-two states and many localities in the United States impose an income tax on individuals. Eight states impose no state income tax, and a ninth, New Hampshire, imposes an individual income tax on dividends and interest income but not other forms of income. Forty-seven states and many localities impose a tax on the income of corporations.State income tax is imposed at a fixed or graduated rate on taxable income of individuals, corporations, and certain estates and trusts. The rates vary by state. Taxable income conforms closely to federal taxable income in most states, with limited modifications. The states are prohibited from taxing income from federal bonds or other obligations. Most do not tax Social Security benefits or interest income from obligations of that state. Several states require different useful lives and methods be used by businesses in computing the deduction for depreciation. Many states allow a standard deduction or some form of itemized deductions. States allow a variety of tax credits in computing tax. Each state administers its own tax system. Many states also administer the tax return and collection process for localities within the state that impose income tax. State income tax is allowed as a deduction in computing federal income tax, subject to limitations for individuals.

Dirt track racing is the single most common form of auto racing in the United States. According to the National Speedway Directory there are over 700 dirt oval tracks in operation in the United States.The composition of the dirt on tracks has an effect on the amount of grip available. On many tracks people will find clay is used with a specific mixture of dirt. Tracks are sometimes banked in the turns and on the straights. This banking is utilized primarily to allow vehicles to carry more speed through the corners. However, some tracks prefer less banked turns. Each track surface will most often be different in one way or another.