Wikipedia
St. Mary's County, established in 1637, is a county located in the U.S. state of Maryland. As of the 2010 census, the population was 105,151. Its county seat is Leonardtown. The name is in honor of Mary, the mother of Jesus.St. Mary's County comprises the California-Lexington Park, Maryland Metropolitan Statistical Area, which also is included in the Washington-Baltimore-Arlington, DC-MD-VA-WV-PA Combined Statistical Area. It is part of the Southern Maryland region. The county was the home to the first Maryland Colony, and the first capitol of the Colony of Maryland. Settled by English Catholics, it is considered to be the birthplace of religious freedom in North America, at a time when the British colonies were settled primarily by Protestants.The county is home to the Patuxent River Naval Air Station and St. Mary's College of Maryland. Traditionally, St. Mary's County has been known for its unique and historic culture of Chesapeake Bay tidewater farming, fishing, and crabbing communities. But with the advent of the military bases, growth of an extensive defense contractor presence, and the growth of St. Mary's College of Maryland, as well as increasing numbers of long-distance Washington, D.C. commuters, it has been undergoing a decades-long transformation which has seen the county's population double since 1970. 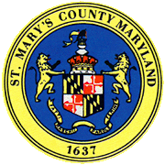 Leonardtown is a town in and the county seat of St. Mary's County, Maryland, United States. The population was 2,930 at the 2010 census. Leonardtown is perhaps most famous for the national oyster-shucking championship that is held annually at the St. Mary's County fairgrounds. Historic Leonardtown includes both a large public high school and a public middle school Leonardtown Middle School as well as a Catholic high school and an elementary school Leonardtown Elementary School, offices of the county government, and St. Mary's Hospital which serves the healthcare needs of the county. The College of Southern Maryland maintains a growing satellite campus within city limits, including an aquatic center. An upscale home development located in the Breton Bay area is just outside town, notable for both its country club golf course and swimming pool. Leonardtown's population has grown significantly since 1990 as a result of the town's proximity to Patuxent River Naval Air Station and the Washington metro area.

The Northern Neck is the northernmost of three peninsulas (traditionally called "necks" in Virginia) on the western shore of the Chesapeake Bay in the Commonwealth of Virginia (the other two are the Middle Peninsula and the Virginia Peninsula). This peninsula is bounded by the Potomac River on the north and the Rappahannock River on the south. It encompasses the following Virginia counties: Lancaster, Northumberland, Richmond, and Westmoreland, and had a population of 50,158 as of the 2020 census.The inclusion of King George County in the Northern Neck varies among commentators. Historically, the grant for the Northern Neck included all land between the Rappahannock and Potomac rivers, including far upstream of King George County—some 5 million acres. The boundaries of King George and Westmoreland counties have changed radically since their establishment, with significant exchanges of territory. Significant portions of the early King George County lay in what is now Westmoreland County.

Somerset County is the southernmost county in the U.S. state of Maryland. As of the 2020 census, the population was 24,620, making it the second-least populous county in Maryland. The county seat is Princess Anne.The county was named for Mary, Lady Somerset, the wife of Sir John Somerset and daughter of Thomas Arundell, 1st Baron Arundell of Wardour (c. 1560–1639). She was also the sister of Anne Calvert, Baroness Baltimore (1615–1649), who later lent her name to Anne Arundel County, which was erected in 1650 as the Province of Maryland's third county. Somerset County is located on the state's Eastern Shore. It is included in the Salisbury, MD-DE Metropolitan Statistical Area. The University of Maryland Eastern Shore is located in Princess Anne.

James H. Freis Jr. (born October 27, 1970, in Aberdeen, Maryland) is an American lawyer and financial industry executive who from 2007 to 2012 served as the United States Department of the Treasury's 6th Director of the Financial Crimes Enforcement Network (FinCEN), where he expanded the scope of the anti-money laundering regulations and became known for spearheading efforts to combat fraud and implementing modern data analysis. He was an attorney and central banker at the Federal Reserve Bank of New York and the Bank for International Settlements. From 2014 to 2020, he was Group Chief Compliance Officer of the Deutsche Börse Group, Europe's largest provider of systemically significant financial market infrastructures. In June 2020, he joined Wirecard AG, where he is credited for promptly exposing and stopping the largest financial fraud in Germany's modern history, known publicly as the Wirecard scandal.

The New Hampshire inn made for cozy retreats - $179