Wikipedia
Franconia Notch (elev. 1,950 feet/590 m) is a major mountain pass through the White Mountains of New Hampshire. Dominated by Cannon Mountain to the west and Mount Lafayette to the east, it lies principally within Franconia Notch State Park and is traversed by the Franconia Notch Parkway (Interstate 93 and U.S. Route 3). The parkway required a special act of Congress to sidestep design standards for the Interstate highway system because it is only one lane in each direction.The notch was home to the Old Man of the Mountain, a rock formation which collapsed in 2003 but whose profile remains a symbol of the state of New Hampshire. The notch is located primarily in the town of Franconia but extends south into Lincoln. It is bordered to the east by Franconia Ridge, comprising Mount Lafayette (5,249 feet/1,600 m), Mount Lincoln (5,089 feet/1,551 m), and Little Haystack Mountain (4,780 feet/1,460 m), and to the west by 4,080-foot (1,240 m) Cannon Mountain and the sheer face of Cannon Cliff. The notch's height of land is located near its northern end, at the base of Cannon Mountain. Echo Lake lies just north of the high point of the notch, with an outlet that flows into Lafayette Brook, then the Gale River, the Ammonoosuc River, and finally the Connecticut River, which enters Long Island Sound at Old Saybrook, Connecticut. Just south of the height of land, Profile Lake lies beneath the cliff that once held the Old Man of the Mountain. Profile Lake is the source of the Pemigewasset River, the primary tributary of the Merrimack River, which flows to the Gulf of Maine at Newburyport, Massachusetts. 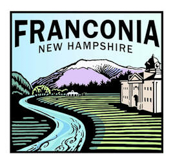 Find more things to do, itinerary ideas, updated news and events, and plan your perfect trip to Franconia Notch
ADVERTISEMENT

Littleton is a town in Grafton County, New Hampshire, United States. The population was 5,928 at the 2010 census. Situated at the northern edge of the White Mountains, Littleton is bounded on the northwest by the Connecticut River. The primary settlement in town, where 4,412 people lived at the 2010 census, is defined as the Littleton census-designated place (CDP), and is centered on the intersection of U.S. Route 302 with New Hampshire Route 116, along the Ammonoosuc River.

Waterville Valley is a town in Grafton County, New Hampshire, United States. The population was 247 at the 2010 census.Waterville Valley attracts many visitors in the winter months with alpine skiing at Waterville Valley Resort and many miles of trails for cross-country skiing. During the summer, attractions include a golf course, tennis courts, and a variety of hiking options. The Mad River flows through the town, providing great views all year round.