Wikipedia
New York, often called New York City to distinguish it from New York State, or NYC for short, is the most populous city in the United States. With a 2020 population of 8,804,190 distributed over 300.46 square miles (778.2 km2), New York City is also the most densely populated major city in the United States. Located at the southern tip of the State of New York, the city is the center of the New York metropolitan area, the largest metropolitan area in the world by urban area. With over 20 million people in its metropolitan statistical area and approximately 23 million in its combined statistical area, it is one of the world's most populous megacities. New York City has been described as the cultural, financial, and media capital of the world, significantly influencing commerce, entertainment, research, technology, education, politics, tourism, art, fashion, and sports, and is the most photographed city in the world. Home to the headquarters of the United Nations, New York is an important center for international diplomacy, and has sometimes been called the capital of the world.Situated on one of the world's largest natural harbors, New York City is composed of five boroughs, each of which is coextensive with a respective county of the State of New York. The five boroughs—Brooklyn (Kings County), Queens (Queens county), Manhattan (New York County), the Bronx (Bronx county), and Staten Island (Richmond County)—were created when local governments were consolidated into a single municipal entity in 1898. The city and its metropolitan area constitute the premier gateway for legal immigration to the United States. As many as 800 languages are spoken in New York, making it the most linguistically diverse city in the world. New York is home to more than 3.2 million residents born outside the United States, the largest foreign-born population of any city in the world as of 2016. As of 2019, the New York metropolitan area is estimated to produce a gross metropolitan product (GMP) of $2.0 trillion. If the New York metropolitan area were a sovereign state, it would have the eighth-largest economy in the world. New York is home to the highest number of billionaires of any city in the world.New York City traces its origins to a trading post founded on the southern tip of Manhattan Island by Dutch colonists in approximately 1624. The settlement was named New Amsterdam (Dutch: Nieuw Amsterdam) in 1626 and was chartered as a city in 1653. The city came under English control in 1664 and was renamed New York after King Charles II of England granted the lands to his brother, the Duke of York. The city was regained by the Dutch in July 1673 and was renamed New Orange for one year and three months; the city has been continuously named New York since November 1674. New York City was the capital of the United States from 1785 until 1790, and has been the largest U.S. city since 1790. The Statue of Liberty greeted millions of immigrants as they came to the U.S. by ship in the late 19th and early 20th centuries, and is a symbol of the U.S. and its ideals of liberty and peace. In the 21st century, New York has emerged as a global node of creativity, entrepreneurship, and environmental sustainability, and as a symbol of freedom and cultural diversity. In 2019, New York was voted the greatest city in the world per a survey of over 30,000 people from 48 cities worldwide, citing its cultural diversity.Many districts and monuments in New York City are major landmarks, including three of the world's ten most visited tourist attractions in 2013. A record 66.6 million tourists visited New York City in 2019. Times Square is the brightly illuminated hub of the Broadway Theater District, one of the world's busiest pedestrian intersections, and a major center of the world's entertainment industry. Many of the city's landmarks, skyscrapers, and parks are known around the world. The Empire State Building has become the global standard of reference to describe the height and length of other structures. Manhattan's real estate market is among the most expensive in the world. Providing continuous 24/7 service and contributing to the nickname The City That Never Sleeps, the New York City Subway is the largest single-operator rapid transit system worldwide, with 472 rail stations. The city has over 120 colleges and universities, including Columbia University, New York University, Rockefeller University, and the City University of New York system, which is the largest urban public university system in the United States. Anchored by Wall Street in the Financial District of Lower Manhattan, New York City has been called both the world's leading financial center and the most financially powerful city in the world, and is home to the world's two largest stock exchanges by total market capitalization, the New York Stock Exchange and NASDAQ.
Find more things to do, itinerary ideas, updated news and events, and plan your perfect trip to Central NY
ADVERTISEMENT 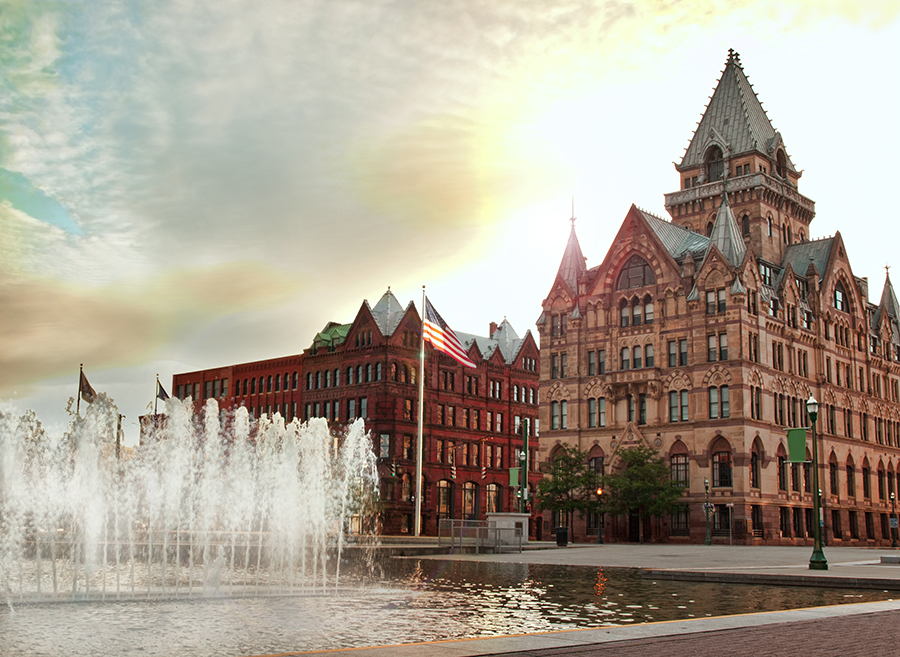 Syracuse () is a city in and the county seat of Onondaga County, New York, United States. It is the fifth-most populous city in the state of New York following New York City, Buffalo, Yonkers and Rochester. At the 2020 census, the city population was 148,620 and its metropolitan area had a population of 662,057. It is the economic and educational hub of Central New York, a region with over one million inhabitants. Syracuse is also well-provided with convention sites, with a downtown convention complex. Syracuse was named after the classical Greek city Syracuse (Siracusa in Italian), a city on the eastern coast of the Italian island of Sicily. Historically, the city has functioned as a major crossroads over the last two centuries, first between the Erie Canal and its branch canals, then of the railway network. Today, Syracuse is at the intersection of Interstates 81 and 90. Its airport is the largest in the region. Syracuse is home to Syracuse University, State University of New York Upstate Medical University, SUNY College of Environmental Science & Forestry, and Le Moyne College.

Madison County is a county located in the U.S. state of New York. As of the 2020 census, the population was 68,016. Its county seat is Wampsville. The county is named after James Madison, the fourth president of the United States, and was first formed in 1806. Madison County is part of the Syracuse metropolitan area.