Wikipedia
Akron () is the fifth-largest city in the U.S. state of Ohio and is the county seat of Summit County. It is located on the western edge of the Glaciated Allegheny Plateau, about 40 miles (64 km) south of downtown Cleveland. As of the 2019 Census estimate, the city proper had a total population of 197,597, making it the 125th largest city in the United States. The Greater Akron area, covering Summit and Portage counties, had an estimated population of 703,505.The city was founded in 1825 by Simon Perkins and Paul Williams, along the Little Cuyahoga River at the summit of the developing Ohio and Erie Canal. The name is derived from the Greek word signifying a summit or high point. It was briefly renamed South Akron after Eliakim Crosby founded nearby North Akron in 1833, until both merged into an incorporated village in 1836. In the 1910s, Akron doubled in population, making it the nation's fastest-growing city. A long history of rubber and tire manufacturing, carried on today by The Goodyear Tire & Rubber Company, gave Akron the nickname "Rubber Capital of the World". It was once known as a center of airship development. Today, its economy includes manufacturing, education, healthcare, and biomedical research; leading corporations include Gojo Industries, FirstEnergy, Huntington Bank, and Charter Spectrum. Notable historic events in Akron include the passage of the Akron School Law of 1847, which created the K–12 system; the popularization of the church architectural Akron Plan, the foundation of Alcoholics Anonymous, the Akron Experiment into preventing goiters with iodized salt, the 1983 Supreme Court case City of Akron v. Akron Center for Reproductive Health; and portions of the 2014 Gay Games. A racially diverse city, it has seen noted racial relations speeches by Sojourner Truth in 1851—the Ain't I A Woman? speech; W. E. B. Du Bois in 1920; and President Bill Clinton in 1997. In 1914, Marcus Garvey founded the Universal Negro Improvement Association in Akron. Episodes of major civil unrest in Akron have included the riot of 1900, rubber strike of 1936, and the Wooster Avenue riots of 1968. Notable individuals from the city include the basketball players LeBron James and Stephen Curry.
Find more things to do, itinerary ideas, updated news and events, and plan your perfect trip to Akron
ADVERTISEMENT

Kent is a city in the U.S. state of Ohio and the largest city in Portage County. It is located along the Cuyahoga River in Northeast Ohio on the western edge of the county. The population was 28,904 in the 2010 Census and was estimated at 29,646 in 2019. The city is counted as part of the Akron Metropolitan Statistical Area and the larger Cleveland–Akron–Canton Combined Statistical Area. Part of the Connecticut Western Reserve, Kent was settled in 1805 and was known for many years as Franklin Mills. Settlers were attracted to the area due to its location along the Cuyahoga River as a place for water-powered mills. Later development came in the 1830s and 1840s as a result of the settlement's position along the route of the Pennsylvania and Ohio Canal. Leading up to the American Civil War, Franklin Mills was noted for its activity in the Underground Railroad. With the decline of the canal and the emergence of the railroad, the town became the home of the Atlantic and Great Western Railroad maintenance shops through the influence of Marvin Kent. In 1864 the town was renamed Kent in honor of and in gratitude for Marvin Kent's efforts. It was incorporated as a village in 1867 and became a city after the 1920 Census. Today Kent is a college town best known as the home of the main campus of Kent State University, founded in 1910, and as the site of the 1970 Kent State shootings. Historically a manufacturing center, education is the city's largest economic sector with Kent State University being the city's, and one of the region's, largest employers. The Kent City School District and the Kent Free Library provide additional education opportunities and resources. Many of Kent's demographic elements are influenced by the presence of the university, particularly the median age, median income, and those living below the poverty level. The city is governed by a council-manager system with a city manager, a nine-member city council, and a mayor. Kent has nearly 20 parks and preserves and hosts a number of annual festivals including ones related to Earth Day, folk music, and the U.S. Independence Day. In addition to the Kent State athletic teams, the city also hosts a number of amateur and local sporting events at various times during the year. Kent is part of the Cleveland-Akron media market and is the city of license for three local radio stations and three television stations and includes the regional affiliates for National Public Radio (NPR) and the Public Broadcasting Service (PBS). Local transportation infrastructure includes a public bus service and hike-and-bike trails. As the home of the Davey Tree Expert Company, Kent is known as "The Tree City" while residents are referred to as "Kentites". The city has produced a number of notable individuals, particularly in politics, athletics, and the entertainment industry.

Streetsboro is a city in Portage County, Ohio, United States. It is formed from the former township of Streetsboro, which was formed from the Connecticut Western Reserve. It is nearly co-extant with the former Streetsboro Township; the village of Sugar Bush Knolls was also formed in part from a small portion of the former township. Its population was 12,311 at the 2000 census and 16,028 at the 2010 census. It is part of the Akron Metropolitan Statistical Area. 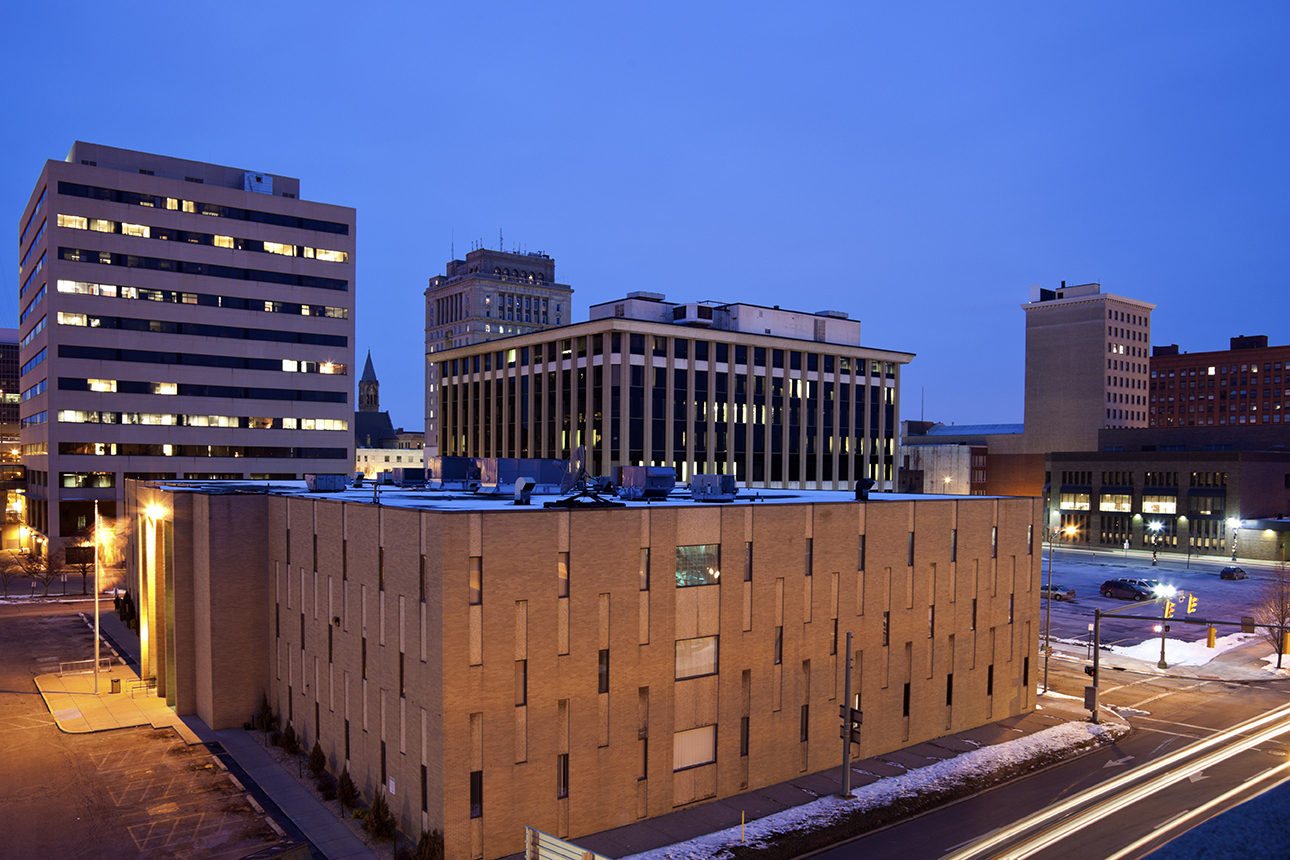 Canton () is a city in and the county seat of Stark County, Ohio, United States. It is located approximately 60 miles (97 km) south of Cleveland and 20 miles (32 km) south of Akron in Northeast Ohio. The city lies on the edge of Ohio's extensive Amish country, particularly in Holmes and Wayne counties to the city's west and southwest. Canton is the largest municipality in the Canton-Massillon, OH Metropolitan Statistical Area, which includes all of Stark and Carroll counties. As of the 2020 Census, the population was 70,872, making Canton eighth among Ohio cities in population. Founded in 1805 alongside the Middle and West Branches of Nimishillen Creek, Canton became a heavy manufacturing center because of its numerous railroad lines. However, its status in that regard began to decline during the late 20th century, as shifts in the manufacturing industry led to the relocation or downsizing of many factories and workers. After this decline, the city's industry diversified into the service economy, including retailing, education, finance and healthcare. Canton is chiefly notable for being the home of the Pro Football Hall of Fame and the birthplace of the National Football League. 25th U.S. President William McKinley conducted the famed front porch campaign, which won him the presidency of the United States in the 1896 election, from his home in Canton. The McKinley National Memorial and the William McKinley Presidential Library and Museum commemorate his life and presidency. Canton was also chosen as the site of the First Ladies National Historic Site largely in honor of his wife, Ida Saxton McKinley. Beginning in 2015, Canton began experiencing an urban renaissance, anchored by its growing and thriving arts district centrally located in the downtown area. Several historic buildings have been rehabilitated and converted into upscale lofts, attracting hundreds of new downtown residents into the city. Furthering this downtown development, in June 2016, Canton became one of the first cities in Ohio to allow the open consumption of alcoholic beverages in a "designated outdoor refreshment area" pursuant to a state law enacted in 2015 (Sub. H.B. No. 47).

Medina County (pronounced ) is a county in the U.S. state of Ohio. As of the 2020 census, the population was 182,470. Its county seat is Medina. The county was created in 1812 and later organized in 1818. It is named for Medina, a city in Saudi Arabia.Medina County is part of the Cleveland-Elyria, OH Metropolitan Statistical Area, although parts of the county are included in the urbanized area of Akron.