Wikipedia
Baker City is a city in and the county seat of Baker County, Oregon, United States. It was named after Edward D. Baker, the only U.S. Senator ever killed in military combat. The population was 9,828 at the time of the 2010 census. 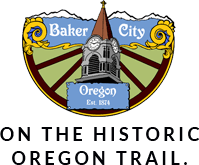 Find more things to do, itinerary ideas, updated news and events, and plan your perfect trip to Baker
ADVERTISEMENT

Union County is one of the 36 counties in the U.S. state of Oregon. As of the 2010 census, the population was 25,748. Its county seat is La Grande.Union County comprises the La Grande, OR Micropolitan Statistical Area. It is one of the eight counties of eastern Oregon.

This is a complete List of National Historic Landmarks in Oregon. The United States National Historic Landmark (NHL) program is operated under the auspices of the National Park Service, and recognizes buildings, structures, districts, objects, and similar resources nationwide according to a list of criteria of national significance. The state of Oregon is home to 17 of these landmarks, two of which extend beyond Oregon's borders into other states, as well as one site from which NHL status was withdrawn upon its destruction.

Eastern Oregon is the eastern part of the U.S. state of Oregon. It is not an officially recognized geographic entity; thus, the boundaries of the region vary according to context. It is sometimes understood to include only the eight easternmost counties in the state; in other contexts, it includes the entire area east of the Cascade Range. Cities in the basic eight-county definition include Baker City, Burns, Hermiston, Pendleton, John Day, La Grande, and Ontario. Umatilla County is home to the largest population base in Eastern Oregon; accounting for 42% of the region's residents. Hermiston, located in Umatilla County, is the largest city in the region, accounting for 10% of Eastern Oregon's residents. Major industries include transportation/warehousing, timber, agriculture and tourism. The main transportation corridors are I-84, U.S. Route 395, U.S. Route 97, U.S. Route 26, U.S. Route 30, and U.S. Route 20. Compared to the climate of Western Oregon, the climate of Eastern Oregon is a drier continental climate, with much greater seasonal variations in temperature. Unlike the Willamette Valley, Eastern Oregon receives a significant amount of snow in the winter. Some parts of Eastern Oregon receive fewer than 10 inches (250 mm) of rain yearly, classifying them as deserts. This desert climate is in part due to a rain shadow effect caused by the Cascade Range. Pine and juniper forests cover 35% of Eastern Oregon, much in the mountains that include the Blue Mountains, Strawberry Mountains, Wallowa Mountains, Trout Creek Mountains, Ochoco Mountains, and Steens Mountain. Volcanic basalt flows from the Columbia River Basalt Group covered large sections of Eastern Oregon 6 to 17 million years ago. Other landforms include the Alvord Desert, Owyhee Desert, Warner Valley, Deschutes River, Owyhee River, Grande Ronde River, Joseph Canyon, The Honeycombs, and Malheur Butte.