Wikipedia
Lackawanna County (/ɫækəˈwɑnə/ ; Lenape: Lèkaohane) is a county in the U.S. state of Pennsylvania. As of the 2010 census, the population was 214,437. Its county seat and largest city is Scranton.The county was created on August 13, 1878, following decades of trying to gain its independence from Luzerne County. (The courts were organized in October 1878.) It is Pennsylvania's last county to be created, and the only county to be created after the Civil War. It is named for the Lackawanna River.Lackawanna County is included in the Scranton–Wilkes-Barre–Hazleton, PA Metropolitan Statistical Area ("Wyoming Valley"). It is the second-largest county within the metropolitan area. It lies northwest of the Pocono Mountains. Lackawanna County is located approximately 40 miles (64 km) from the New Jersey border in Montague, New Jersey, and also located approximately 33 miles (53 km) from upstate New York in Windsor, New York. 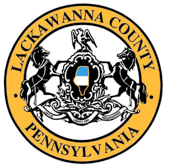 Find more things to do, itinerary ideas, updated news and events, and plan your perfect trip to Lackawanna County
ADVERTISEMENT

Moosic ( MOO-zik) is a borough in Lackawanna County, Pennsylvania, 6 miles (10 km) south of downtown Scranton and 13 miles (21 km) northeast of downtown Wilkes-Barre, on the Lackawanna River. Moosic is in a former coal-mining region. A few older industries existed at one time, including the manufacturing of canvas gloves and silk products. The population was 5,719 at the 2010 census.

Luzerne County is a county in the Commonwealth of Pennsylvania. According to the U.S. Census Bureau, the county has a total area of 906 square miles (2,350 km2), of which 890 square miles (2,300 km2) is land and 16 square miles (41 km2) is water. It is Northeastern Pennsylvania's second-largest county by total area. As of the 2010 census, the population was 320,918, making it the most populous county in the northeastern part of the state. The county seat and largest city is Wilkes-Barre. Other populous communities include Hazleton, Kingston, Nanticoke, and Pittston. Luzerne County is included in the Scranton–Wilkes-Barre–Hazleton Metropolitan Statistical Area, which has a total population of 555,426 (as of 2017). On September 25, 1786, Luzerne County was formed from part of Northumberland County. It was named after Chevalier de la Luzerne, a French soldier and diplomat during the 18th century. When it was founded, Luzerne County occupied a large portion of Northeastern Pennsylvania. From 1810 to 1878, it was divided into several smaller counties. The counties of Bradford, Lackawanna, Susquehanna, and Wyoming were all formed from parts of Luzerne County.The county gained prominence in the 19th and 20th centuries as an active anthracite coal mining region, drawing a large portion of its labor force from European immigrants. At its peak (in 1930), the county's population was 445,109. By the early 21st century, many factories and coal mines were closed. Like most counties in the Rust Belt, Luzerne witnessed population loss and urban decay.

Wilkes-Barre ( or ) is a city in the U.S. state of Pennsylvania and the county seat of Luzerne County. Located at the center of the Wyoming Valley, it had an estimated population of 40,766 in 2019. It is the second-largest city (after Scranton) of the Scranton–Wilkes-Barre–Hazleton, PA Metropolitan Statistical Area, which had a population of 563,631 as of the 2010 Census and is the fourth-largest metropolitan area in Pennsylvania. Wilkes-Barre and the surrounding Wyoming Valley are framed by the Pocono Mountains to the east, the Endless Mountains to the north and west, and the Lehigh Valley to the south. The Susquehanna River flows through the center of the valley and defines the northwestern border of the city. Wilkes-Barre was founded in 1769 and formally incorporated in 1806. The city grew rapidly in the 19th century after the discovery of nearby coal reserves and the arrival of hundreds of thousands of immigrants who provided a labor force for the local mines. The coal mining fueled industrialization in the city, which reached the height of its prosperity in the first half of the 20th century. Its population peaked at more than 86,000 in 1930. Following World War II, the city's economy declined due to the collapse of industry. The Knox Mine disaster accelerated this trend after large portions of the area's coal mines were flooded and could not be reopened. Today, the city has around half of its peak population of the 1930s, making it the largest city in Luzerne County and the 13th-largest city in Pennsylvania.

Stroudsburg is a borough in Monroe County, Pennsylvania, United States. It is in the state's Poconos region, approximately five miles (8 km) from the Delaware Water Gap, at the confluence of the Brodhead, McMichaels and Pocono Creeks. It is in northeastern Pennsylvania. It is also the county seat of Monroe County. Stroudsburg is part of the East Stroudsburg, PA Metropolitan Statistical Area, which in turn is part of the New York combined statistical area. The population was 5,567 at the 2010 census.