Wikipedia
Chester County is a county located in the U.S. state of South Carolina. As of the 2010 census, its population was 33,140. Its county seat is Chester.Chester County is included in the Charlotte-Concord-Gastonia, NC-SC Metropolitan Statistical Area. 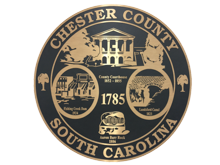 Find more things to do, itinerary ideas, updated news and events, and plan your perfect trip to Chester County
ADVERTISEMENT

Rock Hill is the largest city in York County, South Carolina, United States, and the fifth-largest city in the state. It is also the fourth-largest city of the Charlotte metropolitan area, behind Charlotte, Concord, and Gastonia (all located in North Carolina, unlike Rock Hill). As of the 2010 Census, the population was 66,154. In 2019, the population had increased to 75,048. As of 2017, the total population of the Rock Hill Census County Division was estimated at 117,375 people.The city is located approximately 25 miles (40 km) south of Charlotte and approximately 70 miles (110 km) north of Columbia. Rock Hill offers scenic riverfront views along the Catawba River and is home to numerous nature trails, restaurants, and thirty-one parks which are used for both national and local events. Its historic downtown consist of twelve contiguous buildings built as early as 1840 offering dining and retail options. The city is also home to three colleges, including Winthrop University, a public liberal arts university founded in 1886 which enrolls nearly 6,000 students annually.

York County is a county in the U.S. state of South Carolina. As of the 2010 United States Census, the population was 226,073. Its county seat is the city of York, and its largest city is Rock Hill. The county is served by one interstate highway, I-77. York County is part of the Charlotte-Concord-Gastonia Metropolitan Statistical Area.

Blythewood is a suburb of Columbia, South Carolina, in Richland and Fairfield counties, South Carolina. 2020 estimates put the population at 4,446 up from 2,034 in 2010. Since 2000 it has had a population boom, going from 170 people in 2000 to a population of 2,034 in 2010, representing an increase of 1096%. It is part of the Columbia, South Carolina, Metropolitan Statistical Area. It is located around 15 miles (24 kilometers) from downtown Columbia. Blythewood Road is one of the main thoroughfares, intersecting Interstate 77 at Exit 27. U.S. Route 21 also goes through Blythewood, Intersecting Interstate 77 At Exit 24.

Union County is a county located in the U.S. state of North Carolina. As of the 2010 census, the population was 201,292. Its county seat is Monroe. Union County is included in the Charlotte-Concord-Gastonia, NC-SC Metropolitan Statistical Area.