Wikipedia
Lynchburg is a city in the south-central region of the U.S. state of Tennessee. It is governed by a consolidated city-county government unit whose boundaries coincide with those of Moore County. Lynchburg is best known as the location of Jack Daniel's, whose famous Tennessee whiskey is marketed worldwide as the product of a city with only one traffic light. Despite the operational distillery, which is a major tourist attraction, Lynchburg's home county of Moore is a dry county. The population was 6,362 at the 2010 census. Lynchburg's connection to Jack Daniel's is spoofed in a 2018 national television commercial in which the city is nominated for an NBA franchise.Lynchburg is part of the Tullahoma-Manchester micropolitan area. The downtown area is listed on the National Register of Historic Places as the Lynchburg Historic District. 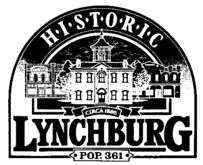 Find more things to do, itinerary ideas, updated news and events, and plan your perfect trip to Lynchburg
ADVERTISEMENT

Tennessee is a state in the Southeastern region of the United States. Tennessee is the 36th largest by area and the 16th most populous of the 50 states.

Huntsville is a city in the Appalachian region of northern Alabama and is the county seat of Madison County. The city also extends west into neighboring Limestone County and south into Morgan County.It was founded in 1805 and became an incorporated town in 1811. The city grew across nearby hills north of the Tennessee River, adding textile mills, then munitions factories, NASA's Marshall Space Flight Center and the United States Army Aviation and Missile Command nearby at the Redstone Arsenal. The National Trust for Historic Preservation named Huntsville to its "America's Dozen Distinctive Destinations for 2010" list.The city's population is 215,006 as of the 2020 census, making it Alabama's most populous city. Huntsville is the largest city in the five-county Huntsville-Decatur-Albertville, AL Combined Statistical Area. The Huntsville metropolitan area's population was 492,000 as of 2020, making it the second most populous metropolitan area in the state after the Birmingham metropolitan area. The Huntsville metro's population reached 462,693 by 2018.

Athens is a city in and the county seat of Limestone County, in the U.S. state of Alabama; it is included in the Huntsville-Decatur-Albertville, AL Combined Statistical Area. As of the 2010 census, the population of the city is 21,897.