Wikipedia
McAllen is the largest city in Hidalgo County, Texas, United States, and the 21st-most populous city in Texas. It is located at the southern tip of the state in the Rio Grande Valley, close to the country of Mexico. The city limits extend south to the Rio Grande, across from the Mexican city of Reynosa. McAllen is about 70 mi (110 km) west of the Gulf of Mexico. As of 2019, McAllen's population was estimated to be 143,268. It is the fifth-most populous metropolitan area (McAllen–Edinburg–Mission) in the state of Texas, and the binational Reynosa–McAllen metropolitan area counts a population of nearly 1.52 million.From its settlement in 1904, the area around McAllen was largely rural and agricultural in character, but the latter half of the 20th century had steady growth, which has continued in the 21st century in the metropolitan area. The introduction of the maquiladora economy and the North American Free Trade Association led to an increase in cross-border trading with Mexico. 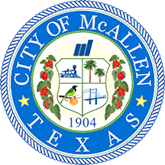 Find more things to do, itinerary ideas, updated news and events, and plan your perfect trip to McAllen
ADVERTISEMENT

Harlingen ( HAR-lin-jin) is a city in Cameron County in the central region of the Rio Grande Valley of the southern part of the U.S. state of Texas, about 30 miles (48 km) from the coast of the Gulf of Mexico. The city covers more than 40 square miles (104 km2) and is the second-largest city in Cameron County, as well as the fourth-largest in the Rio Grande Valley. As of the 2010 census, the city had a population of 64,849, for a growth rate of 12.5% since the 2000 census.Harlingen is a principal city of the Brownsville–Harlingen metropolitan area, which is part of the larger Brownsville-Harlingen-Raymondville combined statistical area, included in the Matamoros–Brownsville metropolitan area.

Brownsville () is a city in Cameron County in the U.S. state of Texas. It is on the western Gulf Coast in South Texas, adjacent to the border with Matamoros, Mexico. The city covers 145.2 sq mi (376.066 km2), and has an estimated population of 182,781 as of 2019. It is the 131st-largest city in the United States and 18th-largest in Texas. It is part of the Matamoros–Brownsville metropolitan area. The city is known for its year-round subtropical climate, deep-water seaport, and Hispanic culture. The city was founded in 1848 by American entrepreneur Charles Stillman after he developed a successful river-boat company nearby. It was named for Fort Brown, itself named after Major Jacob Brown, who fought and died while serving as a U.S. Army soldier during the Mexican–American War (1846–48). As a county seat, the city and county governments are major employers. Other primary employers fall within the service, trade, and manufacturing industries, including a growing aerospace and space transportation sector. It operates international trading through the Port of Brownsville. The city experienced a population increase in the early 1900s, when steel production flourished. It is frequently cited as having one of the highest poverty rates in the United States. Due to significant historical events, the city has multiple houses and battle sites listed under the National Register of Historic Places. It was the scene of several key events of the American Civil War, such as the Battle of Brownsville and the Battle of Palmito Ranch. The city was also involved in the Texas Revolution, as well as the Mexican–American War. Brownsville's idiosyncratic geographic location has made it a wildlife refuge center. Several state parks and historical sites are protected by the Texas Parks and Wildlife Department.

South Padre Island is a tropical oasis located off the southern tip of Texas. This barrier island offers the unsurpassed beauty of the Laguna Madre Bay and the Gulf of Mexico and is the ideal year-round destination for visitors seeking a getaway from the daily grind.