Wikipedia
Smyth County is a county located in the U.S. state of Virginia. As of the 2020 census, the population was 29,800. Its county seat is Marion. 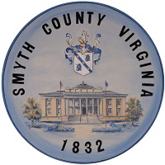 Find more things to do, itinerary ideas, updated news and events, and plan your perfect trip to Smyth County
ADVERTISEMENT

Tazewell County () is a county located in the southwestern portion of the U.S. state of Virginia. As of the 2010 census, the population was 45,078. Its county seat is Tazewell.Tazewell County is part of the Bluefield, WV-VA Micropolitan Statistical Area. Its economy was dependent on coal and iron of the Pocahontas Fields from the late 19th into the 20th century.

Grayson County is a county located in the southwestern part of the Commonwealth of Virginia. As of the 2010 census, the population was 15,533. Its county seat is Independence. Mount Rogers, the state's highest peak at 5,729 feet (1,746 m), is in Grayson County.

Abingdon is a town in Washington County, Virginia, United States, 133 miles (214 km) southwest of Roanoke. The population was 8,191 at the 2010 census. It is the county seat of Washington County. The town encompasses several historically significant sites and features a fine arts and crafts scene centered on the galleries and museums along Main Street. Abingdon is part of the Kingsport−Bristol (TN)−Bristol (VA) Metropolitan Statistical Area, which is a component of the Johnson City−Kingsport−Bristol, TN-VA Combined Statistical Area − commonly known as the Tri-Cities region.