Wikipedia
The Long Beach Peninsula is an arm of land on the southern coast of the state of Washington in the United States. Entirely within Pacific County, it is bounded on the west by the Pacific Ocean, the south by the Columbia River, and the east by Willapa Bay. Leadbetter Point State Park and Willapa National Wildlife Refuge are at the northern end of the peninsula and Cape Disappointment is at the southern end, with Pacific Pines State Park located in between. Cape Disappointment State Park west of Ilwaco, part of the Lewis and Clark National Historical Park, was the westernmost terminus for the Lewis and Clark Expedition. A monument designed by Maya Lin as part of the Confluence Project was dedicated there in 2005. The Long Beach Peninsula is known for its continuous sand beach 28 miles (45 km) in extent on the Pacific Ocean side, claimed to be the longest beach in the United States. It is a popular vacation destination for people from Seattle, Washington (165 miles (266 km) distant) and Portland, Oregon (115 miles (185 km) distant). 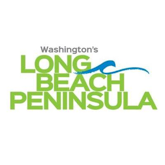 Astoria is a port city and the seat of Clatsop County, Oregon, United States. Founded in 1811, Astoria is the oldest city in the state of Oregon and was the first American settlement west of the Rocky Mountains. The county is the northwest corner of Oregon, and Astoria is located on the south shore of the Columbia River, where the river flows into the Pacific Ocean. The city is named for John Jacob Astor, an investor and entrepreneur from New York City, whose American Fur Company founded Fort Astoria at the site and established a monopoly in the fur trade in the early nineteenth century. Astoria was incorporated by the Oregon Legislative Assembly on October 20, 1876.The city is served by the deepwater Port of Astoria. Transportation includes the Astoria Regional Airport. U.S. Route 30 and U.S. Route 101 are the main highways, and the 4.1-mile (6.6 km) Astoria–Megler Bridge connects to neighboring Washington across the river. The population was 9,477 at the 2010 census.

Cannon Beach is a city in Clatsop County, Oregon, United States. The population was 1,690 at the 2010 census. Cannon Beach is a popular coastal tourist destination in Oregon, famous for Haystack Rock, a 235 ft (72 m) sea stack that juts out along the Pacific Coast. In 2013, National Geographic listed Cannon Beach as "one of the world’s 100 most beautiful places."

The city of Tillamook is the county seat of Tillamook County, Oregon, United States. The city is located on the southeast end of Tillamook Bay on the Pacific Ocean. The population was 5,231 at the 2020 census.