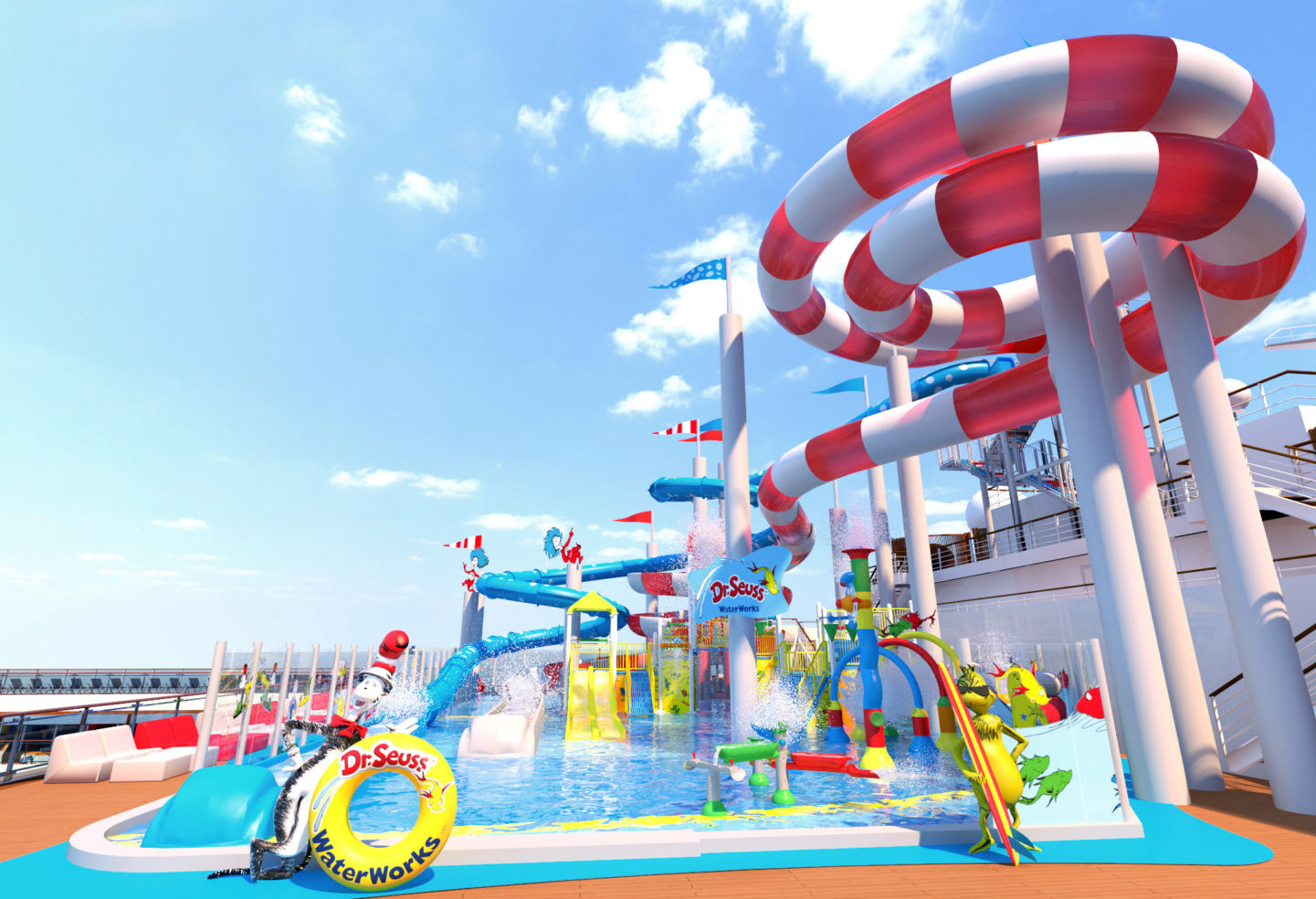 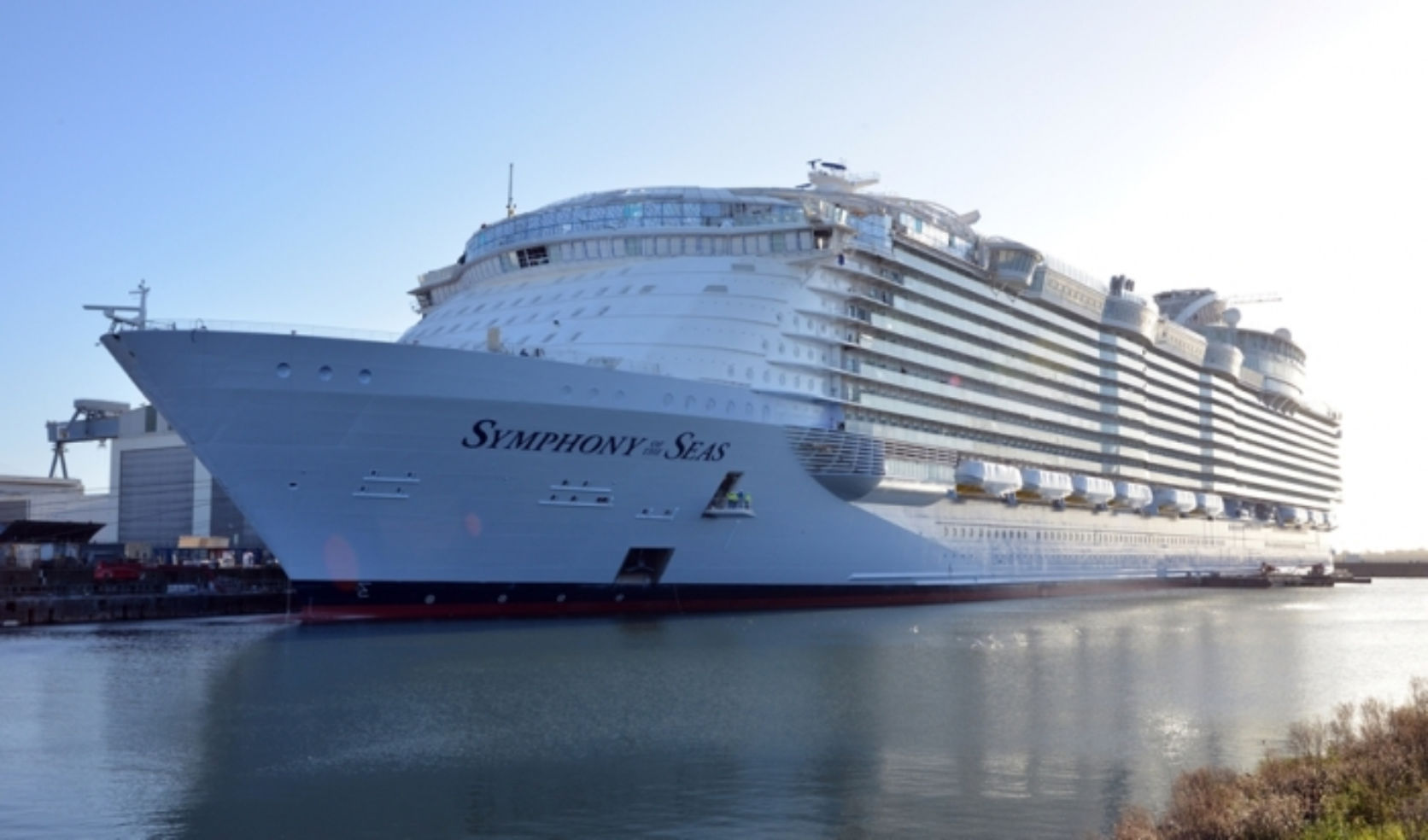 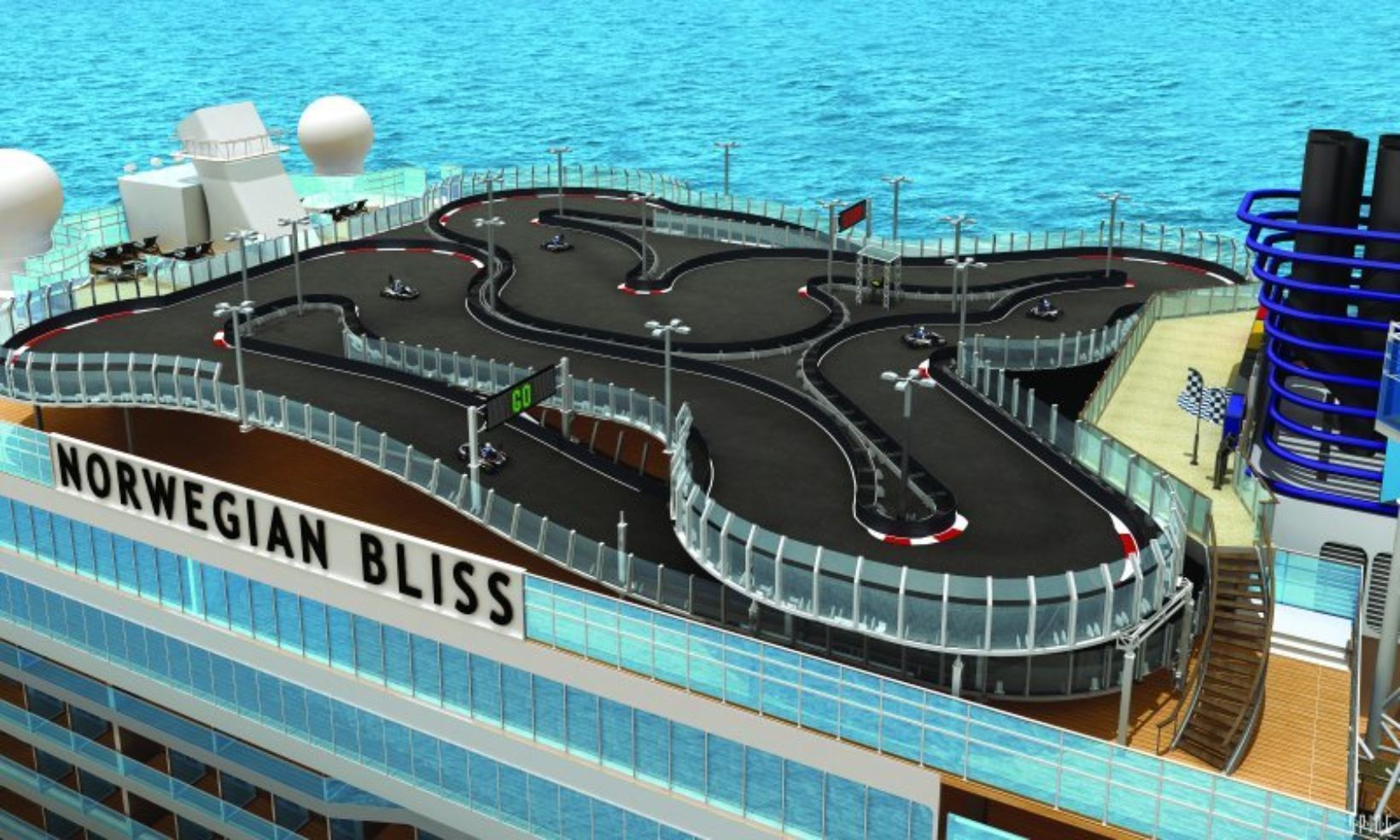 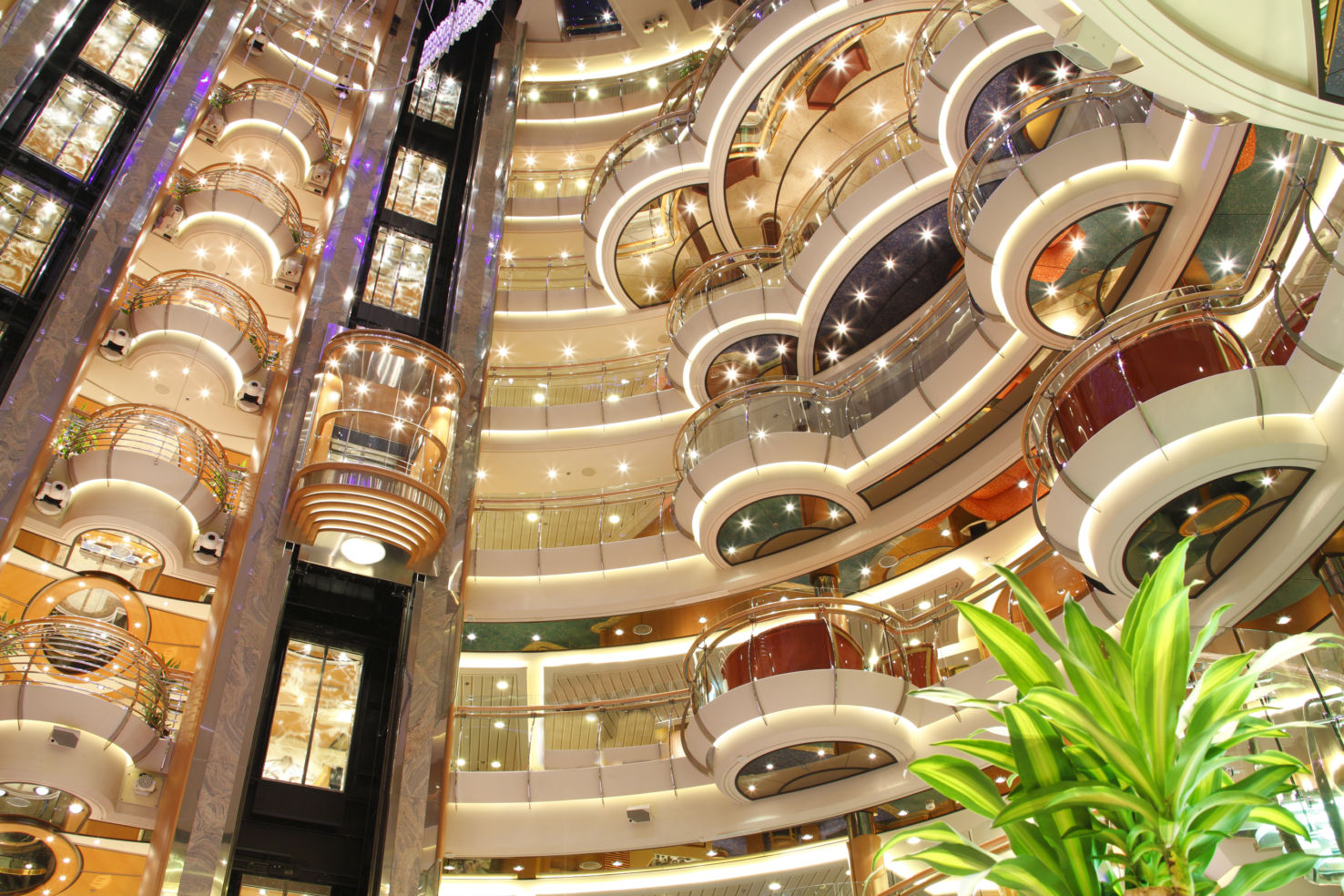 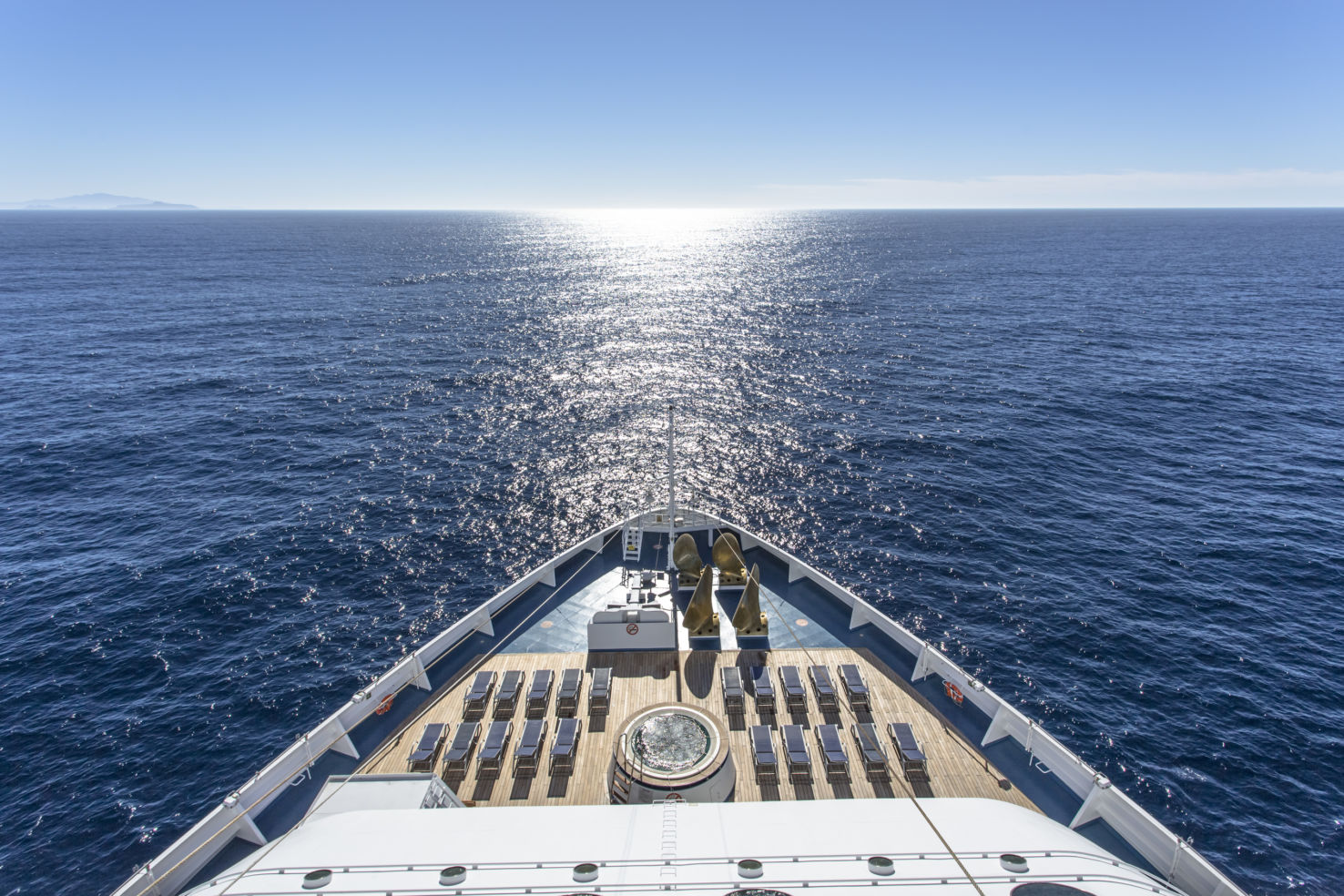 Debuting in April, Carnival Horizon will feature a real kid-pleaser: the colorful and whimsical Seuss Waterworks Park, with tipping buckets, a splash playground, and polka-dotted slides themed around the Cat and the Hat, Thing 1 and Thing 2, and other Seuss characters.

Symphony of the Seas

At 230,000 tons and a capacity more than of 5,500 passengers, Royal Caribbean’s Symphony of the Seas is soon to be the largest cruise ship at sea, boasting robot bartenders, a waterfront theater with diving platforms, brand-new dining venues, a high-tech skating show, and a facial-recognition check-in system.

Courtesy Symphony of the Seas

Launching in June, the Norwegian Bliss will feature action-packed attractions such as a bi-level electric race car track and an open-air laser tag course that resembles an abandoned space station, plus showings of Jersey Boys, solo-traveler staterooms with virtual ocean views, and two observation lounges.

Across the board, cruise lines have been upgrading their existing fleets' technology, from wearable tech that allows guests to order food and navigate around Princess's Ocean Medallion to smart bracelets that offer geo-located activity suggestions and virtual-reality previews of shore excursions on MSC. We’re particularly excited for the self-driving shuttles and VR dining service in development at Royal Caribbean.

Along with the new year comes wave season—the three-month period when cruise lines offer their most aggressive deals. Celebrity Cruise Lines’ “Sail Beyond Event” is offering up to $150 savings for bookings on any stateroom category, plus a choice of perks, such as a beverage package or a $150 onboard credit. More lines will be rolling out their promotions in the coming weeks, so stay tuned for more savings.

Racetracks! Zip lines! Show tunes! Set sail in 2018 with the newest ships and hottest amenities on the water.

2018 promises to be an exciting year on the seas. With some major ship launches—and their innovative amenities (laser tag courses, a Seuss-themed water park— it’s no wonder that some travelers are bypassing land-based vacations for leisure time on the ocean. If you're looking for fun, affordable options for the first half of 2018, read on for our picks.

Launched in December 2017, MSC Seaside borrows from her home port of Miami: balconies that look like beach condos, an oceanfront boardwalk, and plenty of outdoor spaces where you can take advantage of time in the sun (open-air spa cabanas, translucent catwalk-style walkways). Kids and adults alike can enjoy the high-in-the-sky zip lines and an elaborate water park with an interactive slide that’s part video-game, part amusement ride. There’s no shortage of food options onboard either—notably, an a la carte sushi and teppanyaki restaurant from Hawaii-based chef Roy Yamaguchi and a new partnership with Joe Bastianich, whose specially created signature dish is served on formal nights. (Also keep an eye out for MSC Seaside’s sister ship, the Mediterranean- bound MSC Seaview, to debut this spring.)

When Carnival Horizon debuts in April, it will showcase some firsts for the brand. Guy’s Pig & Anchor Bar-B-Que Smokehouse is an extension of Guy Fieri’s popular casual eateries that are already across the fleet. The 138-seat red-brick venue will bring aboard back ribs, slow-cooked brisket, and other down-home favorites—all smoked in-house with Guy’s signature rubs and spices and paired with craft brews from the on-site brewery. At Bonsai Teppankayi, the menu is as much of a show as it is a meal, where chefs will chop, dice, and flip Far East-inspired morsels at custom stations. Meanwhile, the colorful and whimsical Seuss Waterworks Park will be sure to impress with tipping buckets, a splash playground, and polka-dotted slides themed around the Cat and the Hat, Thing 1 and Thing 2, and other Seuss characters.

Carnival Horizon’s inaugural season includes itineraries in the Bahamas and the Caribbean. Six-day cruises from $449 per person; carnival.com.

3. SYMPHONY OF THE SEAS

The megaship of megaships, Royal Caribbean’s Symphony of the Seas—at 230,000 tons and a capacity more than of 5,500 passengers—will reign as the largest cruise ship at sea. (The current titleholder is her sister vessel, the Harmony of the Seas.) Onboard, Symphony will carry some of the brand’s signature wow factors: robot bartenders, a waterfront theater with diving platforms, a 10-story slide, and a reimagined version of the “neighborhood” concept. But she’ll also come with a number of brand-new venues (a raw bar with oysters shucked to order and a taco and burrito joint) in addition to new entertainment options (a high-tech skating show), and an innovative check-in system that involves facial recognition technology.

The Symphony of the Seas will debut in the Mediterranean before heading to the Caribbean for the winter. From $349 for three nights; royalcaribbean.com.

Passengers aboard the Norwegian Bliss, launching in June 2018, won’t ever find a moment where they’ll be twiddling their thumbs or wondering what to do. The 4,000-passenger vessel features action-packed attractions such as a bi-level electric race car track and an open-air laser tag course that resembles an abandoned space station. You can also dine at a new South of the Border–inspired restaurant that serves enchiladas de mole and margaritas made from Norwegian’s own tequila brand. Afterwards, you can pick up dessert at Coco’s, which offers handmade pralines, crepes, and an oversize chocolate fountain. The ship also features showings of Jersey Boys, solo-traveler staterooms with virtual ocean views, and two observation lounges.

Speaking of technology, more cruise lines have been upgrading their fleets. Princess’s Ocean Medallion, to be rolled out over the course of the year, is wearable technology that acts as a personal concierge (you can order food and navigate your way around the ship, for example). Passengers on MSC can experience a similar service: With smart bracelets, guests will be able to trigger geo-located suggestions, track their kids' whereabouts on touch screens, and elsewhere onboard, preview shore excursions by virtual reality. The latest in tech is just a sneak peak of what’s to come in the industry. We’re looking forward to the self-driving shuttles and VR dining service that Royal Caribbean is in the process of developing.

The new year is upon us, which means that wave season—the three-month period when cruise lines offer their most aggressive deals—has arrived. Celebrity Cruise Lines’ “Sail Beyond Event” is offering up to $150 savings for bookings on any stateroom category, plus a choice of perks, such as a beverage package or a $150 onboard credit. Other cruise lines haven’t announced their promotions yet, but stay tuned for more savings.