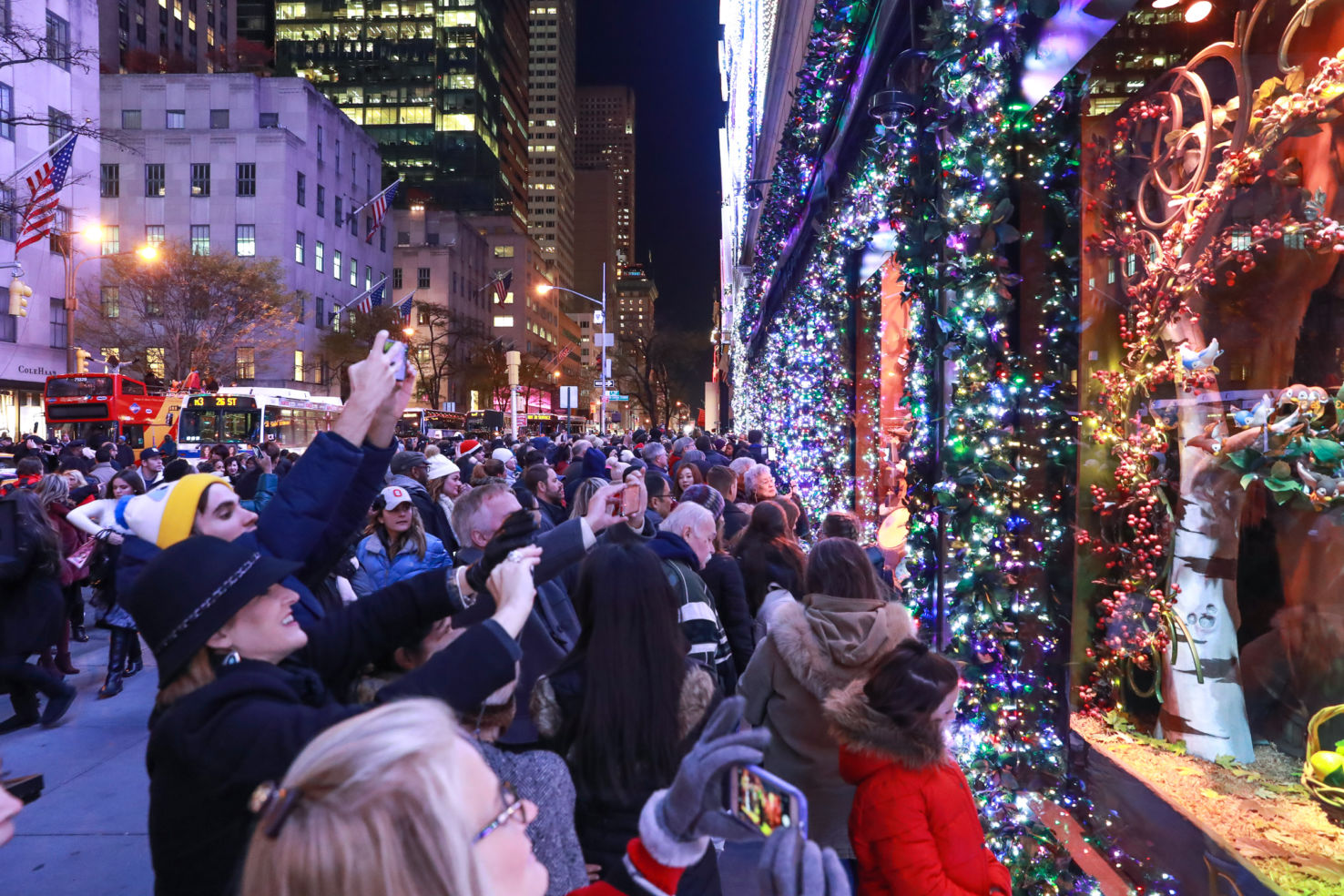 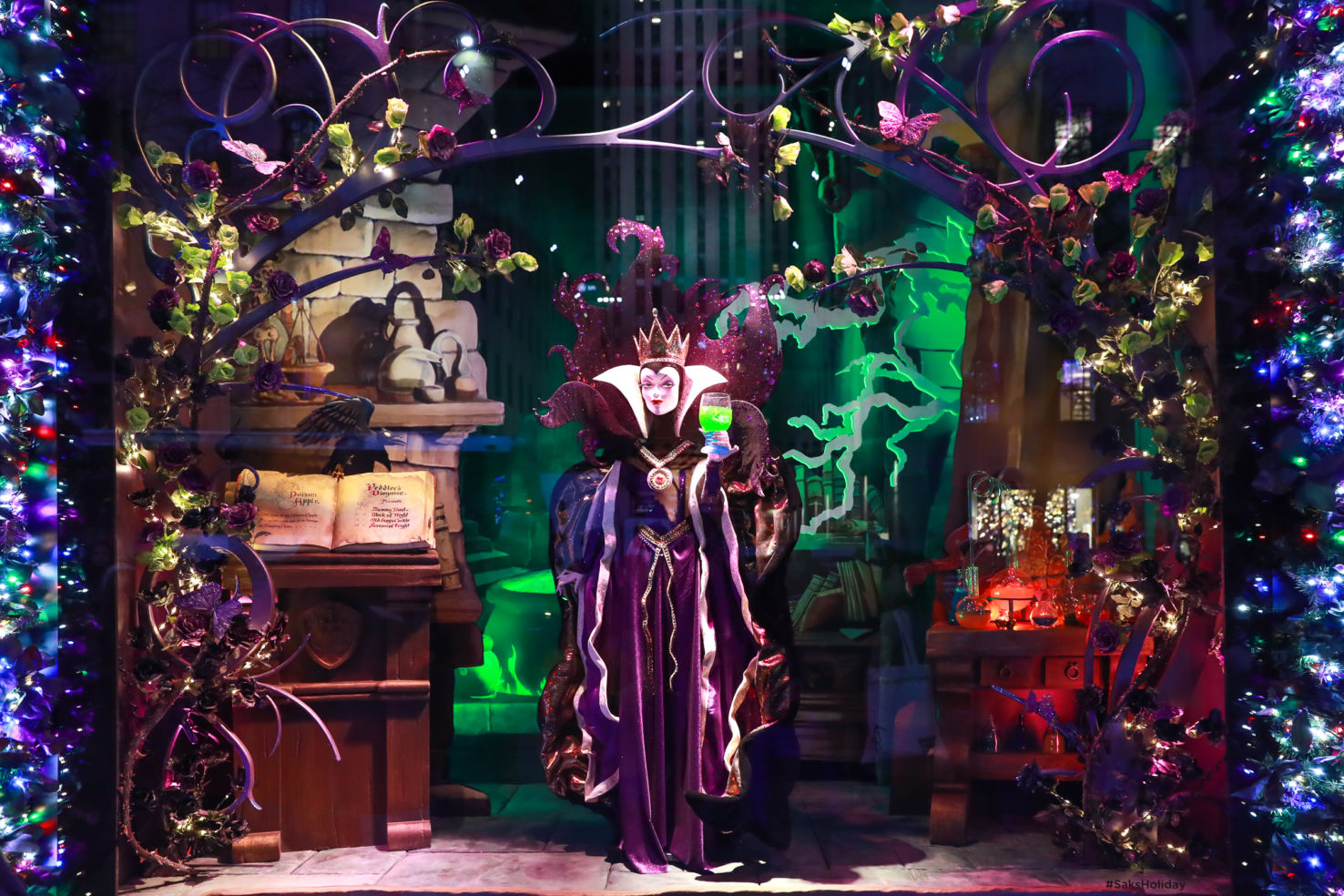 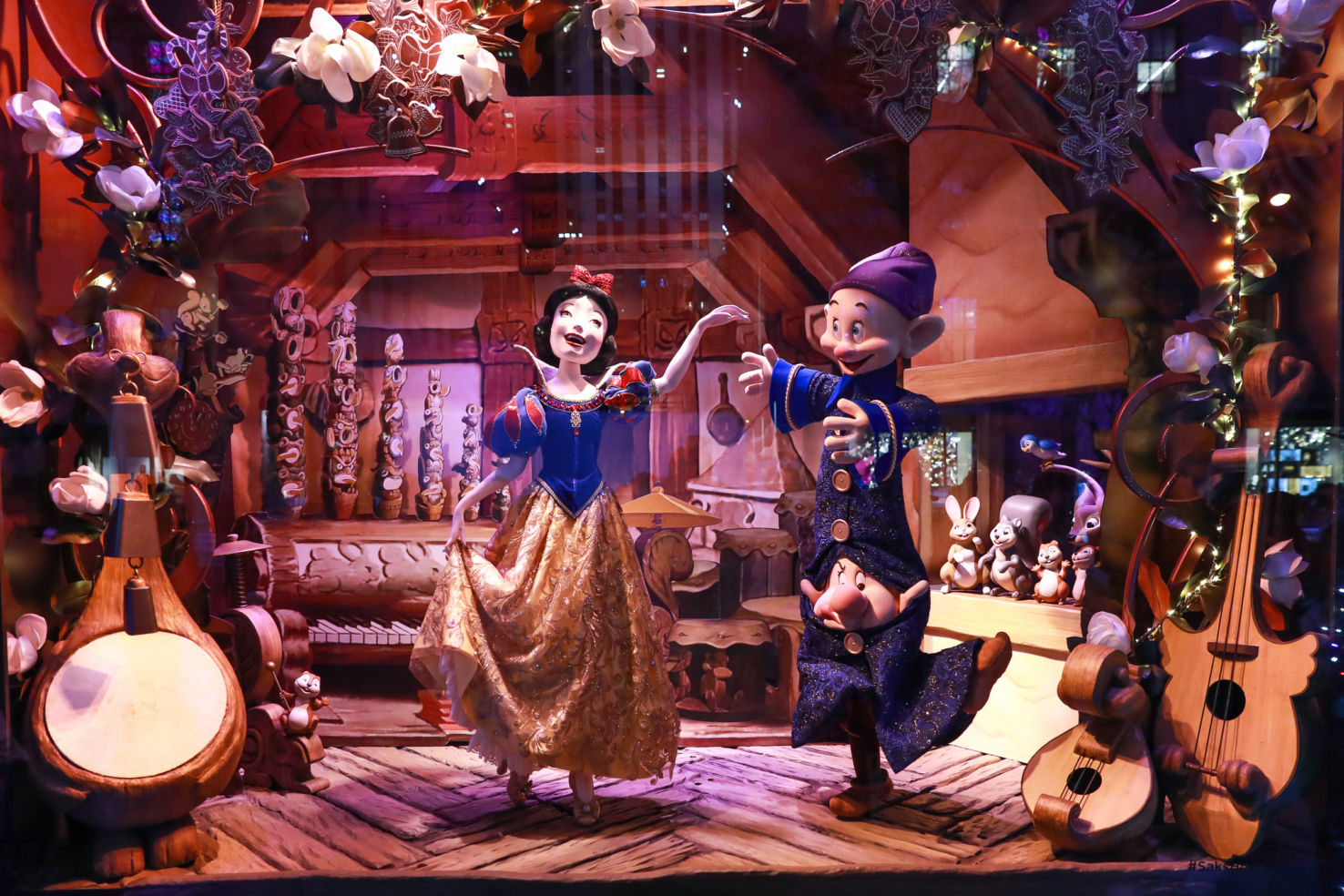 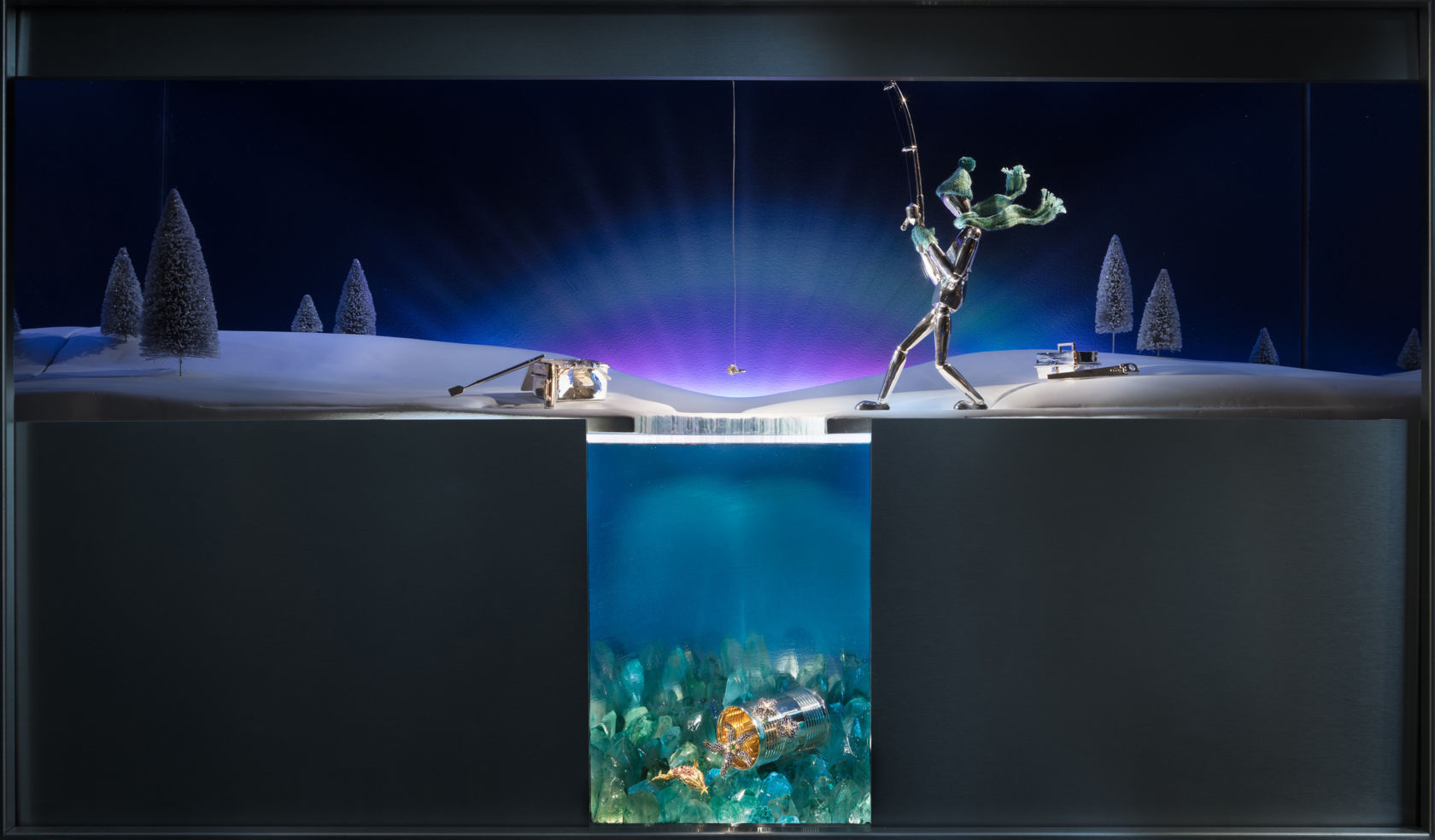 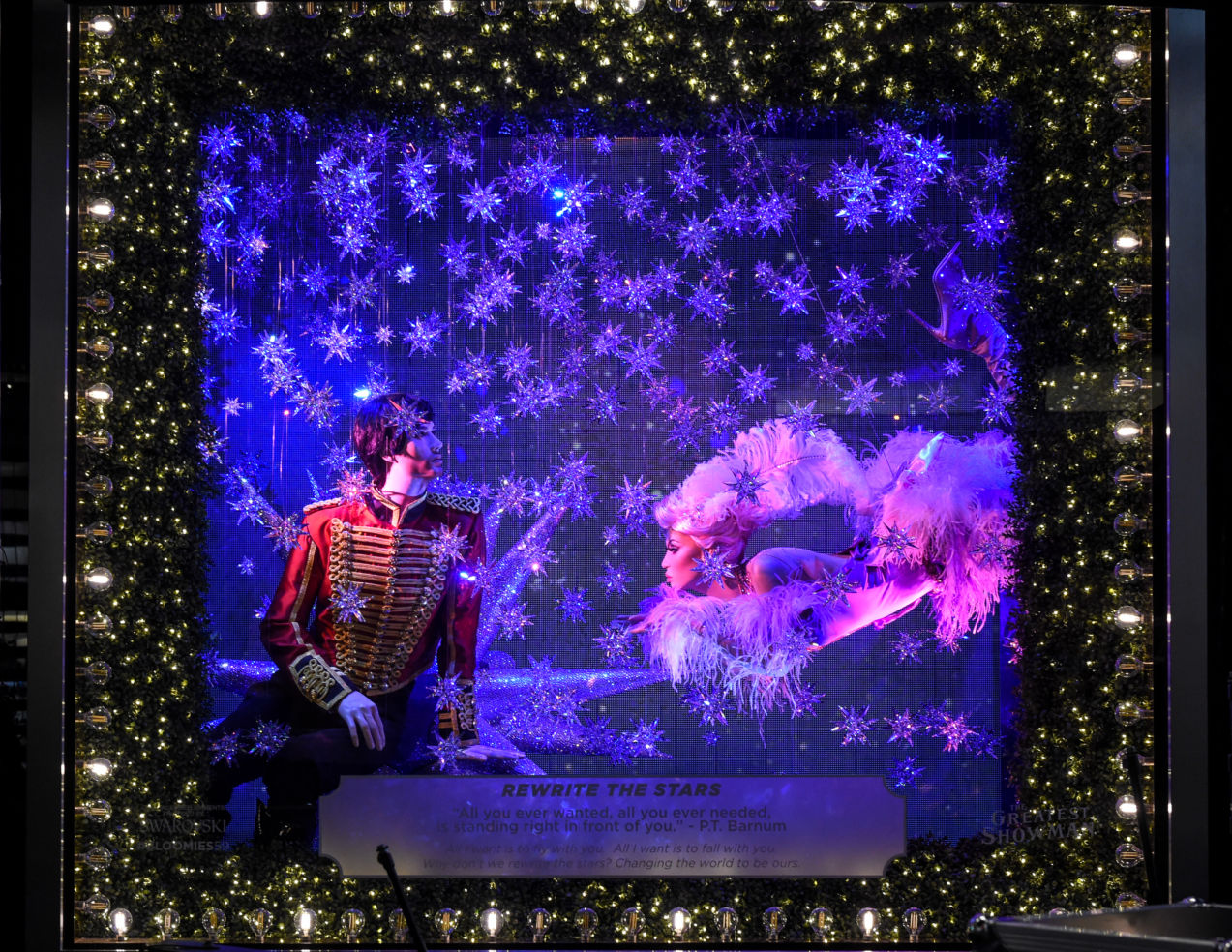 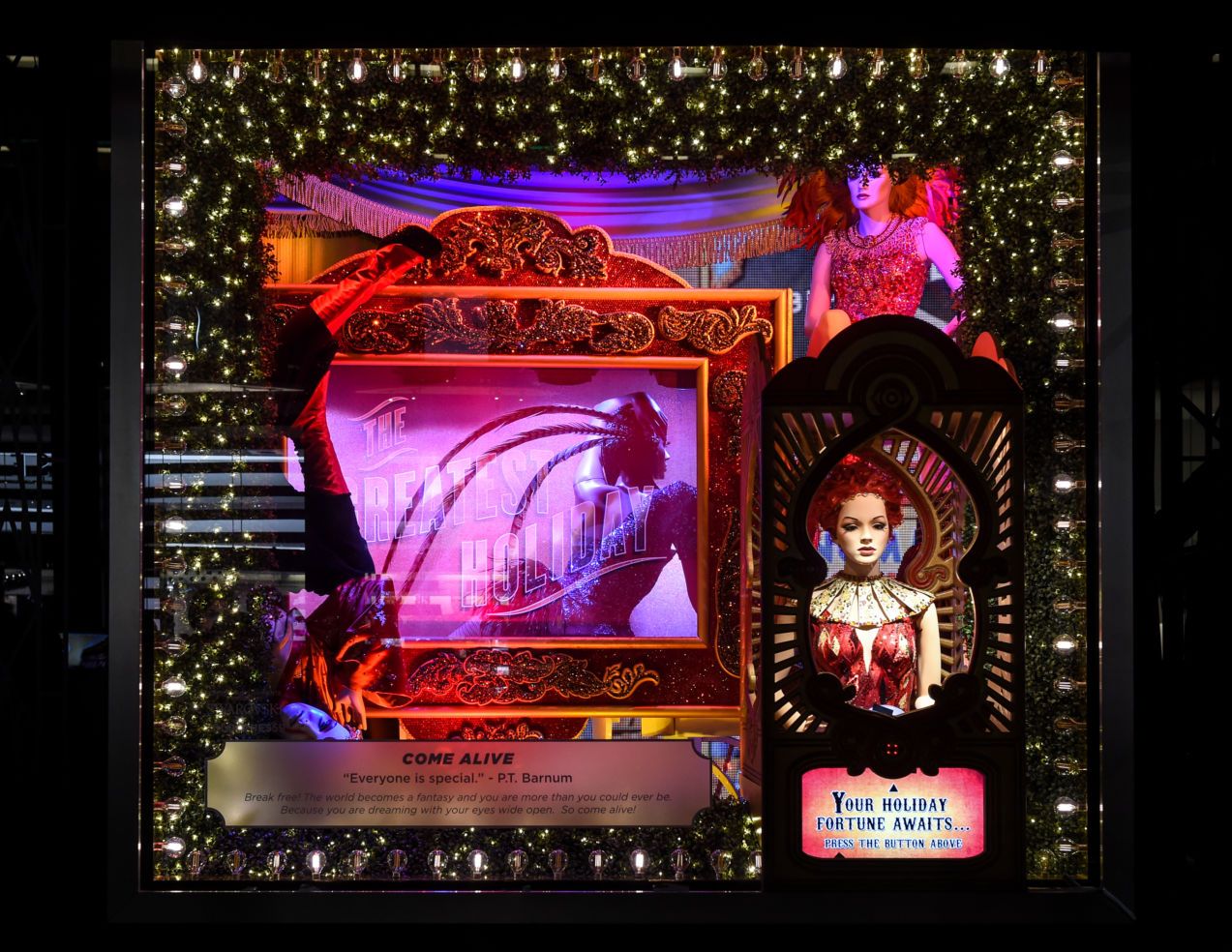 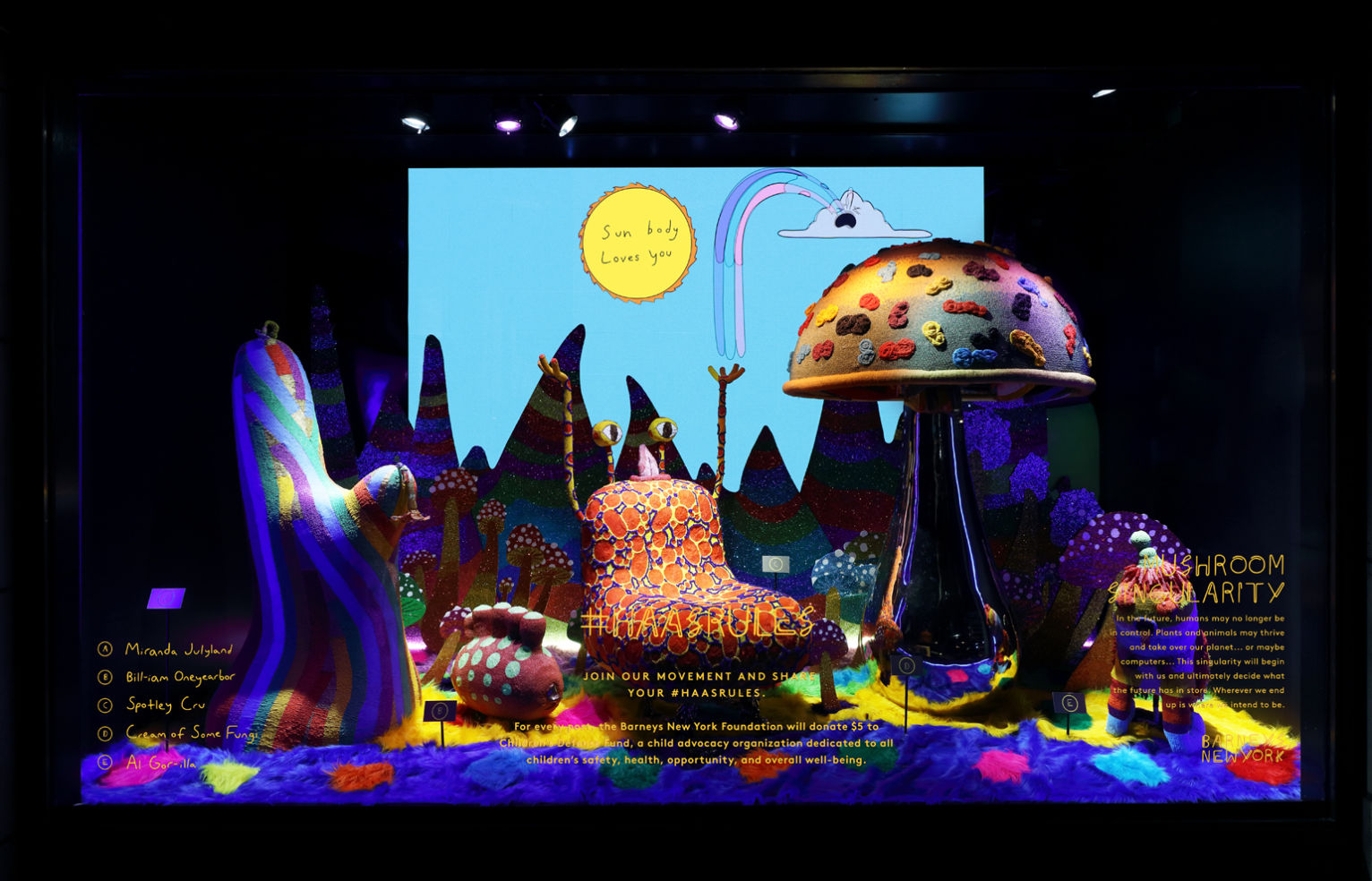 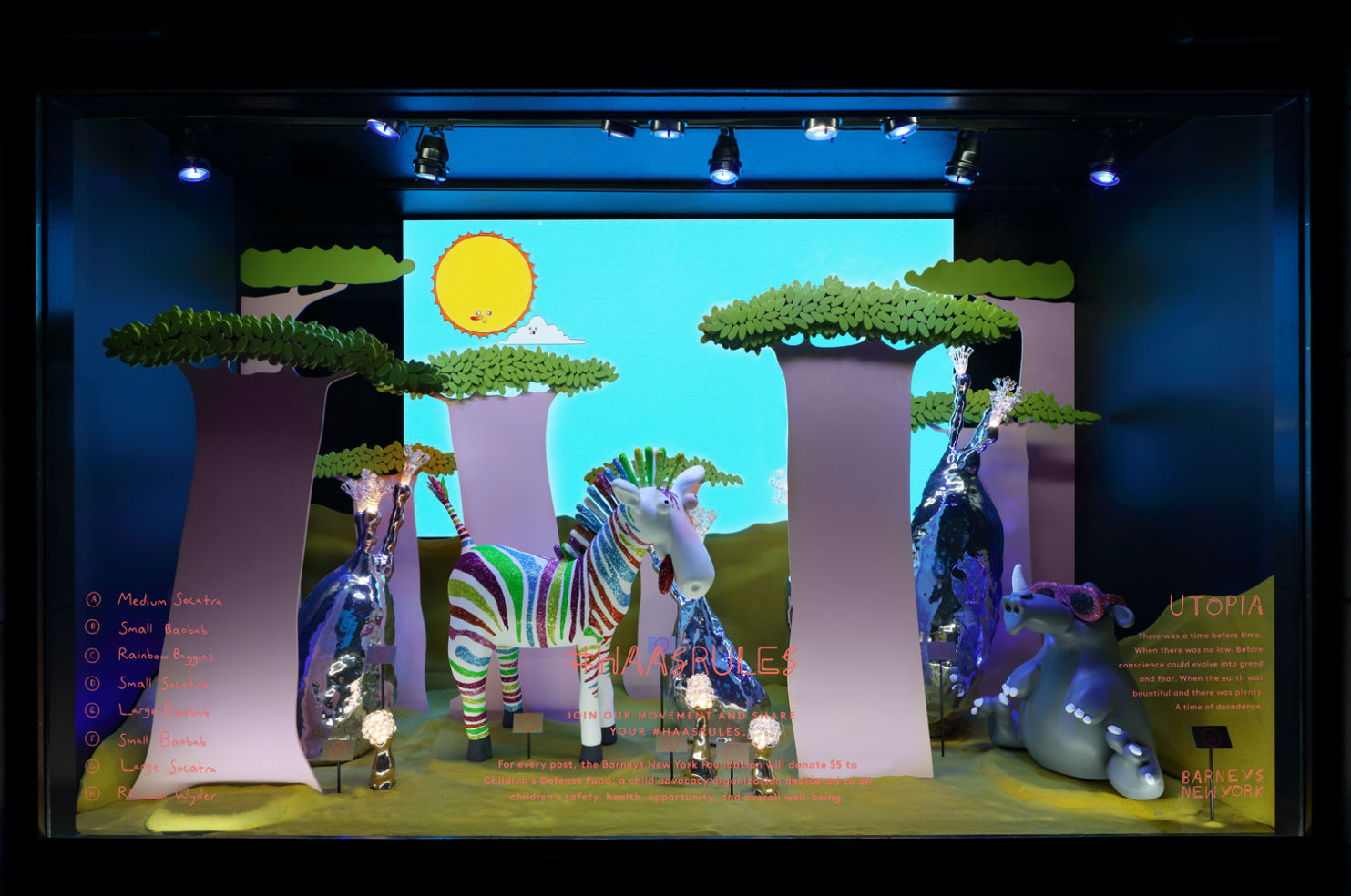 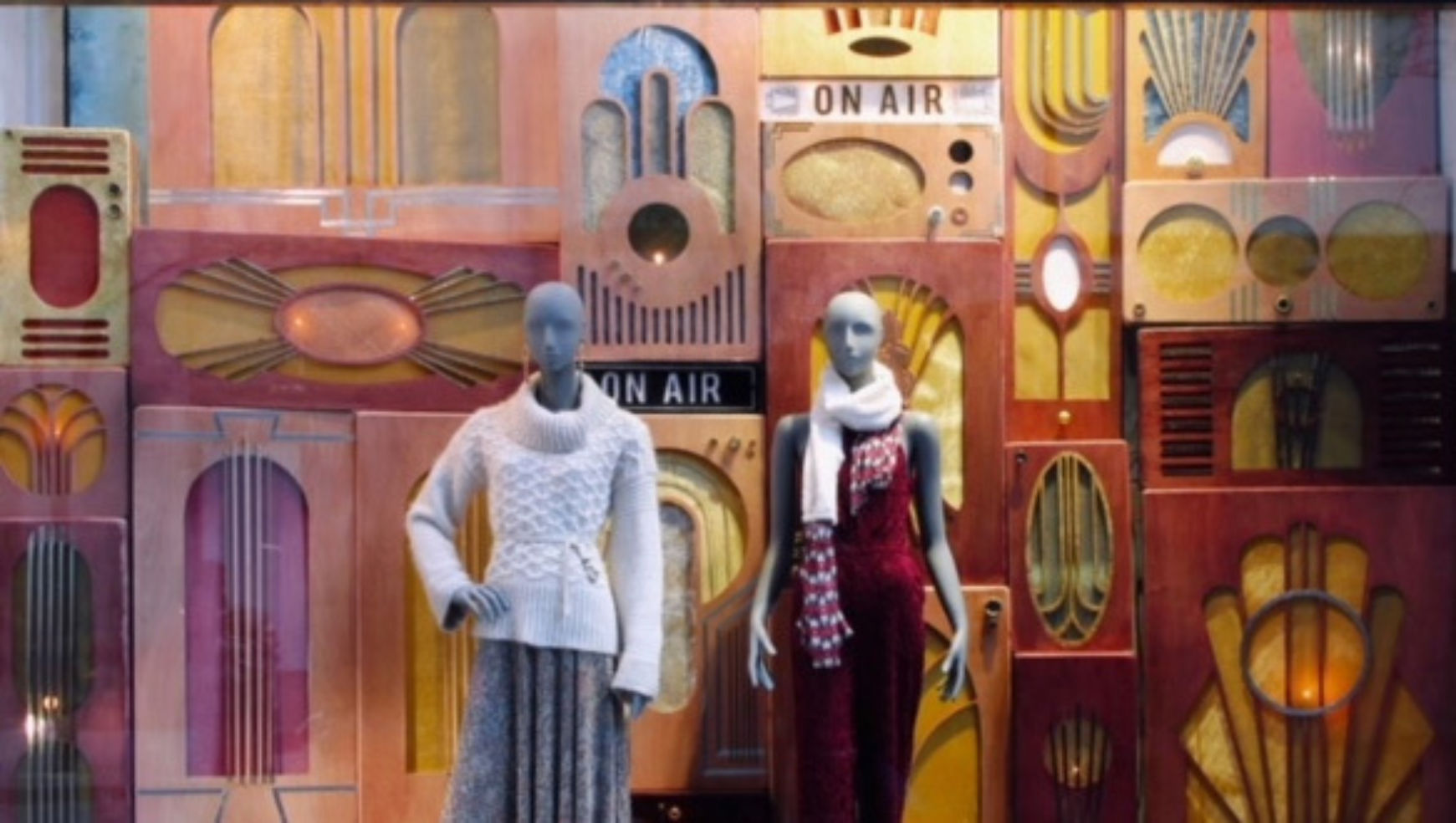 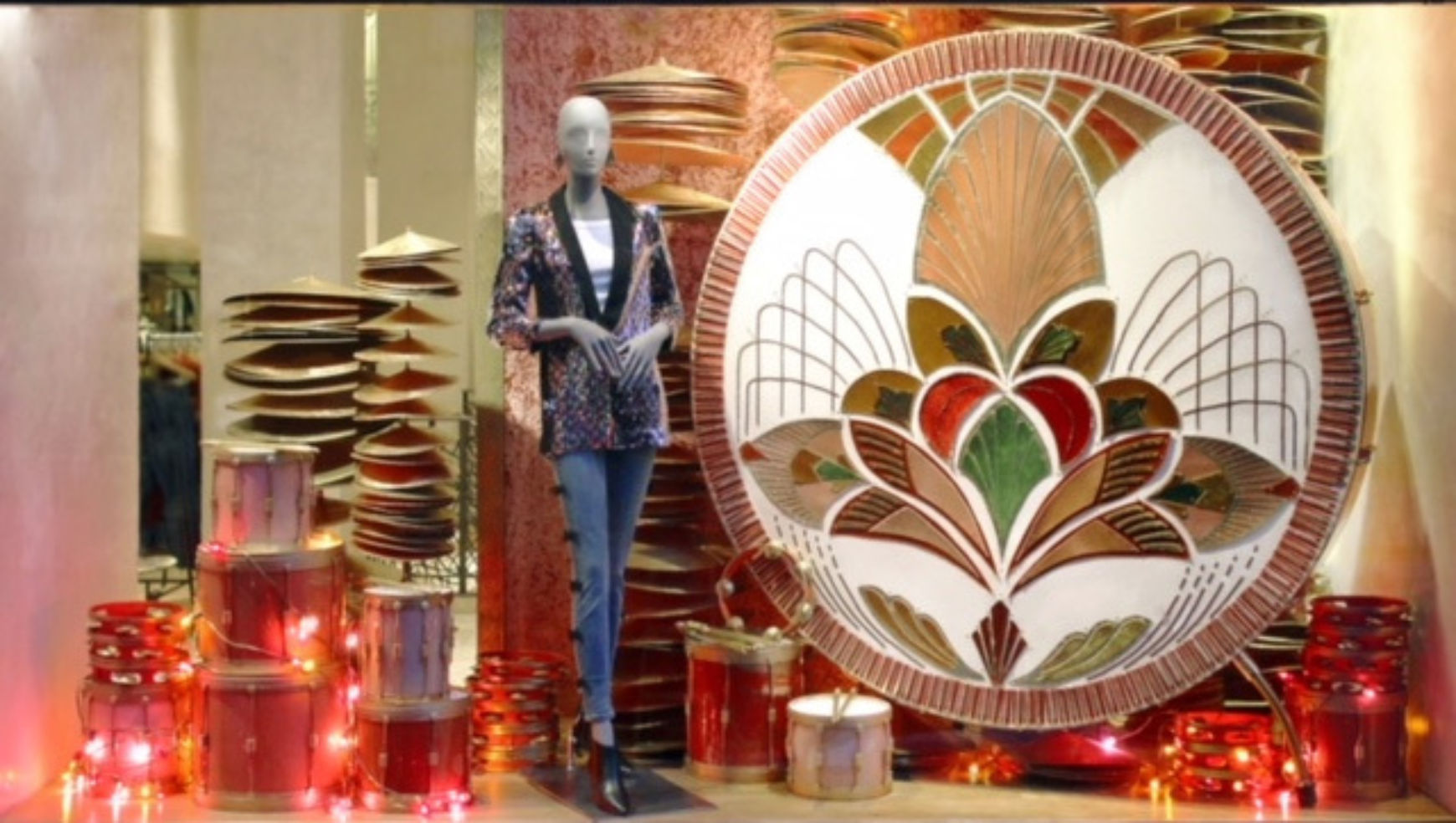 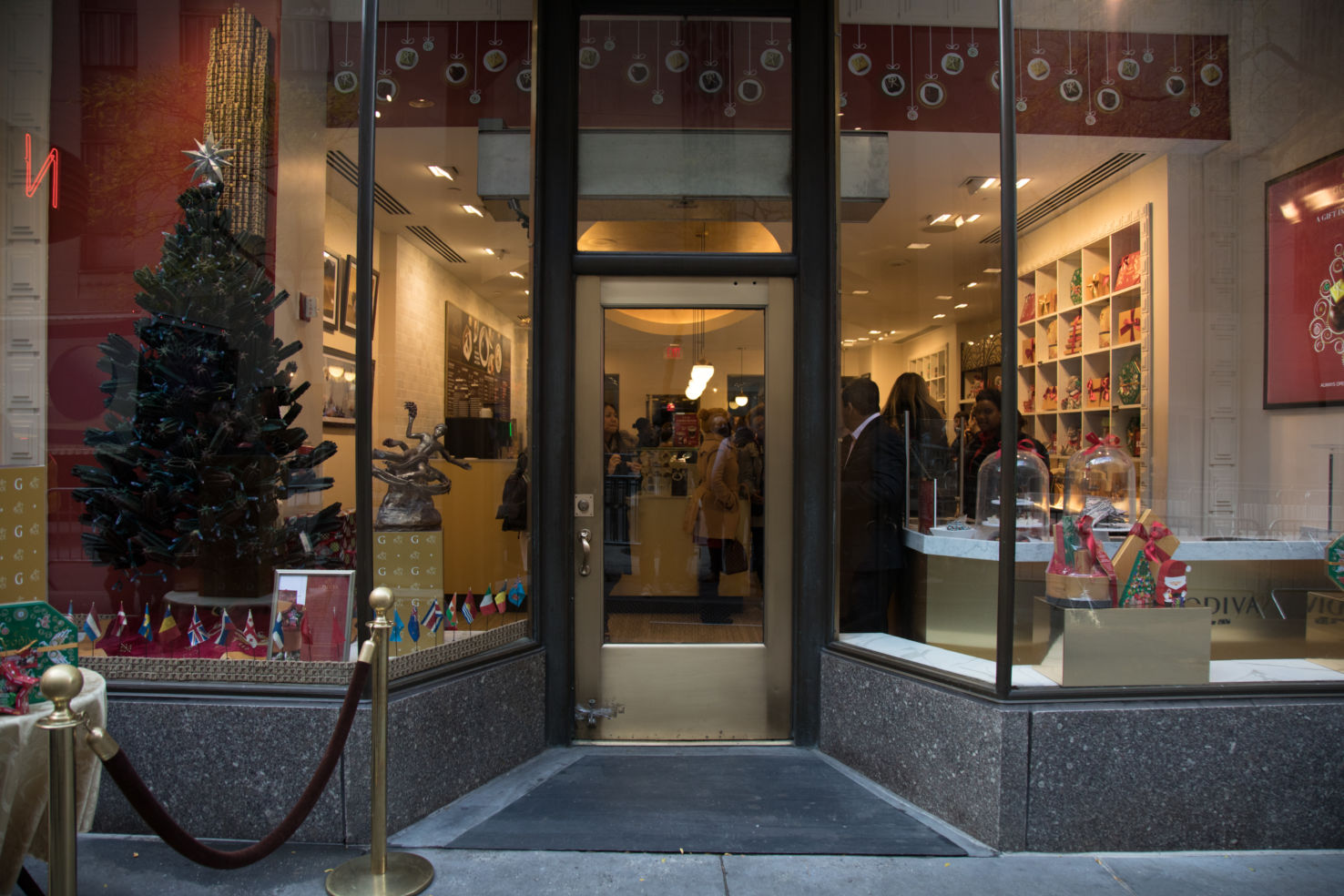 The holiday windows at New York's iconic high-end stores are as much of a tradition as the Rockettes, and it almost feels like every year each store's spectacle outdoes the last. We pounded the pavement to find out what goes into making it happen.

Through January 2nd, if you stand on Fifth Avenue between 49th and 50th streets, you can join the many passers-by who pause outside Saks Fifth Avenue, mesmerized by the colossal, glorious light show on store’s towering exterior. The numbers speak volumes: the display is comprised of 354,819 individual points of light that are controlled to create the extravaganza. It took over 12,000 hours and more than 250 people—domestically and internationally—to create it over the course of a year. It also involves 13,943 feet of garlands, 5,042 square feet of foliage (including two 63-foot vertical panels), and nine 21.5-foot spires covered in crystals. Plan to linger. Just across the avenue from Rockefeller Center and its world-famous tree, you're at the epicenter of New York City's holiday festivities.

The Saks Fifth Avenue spectacle does not end at the light show. In honor of the 80th anniversary of “Snow White and the Seven Dwarfs,” the store collaborated with Disney to create 14 scenes from the movie. You’ll see the familiar characters – the seven dwarfs going off to work in the mines, the diabolical queen with her lethal red apple, Snow White frolicking amid the woodland creatures. But this being an iconic luxury store, the spectacle also features an element of lavish haute: four legendary designers—Alberta Ferretti, Naeem Khan, Monique Lhuillier, and Marchesa—have created one-of-a-kind fairytale-inspired gowns, which are features on dramatic mannequins in a fantasy forest setting.

Few American institutions are iconic enough to have their own trademarked color, but Tiffany Blue is as familiar as emerald green or fluorescent pink. At the Tiffany & Co. flagship store’s dazzling windows along Fifth Avenue, stacks of tiny Tiffany Blue boxes add pops of color to the playful miniature landscapes with figurines doing all kinds of wintery things: ice skating, schlepping piles of presents. Each scene sparkle and shimmer like the store’s diamond-filled display cases.

About a dozen mini versions of the classic Tiffany & Co. starburst chandelier were commissioned from legendary Australian glassmaker Lobmeyr, where craftsmen designed each one with 300 crystals. Each window scene is set up against a glittering silk backcloth. Rubelli, a family-owned textile producer in Venice, custom produced them, adorning them with no fewer than two million hand-cut stars designed at Tiffany and woven in Venice. Little wonder the spectacle takes about a year from conception to display.

If the grandeur and detail and dreamlike merriment of the circus-themed windows at Bloomingdale’s flagship 59th Street flagship store don’t wow you on first glance, consider this: 7.6 million Swarovski crystals were used to create them. The wondrous, dynamic display is the outcome of a partnership with “The Greatest Showman,” a movie about the life of the circus kingpin P.T. Barnum. It opens in theaters on December 20th..

Each Bloomingdale's window is inspired by a different song from the movie, and as you step right up (sorry!) to each of them, you can hear the respective tune. Collectively you’ll spot a classic cast of circus characters—tallest men, smallest men, acrobats, a snake charmer, a bearded lady, a tattooed lady, and so on. As unique as each of them are, the Lexington Avenue vignettes all have one thing in common: they glimmer with props, clothing, and accessories covered in massive amounts of Swarovski crystals.

The exuberant scenes in Barneys New York’s windows on Madison Avenue are psychedelic Technicolor menageries that fuse childlike whimsy, dynamic streetwear culture, and refined couture. Designed to illustrate four different eras of life on earth, from primordial to futuristic, the display is a collaboration with Haas Brothers, young designers out of LA known for zany sculptures and colorful furniture. But here’s the best part: there’s a humanitarian element to it all. Snap a photo of yourself with one of the displays (inside the store or out) and use the tag #HaasRules on social media. With each post with the #HaasRules hashtag, The Barneys New York Foundation will donate $5 for every hashtag to the Children's Defense Fund.

Those who expect a Christmas tree at every turn could get a little disoriented by the absence of any wreaths or bells or elves in the Barneys New York display. For Matthew Mazzucca, creative director at Barneys, the holidays are about much more than the familiar trimmings. “Haas for the Holidays is about positivity, and tackling complicated themes through the playful and unique lens of Haas environments and characters. We focused on creating accessible and universal themes that are true for the holidays no matter where you celebrate – like love, friendship, family and inclusiveness – rather than using traditional holiday or winter motifs,” he said. “During these complicated times, people want something that is simple and joyful. We are creating ideas and experiences that are accessible, shareable and important to everyone at this time of the year.”

The flagship store of Anthropologie, the hip and whimsical women’s fashion and home décor store, is located next to Radio City Music Hall, and the three windows right behind the iconic theater pay homage to its Art Deco style, with fancifully dressed mannequins appearing in an old-timey, Big Band-era broadcasting station against a wall of vintage speakers and radios. It’s a thing of vintage beauty and exceptional craftsmanship. After all, those speakers are radios are made, in part, of painstakingly cut cardboard. It’s part of the musical theme that the store was tasked with turning into something visual and eye-catching, explained Senior Store Brand Leader Leah Pivnick.

The musical theme at Anthropologie is elaborated in other windows that stretch along two sides of the building, which once housed The Associated Press. In each of the staged scenes, Pivnick took a musical section of an orchestra-–woodwinds, brass, percussion, and strings, plus a xylophone--and spun out a whimsical, almost abstract spectacle. Using only materials as simple as drinking straws, cardboard, beads, PVC pipe, velvet strips, small squares of leather, thumbtacks, tape, and lots of gold paint, she and an industrious team built curtains that appear to billow, oversize trumpets, a soaring configuration of vertical piccolos, flutes, clarinets and bassoons that rise up from the floor like hundreds of tightly packed candles on a layered birthday cake.

A few short blocks from the mighty tree in Rockefeller Center that towers majestically beside the ice rink is the Godiva chocolate store, which is actually the first café store in the USA. In the window is a seven-and-a-half-foot tall tree that stands in front of a 9-foot building façade. Nearby is a small version of the famous brass Prometheus statue, as well as a cheery ice skater. But here’s the kicker: it’s all made of chocolate, every last bit of it meticulously constructed and sculpted by an artist known as Paul the Chocolate Genius. The tree alone, which features 1200 spruce pine leaves, involves 225 pounds of chocolate.

From nearly 14,000 feet of garland to millions of crystals to a tree made of 250 pounds of chocolate, this year's holiday windows are guaranteed to astound.

New York City puts on quite a show each December, as shoppers, commuters, and visitors alike are entranced by the jaw-dropping holiday window displays. With planning that starts up to a year in advance, each store's display is an epic enterprise defined by high-tech theatrics, detail-obsessed craftsmanship, military-caliber logistics, turbo-charged imagination, and lots and lots of crystals. (The windows at Bloomingdale’s alone involve several million of them.)

An afternoon stroll through Midtown Manhattan this season offers spectacles galore, from a light show worthy of Las Vegas along the 5th Avenue-facing side of Saks Fifth Avenue to a chocolate tree made of 225 pounds of chocolate at Godiva near Rockefeller Center to Bloomingdale's vintage-circus-themed extravaganza designed with a nod to "The Greatest Showman," the new musical biopic about P.T. Barnum starring Hugh Jackman and Michelle Williams. We rounded up some images to give you a peek at the splendor gracing Manhattan's streets.

THE EPIC HOLIDAY WINDOWS AT MANHATTAN'S ICONIC HIGH-END STORES ARE ONE OF THE CITY'S MOST BELOVED TRADITIONS.

New York City during the holiday season is packed with festivals, markets, and gorgeously decorated public space, and despite the crowds, lodging is sometimes more affordable this time of year than you might think.