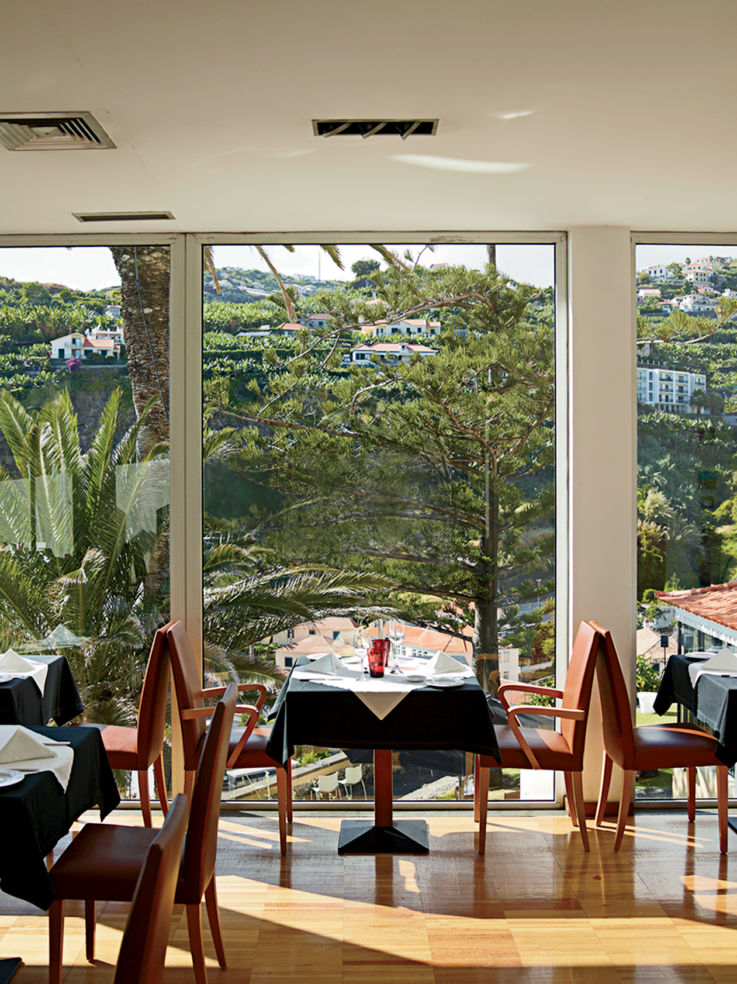 1 / 28 Photos
A view of the Hotel da Vila, in the village of Ponta do Sol, on Portugal's Madeira Island.
The pool at Hotel da Vila. Set on a beach overlooking the Atlantic in the fishing village of Ponta do Sol, the hotel always seems bathed in sunlight.
The clifftop restaurant at Estalagem, the sister property of Hotel da Vila.
Christian Kerber
Let the scenesters have South Beach. The eight-room Inn at Tilton Place, two hours to the north in Jensen Beach, swaps crowded pool decks and velvet-rope nightclubs for quiet coves and evening wine tastings on the front porch.
Sawtooth Hotel, in Stanely, Idaho is a 70-year-old log-cabin with all the rustic, small-town charm you'd expect: 100-year-old skiing gear mounted on the walls, a carved wooden moose grinning in the lobby, and the dining room's views of the jagged, snowcapped Sawtooth Mountains
The pool and outdoor bar at Hotel Le Marais, in New Orleans. Like many French Quarter spots, there is plenty of flash: The lobby is all bright colors, mirrored tiles, and party music.
A room at 3B, a four-room B&B in downtown Brooklyn that was opened in 2011 by a creative collective of entrepreneurs who happen to live downstairs.
Alan Vargas Favero and Diego Le Provost have opened what they believe is Mexico City's first fully green B&B: the eight-room El Patio 77
Le Mondaines Room at Hotel Chez Swann, in Montreal. Don't be fooled by the hotel's facade. The outside may be classic Tudor, but inside you'll find whimsical design touches that have become a signature of Montreal's boutique-hotel scene.
Sir F.K. Savigny, in the west Berlin Charlottenburg neighborhood, has all the same trappings as the swankiest spots (an aristocratic name, oversize black-and-white photos, a stylish wine bar), but at a bargain price.
The 300-year-old Devonshire Arms at Pilsley, a traditional pub with a few guest rooms upstairs, has stayed true to its roots even as the world around it has changed.
The 29-room Wanderlust Hotel in Singapore's Little India served as a schoolhouse in the 1920s, and it can still teach you a thing or two—this time, about the cutting edge of interior design. Each of the four floors has been handed over to a different local design firm, yielding a slew of wildly themed spaces.
The 252 in Cambodia may look like just another pretty space, with its silk linens and infinity pool surrounded by shaded loungers and potted palms. But the 19-room hotel, which opened in the capital city last year, is as much about doing good and volunteering in the community as looking good.
Architect Hijjas Kasturi and his environmentalist wife, Angela, spent three years renovating the three art deco buildings that constitute Hotel Penang, in Malaysia, using found materials from across the region in the 45 rooms.
When India's maharajas went on turn-of-the-century hunting expeditions, they did it in style, erecting opulent safari tents at every stop. That's the inspiration behind Amarya Shamiyana, a four-room encampment set in a grove of coconut palms on north Goa's tranquil Ashvem Beach. Here: a double room at the hotel.
La Vigna is a rustic, five-room B&B in Colonia Caldense, Uruguay.
You don't have to be a surfer to dig Casa de Olas, but it helps. Set atop a cliff overlooking the fishing village of San Juan del Sur, the hotel, whose name aptly translates to "house of waves," affords Pacific Ocean views, free shuttle service to local beaches, and proximity to some of Nicaragua's best breaks.
Hicksville Trailer Palace owner Morgan Higby Night isn't the first creative type to find inspiration in the rugged, lunar landscape of Joshua Tree National Park (see also: Gram Parsons, U2). But the Los Angeles-based writer and producer (Shortbus, Talking About Sex) has certainly taken his artists' retreat there to an audaciously kitschy level.
San Antonio may be a mere stone's throw from the Mexican border, but at the city's Hotel Havana, it's always been about Cuba.
After sustaining heavy damage in the 1978 fighting between the Vietnamese and the Khmer Rouge, the historic French colonial port of Kampot became a ghost town. Today, locals like Sophal and Keo Prom, who run La Java Bleue, are helping to bring it back to life.
Each of the eight rooms at Cocomama in Amsterdam includes decor that speaks directly to a stereotypical image of the Netherlands: a Warhol print of Queen Beatrix, blue-and-white Delftware comforters, windmill-shaped birdhouses on the walls.
Located in the heart of Bangkok's bustling central business district, Wow Bangkok's most surprising feature may be its serenity.
Johannesburg was founded in 1886, and that's where the hotel 12 Decades begins, too. Each of its 12 guest rooms is dedicated to a successive 10-year span in the city's evolution, with themed designs by 12 South African creative teams.
Once an athletic club for the upper crust, today Hotel 340 is home to a hotel (on the top three floors), plus the University Club of St. Paul, a chichi lobby bar, and, of course, an all-new 60,000-square-foot fitness center (free for guests).
With its striking Buddhist temples and fading French-colonial mansions, Laos's riverside capital prides itself on being a tranquil alternative to other Southeast Asian hubs. Inside the year-old Salana Boutique Hotel, this calmer sensibility prevails.
Even if you're not a morning person, you'll want to set your alarm at the Hotel Rocamar. The 32-room property sits mere feet from the Caribbean on a four-mile-long island off the Yucatan Peninsula, and every day dawns with a gorgeous sunrise over the sea.
Known for its international party scene, Goa has its share of generic beach resorts to cater to the pleasure-seeking hordes. Travelers more interested in privacy than partying would do well to detour inland to Siolim House, a seven-room retreat 15 minutes from the beach that recalls a more refined time.
Ndol lies only 94 miles outside of Bangkok, but with its Zen-like features—the sound of rushing water, orchids sprouting from tropical gardens, a lagoon-like swimming pool framed by towering trees—it might as well be in another universe.

Every so often, a hotel comes along that is both stylish and comfortable, close to the action and affordable. From the beaches of Mexico to the quaint courtyards of New Orleans, here are 26 properties that make the cut this year. You're welcome.