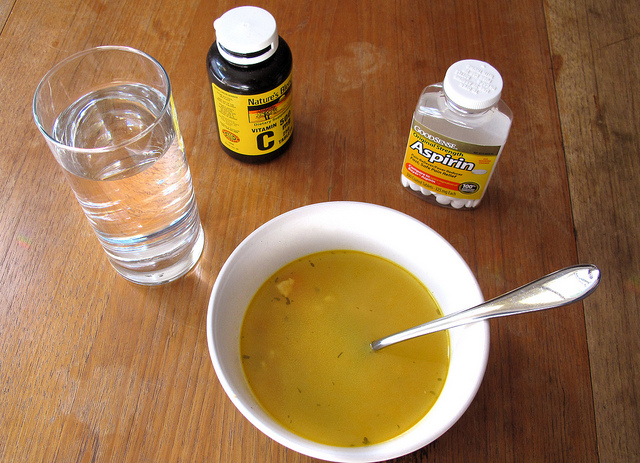 Nothing ruins a great trip like getting sick on the road. We found out the hard way during our family vacation to Italy this summer when my sister and I caught a nasty headcold and  found ourselves in the local drugstore trying to impress upon the pharmacist in a foreign language that we were looking for cold medicine. There's got to be a better way, we thought, and it turns out that there is—these four apps are here to help, whether you're looking for a doctor, emergency help in an unfamiliar place, choosing a restaurant with an adequate food-safety record, or trying to outsmart jetlag. Here are four apps designed to keep you healthy on your next trip.

ZocDoc
Find a doctor—by location, specialty, or insurance accepted—wherever you are. Available for iPhone and Android devices. Free.

StreetSafe
Connect with a personal guide (on the phone) for advice in an unfamiliar neighborhood and help in an emergency. Available for iPhone and Android devices. $19.99 monthly subscription required.

JetLag Genie
Design an alarm clock to gradually synchronize your sleep cycles with another time zone. Available for iPhone. $2.99.

DineSafe
Check a restaurant's food-safety records in the U.S. and Canada. Available for Android devices. Free.

We want to know: what are your favorite go-to health-related apps? Let us know below!

The Fall’s Most Travel-Inspiring Television Shows

Last Oscar season, we revealed our top picks for the most travel&ndash;inspiring films of the year. But why should the big screen have all the fun? This year, four television shows are inspiring a serious case of wanderlust. Make sure to check this list before you make any plans: Not every show is filmed where it’s set! Homeland Showtime, Sundays at 10 p.m. Without giving too much of the twisty plot away, season two of the Emmy&ndash;winning political thriller takes certain characters to Beirut amidst political turmoil. Instead of Lebanon, the show filmed in Tel Aviv and Haifa to capture the feeling of an old Middle Eastern city&mdash;think winding alleyways, sun&ndash;bleached buildings, busy marketplaces, colorful garb. (Check out the show’s YouTube channel for on&ndash;location videos: Part 1, Part 2, and Part 3.) Fun fact: The American version of Homeland is actually based on an Israeli hit called Hatufim (“Abductees”). Survivor: Philippines CBS, Wednesdays at 8 p.m. Season 25 of the reality juggernaut brings the castaways to the Caramoan Islands, an archipelago off the eastern coast of the Philippines. The islands have already hosted a number of international versions of Survivor, and it’s easy to see why: The mix of sandy beaches, waterfalls, lush green hills, and dramatic rock formations will have anyone hoping to get stranded for a few days. Revenge ABC, Sundays at 9 p.m. The glitzy soap opera charts one woman’s quest for, well, revenge in the high&ndash;class world of the Hamptons. But the show’s creators may be just as deceptive as Emily Thorne’s (Emily VanCamp) enemies: The series is not shot on location on Long Island! If you’re looking for the beach houses featured in the first season, you’ll want to head to North Carolina, especially in and around the beaches of Wilmington. Exteriors of Emily’s house from the series pilot were filmed in the nearby town of Southport&mdash;but all subsequent interiors are filmed on studio lots in California. 666 Park Avenue ABC, Sundays at 10 p.m. Looking to stop by the creepy apartment building in ABC’s new horror drama? If you head to 999 Park Avenue (near East 84th Street), where the fictional Drake apartment building is set, the neighborhood is reliably posh&mdash;but you won’t find the shows stars, Vanessa Williams or Terry O’Quinn, anywhere in sight. To see the actual Beaux&ndash;Art exteriors, you’ll have to cross Central Park to the Upper West Side: The Drake is actually played by The Ansonia, which is located at 2109 Broadway (between West 73rd and 74th Streets). Which new or returning shows have you packing your bags for a TV&ndash;inspired vacation? MORE FROM BUDGET TRAVEL The 10 Most Travel-Inspiring Films of the Year The 6 Most Inspiring Travel Films of the Year PBS's "Downton Abbey" Returns, and Travelers Plan Their Trips to England

Even the most experienced cruises would benefit from downloading these three apps that give you the inside scoop on all the boats before you board and the ports you'll be visiting along the way. PortPal Make the most of your shore excursion with weather updates, ship itineraries, and guides to over 800 ports. Available for iPhone, free Cruise Finder Search deckplans, photos, and schedules for 220 ships across 20 cruise lines. Available for iPhone and Android, free Cruise Cam Take a peek through the webcams of nearly 100 ships and 150 ports worldwide. Available for iPhone, $1.99 Rather spend your vacation on dry land? Download our Ultimate Road Trips app today! MORE FROM BUDGET TRAVEL 10 Common Cruise Myths—Debunked 12 Top Tips from the World's Best Cruisers Your Top 5 Money-Saving Cruise Questions—Answered

Their names&mdash;Advantage, ACE, E&ndash;Z, Fox, Payless, Triangle&mdash;don't exactly ring a bell. In fact, you might not realize they're in the rental car business. Yet in recent years, as the rental industry has boomed, regional and off&ndash;brand rental companies have been making more of an impact, thanks to Kayak, Priceline, and other websites that include lesser&ndash;known (and less advertised) companies in their searches. Are they worth taking for a spin? In general, the answer is yes. Regional companies typically offer the same cars as their bigger competitors and at a better price, says Neil Abrams, president of Abrams Consulting Group, which tracks car rental trends. Prices vary widely depending on company and location, but you can save up to $20 per day by going off&ndash;brand, says Abrams. For example, Advantage Rent a Car, a subsidiary of Hertz with more than 100 facilities worldwide, will book you a Chevy Aveo or Cobalt for under $130 a week at Hartsfield&ndash;Jackson Atlanta International Airport in mid&ndash;September; an economy car from Enterprise at the same location will run you more than $250. Some of these smaller companies also have loyalty programs just like the big boys. Members of Payless Perks Club, for example, can save up to 5 percent on rentals. E-Z Rent-a-Car, which has 36 locations worldwide, gives its program members up to 2 percent off all rentals, and its Facebook fans get 3 percent off on top of that. On the other hand, these smaller companies sometimes aren't partnered with airlines to offer frequent&ndash;flier miles. The booking process&mdash;reserving online or on the phone&mdash;will be the same as you're used to, and insurance rates will be comparable to the major agencies, too. But ask if there's a fee for returning the car to a different location&mdash;or if you can even make a one&ndash;way rental at all. Some indie companies don't have storefronts nationwide, which could limit potential drop&ndash;off choices. Overall, inconvenience is the price you'll pay for a better deal. There could be longer lines at check&ndash;in and longer wait times on the phone. But not all indie customer service is under&ndash;whelming: ACE Rent a Car ranked highest in customer satisfaction in a recent J.D. Power and Associates survey, beating out Avis, Hertz, and the rest. One recent renter told us that he experienced long lines at the LAX counter of Payless Car Rental, which has 80 locations worldwide, but he saved $100 over four days compared with a major agency. "For the price, I'd put up with that slight pain again," he says. You may also have to let go of easy airport access. Triangle Rent a Car, a family&ndash;owned company in the Southeast, picks renters up at four airports and shuttles them to offices that are up to 20 minutes away. Research your company's location before you fly: Fox Rent a Car, for instance, has 20 U.S. offices, but some are not located with the other agencies and others are off&ndash;airport entirely. Think of it as the new rules of the road: Trade a little time for a decent chunk of change. &mdash;Hannah Wallace MORE FROM BUDGET TRAVEL: Introducing Budget Travel's Ultimate Road Trips App! 5 Classic American Drives 7 Tricks for Getting Gas for Less

According to a recent survey by the American Automobile Association and Best Western International, 51% of Americans choose to take their pets on vacation with them whenever they can. Whether you fall into that category, or the category that believes that Fluffy would be happier at home, a host of new services have cropped up in the last two years to help you out. If you want to leave Fluffy home: Two new websites, DogVacay.com and Rover.com, have taken the AirBnB model and are applying it to dog-sitting. Banking on the concept that it is more affordable than a kennel AND more comfortable for the dogs, these companies aim to match dog-owners with pet hosts. Both screen hosts and then list them by profile. Pet owners can than browse the profiles and search based on criteria such as whether you want 24/7 supervision or a home with other dogs. DogVacay launched in March 2012 and has over 150 cities in its roster, including New York City and Los Angeles. Rover.com launched in November 2011 and currently operates in 52 cities including Los Angeles, Washington, D.C., and Boston. Prices range depending on what hosts want to charge, but a quick search in New York City suggests that the prices on both sites are comparable&mdash;you're looking at from $30 to 50 per night on average. If you can't envision a vacation without Fluffy: Traveling with Fluffy? Check out Pet Hotels of America. The site, which launched in March 2011, is one of the first companies to let you search&mdash;and book&mdash;pet-friendly hotels directly from their website. They currently operate out of 17 cities and represent 25,000 pet-friendly hotels (in some cases they've worked with the hotels to secure special discounts for pet owners). The site is also a great resource for pet-owners, with pages that list airline policies for pet travel as well as location-specific info such as pet-friendly gardens, pet hospitals, and on-and-off-leash beaches. Have you tried any of these services? If so, tell us what you think below. SEE MORE FROM BUDGET TRAVEL: Priceline Puts a Fresh Spin on Booking Hotels Blindly Cancelon Lets Travelers Resell Hotel Reservations They Can't Cancel Will Baggage Claim Soon Be a Thing of the Past?