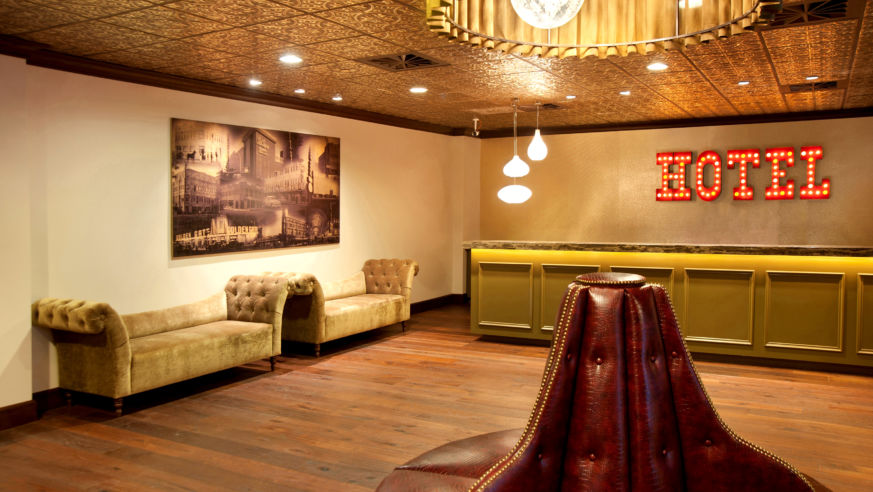 Las Vegas has a Burlesque Hall of Fame, the Mob Museum, the Neon Museum (more on that in a minute), and all kinds of other institutions that focus on aspects of Sin City's heritage. There is, however, no official establishment that puts the city’s history on display. For that you can turn to the Golden Gate Hotel and Casino.

The hotel, located off The Strip, has all the glitz and bravado of the familiar Las Vegas resort, but what makes it notable is not an elaborate theme park-like vibe or lavish fixings. Yes, it’s a tremendous property with 122 rooms and a sprawling 24-hour casino (as if you need reminding that a Vegas casino is 24-hours), but its main attraction is in the fine details. You don’t have to look too hard to see that property is a veritable time capsule and if you know where to look and who to ask, you can pick up nuggets of local history that are as captivating as watching the resident card shark clean up at the blackjack table.

The hotel was built in 1906, and one of the regular visitors was none other than Dean Martin. He had a fear of flying, so he always came to down on the bus. Today you can still spot the Greyhound station across the street from the main entrance.

A display cases in the hotel lobby exhibit original betting ledgers and antique telephones, the latter in honor of the Golden Gate having the first working phone in the city. The phone number? “1.” In what we can only assume is a nod to its telecommunications claim to fame, the last four digits of the hotel’s main phone number today is 1906, the year is opened.

When the Golden Gate first opened at the turn of the 20th century, there were 106 guest rooms. Then in 2012, having endured countless design styles and American movements, the hotel built an entirely new five-story tower. It’s connected to the original structure seamlessly in terms of design, but its forward-looking design and engineering elements are astounding. For instance, it was the first cement hotel in the country. And elevator in the addition runs on energy generated by the elevator itself on each trip downwards. It's the first of its kind in the state and 16th in the world. Additionally, the water in the rooms are heated by geothermal wells.

The original rooms have all been renovated and outfitted with thoroughly modern amenities, motion-sensor climate control, like flat-screen TVs and iHome clock radios.

Rooms range from a standard set-up to luxury suites to two posh penthouses and they feature design touches that pay tribute to various styles that defined the 20th century. Art Deco accoutrements, for one, range from lamps to the pinstripe-inspired carpet patterns. And speaking of carpets, don’t miss the floor coverings in the casino. New carpeting, laid down in 2012, has a design reminiscent of Art Deco patterns.

Any hotel on The Strip boasts The Strip as a main attraction. The Golden Gate is located in what’s considered Vegas’s Downtown, which is less than five miles from the Bellagio and the rest. But while you don’t get fountains that put on a Broadway-caliber show or buildings that make you feel like you’re at a World’s Fair, you don’t have to trade off any of the raucous, late-into-the-night revelry. One of the hotel’s entrances opens right out onto the Fremont Street Experience, a lively four-block-long pavilion-like street that features a 10-story tall video screen that shows jaw-dropping light shows at the top of every hour from 6pm to 1am.

The property is less than a mile stroll to the fantasy-tinged Neon Museum, an engaging institution that features, among other things, a “boneyard” of gargantuan signs of light bulbs, neon tubing, a study of the intersection of kitsch and class. They tell the story of iconic restaurants and hotels that have risen and fallen since Vegas became a destination for its flash and glamour and American soul. There’s The Golden Nugget sign from 1961, with neon reaching up to three stories in height. There’s the Moulin Rouge’s sign from 1955, marking the first integrated casino. Treasure Island Casino’s hulking pirate skull. When taken as a whole, the relics chronicle the joys and fears of a nation. You’ll learn, for instance, that when the Russians launched Sputnik in 1958, all things pointed to atomic testing, both in the news and in culture. Thus, all kinds of imagery of atomic-themed beauty contests and the 19-story sign for the luxurious, mobster-run Stardust, its name spelled out in jagged-edged letters like an animated explosion. The hotel was imploded in 2007.