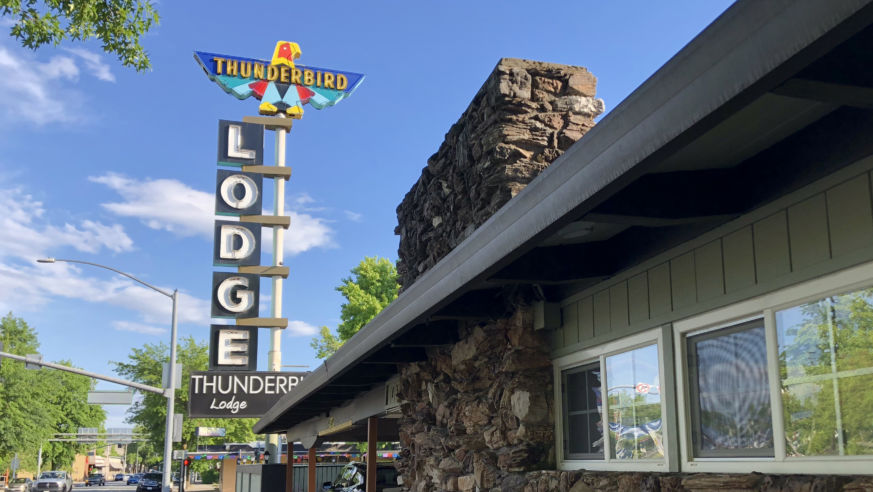 Just a few hours north of Sacramento and a couple hours south of Oregon, tucked away among protected parkland, volcanoes, redwoods, and more waterfalls than you can shake a stick at, northeastern California’s Shasta Cascade region is a veritable haven for outdoor enthusiasts. But you don’t need to be a card-carrying member of the REI Co-Op to appreciate the area’s natural beauty—there’s a ton here for all skill levels to explore. With clean, freshly appointed rooms, reasonable rates, and a convenient central location, the Thunderbird Lodge in Redding, California, makes a great base of operations, especially if you’re planning to spend most of your time on the go.

This classic roadside motel was originally part of the mid-century Thunderbird chain; today, there are only a few left in existence, and they’re all independently owned and operated. An immigrant couple from Zambia bought Redding’s Thunderbird Lodge nearly 20 years ago, and their sons and daughters-in-law took over operations in 2010. (Thankfully, the vintage sign remains the same.)

The property was completely remodeled in 2015, and its 58 guest rooms now feature contemporary dark-wood furniture, white linens with pops of color via accent pillows, throws, and bed skirts, and flat-screen TVs, refrigerators, and microwaves, all in various configurations. Book a king, queen, or double-queen room for a short stay; if you’re planning on sticking around a bit longer, consider a kitchenette room, which comes equipped with proper cooking facilities. The ground-floor accommodations are perfectly fine, but if you can handle the stairs, book a room one flight up, where the vaulted ceilings and exposed beams offer an airier, much more spacious feel.

Located right in the middle of downtown Redding, the Thunderbird is walking distance to landmarks like the Cascade Theatre, a circa 1935 nonprofit venue that hosts concerts, dance performances, and free summer kids’ movies; there’s also an array of independently owned restaurants, breweries, and shops within a few-block radius. The motel isn’t far from the freeway either, so it’s easy to get out of town to explore the region’s outdoor attractions—it’s a quick drive from downtown to Lake Shasta Caverns, Whiskeytown Lake, the immense, 602-foot-high Shasta Dam, and waterfalls upon waterfalls upon waterfalls.

There are a few vending machines on the property, and the motel offers a basic continental breakfast, but other than that, you’ll have to look elsewhere for sustenance. Luckily, there are some solid options nearby. For a no-frills, pre-hike diner meal, Corbett’s should do the trick—it’s right across the street and opens at 7:00 a.m., so you can fuel up and be on the trail nice and early. The motorcycle-themed Coffee Bar is a little further, but it’s worth the walk for the consciously sourced caffeine and tidy selection of pastries and small bites. (You’re in California, after all, so be sure to try the avocado toast.) Open only for lunch, Wilda’s Grill is infamous for its Buddha bowl, a heaping helping of beans, rice, and protein under a shower of avocado, cilantro, and shredded cabbage, a steal at $7.50. With a cheap lunch, you can treat yourself to a fancier dinner, and Moonstone Bistro serves pretty plates of seasonal, organic fare at the price point to match. Grab a table in the intimate, dimly lit dining room or take seat on the patio (the strip-mall view is terrible, but on a nice evening, the fresh air is worth the sacrifice), have a cocktail and a few appetizers, and don't pass on the bread plate. To keep things casual, beer-drinkers would do well to commandeer a spot at the bar at the family-owned Woody’s Brewing Co., order a round of tater tots—or, as my bartender more accurately described them, fried mashed-potato balls—loaded with blue cheese and bacon, and enjoy with a pint of microbrew. Final Draft Brewing Company is another local favorite within walking distance. Finally, awesomely, there’s a branch of Heavenly Donuts, a mini-chain with six locations in the western United States, just two doors down from the Thunderbird. The drive-thru window is open 24 hours, and they serve a ridiculously good strawberry-jelly donut. Consider yourself warned.

The Thunderbird is Fido-friendly, with a charge of $15 per pet per night. Parking is included with the room rate, but the space is tight and can be tough to navigate, especially on weekends. WiFi and continental breakfast are also free, and there’s a small pool on the premises that’s clean and well-maintained.