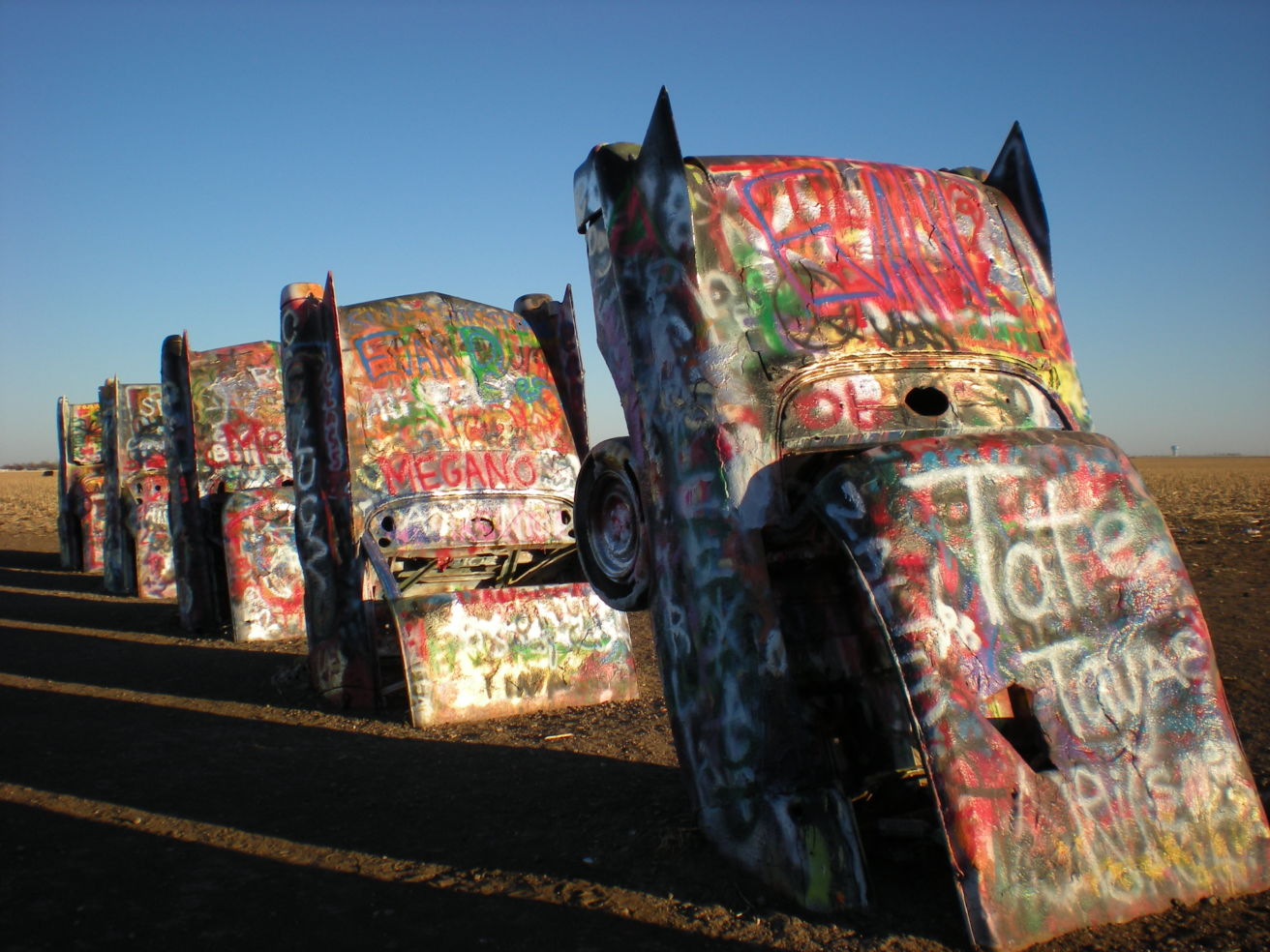 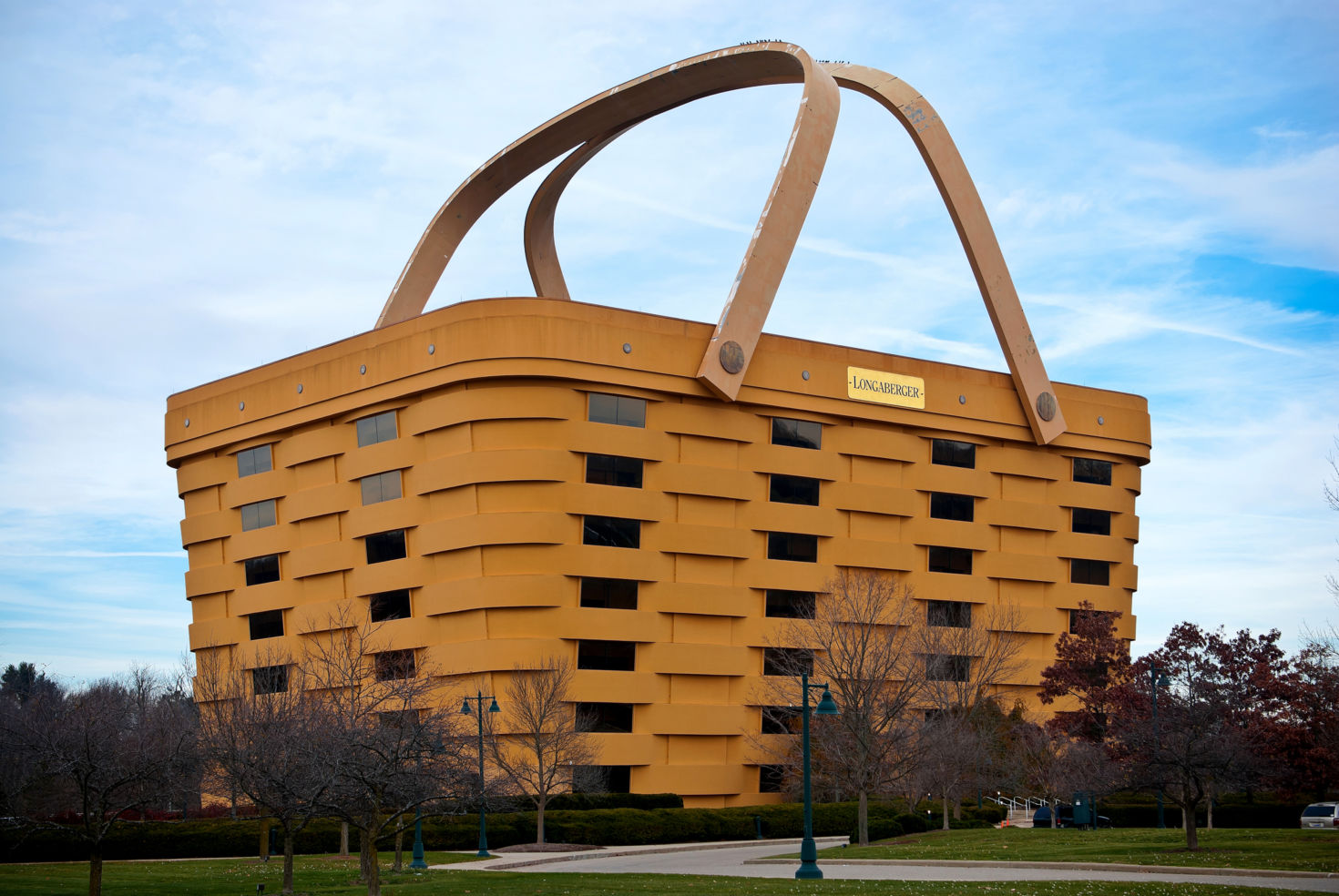 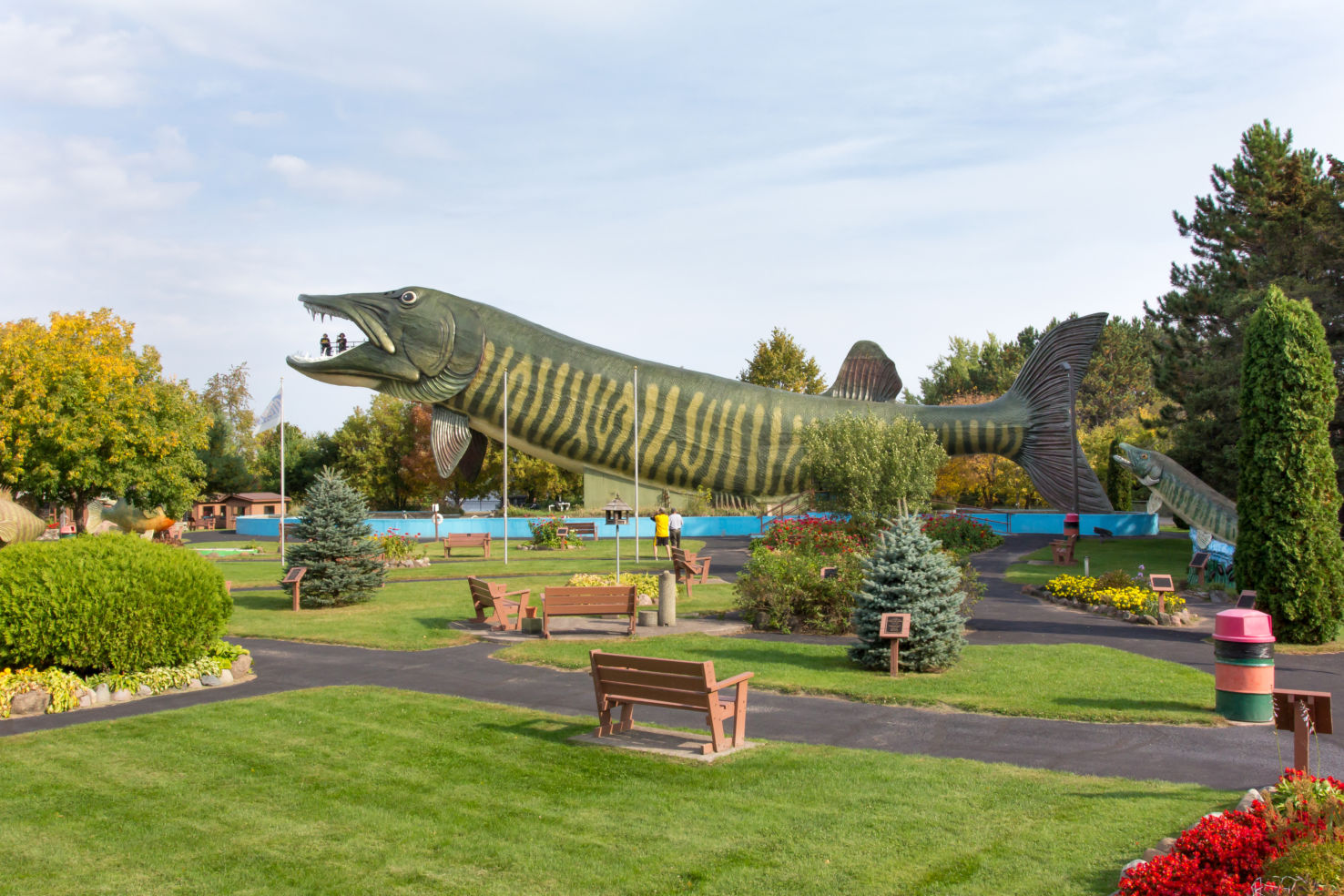 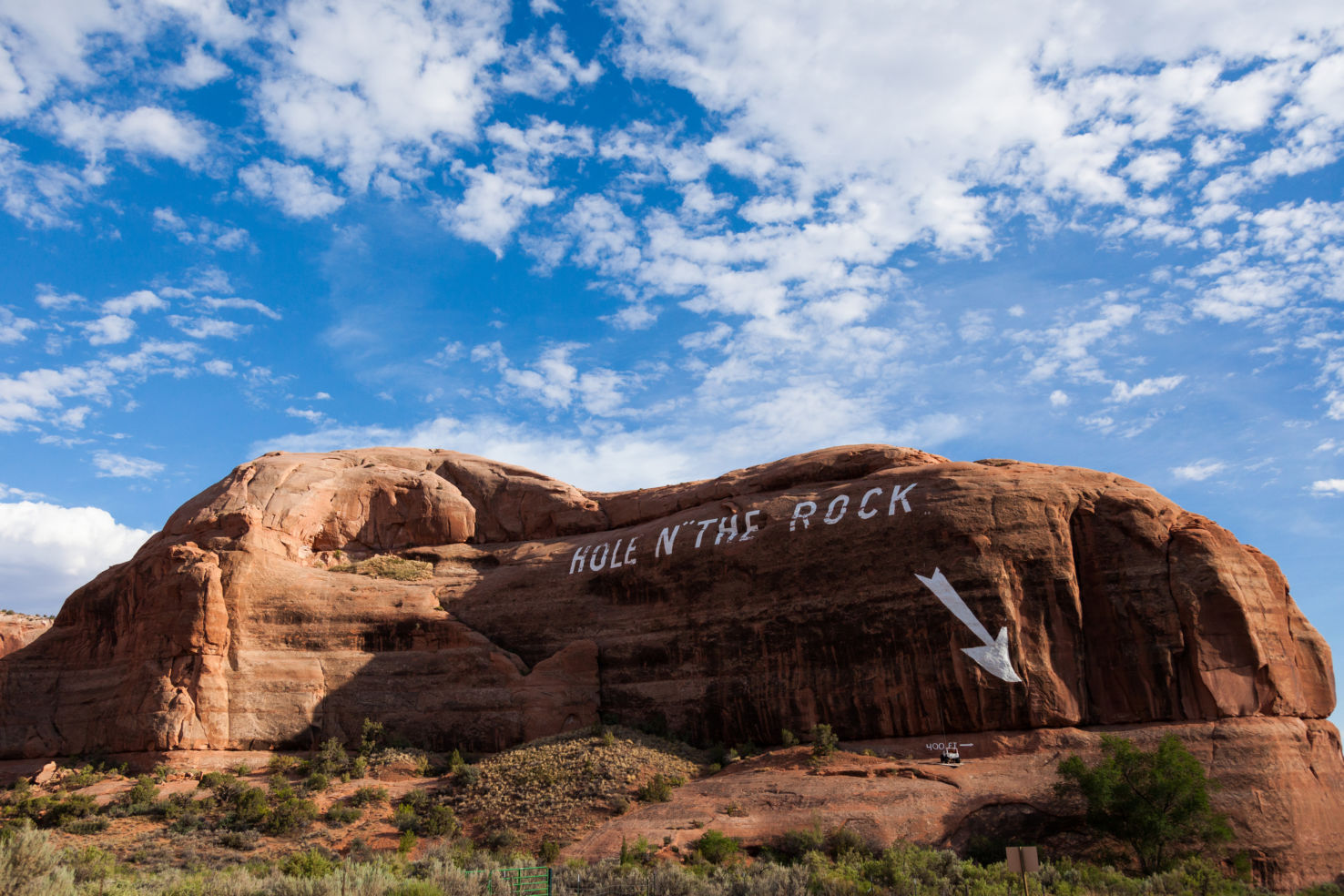 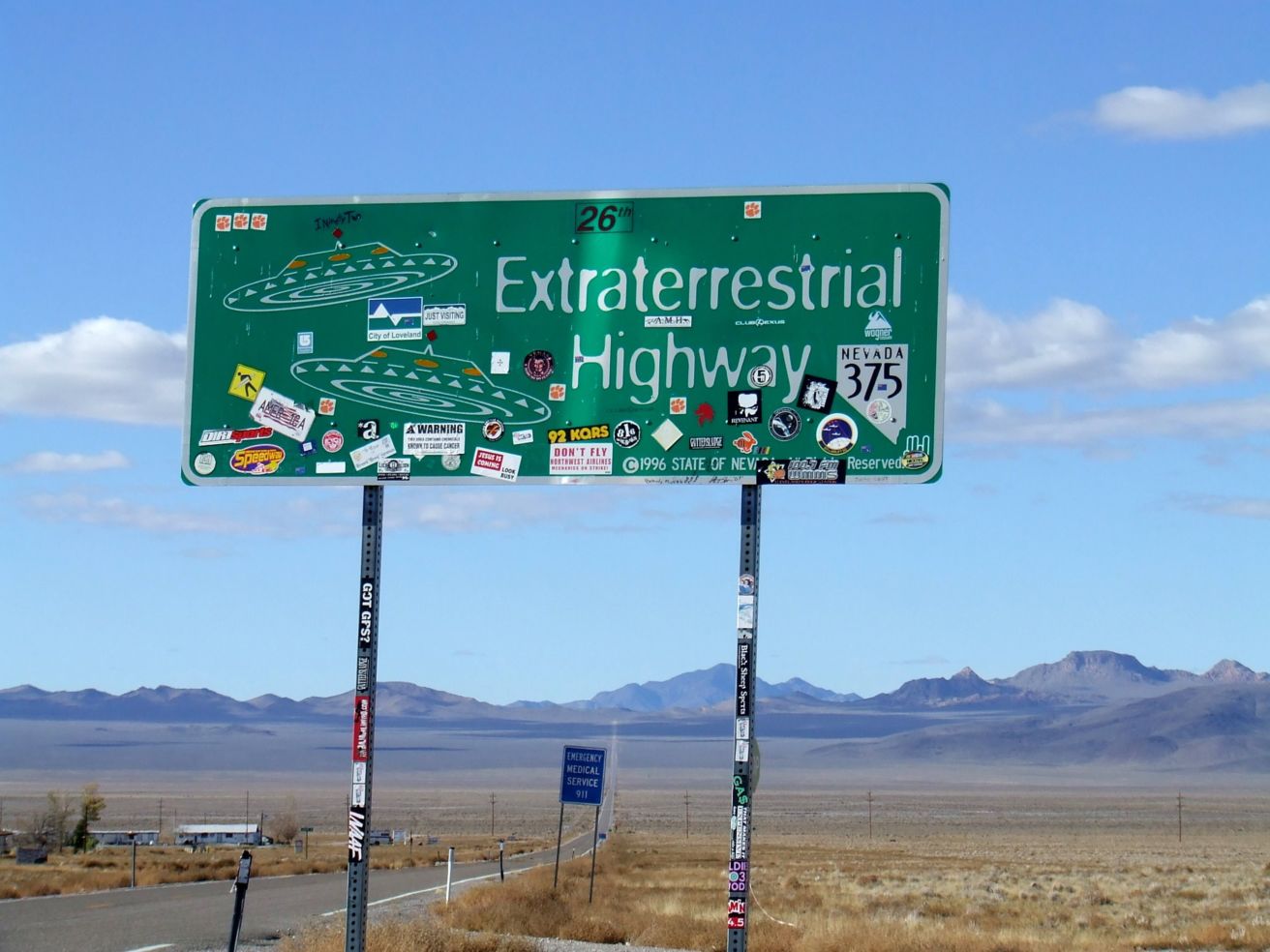 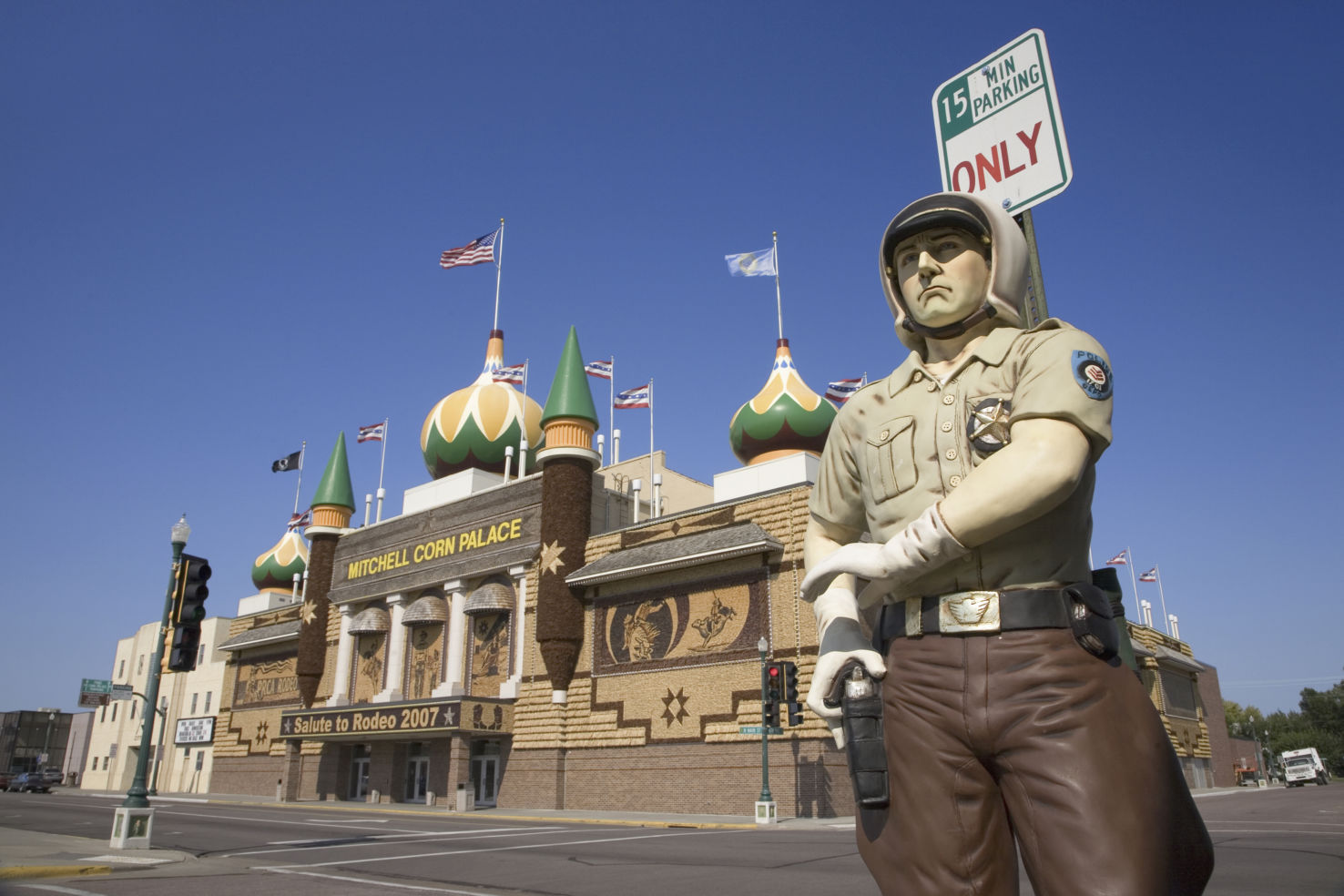 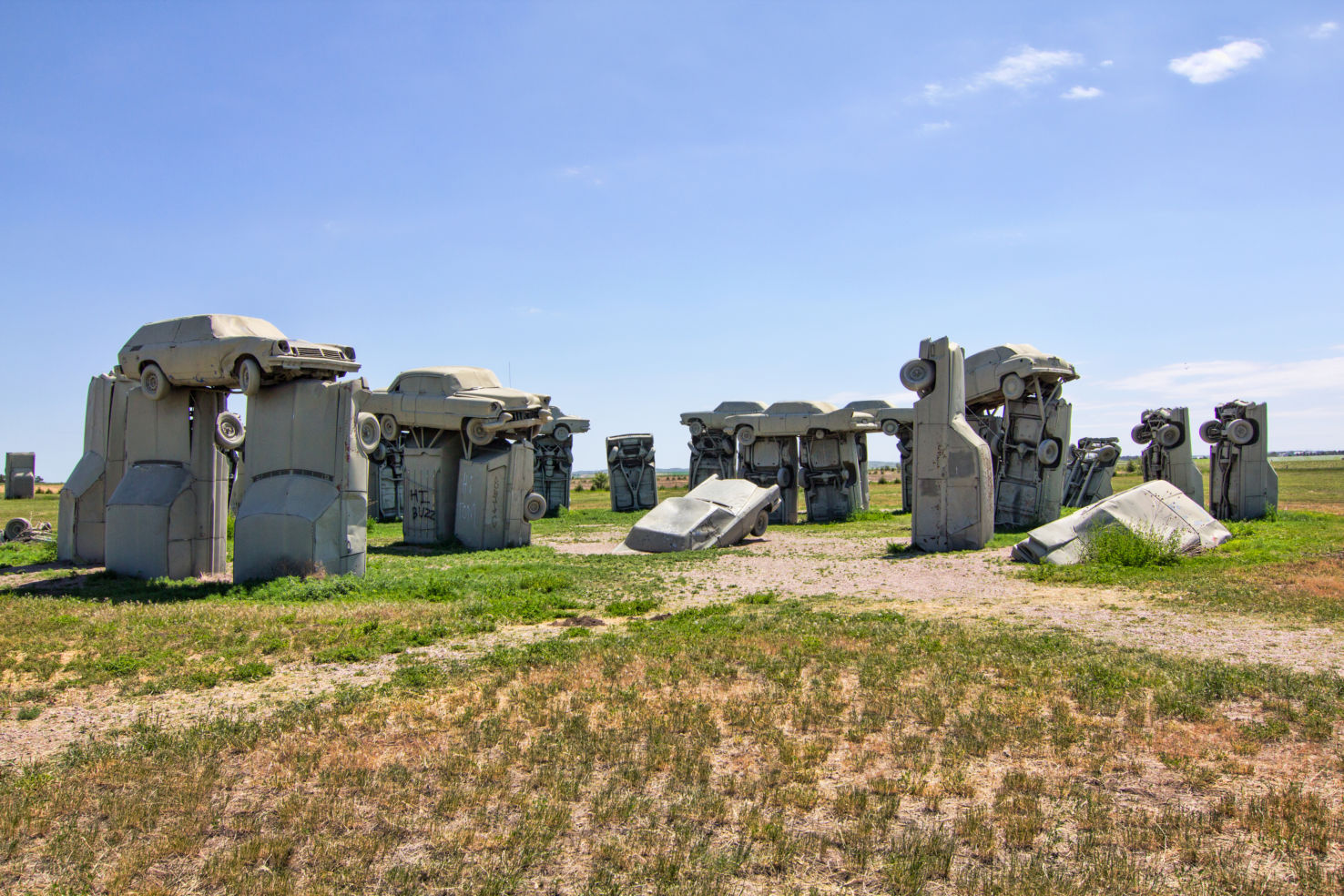 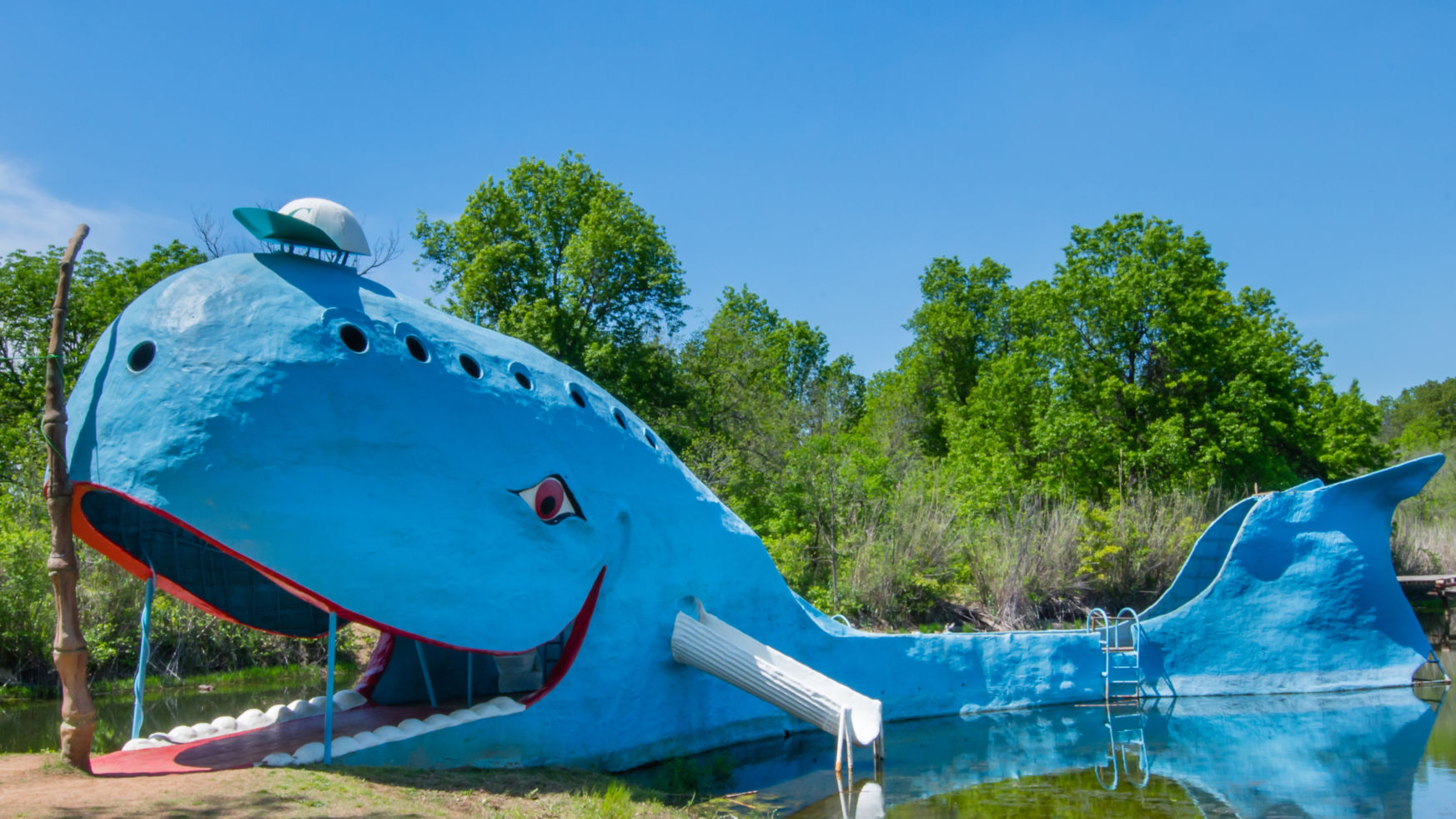 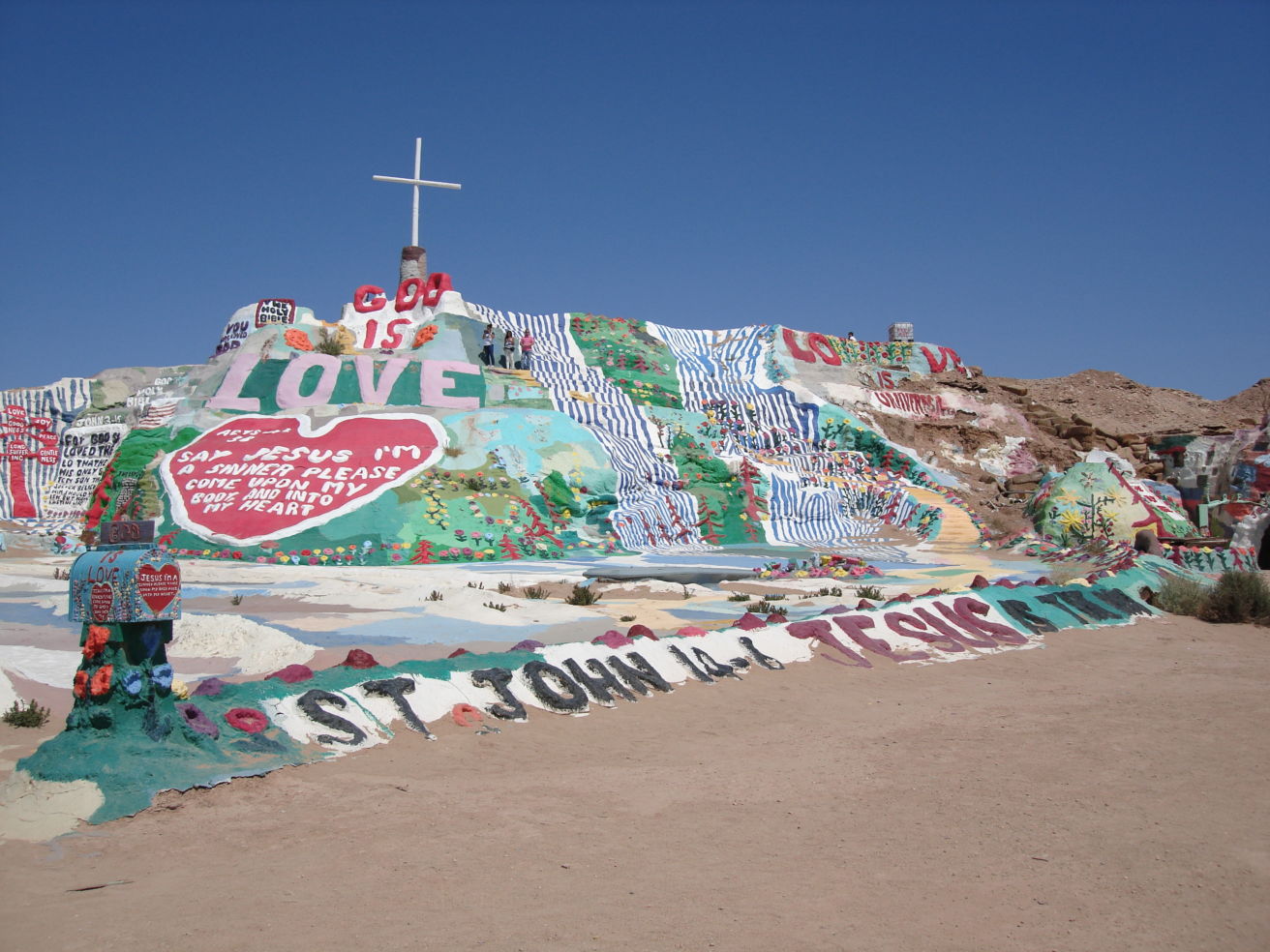 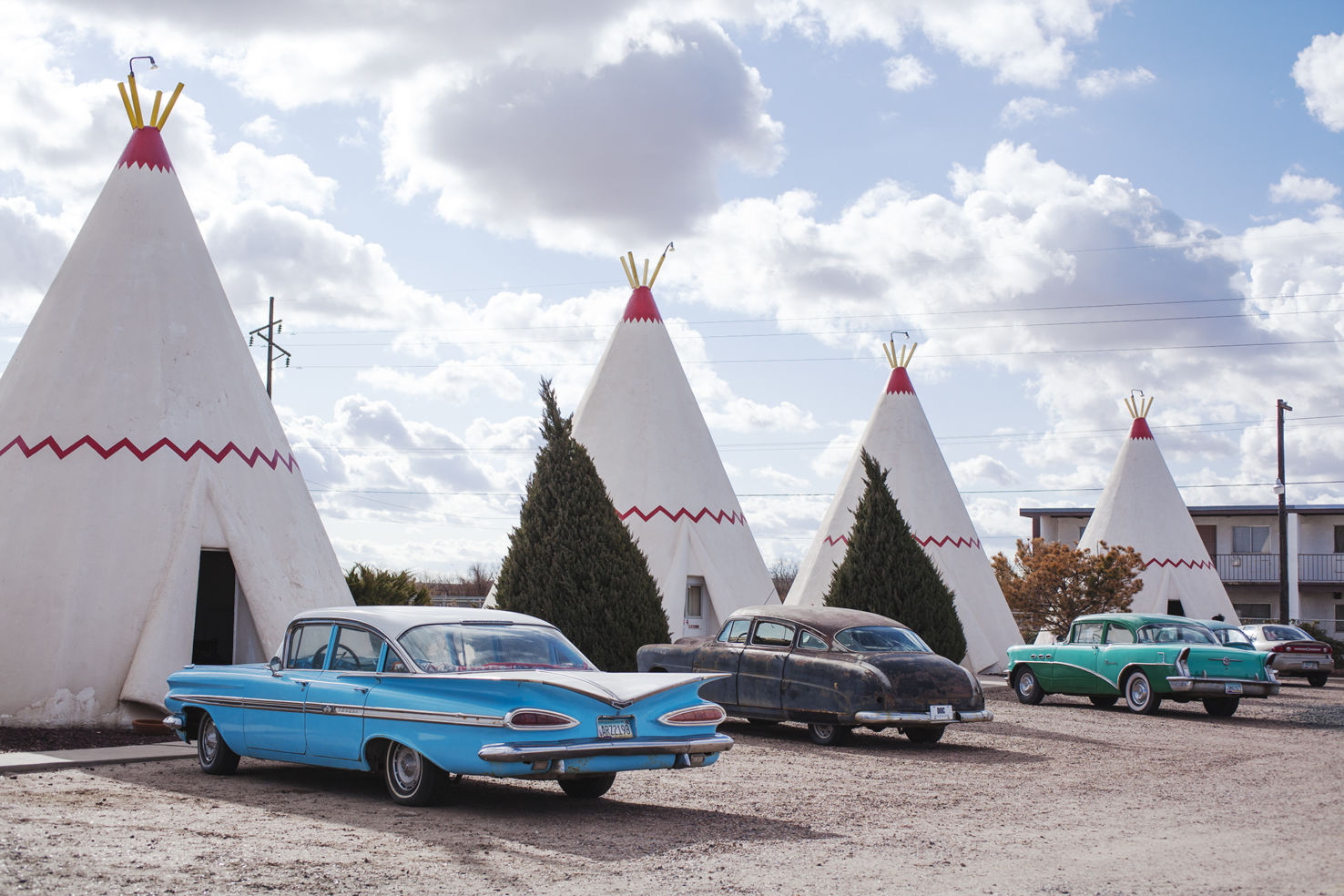 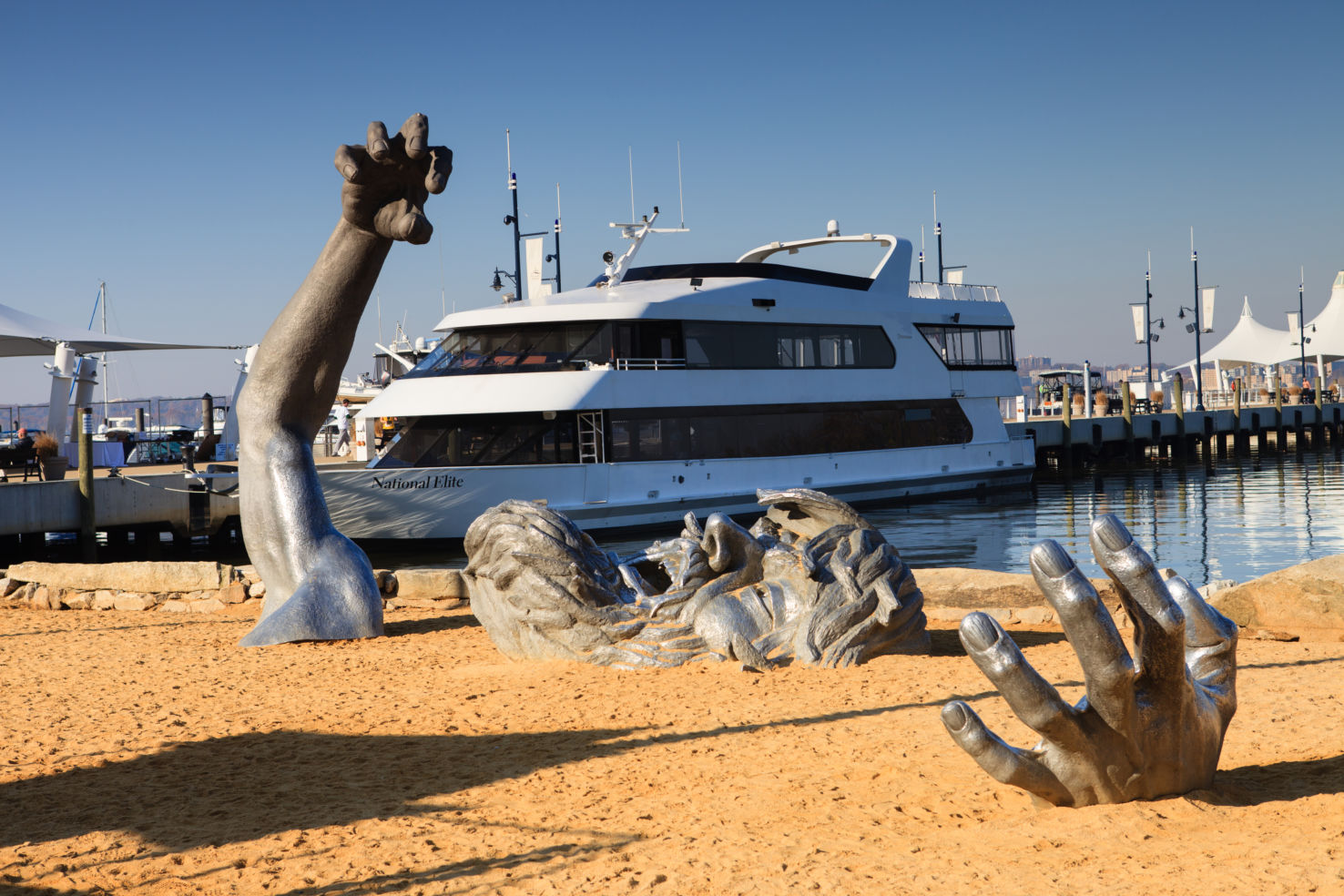 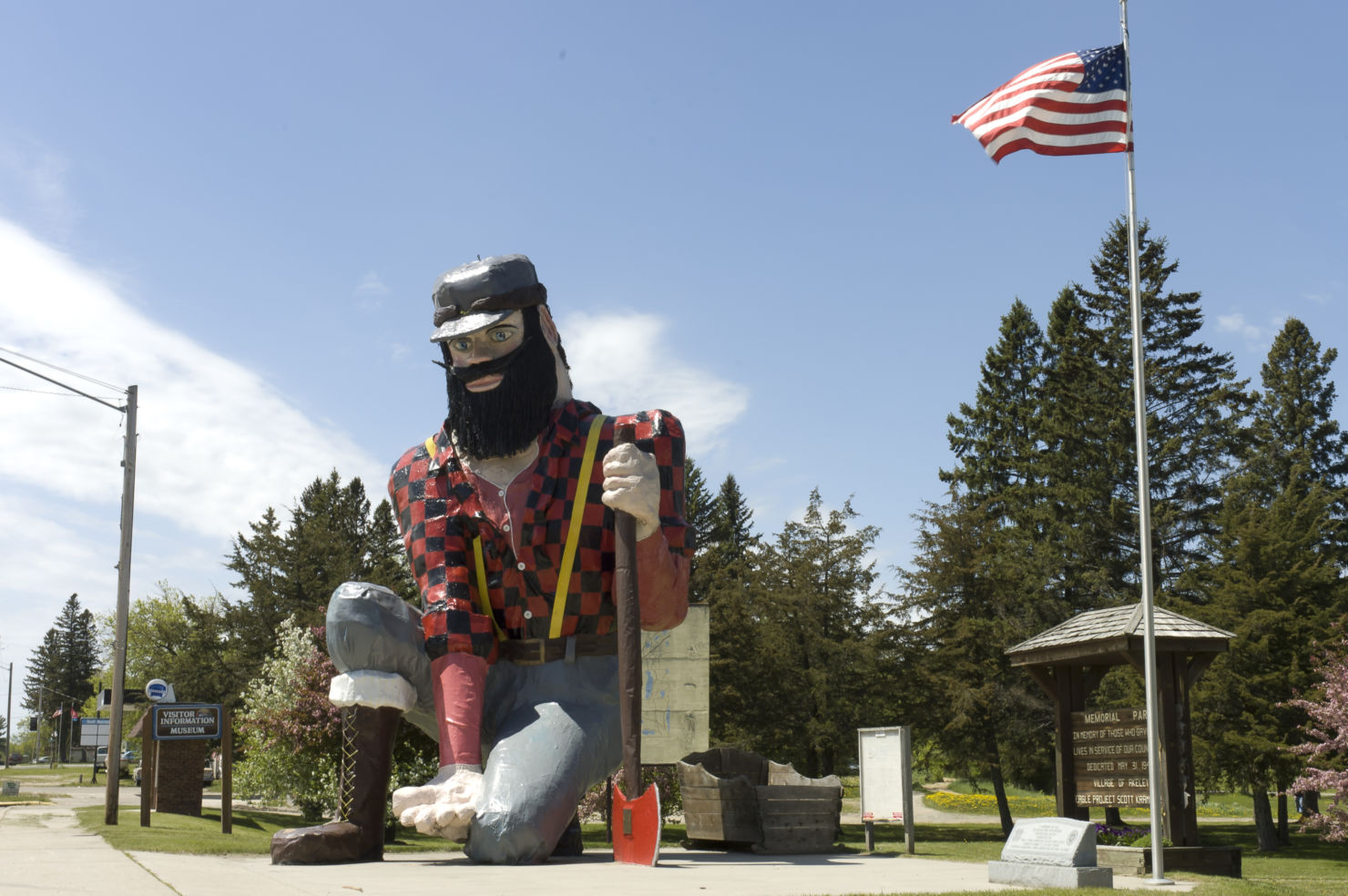 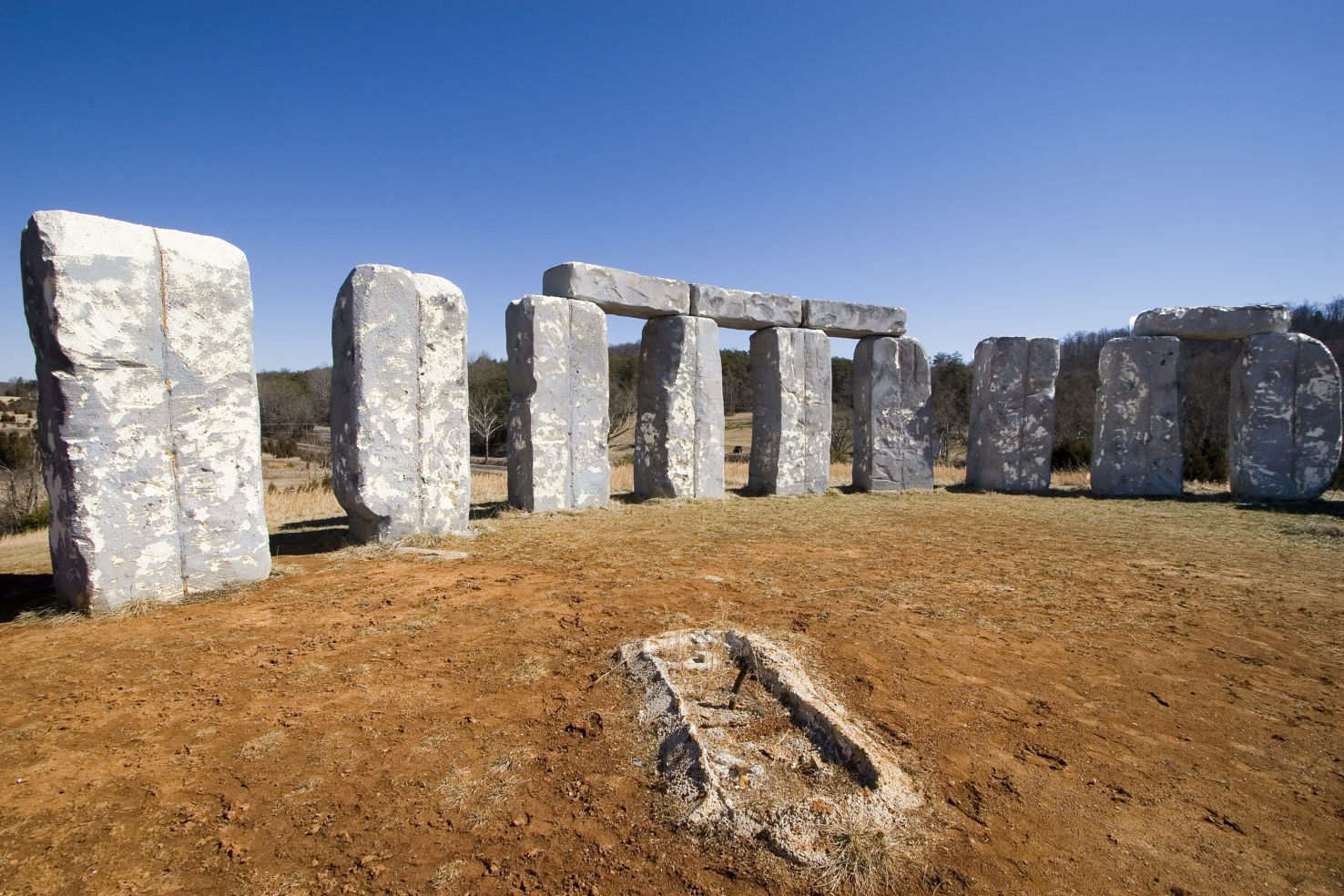 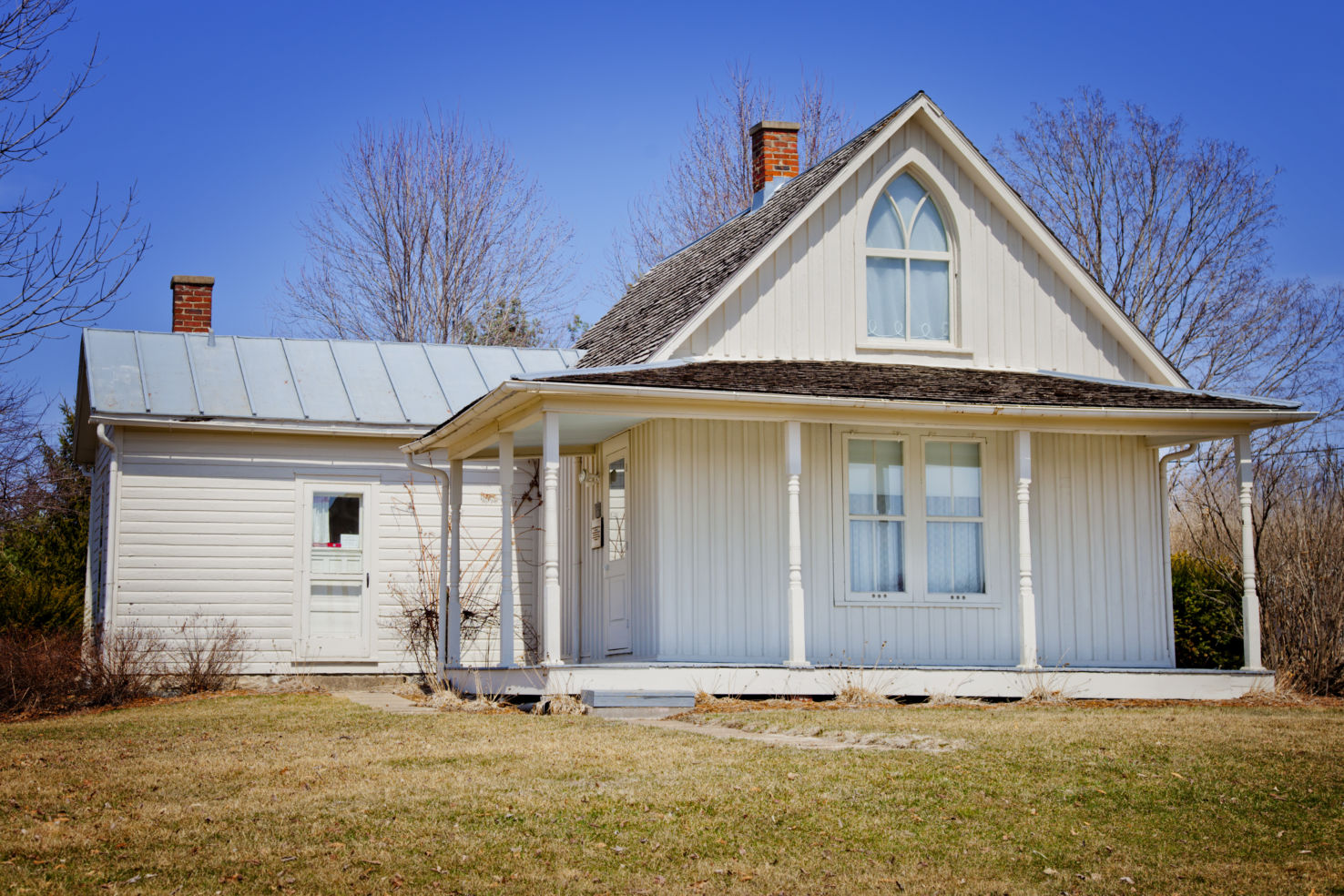 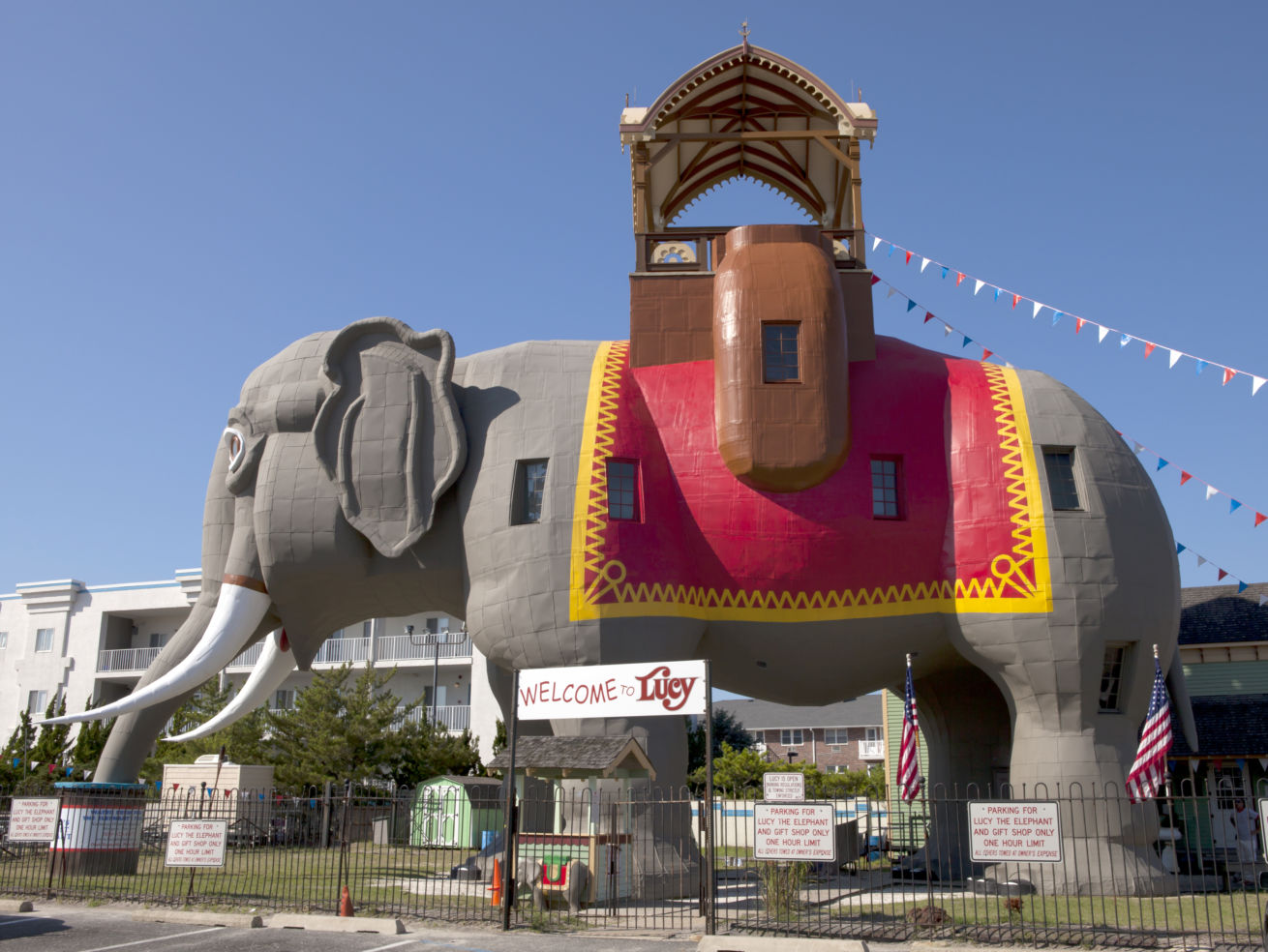 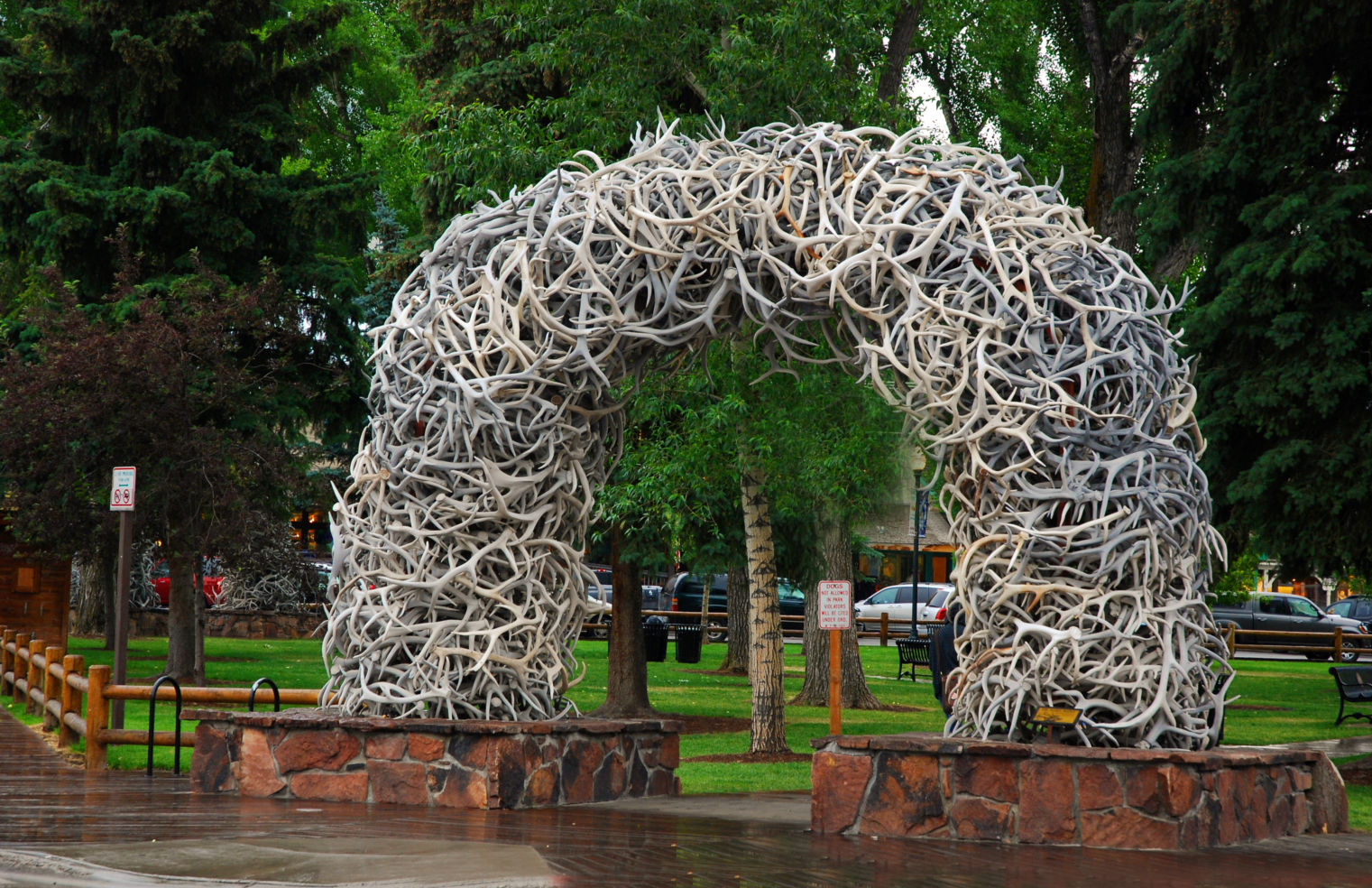 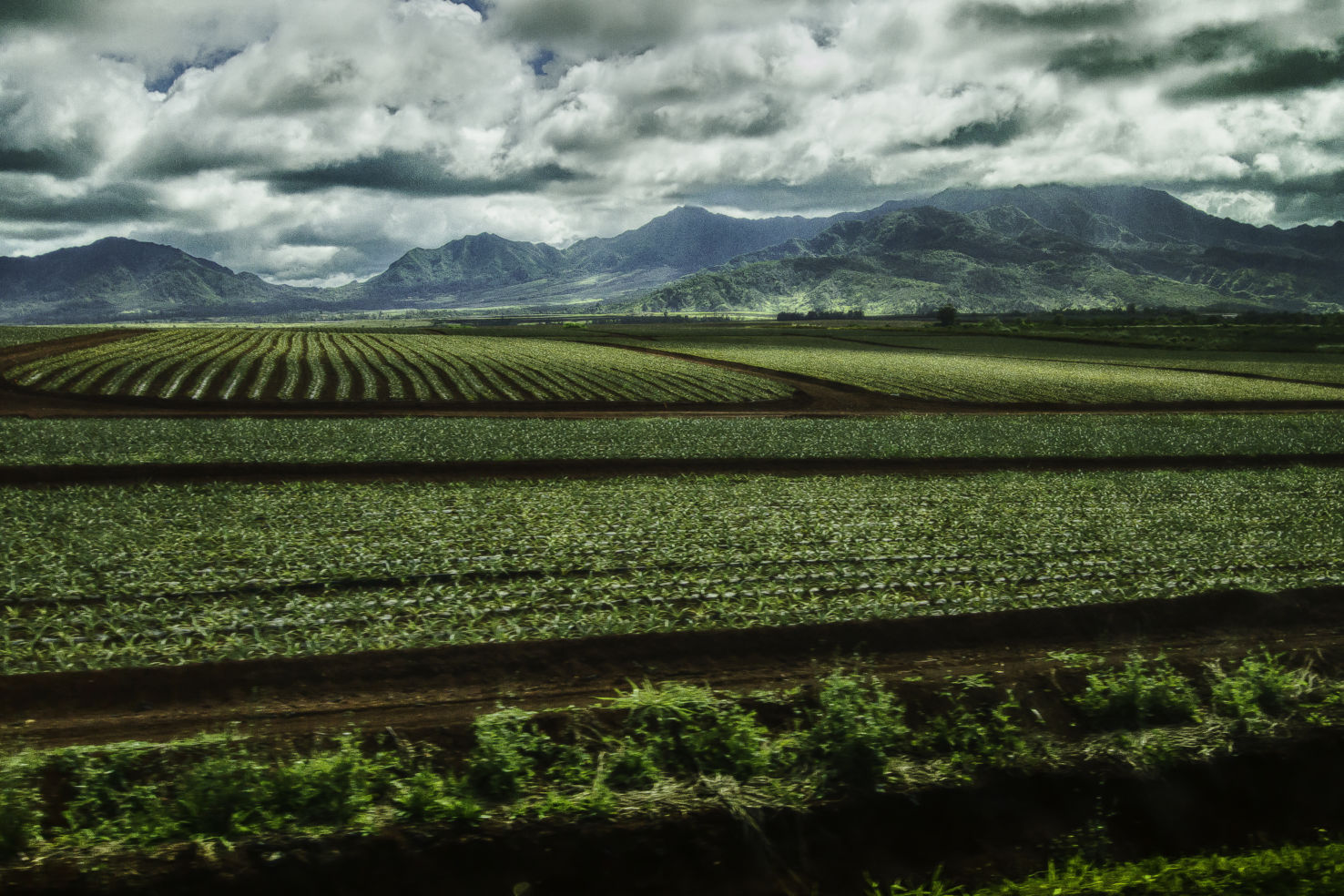 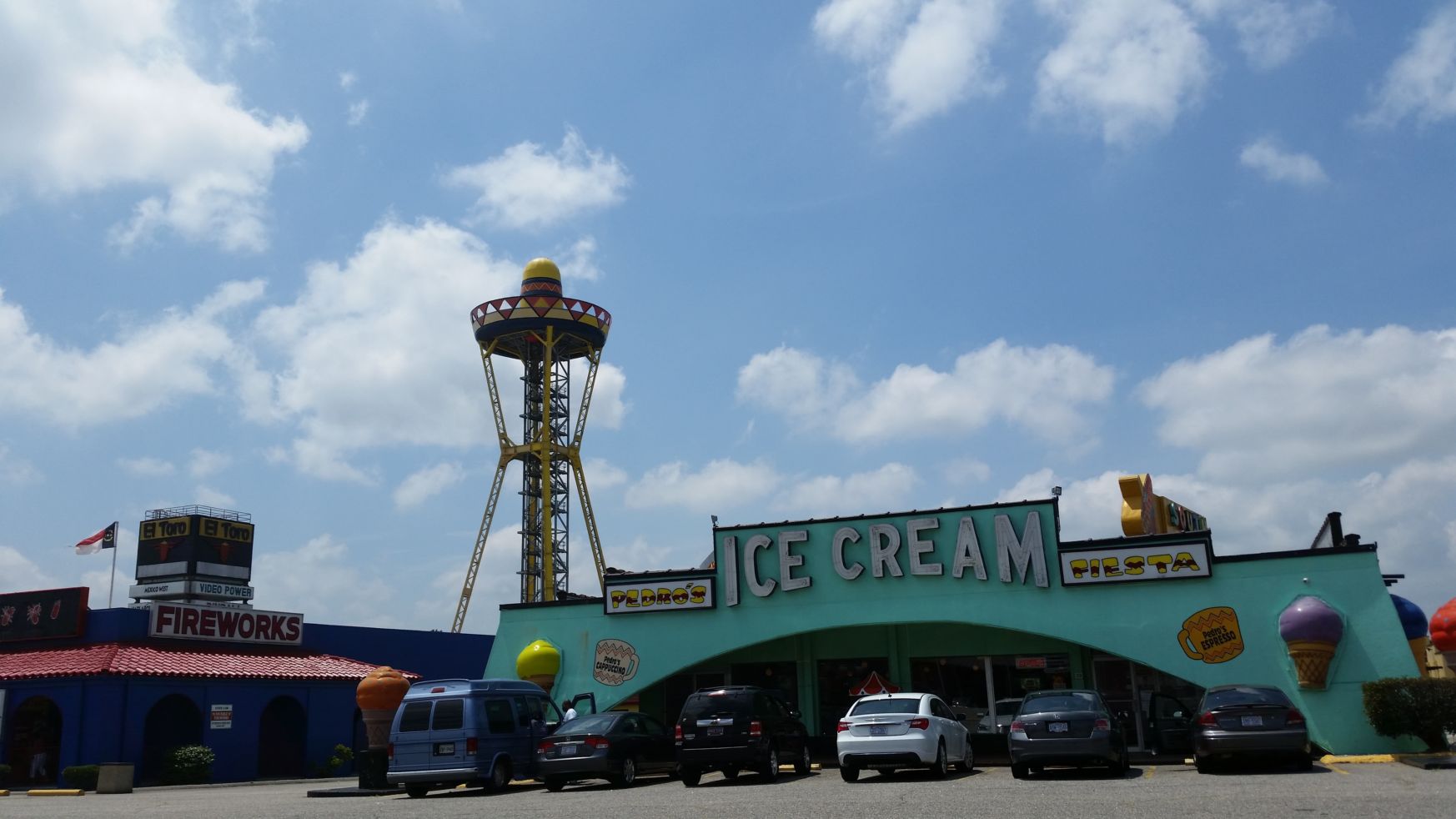 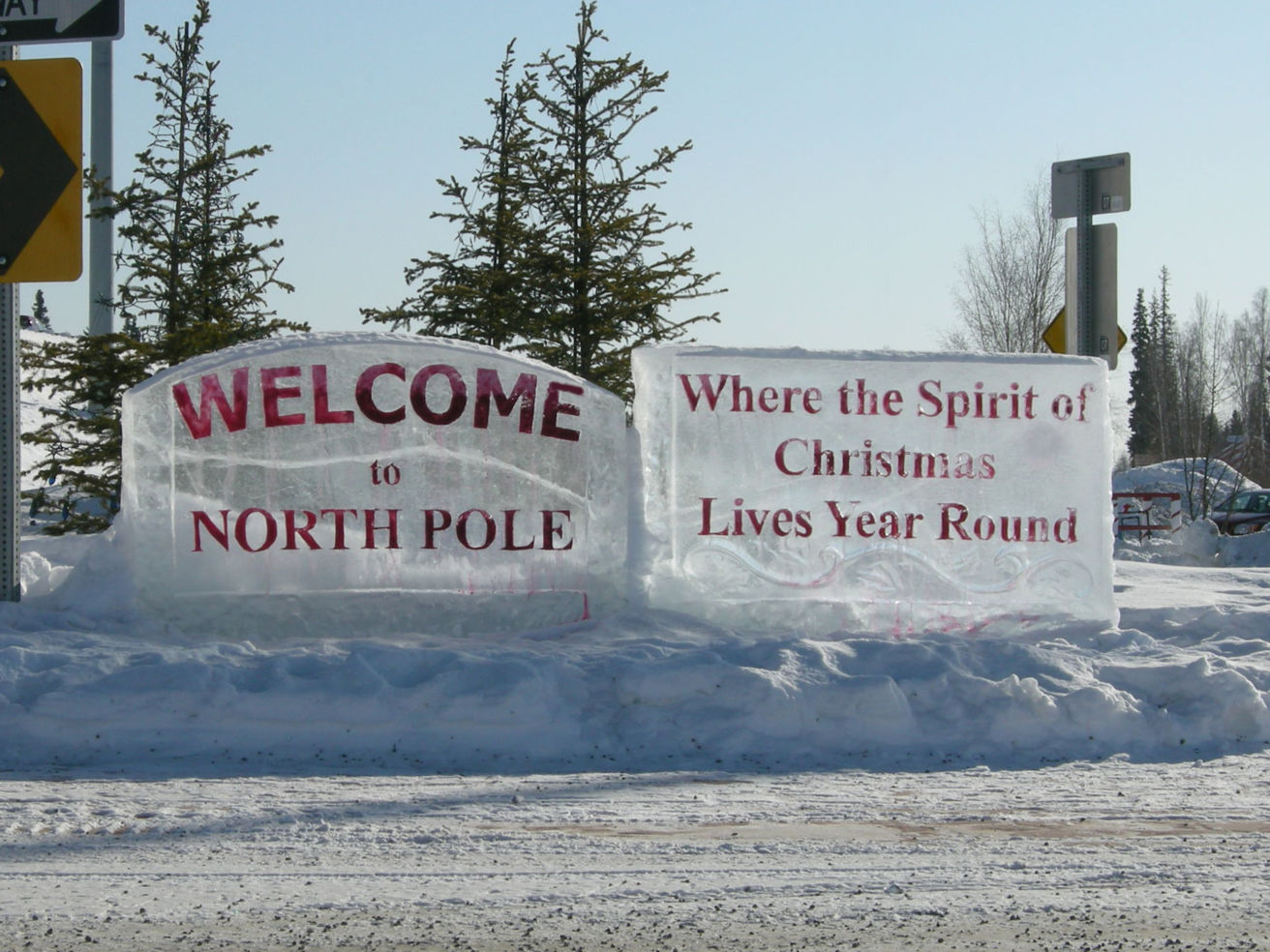 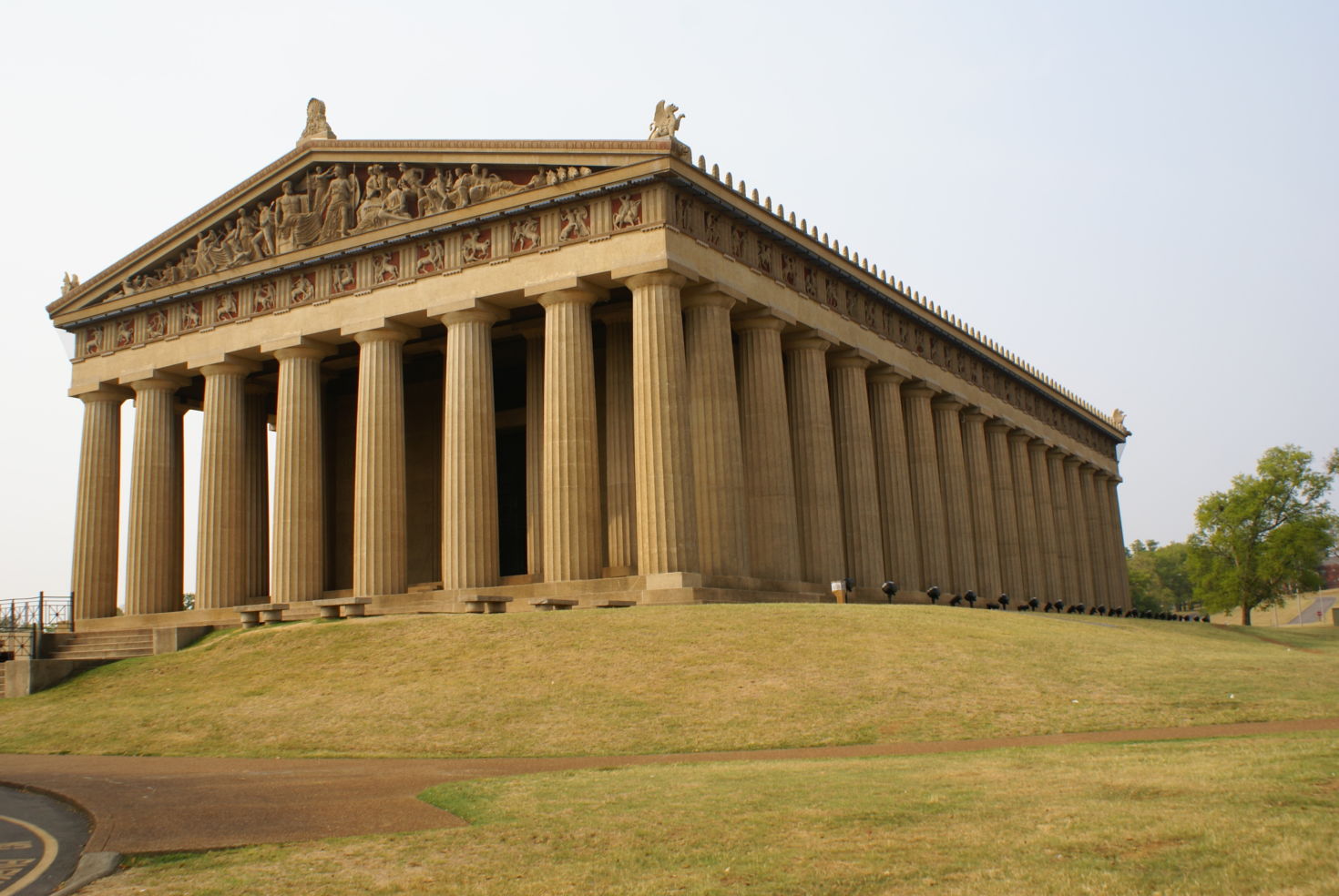 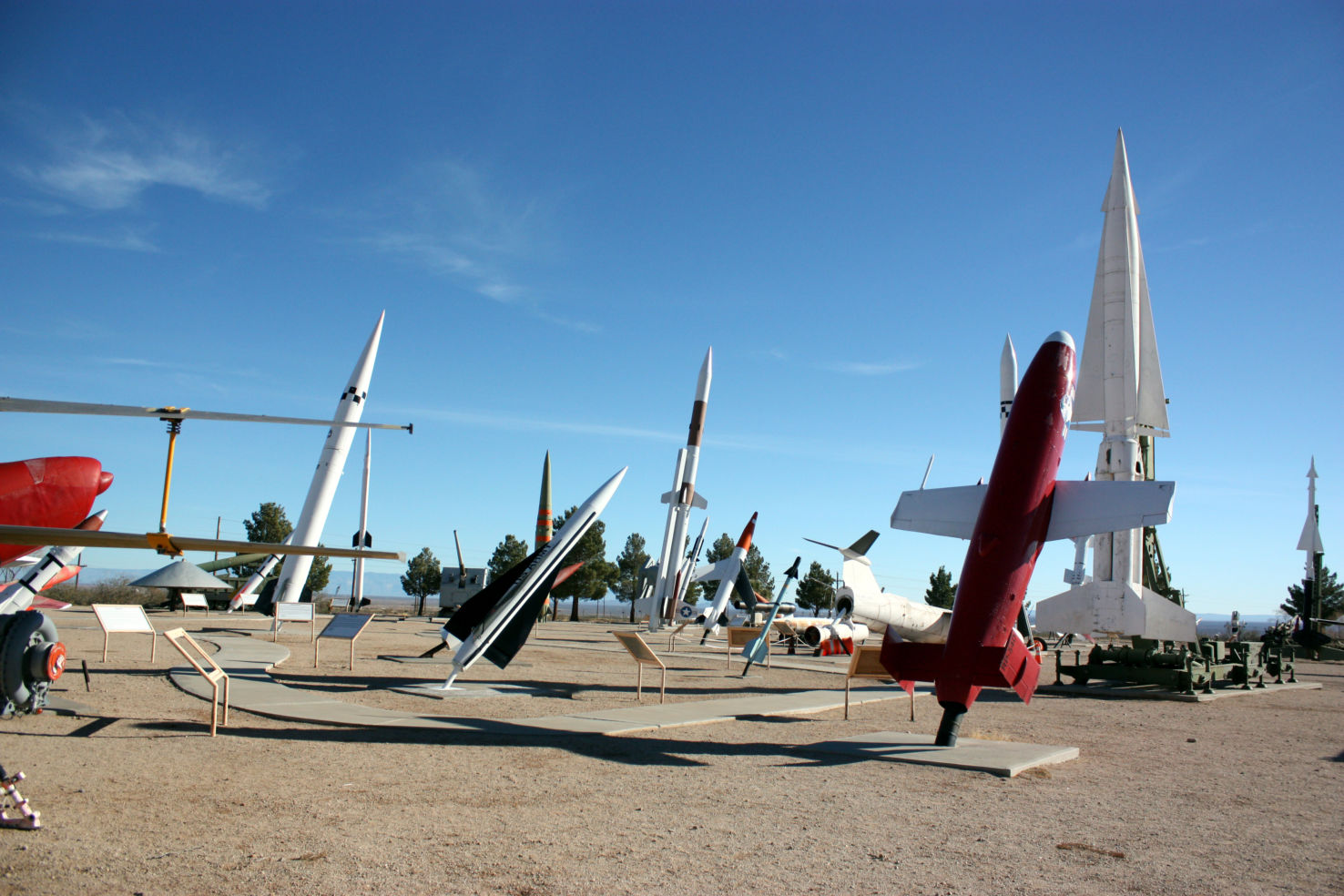 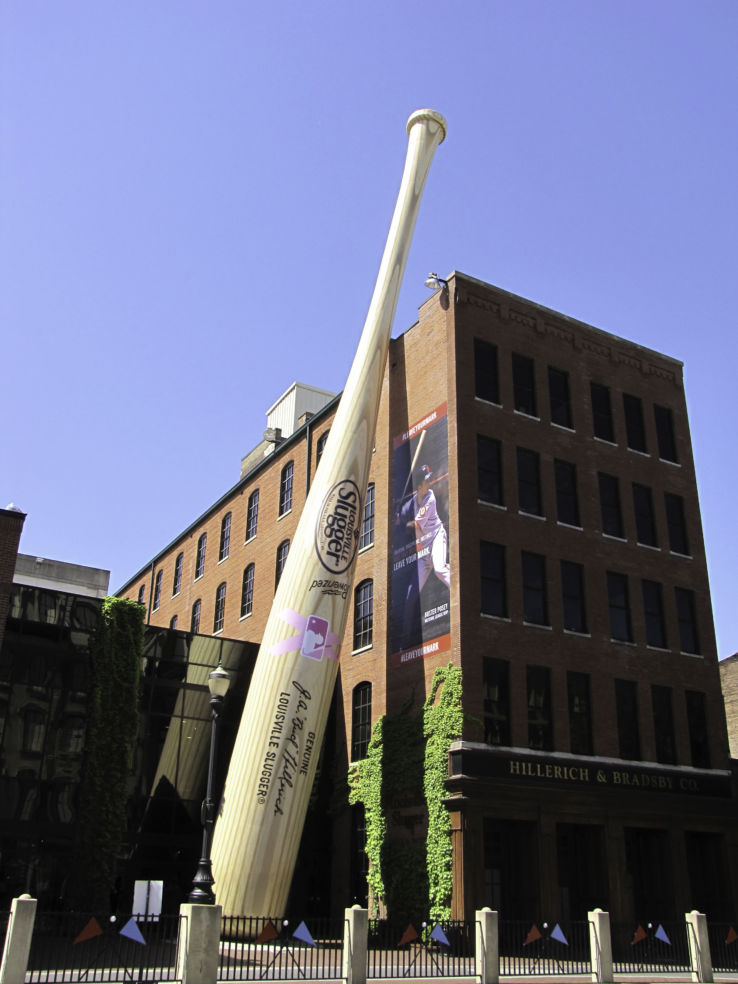 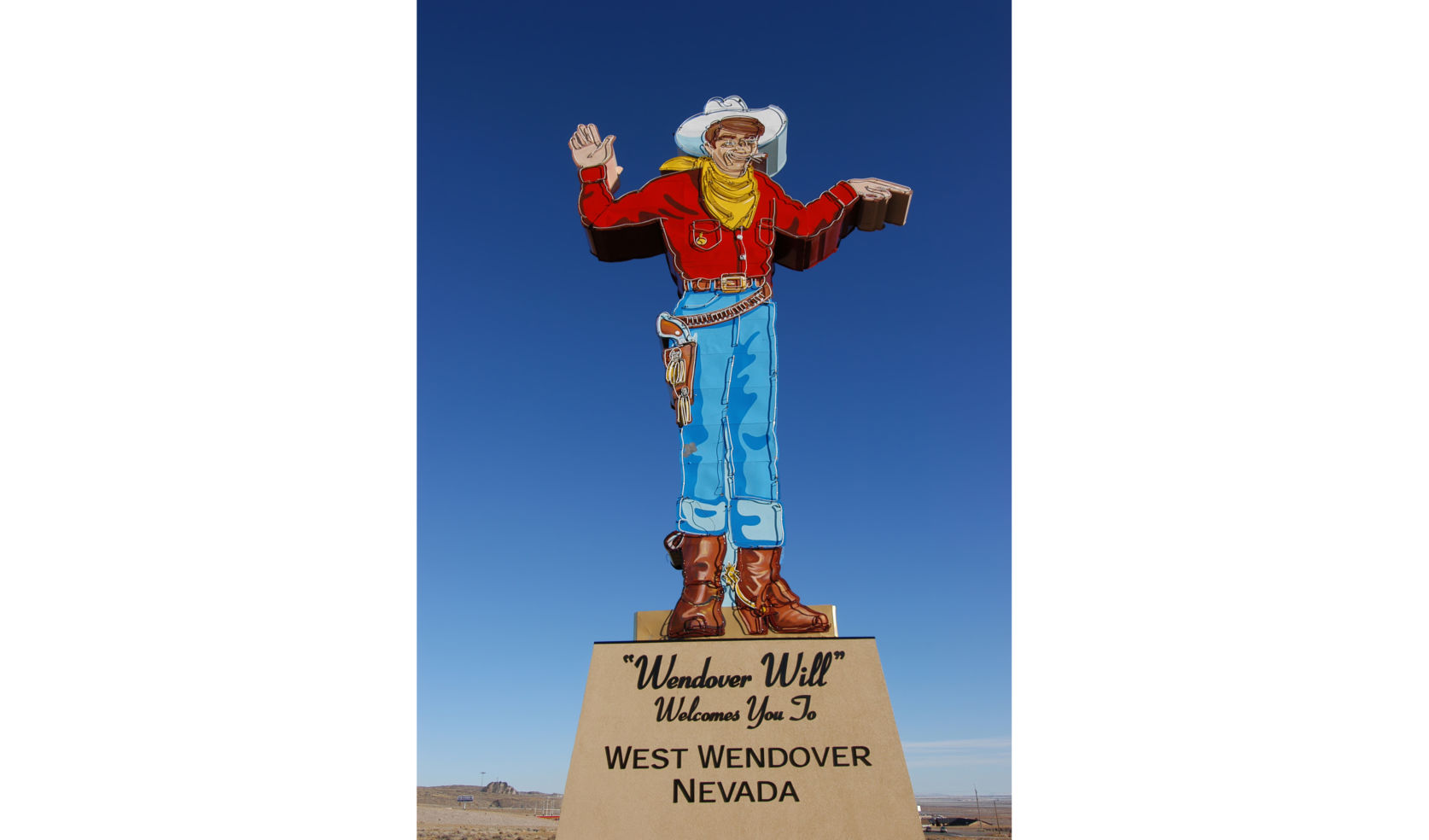 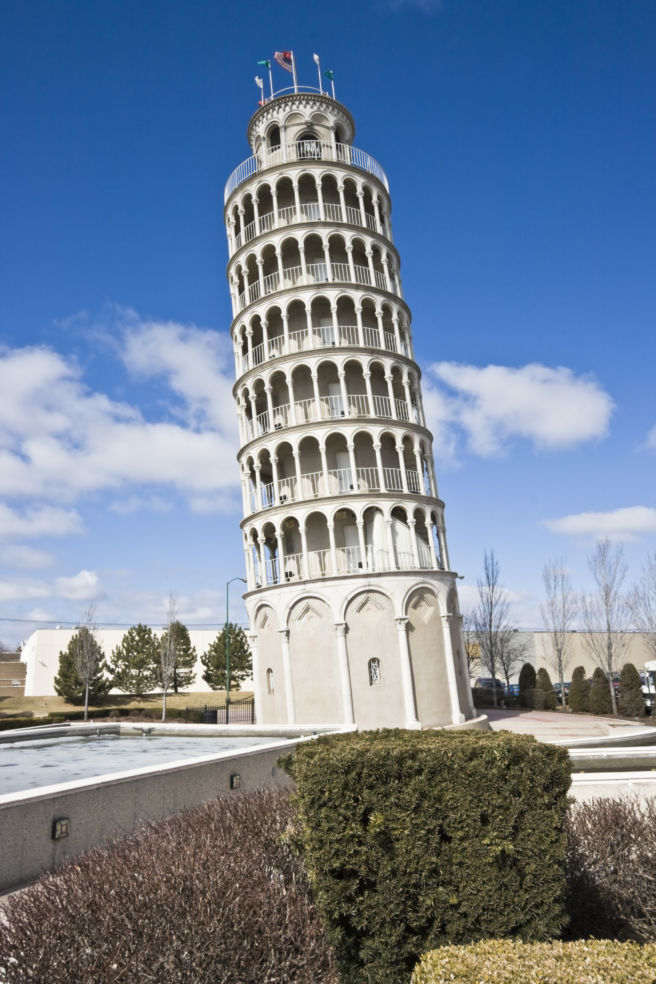 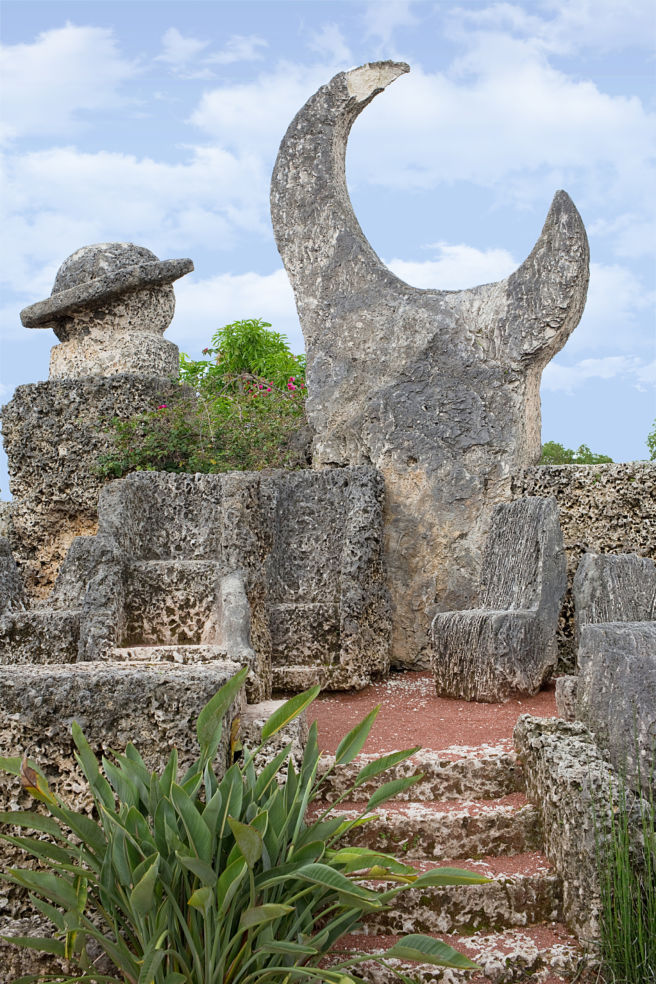 If you're driving along Route 66 just west of Amarillo, Texas, stop by Cadillac Ranch, an art installation featuring 10 Cadillacs sticking out of the ground head-first. Commissioned by Stanley Marsh and created by a group of artists from San Francisco in 1974, the site is a tribute to the car's unique tail fin design between 1949 and 1963.

This giant basket along E. Main Street in Newark, Ohio, is actually the headquarters of the Longaberger Basket Company. According to an article by the Huffington Post, this $30 million replica of the Medium Market Basket houses the offices of 500 employees and is 160 times larger than the real thing.

Don't miss the National Fresh Water Fishing Hall of Fame and Museum in Hayward, Wisconsin, where you can visit get your picture taken inside the mouth of the world's largest fiberglass fish. At more than four stories tall, the giant muskie holds a Shrine to Anglers and offers views of the six-acre sculpture garden from the top.

If you happen to be taking a road trip around Utah's Mighty Five National Parks, stop by Hole N" The Rock, a combination 5,000-square-foot house, souvenir shop, general store, and exotic zoo carved into the side of a rock along Highway 191 as you drive into Moab from Southern Utah.

This 92-mile portion of Nevada's State Route 375 beween Warm Springs and Hiko was named the Extraterrestrial Highway in 1996 because of its proximity to Area 51, a place where conspiracy theorists say the government is hiding alien life. Don't miss the quirky town of Rachel near the middle of the highway, an area full of funky alien-themed attractions.

Four hours east of Rapid City in Mitchell, South Dakota, you'll find Corn Palace, a monument to the state's vast agricultural history. Originally built in 1892 and re-built in 1921, its artsy corn murals are decorated each May with more than 275,000 ears of corn, and made of 13 different naturally colored types of corn. (Courtesy Americanspirit/Dreamstime)

Perhaps one of America's most well-known roadside attractions, Carhenge is Alliance, Nebraska's homage to Stonehenge, created by Jim Reinders in 1987. Mark your calendars: On Aug. 21, 2017, Carhenge will be in the direct path of the Solar Eclipse, sure to be an amazing sight if you happen to be passing through.

One of the most iconic attractions along historic Route 66, The Blue Whale, is located in Catoosa, Oklahoma, twenty minutes east of Tulsa. Thrilling kids and families on and off since 1972, the attraction was refurbished by the Catoosa Chamber of Commerce in 1997 and continues to draw visitors each year.

Don't miss Salvation Mountain in Niland, about 90-minutes from Palm Springs in the desert of Southern California. Made of local adobe clay and donated paint, Salvation Mountain was created by Leonard Knight, and stands as his tribute to God's love for the world, featuring colorful birds, trees, flowers, waterfalls, and other scenes from nature, as well as quotes from the Bible.

Don't pass up the opportunity to spend the night in the iconic Wigwam Motel, located off Route 66 in Holbrook, Arizona. The best part: rooms start at just $52 a night.

The Awakening Sculpture by J. Seward Johnson, Jr. was moved to Washington D.C.'s National Harbor from its original location near Hains Point and the Jefferson Memorial in 2008. The impressive sculpture depicts a giant trying to free himself from the confines of the earth.

Don't miss a photo-op with Paul Bunyan himself. This 20-foot tall statue of the legendary lumberjack was built in 1984, is located in Akeley, Minnesota, and features the kneeling figure holding his famous axe—visitors are given the unique opportunity to pose in his outstretched palm, so don't forget your camera!

This full-size replica of Stonehenge in Natural Bridge, Virginia, is made of styrofoam, and was created by Mark Cline of Enchanted Castle Studios as an April Fool's gag back in 2004. Today, Foamhenge is one of the most popular roadside attractions on the east coast, and according to its creator, is only about five feet off during sunrise on the Summer Solstice.

If you're a fan of Grant Wood's American Gothic, you'll want to stop by the American Gothic House in Eldon, Iowa, the place that inspired the famous painting. Forgot your hay fork? No worries! Volunteers and staff at the Center are eager to provide aprons, overalls, antique glasses, and other props to help you create the perfect souvenir photo.

Lucy the Elephant was originally built in 1882 as a means of attracting tourism to the area south of Atlantic City, now known as Margate City, in New Jersey. At six stories high, the landmark has served as both a real estate office and a tavern. Nowadays, visitors can tour the inside for $8.

The first of four Antler Arches in Jackson, Wyoming's Town Square was created in 1953 (the others followed over the course of the next ten years), using roughly 2,000 pounds of elk antlers collected from the nearby National Elk Refuge. No elk were harmed in the making of this landmark, as the animals naturally shed their antlers each year.

If you happen to be road-tripping around the Hawaiian Island of Oahu, stop by the Dole Plantation (pictured here), which currently holds the Guinness World Record for World's Largest Maze. Adults can take on the pineapple-themed maze for $6; children ages 4-12 pay $4; military members and Hawaii residents get in for $5.

Aptly named South of the Border, located along I-95 just south of the border between North Carolina and South Carolina, bills itself as a highway oasis—the property is home to two gas stations, an inn, several shops and restaurants, an amusement park, Reptile Lagoon, and a giant 200-foot tall Sombrero Tower.

If you're looking for a town with holiday spirit all year long, visit North Pole, Alaska, a twenty-minute drive southeast of Fairbanks, to see the "official" home of Santa Claus. Get your photo taken with Santa and his reindeer, and don't forget to have your holiday cards postmarked from the North Pole while you're there!

Can't make it all the way to Greece to see the actual Parthenon? Try visiting the full-scale replica in Nashville's Centennial Park. Not only does it look like the real thing, Nashville's Parthenon also serves as an art gallery—adults can visit for $7, while seniors over age 62 and children ages 4-17 get in for $5.

Add a photo of the 120-foot tall Big Bat—modeled after Babe Ruth's signature 34-inch bat—outside the Louisville Slugger Museum in Kentucky, to your roadside attractions repertoire.

Pay a visit to the iconic Wendover Will sign, originally built in 1952 as a way to identify the Stateline Casino in West Wendover, Nevada.

This half-sized replica of the Leaning Tower of Pisa is actually a water tower in disguise. The Leaning Tower of Niles, located about 25 minutes from Downtown Chicago, was built in 1934 and is today, unfortunately, not in the best shape, although restoration is scheduled for 2014 and 2015.

Just 10 minutes from Homestead, Florida, in the southern part of Miami, you'll find Coral Castle, an impressive structure built by Edward Leedskalnin from 1923 to 1951 that was listed on the National Register of Historic Places in 1984. Admission is $15 for adults (ages 13-64), $12 for seniors over age 65, and $7 for children ages 7-12. Children under the age of 7 get in free.

From the world's biggest pineapple maze to a castle made of coral, you won't want to miss these oddball only-in-Amerca spots the next time you are looking for road trip ideas or ready to hit the road. Here are some of our favorites!