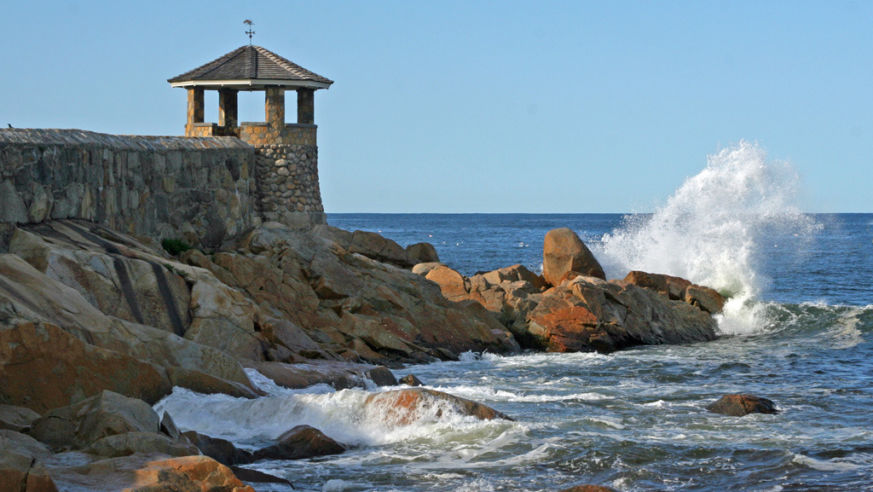 Beautiful Rockport, MA, is one of the stops on these exceptional lesser-known American road trips!

This article was written by Jimmy Im and originally appeared on Yahoo Travel.

According to AAA, one in four Americans take a road trip every year, and with good reason. It's cost effective (especially with falling gas prices), enriching, and utterly nostalgic, and just plain fun. While plenty of iconic routes snake across our nation (like the Pacific Coast Highway and Route 66) we rounded up under-the-radar routes that should definitely be on your bucket list. They're just that amazing. So get your favorite driving playlists ready and check out these hidden-gem road-tripping adventures.

1. The Route: Boston to Rockport, Massachusetts

The Vibe: The Massachusetts coast is alluring, dotted with historic fishing towns.

Along the Way: Start by taking in Boston's best sights, from shopping on Newbury Street, to a Red Sox game in Fenway Park, to The Freedom Trail, to Faneuil Hall Market Place, to eating in the North End. Then head to Salem on MA-1A North. Salem is steeped with history: It's home to the infamous Salem witch hunts but it's also quaint and beautiful. Be sure to check out the Peabody Essex Museum, The House of the Seven Gables, and Old Burying Point Cemetery. Just outside of Salem, you'll also want to visit Marblehead, a charming, coastal village with roads and buildings dating back to the 18th century and a harbor filled with yachts. Wander the streets and visit Old Burial Hill, Castle Rock Park, and the Marblehead Lighthouse to stretch your legs. Drive north on I-127 to Gloucester, a fishing town home of the book and movie The Perfect Storm about the doomed Andrea Gale (and, incidentally, where the concept of frozen food was born; it was developed there in America's oldest working fishing port!). Good Harbor Beach and the Fisherman's Memorial are worth seeing, and you can also go whale-watching. End up in Rockport, a boho art colony where artists are inspired by, Motif #1, a 150-year-old red fishing shack on Bradley Wharf. Or check out Halibut Point State Park.

The Vibe: Think of it as an alternative to Maui's Road to Hana ride, except on this one is on the Big Island, known for its exciting outdoor adventures. Perfect for nature lovers.

Along the way: Start at Kohala Coast, home to the island's best resorts like Four Seasons Hualalai and The Fairmont Orchid. First, take a dip at Maniniowali Beach, known to locals as Kua Bay, one of the most pristine beaches on the island. People also love to bodyboard there, but be careful and check to see that the waves are small enough to be manageable. Next head south on Highway 19, taking in the natural environments, from the coast to rain forests (there are actually 11 of the world's 13 climate zones on this one island). At Highway 11, after mile marker 108, stop at Coffee Shack, a beatnik cafe on the edge of a cliff, sporting breathtaking views of the coast. Have a strong cup of locally produced Kona coffee, then continue on to the 180-acre Puuhonua O Honaunau National Park, home to a well-preserved, ancient Hawaiian royal residence. It's a beautiful drive along old lava fields and tropical forestry for about 40 miles. Stop in the town of Naalehu for Punalu'u Bake Shop, the southernmost bakery in the United States, famous for their doughnuts. Hop back in to the car until you reach Hawaii Volcanoes National Park, which made headlines last year with several eruptions. There are lava caves to explore, and visit the Kilauea Visitor Center and learn how to safely view the active lava flows in the park.

The Vibe: If you've conquered Route 66 or just want something a little different, try the Reno Loop, with tons of activities for sporty and adventurous types.

Along the way: Kick off the drive with rock climbing at Whitney Peak Hotel, a new property sporting the largest artificial rock-climbing wall in the world. You can't miss it - the wall is on the side of the hotel. Next, take Nevada State Route 431 to Incline Village on the shore of Lake Tahoe. Stop and get in a hike (or go skiing in the winter), play some tennis, or go sailing. For those feeling more frisky, there's an unofficial nude beach just south of the area. Jump back in the car and take Nevada State Route 28 to Stateline, where Heavenly Mountain Resort's activity center at the top of the gondola includes a zipline and rope courses. From there, head to the town of Genoa from State Route 207 to Route 206. The tiny town is home to Genoa Bar, one of the oldest in the state, where an iron safe is filled with a collection of decades-old bras. Continuing to U.S. 395 through Carson City until U.S. 50, take State Route 341 (which turns into 342) to Virginia City. Mark Twain once lived here as a reporter for the Territorial Enterprise newspaper. The 19th-century mining town still retains wooden boardwalks and Victorian-era buildings - hop on a rail tour to get the full retro effect. Virginia City is also chockfull of ghosts, so check out haunted sites like The Washoe Club Haunted Museum, Piper's Opera House, or the Silver Queen Hotel.

The Vibe: The famed Pacific Coast Highway is the most visited route for road trippers (from families to honeymooners), but Northern California touts an amazing drive, too. Just sober up before you get back in the car after all the wine tasting!

Along the way: Hit a few wine tastings and tours in Napa Valley, like Beaulieu Vineyard, one of the oldest in the area; family-owned Buehler Vineyards for great value; or Cade Estate for especially awe-inspiring views. From Napa, take the 101 to 128. During the drive you'll stop in several towns with breathtaking landscapes, like Sonoma and Healdsburg. In Sonoma, of course there are more wine tastings, and Francis Ford Coppola's winery is equipped with an outdoor pool and exciting gift shop with film memorabilia. You can also check out the Boyes Hot Springs at the Fairmont Sonoma Mission Inn & Spa. In hipster-laden Healdsburg, you can stop to soak up some of the wine with fresh, crafted cupcakes at Moustache Baked Goods, which uses simple, organic ingredients for their sweet treats. But make sure you're sober for the drive, because this part of the trips is all about embracing the beauty of the region, and take the windy, two-street roads slow and easy. Through small towns, tree-lined streets, and plenty of open sky, you'll end up on Highway 1 along the rugged coast, until you reach the rustic town of Mendocino. It's embellished with Cyprus forests and scenic cliff sides, many that overlook blowholes and sea caves. Check into Elk Cove Inn, a hidden gem that's just as rustic as the region. There are only 16 rooms, all of which tout breathtaking views of the coast.

Related:Making the Most of a Wine-Soaked Weekend in Sonoma

5. The Route: From Austin to Marfa, Texas

The Vibe: While we love the classic Texas BBQ and Hill Country Hideaways, a new emerging route is a hipster favorite: the road to Marfa.

Along the Way: From Austin, take U.S. 290 to I-10. This stretch is more of a meditative drive; there's not much along the way. But about an hour and a half from Austin, the small town of Fredericksburg woos tourists for its quaint, small-town feel with family-run shops on Main Street. It's also known for Enchanted Rock, a former spiritual holy ground for Native Americans favored by hikers. After six hours, travelers will arrive at Marfa, a quirky, trippy town run by an artist colony. It's wildly famous for it's stand-alone Prada store that's more of an art concept. Famous movies like Giant in 1956 were filmed in Marfa, and retro legends Liz Taylor, James Dean, and Rock Hudson all stayed at the famed El Paisano Hotel. Keep your eyes out for mysterious lights in the town, floating glowing balls of white, yellow, and red light, spotted since 1883 and, to this day, remain a mystery. There's even a viewing area located nine miles east of town on Highway 90.

6. The Route: Denver to Telluride, Colorado

The Vibe: There's nothing like slope hopping out west, but spring/summer is the best time to see the small towns of Southwest Colorado; they're culturists' dream destinations.

Along the way: The drive from Denver to Ouray on I-70 West is through some breathtaking landscape in the mountains and national forests. Ouray is a famous ghost town that's quirky and well preserved - it looks like a film set for a Western. If you're driving during cold weather, the claim-to-fame in Ouray is the ice climbing at Ouray Ice Park. As the largest ice park in the world with 200 climbing routes, it's one of the best places in the U.S. for this recreation. Take US-550 South to Durango, a charming town that's home to cute cafes and old-school saloons. You can also take in the great views with an old-timey train ride from Durango & Silverton Narrow Gauge Railroad Museum or at San Jaun National Forest. From here, via CO-145 North, it's only two hours to Telluride, which is home to Butch Cassidy's first bank robbery. Travelers can visit the original safe in what's now a sunglass store. Nearby highlights also include Ridgway, where True Grit was filmed; Sawpit, the smallest town in Colorado with a gas station and one street lamp (Oprah Winfrey and Tom Cruise own homes here), and the protrusion of Wilson Peak, the iconic mountain on every Coors Light beer can.

Along the way: Start at Zion National Park, Utah's oldest national park with 69 types of wild animals living here (including mountain lions). A two-hour scenic drive takes road trippers to Lake Powell, a manmade reservoir surrounded by sandstone walls (water sports, like paddleboard yoga, are offered here). Lake Powell is a stone's throw from Amangiri, one of the most luxurious resorts in the U.S. Have lunch on the outdoor terrace and you may spot a celebrity or two. Go onward to the beautiful Highway 12 (Utah's "All American Road") to Grand Staircase Escalante National Monument, home to million-year-old canyons for canyoneering, then Bryce Canyon National Park where you can pitch a tent for some major overnight stargazing. Nearby Boulder is known for Hell's Backbone Grill's pumpkin enchiladas and other farm fresh produce in the middle of scenic nowhere. From here, you can take on a three-hour drive to Canyonlands National Park to experience more surreal, natural scenery.