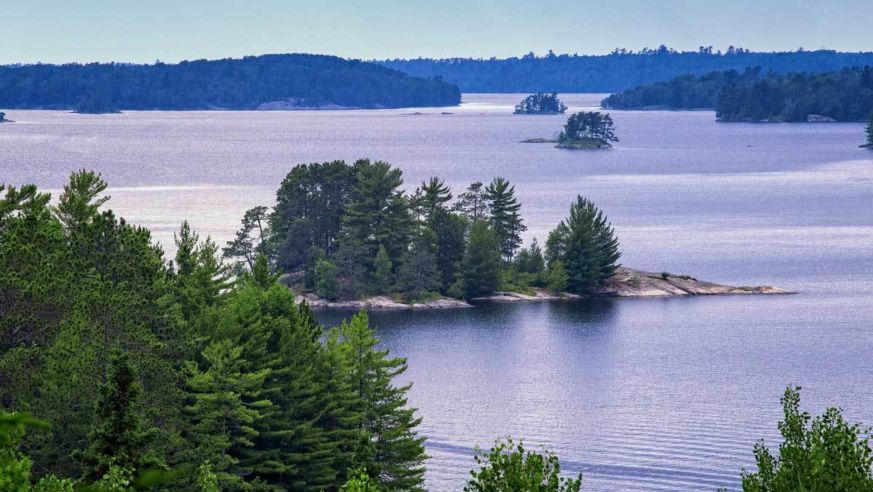 These cheap private islands across the USA can be rented for less than the cost of a hotel (and make for a way better vacation story).

Hotels? Too full of other guests. Vacation rentals? Too close to other people. A private island? Just right.

A classic A-frame house, hammock, rope swing, and canoe all await you on this private island on Maine’s Annabessacook Lake – for as low as $150 per night. The price includes a private ferry ride to and from the island for all guests and their luggage. Guests can spend the day walking the island’s 14 acres of trails, swimming, and kayaking, and then cook dinner in the fully-equipped kitchen or on a campfire under the stars.

This cheap private island on Juggler Lake is a budget hiker’s paradise, with 18 acres of lush forest to explore, as well as wild strawberries, ginger, and morels to forage for. Only about an hour and a half from Fargo, the island offers a relaxing nature-focused getaway for anyone looking for some peace and quiet. The A-frame cabin sleeps up to 10 people in three bedrooms and has all the amenities – including three patios, floating diving dock, and a fully-equipped kitchen. A boat is available for rent for just $200, and the private island itself costs only $375 per night.

When you rent the Private Islands of Old House Cay, you get not just one private island but three – all for the low price of $536 a night. This lowcountry group of islands is just 10 minutes from Hilton Head, but feels like a whole world away. The main island included with the rental comes with an off-the-grid, modern home that’s equipped with all the creature comforts you’ll need for a relaxing getaway. 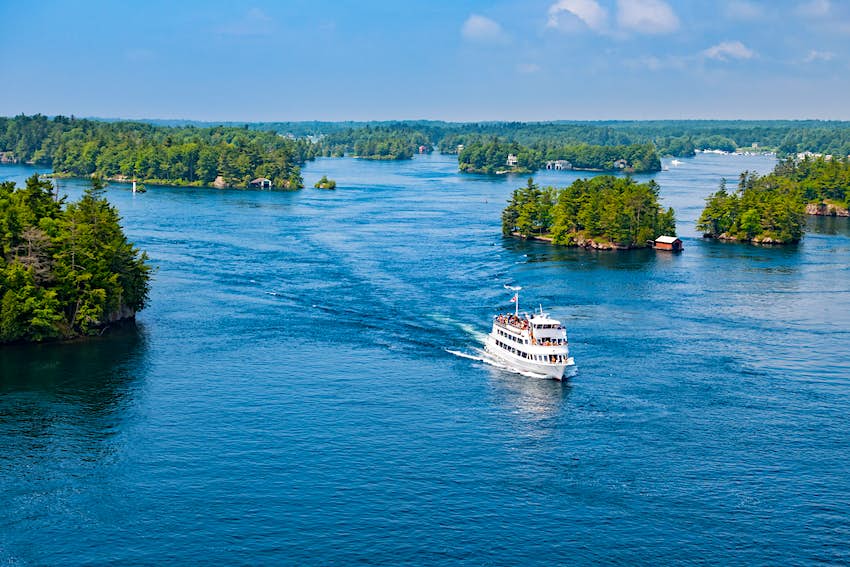 For a cheap private island getaway in the Thousand Islands, rent Quadkin Island. The island’s spacious five-bedroom house can be yours (along with up to 11 of your friends) for as low as $471 per night – spectacular sunsets, swimming, and boating included.

Named Dogatraz Island, this one-acre getaway is perfect for pets and their owners. Set on Lake Iroquois, this Vermont escape offers swimming, fishing, bird-watching, and incredible sunsets. The two-bedroom house has all the amenities (including potable water, which isn’t always a guarantee on an island). A cozy outdoor seating area, fire pit, and long dock complete this outdoorsy rental. This cheap private island can host four people (and any number of dogs) for a mere $379 per night – dog treats not included, but kayaks and canoes are.

For as little as $106 per night, Republic Island on Michigan’s Michigamme River can be rented to groups of four or less. The private island hosts a three-bedroom cedar log cabin that was built in the 1800s, and is surrounded by two-acres of densely wooded land. A boat is included with the rental to close the 300ft gap to the shoreline.

This log cabin nestled on a private island in Maine can be rented for just $150 a night by groups of six or less. The gorgeously designed house features a fieldstone fireplace, cathedral ceiling, and a screened-in porch. The island is a short row away from mainland Damariscotta, and there are three kayaks and life jackets available for guests to use to explore the surrounding waters. 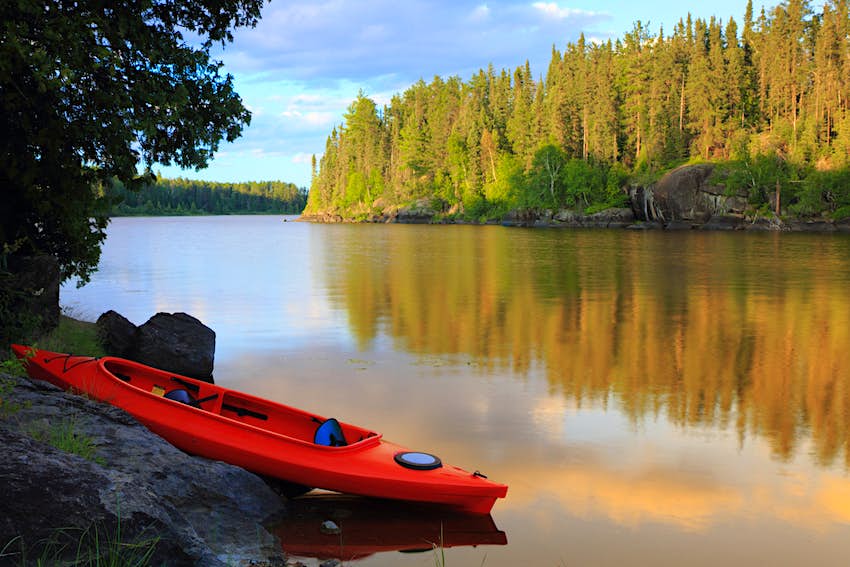 Lake of the Woods, Minnesota

Blackbird Island, on Minnesota’s Lake of the Woods, is just one mile from Canadian waters and provides the perfect base for exploring the 65,000 miles of pristine shoreline nearby. The private island’s charming cabin sleeps up to eight, and rental prices start at just $143 per night.

From the shores of Poulsbo, Washington, guests are ferried over to their private paradise on Island Lake via an electric raft (a service that’s included in the $304/night rate). The island’s main house sleeps up to eight people, and for stays of four nights or longer, a second cabin will be made available for the group’s use so they can spread out even more.

The large cabin on this private island comfortably sleeps 11 people, so a big group might pay just $31 per person per night – a true bargain considering the beautiful sandy beaches, rowboat, beach chairs, and picnic table that come along with the rental. The island is kept natural and wild, so there’s no running water or electricity, but there are solar lights, a wood-burning stove, firepit, and gas grill.

Forget camping – a private island in Douglas State Forest can be rented for almost the same price as a campground spot. Dodd Island sleeps eight people, bringing the cost down to $34 per person per night. The 7-acre cheap private island is perched on Whitins Reservoir, a warm and shallow lake with visibility down to 40ft, making it a paradise for snorkelers and divers. 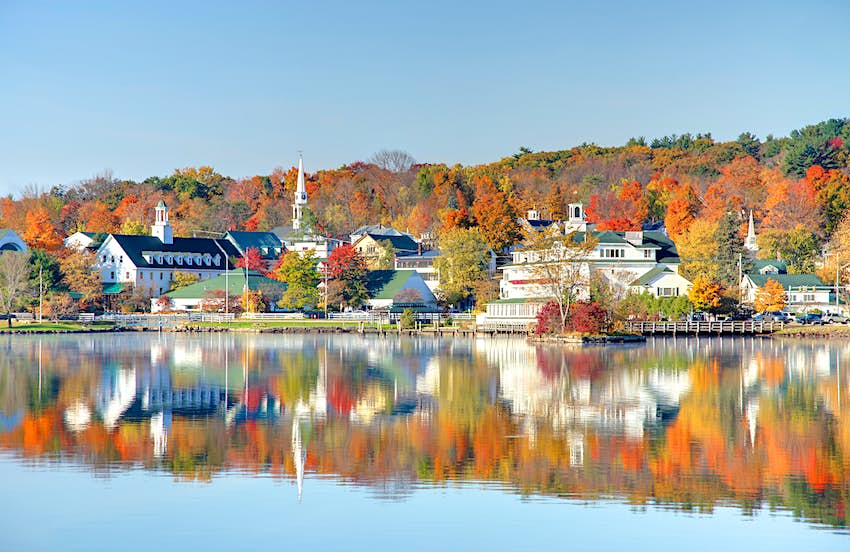 Foley Island is a private island surrounded by the beautiful waters of Lake Winnipesaukee. A secluded swimming area and over-water sundeck make this a true island paradise, and it can all be rented by up to 12 people for just $386 per night.

Sands Island rents for $325 per night and gives groups of up to four 32-acres of undeveloped land to explore. The private island’s two-bedroom cottage is the only building on the entire island and was built from locally milled pine. It uses solar power to seamlessly blend into the surrounding environment.

A 1500-sq-ft house with wrap-around screened porch, hot tub, and wood-burning fireplace can be yours for as little as $475 per night on Eagle Island, which includes access to the entire private island. Boat rentals, fishing tours, and eco-adventures are also available to book at an extra cost.

This famous private island in Swansboro, North Carolina, has appeared on the Island Hunters television show. If you missed the episode, the island has a small cabin that sleeps up to four people. Surrounded by white sandy beaches, the island is great for relaxing, but not too far from civilization (you can kayak right up to nearby bars and restaurants with dock entry). Rates for this ultra-cheap private island start at $101 per night.