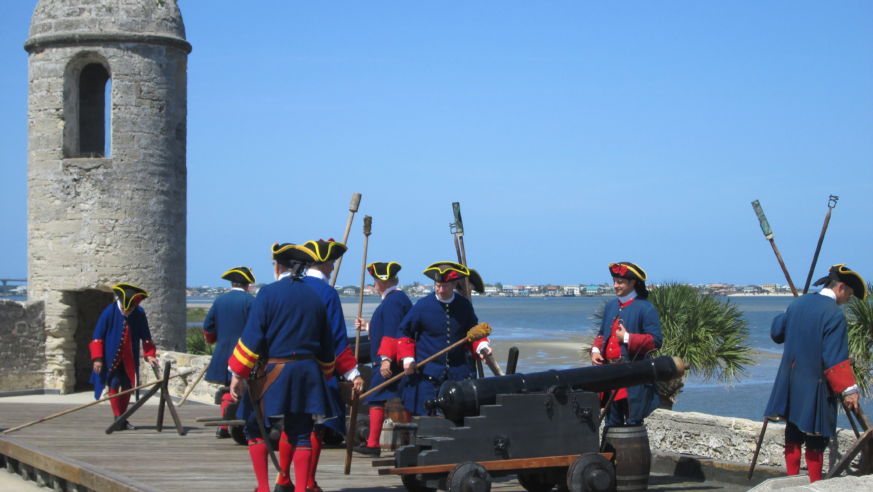 Whether you're looking for a golf getaway or a Florida family vacation, we've rounded up six affordable adventures in Ponte Vedra and St. Augustine that should be on your radar.

There's more to Florida than theme parks, beaches, and cities where you can party til dawn (although those are pretty great, too!) Whether you're looking for a quick golf getaway or your next great family vacation, here are six of our favorite family-friendly activities and affordable adventures in Ponte Vedra and St. Augustine—all within an hour's drive of Jacksonville on Florida's northeast coast. Many area hotel options start at well under $100 a night, making a trip to this area super-affordable.

Golf enthusiasts will love tracing the roots of the game from its early days in Scotland, testing out old versions of golf clubs, and learning where certain traditions like sand traps and caddies hail from (both stories will surprise you, I promise). The World Golf Hall of Fame also features a replica of the Swilcan Burn Bridge from the Old Course at St. Andrews, displays of the Hall of Fame Members Locker Room with more than 2,000 personal items from all your favorite players, and a large collection of memorabilia dedicated to golf lover Bob Hope. The World Golf Hall of Fame is part of the World Golf Village, home to the PGA Tour Golf Academy, two major golf courses, and a number of shops and restaurants including Murray Bros. Caddyshack, owned by actor Bill Murray and his five brothers. Want to stay close to all the action? The Renaissance World Golf Village Resort offers rooms from under $200 a night—check the website for specials for Florida Villages residents, military members, firefighters, and law enforcement officers where rates start at $109 a night, as well as Stay & Play packages for from $259 a night for two golfers.

If watching The Players Championship each May has you itching to hit the greens, you can still visit the course in Ponte Vedra and its massive clubhouse year-round, or start planning for this year's visit to this surprisingly affordable tournament held in May 6-11 in 2014. For the price of a TPC Sawgrass adult Grounds ticket (options from $66 per person per day), you'll be able to see your favorite players—like Tiger Woods, Phil Mickelson, or Matt Kuchar—up close as they take on the 17th hole island green, one of the most famous holes in golf. Families can save money with free admission for ages 18 and under (with a paying adult), while active-duty, reserve, retired military members, and their dependents get free admission with a valid military ID. You're also allowed to bring your own food to the tournament as long as it's packed in a one gallon clear plastic bag (food items must also be wrapped in clear wrap), and bring your water bottle along to refill during the day. A variety of food trucks ranging from Corner Taco to The Swedish Bistro will also be on site, and those who plan to carpool with four or more people in the car will be rewarded with free parking this year. Looking to indulge in a little VIP experience? You can score access to The Blue Room VIP Lounge for under $150 per person per day including entry to the tournament, exclusive access to music and entertainment, unlimited food from the local restaurants, and all-inclusive beer, wine, water, and soda while you watch.

As if an entire zoological parkfull of alligators, crocodiles, caimans, pythons, lemurs, and exotic birds wasn't cool enough, just wait til you try zip lining over them. Crocodile Crossingat the St. Augustine Alligator Farm & Zoological Park gives you two options—the 45-minute short course or the 90-minute long course—with each offering an extensive aerial obstacle course and several opportunities to zip line over the wildlife enclosures. At 20 to 60 feet up, you're out of reach of the many reptiles you're zooming over but still able to get a good look at the impressive creatures as you take on the ropes course. Make sure you're wearing closed toe shoes (with laces) and weigh less than 250 pounds, and you're good to go! Definitely give this one a try if you're in the neighborhood—the bragging rights alone are worth the cost of admission.

Get to know Old St. Augustine with a trip to the Castillo de San Marcos National Monument, a 20.5-acre fortress built in 1672 that has protected the city's people during various battles against the Spanish, French, British, and even attacks by pirates throughout history. Nowadays visitors can explore the fort and view colonial era weapon and cannon firing demonstrations on Saturdays at 10:30 a.m., 11:30 a.m., 1:30 p.m., 2:30 p.m., and 3:30 p.m. The best part: adults pay $7 while children under age 15 get in free, and your ticket is valid for up to seven consecutive days. For an in-depth look at what everyday life was like in 16th to 18th century St. Augustine, check out the Colonial Quarter, a living history museum featuring traditional musket demonstrations, a working blacksmith shop, and the chance to climb a 17th century watchtower for panoramic views of the city.

Formerly The Pirate Soul Museum in Key West, the entire collection was moved to St. Augustine and reopened in December of 2010 as Pat Croce's St. Augustine Pirate and Treasure Museum. Home to one of the largest collections of authentic pirate artifacts in the world, the museum features one of only two original Jolly Roger flags in existence, Captain Thomas Tew's treasure chest, an official journal of Captain Kidd's final voyage, and one of the world's oldest wanted posters from the 1696 search for Captain Henry Every.

There seem to be an abundance of ghost tours available in the nation's oldest city. I went on the Ghosts & Gravestones St. Augustine Frightseeing Tour, a late night trolley ride around town with stops at the St. Augustine Lighthouse Grounds—you'll hear the heartbreaking story of what happened to the three little girls who can still be seen and heard playing on the playground swings more than one hundred years later—and get to explore the Old Jail at night on a tour led by an actor in traditional prison garb who tells stories of the jail's former inhabitants. While it is a fun chance to hear some creepy legends and ghost stories, the tour may not be appropriate for children under age 13.