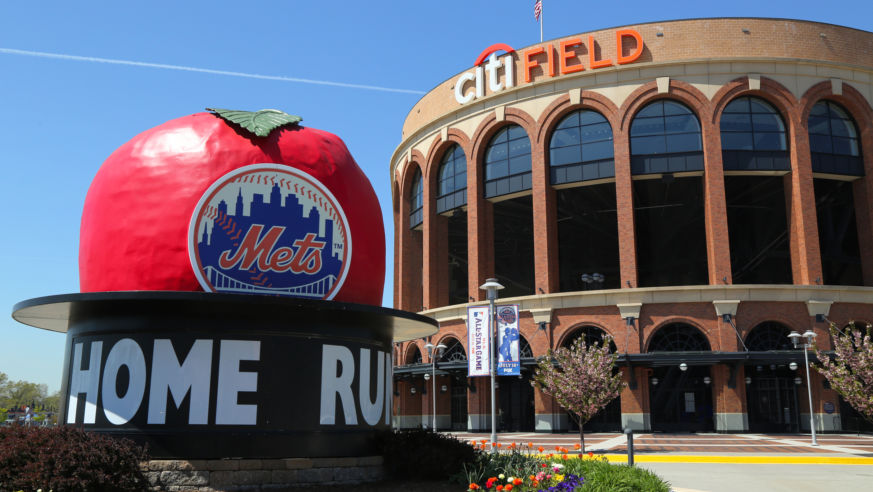 Citi Field, home of the New York Mets, may take the pennant for deliciousness.

From hot dogs to hoagies, BBQ to garlic fries, baseball food has gone way upscale. Here, the finest menu options out there.

Close your eyes and imagine yourself at a baseball game on a perfect summer day. The crack of the bat hitting the ball. The roar of the crowd. Cold beer in one hand. And in the other hand… a 24-inch-long Kobe beef hot dog.

Yup. Ballpark food has come a long way since the “peanuts and Cracker Jack” name-checked in the song “Take Me Out to the Ballgame.” Back then, Humphrey Bogart is said to have remarked, “A hot dog at the ballgame is better than steak at the Ritz.” These days, it’s no longer an either-or proposition.

That 24-inch Kobe beef hot dog may be the single most jaw-dropping leap in ballpark food for 2017. It was developed by Chef Gregory Adams, a veteran NYC-area chef and alum of the prestigious Johnson & Wales culinary school in Providence. “My kids and I were watching Shark Tank,” Adams recalls, referring to the popular reality show in which contestants attempt to bring new inventions to market, “and they said ‘Dad, you’re the greatest chef in the world - you should invent a new food!’” That new food, which came to Adams in a dream, is The Big Daaawg, a 24-inch dog making its way to ballparks via Adams’s OMD Inc. (Oh My Daaawg, omdkobebeef.com) brand and ballpark food suppliers such as Aramark Foods and Levy Restaurant Group. The Big Dawg pushes the old-fashioned idea of a hot dog at a ballgame to exquisite new culinary heights: Immense hot dog made from grass-fed, humanely raised and harvested beef, big bun, and incredible toppings including pulled pork, bacon and onion jam, hot caramel, and even ground-up Cracker Jacks. You can ask for the Big Daaawg at Mercedes-Benz Stadium, home of the Atlanta Falcons, and keep an eye out for the unmistakable Big Daaawg logo as the uber-frank makes its way to other parks.

The Mets take the pennant for unparalleled food options, including chicken sandwiches from David Chang’s Fuku and burgers, fries, and dogs from Danny Meyer’s Shake Shack. Basically, if you can’t find food you like at Citi Field, you’re probably just not hungry.

The crab cakes at Camden Yards are made with jumbo crab meat, and local favorite Old Bay seasoning is available, of course. Orioles fans will know that if you’re still hungry, just follow the aromatic smoke rising into the air from Boog’s BBQ.

If you've managed to visit Boston and not overdosed on chowdah by the time you take your seat for a Red Sox game, you can obtain an exceptionally rich, steaming bowl of the iconic New England soup right at the ballgame. This year, Fenway is premiering “meatball cones” (who knew we were waiting for someone to combine the joy of a meatball hero with the convenience of an ice cream cone?) and lobster poutine (steak fries smothered in lobster meat and melted cheese).

READ: "Chinese Food in America Gets a Thrilling Makeover"

The Nationals get high marks for serving craft beer via Base Line Brews and the tasty concoctions at Ben’s Chili Bowl.

Fruit Loops-covered hot dogs at an Indians game. Any questions?

Pirates fans can’t get enough of Primanti Bros. Cheesesteak, and many recommend loading up around the corner with Potato Patch Fries.

The Kansas City Royals' fans may be blessed with the finest BBQ in baseball, and the KC Ribeye sandwich piles onions and mushrooms on top of steak and the barbecue sauce for which the city is renowned.

The San Francisco Giants play in a decidedly foodie town, so it's no surprise that the eats at their ballpark are staggering. Gilroy Garlic Fries have captured the hearts and palates of Bay Area fans and visitors.

While Phillies fans may be enjoying delicious new options this year, including Primo Hoagies, the Mac Shack, and Bull’s BBQ, some are still mourning the loss of the immense Schmitter sandwich, named for Hall of Fame third baseman Mike Schmidt.

The Dodger Burger is a beef patty with a sliced Dodger Dog on top (yes, a hot dog on top of a hamburger - don’t judge), beer-battered jalapeno peppers, caramelized onions, and BBQ sauce.

The Yankees went upscale in their menu options when they moved their new stadium in 2009, including the staggeringly tasty Lobel's Prime Beef Sandwich. But for this Bronx native, nothing beats a Nathan's Famous hot dog with mustard. At my first-ever ballgame, at the original Yankee Stadium, my dad bought me a dog and, as I prepared to take a bite, he said, "You know, nothing tastes better than a hot dog at a baseball game." I still think so.