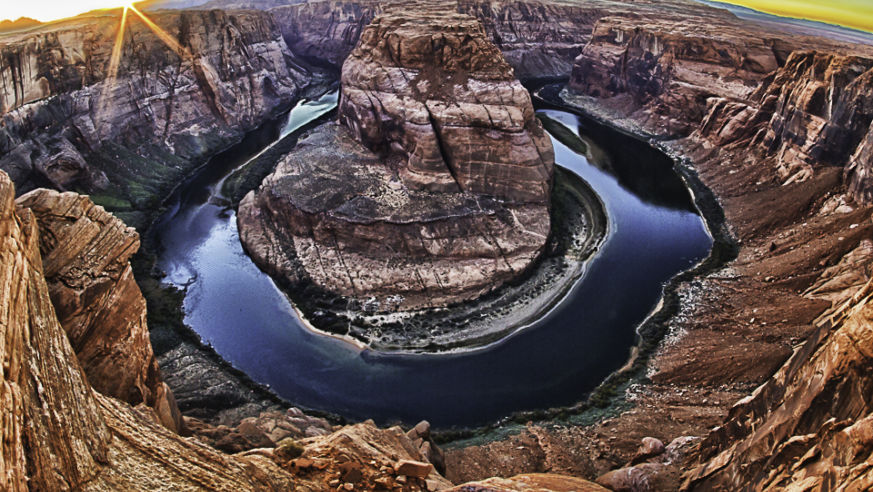 Sure, Horseshoe Bend, in Arizona, is gorgeous. But travelers who geotag it on social media are doing more harm than good.

Think you're following the best "leave no trace" practices when you visit the great outdoors? Even the most conscientious nature-lover can have a negative impact on the environment. Here are five mistakes to avoid.

While "leave no trace" is a familiar refrain to most people who enjoy time outdoors, the truth is that many, even nature lovers with good intentions, sometimes leave their mark in ways that can damage the natural surrounds.

There are many more ways to impact the environment than just neglecting to pick up your trash. To provide guidance, the Boulder-based Leave No Trace Center for Outdoor Ethics, has developed the Seven Principles of Leave No Trace (lnt.org/why/7-principles/) to help people minimize their footprints while enjoying the outdoors. As the following five important "don'ts" illustrate, even the most idealistic travelers can run afoul of the center’s principles and leave an unwanted impact in ways that are not as immediately noticeable as a pile of trash.

These days, an excursion into nature hardly feels complete until you take some pictures and post them on social media. While snapping shots of beautiful natural settings is harmless, pictures that include a geotag indicating the exact locations create what some call a “digital trace,” which can cause increased foot traffic to areas not equipped to handle it. Arizona’s Horseshoe Bend is a classic example of a once moderately trafficked spot that exploded in popularity due to geotagging on Instagram. The Glen Canyon National Recreation Area recently implemented visitor fees and restricted visitation numbers to curb the problem.

In response to the growing over-trafficking issue, Leave No Trace created a set of social media guidelines (lnt.org/new-social-media-guidance/) that suggest, for instance, tagging photos with a state or region rather than a specific location. And better yet: post images that demonstrate good Leave No Trace principles.

2. Don't Stack Rocks in the Name of Art

The temptation to create an artful tower of carefully balanced rocks is strong when you’re sitting next to a river full of smooth, flat stones. Resist this temptation. Rock stacks, also called cairns, have long been used by land managers to mark trails, but over the past several decades, hikers’ random rock towers near rivers and streams have piled up. Not only can creating your own rock art cause confusion and get people lost, but moving rocks around can disrupt the surrounding ecology.

Every river rock contains a mini eco-system of plant life and micro-organisms on its surface, and a variety of insects, fish, salamanders, crawfish, and macroinvertbrae live and lay their eggs under and among these rocks. Moving them exposes the wildlife to predators and the sun, and causes sand and silt around the displaced rocks to erode.

The simplest solution to this issue is to savor time spent next to water in other ways – sketching, journaling, and just relaxing. If you simply can’t fight the urge to stack rocks, Leave No Trace suggests using only stones that are already loose of sand, silt, or soil. Also, only build on hard, durable surfaces. Once your stack is complete, snap a picture, and then return the rocks to their original spot.

When you love animals, it’s hard to resist the urge to toss a few food scraps to a cute chipmunk, a gentle deer, or a charming bird. But feeding human food to animals is never a good idea, and actually harms those critters we claim to love. Human food does not contain the nutrients that wild animals need, and eating it not only damages their health but also alters their natural behavior. Instead of hunting and foraging for food in the wild, human-fed animals will show up in places where humans gather, increasing their risk of being killed by a car, and becoming a hazard to humans and pets.

While intentionally feeding wild animals is a big no-no, it’s important to remember that food scraps unintentionally left in the wild are also harmful. Always store food securely and collect and remove all trash--even those biodegradable apple cores and baby carrots. Also, try to eat over a plastic bag or bandana to catch crumbs so they don’t scatter around the area.

4. Don't Forget to Help Your Dog Leave No Trace

Dogs make great outdoor companions, but it’s important to remember that they can damage protected outdoor spaces just as easily humans. Off-leash dogs can disturb sensitive wildlife habitats like nesting areas and they’re more likely to chase and harm wild animals. In fact, a 2009 Australian study found that the only thing that caused more disruption than off-leash dogs was low-flying jet aircrafts. Dog owners can help their furry friends be good outdoor citizens by respecting dog restrictions in conservation areas and following leash regulations in places that allow dogs. The good news is that there are plenty public lands in the U.S. that allow dogs.

And while this should go without saying, always pick up after your dog. Dog waste doesn’t just smell bad and potentially carry diseases, it also contains high levels of nitrogen and phosphorus that create favorable conditions for harmful algae to bloom and invasive weeds to grow. Putting dog poop into a plastic bag and leaving it beside the trail to collect on the way back is not a viable solution. Leave No Trace suggests investing in a dog backpack to transport the waste. Or try to bring a canister to carry bags away for proper disposal.

When you gotta go, you gotta go, even if there’s no latrine in sight. There is a right and wrong way to poop in the woods, and unfortunately improperly placed human feces is a growing problem in outdoor recreational areas. To avoid pollution of water sources and decrease the likelihood of others stumbling upon your waste in the wild, Leave No Trace suggests hikers and campers create a “cat hole” in a spot that is at least 200 feet--about 70 steps--away from water, trails, and campsites. The hole should be at least six inches deep and four inches wide. (Packing a small trowel can help with this task). When finished, cover the hole with the original soil and then disguise it with some leaves or rocks. Using natural materials such as leaves or snow for wiping is ideal, but a small amount of plain, white non-perfumed toilet paper is okay if buried in the cat hole.

Of course, the human waste option with the least impact is to pack it out. Some popular high-elevation and backcountry sites such as Denali and the Needles district of Canyonlands National Park already require visitors to pack out their own waste, but it is worth considering any time you are hiking in freezing conditions or canyon environment or whenever you are near a body of water. Many people choose a handy W.A.G bag, a double-bag kit which includes waste treatment powder and an outer zip-closing bag.