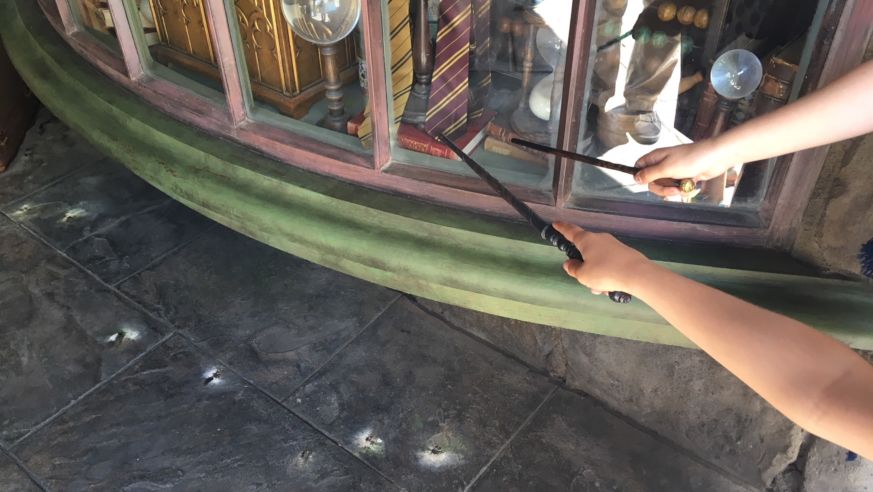 Here’s how to get the most out of your day at Universal Studios Hollywood’s Wizarding World.

Two kids who’ve read each Harry Potter book at least twice. And seen every movie. Two parents who want to squeeze every bit of magic out of one day at Universal Studios Hollywood’s Wizarding World of Harry Potter. We arrive early one July morning, park the car, and embark on what will turn out to be one of the most perfect days of our California summer vacation. Our secrets? Read on.

A little bit of planning goes a long way when tackling a park like Universal Studios Hollywood. Sure, we were there for Harry Potter’s immersive land, but some common-sense tips for visiting Universal (some of which apply to other theme parks as well, of course) worked like one of Hermione’s spells.

Buy your tickets online in advance. What could be more fun than approaching the Wizarding World of Harry Potter, its stately towers looming and the unforgettable John Williams film score blaring? How about entering the Wizarding World an hour before normal park hours? You can do that when you buy your tickets online at UniversalStudiosHollywood.com. Early entrance gives you a chance to beat the long lines for the land’s two super-popular rides, Harry Potter and the Forbidden Journey, and Flight of the Hippogriff.

Download the Universal Studios Hollywood app. You’ll get up-to-date intel on wait times for attractions, set an alert to let you know when wait times are low, suggested itineraries, and even a reminder of where you parked your car.

Get a locker. There are locker rentals just inside the park entrance and in additional locations. We used our locker to store snacks, water, sunscreen, and change of clothes.

Give your kids a souvenir budget. The Wizarding World is packed with incredible shops. Grownups will be struck by the high quality of the merchandise, the eye-popping designs, and the sheer volume of products available. But the inevitable “can we pleeeeeease get just one more souvenir?” will almost certainly become a recurring theme unless you give your kids a firm budget. Frankly, it doesn’t matter whether you tell them they can spend $10 or $100 - they just have to know what the limit is, and you have to be prepared to enforce it. Not only will you end up spending only what you feel you can afford, but you’ll also teach your kids a valuable lesson in shopping.

Don't forget about the rest of Universal Studios Hollywood. Although we, like some other Harry Potter-obsessed families, no doubt, spent most of our day at the Wizarding World, it goes without saying that Universal is packed with other incredible attractions. A Jurassic Park ride, a Simpsons immersive land, and the classic Universal studio tour are just some of the must-sees. If you opt for a studio tour, do it early in the day while wait times are relatively short.

The wait times for the Wizarding World’s two rides can be longer than an hour on a busy day. Regardless of whether you arrive early (thanks to an online ticket purchase) or later in the day, you should head to the rides first, in this order:

Harry Potter and the Forbidden Journey. Even if wait times are long, this ride is so worth it. As you enter through the castle gates and walk down corridors that will be familiar to fans of the Harry Potter books and films, through Hogwarts School of Witchcraft and Wizardry, you’ll stop in Dumbledore’s office, the iconic classroom for Defence Against the Dark Arts, the Gryffindor common room, and more. As cool as those stops are (you don’t really feel like you’re “waiting” but rather already immersed in the Hogwarts experience), nothing really prepares you for the ride itself, in which you soar above the castle grounds, flying with Harry and friends, facing an array of magical creatures (full disclosure: I was a little scared when the dragon appeared to be exhaling real flames in my general direction).

Flight of the Hippogriff. This family-friendly roller coaster is only slightly less packed than the Forbidden Journey, and the ride itself is brief but thrilling. As you wait in line, you pass through the Care of Magical Creatures grounds, Hagrid’s hut, and you even receive instructions about how to approach the Hippogriff (a hybrid eagle-horse).

You’ll appreciate the talent and sheer energy that goes into the Wizarding World’s live shows, including:

Frog Choir. An exceptionally well trained choir of Hogwarts students sing in the open space near the entrances to Harry Potter and the Forbidden Journey and Flight of the Hippogriff, accompanied by their giant frogs, of course.

Triwizard Spirit Rally. Kids will love cheering for the procession of wizarding schools on their way to a tournament.

YOU’VE GOT TO TRY A BUTTERBEER

I was skeptical. Sure, I’d heard from friends and family that the Butterbeer on sale at the Wizarding World was worth every dollar (and it’s a few dollars, believe me). But I wasn’t sure I wanted to load up on cold soda pop first thing in the morning. But the short line at the Butterbeer cart, the beautiful John Williams film score playing from the loudspeakers, and, yes, the eager smiles on my kids’ faces, convinced me to give it a try. And it’s totally worth it, an icy, creamy blend that was especially perfect on a warm July day.

EAT AT THREE BROOMSTICKS (OR TRY AN EASY NEARBY ALTERNATIVE)

Three Broomsticks restaurant is renowned for its great breakfasts and pub grub such as The Great Feast, Fish & Chips, Shepherd’s Pie, and more. It’s also a charming environment, a nice replica of Merry Olde England in the heart of Southern California. The friendly staff deals with wait times politely and efficiently even on busy days.

That said, right outside the entrance to the Wizarding World, there are a variety of restaurants serving Universal guests, and the wait times are often much shorter than at the themed restaurants. On our visit, we opted for Mel’s, a classic California “drive-in” style restaurant whose San Francisco location's interior appeared in George Lucas’s classic coming-of-age film American Graffiti. Mel’s serves up traditional burgers, fries, and shakes for a reasonable price. Basically, we stepped into the America of the 1950s for lunch, then stepped back into Hogwarts for the afternoon.

As mentioned above, it’s essential to give kids a souvenir budget, as generous or as chintzy as you please, to avoid constant nagging and potential meltdowns. That said, the shops at the Wizarding World are exceptional and, in their own way, as engaging as the other park attractions.

Ollivanders, Makers of Fine Wands Since 382 B.C. This shop literally puts on a show, as you watch a wand choose a wizard in an interactive experience. (On our visit, our older daughter was selected out of the crowd to demonstrate this choosing process.) The shop is packed with character wands, wand sets, and Interactive Wands that allow you to cast spells throughout Hogsmeade, the town-square setting in which the shops and restaurants are arranged. (Park staff are on hand to show kids where and how to use their Interactive Wands throughout Hogsmeade.)

Honeydukes. Oh boy. You know that aroma of fresh chocolate when you step into a really good candy shop? Multiply that by 100 and you get the aroma of Honeydukes. Our kids may have spent more time mulling over their souvenir budgets at Honeydukes than anywhere else in the immersive land, with Acid Pops, Exploding Bonbons, Peppermint Toads, Fudge Flies, Fizzing Whizzbees, and Chocolate Frogs, among other sweet treats, lining the shelves.

Owl Post. Kids can send letters and postcards through the U.S. mail with a Hogsmeade postmark from Owl Post, which also sells an array of branded stationery, pens, and Wizarding World stamps. And don’t forget to look up at the robotic owls in the rafters of the shop, which is built in the style of a medieval market hall. Then look down at the (replica) owl poop on the stone floors (you can see some in my photograph, above, taken just outside Owl Post).