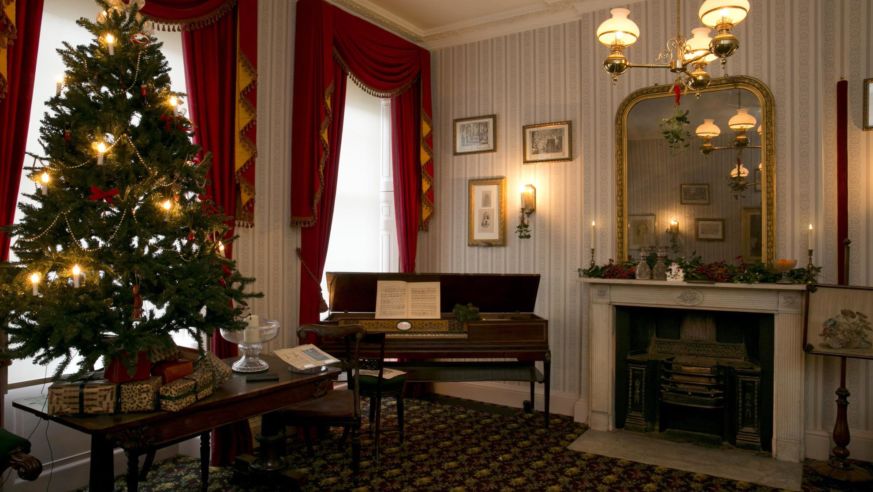 See the charming - and sometimes spooky - streets and alleys where Charles Dickens invented Ebenezer Scrooge, Tiny Tim, and, in many respects, our modern-day Christmas festivities.

On my first visit to London, a doorknocker spoke to me.

Back story: When I was eight years old, I played Tiny Tim in a grammar school production of Charles Dickens’s A Christmas Carol. Though I’m certain my stage debut was nothing remarkable, the experience was pivotal for me. It kindled a lifelong devotion to reading and writing, performing on stage, and studying the life and work of Dickens, who was not only a passionate and often hilarious novelist, essayist, and public speaker but also a social activist.

So, back to that talking London doorknocker. Upon my first arrival in London at age 23, I decided that the best way to see the city was to do as Dickens himself had done: Walk. Everywhere. For hours. I happily took in the city's sights and sounds from my hotel in South Kensington all the way to Fleet Street and Chancery Lane, an area where Dickens-related churches, residences, and courts of law still stand. I wandered up high streets, into little alleys and down courts (essentially scenic "dead-ends" to this native New Yorker), following Dickens-themed guidebooks (this was pre-smartphone) to find what remained of Dickens’s London, including landmarks from his life and a few places where scenes from his novels were set. In one court in particular (it may have been Took's Court, but I don't recall), I came across a cast-metal doorknocker in the shape of a man's face. Not just a man's face, but a smirking man's face. Of course, for this fan of A Christmas Carol, that slyly smirking doorknocker wailed, "Scroooooooooge!” And in that moment, my devotion to reading and writing melded with my budding love of travel. Here, before my eyes, was precisely the type of doorknocker that may have inspired my favorite writer to pen his most famous work.

We know that, in 1843, Dickens conceived A Christmas Carol in a righteous, political frame of mind after reading an account of childhood poverty. But do we, could we possibly know whether there was one specific London doorknocker that inspired him to come up with the scene in which Ebenezer Scrooge imagines that the knocker on his own front door morphs into the ghostly visage of his deceased partner, Jacob Marley? This year, as Christmas approached, I decided to pose this decidedly niche query to Louisa Price, Curator at the Charles Dickens Museum. She did not disappoint me. “It was on Craven Street that Dickens got the idea of the famous scene,” says Price. “We don’t know which one (or if the knocker is still there!) but perhaps go down the street and see which one you think it might be.” Price also suggests that, to get a sense of what Ebenezer Scrooge’s counting house might have looked like, we should spend some time in London’s financial district, known locally as the City, where narrow alleys and courts remain (amid contemporary business towers) to evoke that December of 1843.

The Charles Dickens Museum ($12, 48 Doughty Street, Bloomsbury, dickensmuseum.com) is one of the most popular Dickens-related sites in London, a short walk from the British Museum. The Dickens museum is housed in the Georgian townhouse where the author lived with his growing family as he finished The Pickwick Papers (which, like most of his novels, was published in installments, a bit like a 19th-century Netflix series) and wrote Oliver Twist in the late 1830s. “It is the only remaining family home of Dickens's in London,” says Price. “The house has retained many of its original features, including the washhouse copper, which we believe inspired the Christmas pudding scene in A Christmas Carol. The house has been restored to an 1830s interior as Dickens and his young family would have known it, and it is full of furniture, paintings, and other items that they owned, as well as other treasures from our collection which relate Dickens’s life and times.”

Among the “treasures” in the museum are a few items that will connect viscerally with anyone who has enjoyed Dickens’s fiction. “Certainly the most popular will be Dickens’s desk and chair on which the author wrote his later novels like Great Expectations, A Tale of Two Cities, and Our Mutual Friend,” says Price.

Another popular item at the museum, from Dickens’s mid-career novel Dombey and Son, is a street sign known as “The Little Midshipman.” This item was my personal favorite when I first visited the museum, which was then known simply as the Dickens House. “Dickens once stood outside Norie’s, a shop that sold nautical charts, sailing directions, and navigation textbooks at 157 Leadenhall Street. Dickens was familiar with Norie’s and became so fond of the midshipman that he gave him a starring role in Dombey and Son as the sign of Sol Gil, nautical equipment maker. In the novel he is described as ‘the woodenest of that which thrust itself out above the pavement.' Dickens also describes in The Uncommerical Traveller [one of Dickens’s many collections of essays] how he would pass the figure and pat him on his calf for ‘old acquaintance sake.’”

Not surprisingly, the Charles Dickens Museum goes all out from December 1 through January 6 (Twelfth Night), including an exhibition devoted to A Christmas Carol, candlelit tours, evening readings, and decorations typical of a 19th-century London home.

Guided tours of Dickens’s London run weekly from the museum. Reserve your tour for your next London trip at the museum website.

There may have been no writer before or since Dickens who was as fond of food and drink and the camaraderie of like-minded friends; the novels are filled with accounts of huge dinners, toasts, and revelry. I asked Price if she could recommend a true “Dickens of a pub” in London. “The George and Vulture Pub is the site of the Pickwick Club’s meetings in The Pickwick Papers (it is mentioned about 20 times in total in the book),” she says, referring to Dickens’s first published novel, which relates the travels and extremely funny mishaps of the iconic Mr. Pickwick, his cockney servant Sam Weller, and their friends. “The George and Vulture was built in 1746 as a public house in Castle Court, near Lombard Street, City of London. There has been an inn on the site since 1268. It was saved from demolishment in 1950 by the great-grandson of Charles Dickens, Cedric Dickens. It has been the site of the City Pickwick’s Club meetings and the Dickens family Christmas gatherings ever since.” (Samuel Smith Nut Brown Ale, Oatmeal Stout, meat pies, and other traditional pub fare, 3 Castle Court, 020-7626 9710)

VISIT THE MUSEUM OF LONDON

The Museum of London covers the city’s history from prehistoric times to the present, covering the Roman settlement, medieval times, plague, fire, and various revolutions, with a healthy dose of Victorian-era artifacts and works of art. One exhibit brings a 19th-century London street vividly to life, and one painting in particular will resonate with Dickens aficionados: “The Crossing Sweeper,” by William Powell, depicts one of the young boys, like the character Jo in Bleak House, who made a meager living by sweeping mud, rubbish, and manure off the streets for pedestrians (free admission, museumoflondon.org).

GET TO KNOW DICKENS'S OTHER CHRISTMAS STORIES

While A Christmas Carol is by far the best-known of Dickens’s Christmas-themed fiction, in subsequent years he published several other short novels with holiday themes, including The Chimes and The Cricket on the Hearth. I asked Price if she had a favorite Christmas piece, and I was delighted that she recommended a story I hadn’t read yet. “My favorite is his first bit of Christmas writing, ‘A Christmas Dinner,’ which he first published in 1835,” she revealed. “‘A Christmas Dinner’ begins with: ‘Christmas time! That man must be a misanthrope indeed, in whose breast something like a jovial feeling is not roused - in whose mind some pleasant associations are not awakened - by the recurrence of Christmas.’ The whole piece brims with all of Dickens’s enthusiasm and love of the season and describes a gathering very similar to the ones we know and love now.”