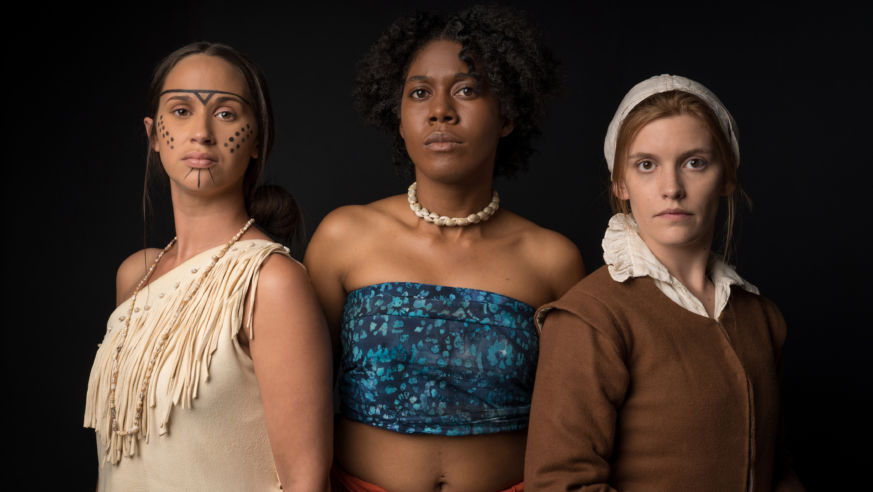 It’s often said that well-behaved women seldom make history. But now, one exhibit is aiming to give some well-mannered women—and a few defiant ones, too—their due tribute. Running through January 2020 at the Jamestown Settlement (historyisfun.org), a living-history museum dedicated to 17th-century Virginia history and culture, Tenacity: Women in Jamestown and Early Virginia highlights women whose stories have been lost to history, although their contributions to society live on.

“We want the show to get a visitor to realize that women of the 17th century struggle with the same things that women did in the 19th or 21st century," says Kate Gruber, special exhibition curator at Jamestown-Yorktown Foundation. "We pulled the collective threads together in the gallery.”

It sounds like a pretty impossible feat, but the curatorial staff at the Settlement sifted through 400 years of history in search of determined, accomplished, yet little-known women to spotlight in the show: women who defied their husbands, women who challenged the status quo in order to be treated as average citizens, and women like Amelia Bloomer, who, in her pursuit to popularize less restrictive clothing for women, created the garment that bears her name today.

“For all the women we know about, there are hundreds more we don’t know,” Kate says. “Men who made Virginia history always got in history books. There are women whose names we have, and that’s it. Women were always a footnote, but if you really dig down in, they’re the ones who were driving the narrative and helping determine how we got here and who we are as nation today.”

Centuries-old tomes of court documents, census records, and letters written by the few literate women of the time were all used to learn about the people who populated the Jamestown settlement and beyond. But here’s where things get really interesting: When you think about the era, an influx of British women comes to mind, but the early 1600s brought the arrival of the first Africans, and, of course, indigenous women had always been in the region.

“It’s not just a story of the English women,” Kate notes. “It’s inclusive, it follows the personal stories. If we know about women, we’ll have maybe a record of their birth, death, marriage or maybe of their arrival in Virginia, but only if we’re very, very lucky, if they did something wrong and there’s a court case.”

The intention of the exhibition, Kate explained, is to draw a connective thread through history, using objects to examine the accomplishments of women. grouped here into five themes: occupation, citizenship, marriage, education, and healthcare. Jamestown Settlement is a fully accredited museum, but for this exhibition, they borrowed items from 22 other national and international institutions—places like the Victoria & Albert Museum, the Museum of London, Shakespeare Birthplace Trust, and the National Archives. From the V&A, for instance, they borrowed a bloomer outfit inspired by the aforementioned Amelia Bloomer.

There are also pieces of furniture and other objects of daily life, as well as documents like census information, which survives in England’s National Archives because it’s part of their colonial history. Some items are coming to the US for the first time to be part of the exhibition, like the Ferrar Papers, which document 56 women who arrived to the Virginia colony in 1621. It's on loan from Master and Fellows of Magdalene College Cambridge, UK, and it will be rotated every 46 days because of the fragility of the paper, they need breaks from the light exposure, a “period of rest.”

It’s safe to say that, at one point or another, most people have had a woman in their life with a magnificent story to tell. Well, now's the time. One of several interactive offerings, the Legacy Wall is a touch screen that presents the stories of women, both contemporary and centuries old, from those who lived in early Virginia through 20th-century icons like Sally Ride. But the exhibit's selected figures barely skim the surface of a history rife with women who made a lasting impact, still felt today, so visitors are invited to add to the roster with stories of influential women they personally know.

Kate says that as the finishing touches were being put on the show, she was preoccupied with all the women who could have been put on the timeline. “Once we got going, we couldn’t just draw a line. That’s the most amazing thing we want people to get out of the exhibition. Once you open the door, it’s kind of a Pandora’s box of these themes. Once you start going down the road of women in what would become United States, you see each one build off the experiences of women before them."