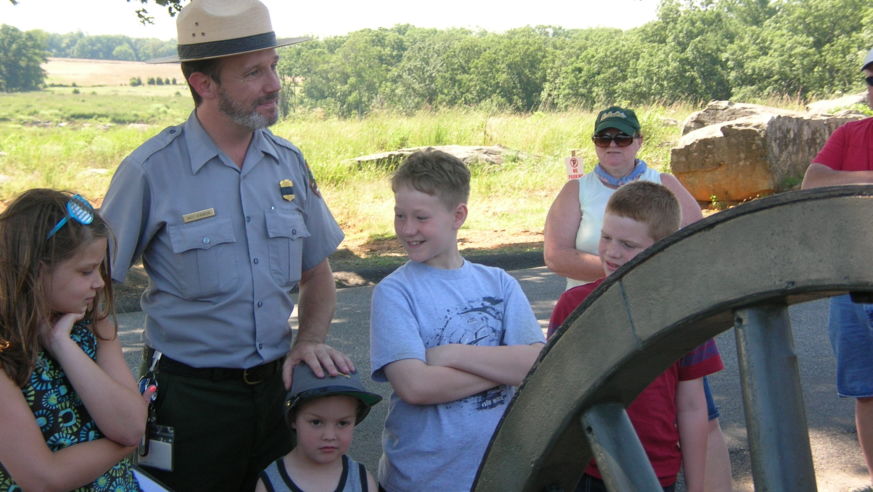 Ranger talks are a highlight of a visit to Gettysburg.

Early July marks the anniversary of the battle that turned the tide of the Civil War. Are your children ready for a living history lesson? Here, a Gettysburg expert shows you how to do it right.

As a little boy visiting the Gettysburg National Military Parkfor the first time, I didn't need to know that this piece of Pennsylvania farmland was the site of the turning point of the Civil War, or how many people had died here over the course of three days in July 1863. On that first trip, historical facts and statistics were trumped by the words "Devil's Den." My father's gentle description of the firefight that had occurred amid the towering gray boulders there, where Union and Confederate soldiers had once crouched for cover, was enough to inspire a blend of fear, awe, and respect that I associate with the place to this day. As an adult, I've caught myself saying, "I don't believe in ghosts, but I believe in Gettysburg."

Gettysburg, Pennsylvania, is located just north of the Mason-Dixon line about an hour and 20 minute's drive from Baltimore and two hours and 20 minutes from Philadelphia. Here, in early July, 1863, General Robert E. Lee led his rebel Army of Northern Virginia across the Pennsylvania border in an attempt to seize Washington, D.C., and force a Union surrender. What happened here, with American fighting American, often hand-to-hand, changed the course of U.S. history, with Lee's army eventually forced to retreat. Each summer, as the battle anniversary nears, the museum, the cemetery where President Lincoln delivered his Gettysburg Address in November of 1863, and the winding trails of national parkland play host to armies of tourists and history buffs. And, yes, for better or for worse, children will be cajoled, bribed, or dragged into the action. But Gettysburg ain't Disney. How you introduce kids to a place like this can mean the difference between igniting a spark of historical curiosity and sending them screaming for the snack bar. Here, some expert advice on showing your little ones how to tread lightly on hallowed ground.

PLAN YOUR VISIT IN ADVANCE

I spoke with Barbara J. Sanders, education specialist at Gettysburg National Military Park, for her suggestions about the best way to introduce children to this historical site and the troubling chapter in American history that it represents. Sanders suggests visiting the park's website (nps.gov/gett) as well as the website of the park's partners, the Gettysburg Foundation. "By planning the trip together and allowing each member of the family to select an activity of interest, everyone will become involved and excited about their upcoming visit," Sanders suggests. She also recommends reading some age-appropriate books about the battle of Gettysburg, or about the Civil War, together prior to the visit. At Gettysburg, or What a Girl Saw & Heard of the Battle is an autobiographical account of the battle written by a woman who witnessed it as a young girl—appropriate for grades four and up. Jimmy at Gettysburg is the true story of Jimmy Bighams, who also experienced the battle first-hand as a boy—suitable for grades three and up. For parents who could use a little grounding in Civil War history, Ken Burns's documentary film The Civil War remains the gold standard for its clarity, elegance, and emotional wallop. For a deeper dive, Shelby Foote's trilogy, The Civil War: A Narrative, reads like great fiction. The park's website also features a robust "For Teachers" section intended to help with planning class trips but easily adapted by parents who are wondering where to start, what elements to teach their children, and what they might want to leave out.

ARE YOUR KIDS READY FOR GETTYSBURG?

"There's something at Gettysburg for all ages," Sanders insists. She points out that even very young kids often shout "Abraham Lincoln!" when they see the president's statue in front of the park's visitors center, and even if that's their only touchstone here, they can see the spot at the Soldiers' National Cemetery where he delivered his Gettysburg Address in November 1863, and even stand in his footsteps at the train station where he arrived in town. Of course, for elementary and middle school kids, there are themes presented at Gettysburg that will require either preparation or explanation. A film, dramatic 360-degree painting, and museum all help to put the conflict, the issue of slavery, and the sheer loss of life that occurred here in their historical context. The National Park Service and the Gettysburg Foundation offer a variety of children's education programs in summer that allow young visitors to learn as much—or as little—as they feel is right for them. "The focus of the trip should be to connect to the place and the people, and ignite a spark of interest in the minds of the kids," says Sanders.

For a summertime visit to a place as big as Gettysburg (a typical auto tour covers 24 miles), a friendly guide and some kid-friendly activities may be as essential as sunscreen, insect repellent, and water. Sanders recommends that you consider booking a personalized tour of Gettysburg. You can book a Licensed Battlefield Guide in advance, or take your chances with a first-come-first-served sign-up each morning at 8 a.m. The guide can accompany you in your car on a two-hour battlefield tour—it's essentially like having a teacher along for the ride to lead you to the most important sites and answer your family's questions. Gettysburg also offers free summer ranger field programs—sign up first thing at the visitors center information desk as space is limited, and pick up Junior Ranger activity booklets.

The most common approach to Gettysburg National Military Park is to start at the visitors center and museum, then embark on the 24-mile self-guided auto tour (an annotated map shows you the route and points out the major battle sites along the way). While the museum is a must-see with an extensive collection and interactive education stations, and visitors should try to plant their feet on key spots around the park, such as the site of Pickett's Charge (the doomed Confederate attack that turned the tide of the three-day battle), there are other, better ways for kids to really experience Gettysburg. "My recommendation is for families to find a specific person, or a specific regiment that they are interested in learning more about," says Sanders. As many families have experienced when visiting a museum dedicated to, for instance, immigration, or tolerance, or slavery, sometimes tracking the progress of just one person through a difficult chapter of history is far more rewarding than trying to understand the bigger picture, especially for grade-school children.

"For example, if a family is coming from Alabama, they could research the 15th Alabama Infantry and follow their path from July 2, 1863 as they launch repeated attacks on the end of the Union line, occupied by the 20th Maine Infantry," Sanders suggests. "Or if a family is interested more in the farmers and civilians, they could learn about the John Slyder family, and then visit their farm at the base of Big Round Top, or Abram Bryan, a free black farmer whose house and barn was located near the very center of the Union line on July 3." Got a dog? Tell your kids the story of Sallie, the canine mascot of the 11th Pennsylvania Infantry, and a visit her monument near Oak Ridge.

LET YOUR KIDS TAKE THE LEAD

Give the little ones the elbow room to experience the place on their own terms—as Sanders suggests, and as my own parents did for me all those years ago. You may not entirely understand why your child is, say, fascinated by a particular field, or artifact, but be assured that they are processing this complex chapter in our history the very best they can. A visit to Gettysburg is not a time for lectures. Whether they come home with a solid sense of history's sweep or just the indelible memory of one soldier's few days on this rolling farmland, you'll have ignited a spark.

HOW TO GET THERE