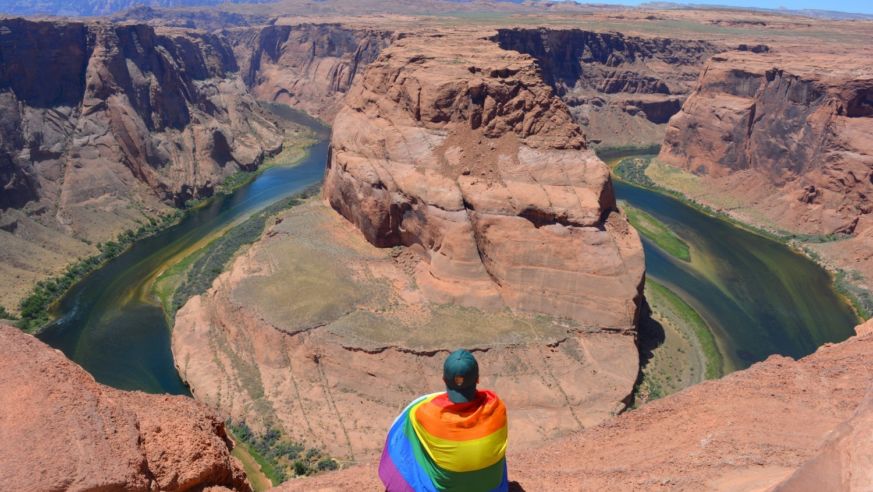 Mikah Meyer at Horsehoe Bend while visiting all 419 national parks in the U.S.

From the Everglades to Denali, from Joshua Tree to Acadia—and every park, monument, and historic site in between—Mikah Meyer has truly seen every corner of the NPS.

After three years on the road, a Nebraska man has achieved his dream of visiting all 419 national parks in the U.S. in one trip.

Now working as a public speaker, Mikah Meyer (33) has just returned from traveling more than 75,000 miles in a cargo van, which contained a bed and a solar-powered fridge. He was inspired by losing his 58-year-old Lutheran pastor father to cancer when he was 19. “I learned a hard lesson at a young age that we really won’t have all the time we think to pursue our life goals,” he tells Budget Travel's parent company, Lonely Planet. “My dad was a big fan of road trips, so I did my first independent road trip just a few days after his funeral.”

National Parks: The Story of a Nation

Mikah documented his trip on Instagram, and images and videos show him camping, snorkeling, hiking and posing with landmarks and monuments. National parks are special because they tell the story of a nation, he says, and they are available to everyone. In the age of the smartphone, he loved being able to witness their incredible beauty and majesty in person. “There’s just something special about being awed in a way that no digital medium can capture,” he says.

Of all the parks he visited, Mikah was most enchanted by Dinosaur National Monument in Colorado. Geese hold symbolic significance in Lutheranism, and while he was there, he had what he describes as It was one of the most “magical and mystical experiences” of his journey, when he met a goose he christened George.

“It didn’t hurt that during a four-day, three-night rafting trip down the Green River that travels through the park, I was followed by a wild Canadian goose the whole time,” he says. “This park is special as there are recreational activities like hiking and rafting, incredible vistas along with up-close nature viewing, and it’s full of history due to all the dinosaur bones discovered there.”

Mikah says that traveling alone can be fun because it gives us opportunities to meet new people and expand our human circle. But traveling alone when you’re trying to set a world record and having to spend most of your free time in libraries on your computer doing logistics, blogging and fundraising is not the same. “Even though I was going to some of the most beautiful places in America, I wished I had someone to share them with,” he says. “Three years is a long time to not get to have a regular beer with a friend, or see family members during normal holiday visits.”

The highlight for him was that he actually successfully completed such a behemoth of a road trip. It also taught him the beauty of having a wonderful place to come home to, of seeing family and friends regularly, and being able to be part of a local community. As a gay man, he also loves the idea of being an inspiration to others.

“When I started planning this project, I searched for openly gay outdoorsy role models and didn’t find anyone I could look up to,” he says. “Knowing that this journey has provided that for other people has been one of my proudest moments. And accomplishing a feat that no person has ever done before makes me proud to show that not only can gay people be ordinary, but we can also be extraordinary.”

“For a kid from Nebraska who thought I might never make it out of my home state, it’s an incredible feeling to know I’ve now seen every corner of the US, and all 419 of our National Park Service sites.”