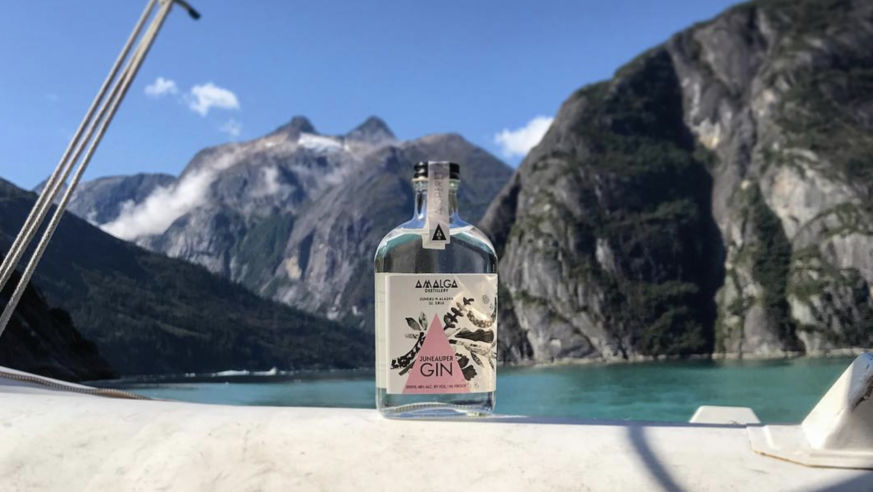 From breweries to distilleries to stand-out bars, no trip to Alaska would be complete without trying the local libations.

There are few better places to get a genuine, unfiltered sense of a city than its bars. There’s a reason people call them their “local,” after all. And in a place like Alaska, where cities and towns are remote and the urge to hunker down for a long session with friends is hard to resist, bars can sometimes seem like a stand-in for the local community center. The idea of a bar, however, has extended far beyond a slab of mahogany. These days, as creative entrepreneurs open breweries and distilleries, they’ve made a bar a central aspect of their business, providing not just a place to hang out but a place to showcase the fruits—and grains—of their labors. Like wine, spirits and beer can express terroir, a term used to refer to a sense of place—a certain je ne sais quoi, if you will. Here are eight spots along Alaska's south coast and in the Interior where you can drop in and soak up local flavor.

Before “craft brewing” was part of every bartender’s lingua franca, there was Alaskan Brewing Company (alaskanbeer.com). This Juneau company was founded in 1986 by Geoff and Marcy Larson, a chemical engineer and a bush pilot, respectively. They still run it today, and over the past several decades, they’ve established themselves as solid trailblazers, racking up piles of awards (they’re the most award-winning brewery at the popular Great American Beer Festival), not to mention a robust cult following that snaps up their limited-edition brews each year. A tour of the brewery reveals the brewing process, gives a peek into how their creative beers come to be, and offers a rundown of the company's interesting history. Of course, you don’t have to go on a tour to hang out in the tasting room, where their flagship beers and a few limited edition ones, too, are available to sample. 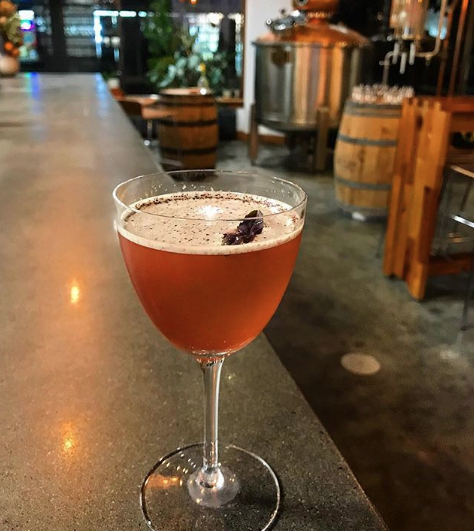 The American craft distilling industry has been growing at a steady clip, with the number of distilleries, as of September 2018, clocking in at 1,835 and counting. Juneau’s entrant, Amalga Distillery (amalgadistillery.com), is a destination for spirits aficionados and pretty much anyone who likes a well-made cocktail. Husband and wife Brandon Howard and Maura Selenak are at the helm, doing everything from distilling the spirits to serving the drinks in the vibrant bar room, a bright, downtown Juneau hangout with floor-to-ceiling windows and a mighty yet elegant still anchoring the space. While their whiskey ages, the gin, made with a variety of local botanicals, takes center stage, with gin cocktails that keep the crowd lively. Be sure to check out the shop so you can bring a bottle or two home with you. 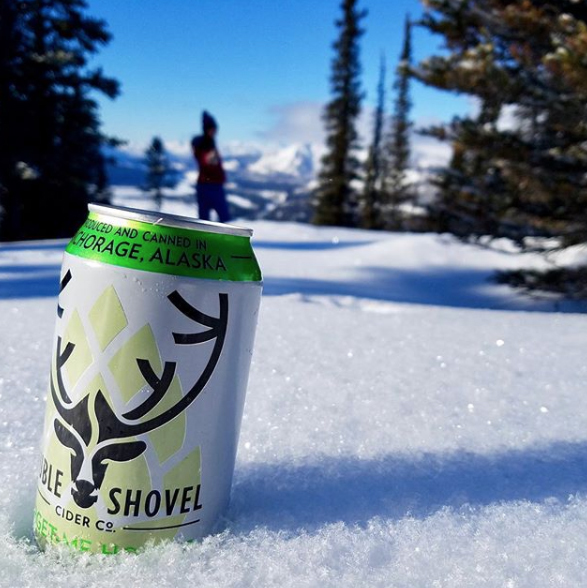 While drink-loving entrepreneurs around the United States open breweries and distilleries, Galen Jones, Jerry Lau, and Jack Lau, three engineers and childhood friends from Anchorage, saw a need—or at least a gap—for something else. They opened Double Shovel, a hard cidery, in 2016, and it’s been going strong since. At the laid-back industrial-chic tasting room, you can sample a range of their ciders and get a great crash course in production from the knowledgeable barkeeps while you’re at it. Lesson number 1: Cider is naturally gluten-free. Seasonal options are on tap, and a recent summer visit offered pineapple, grapefruit lavender, and blackcurrant sour in addition to the regular options, like extra-dry and hopped. 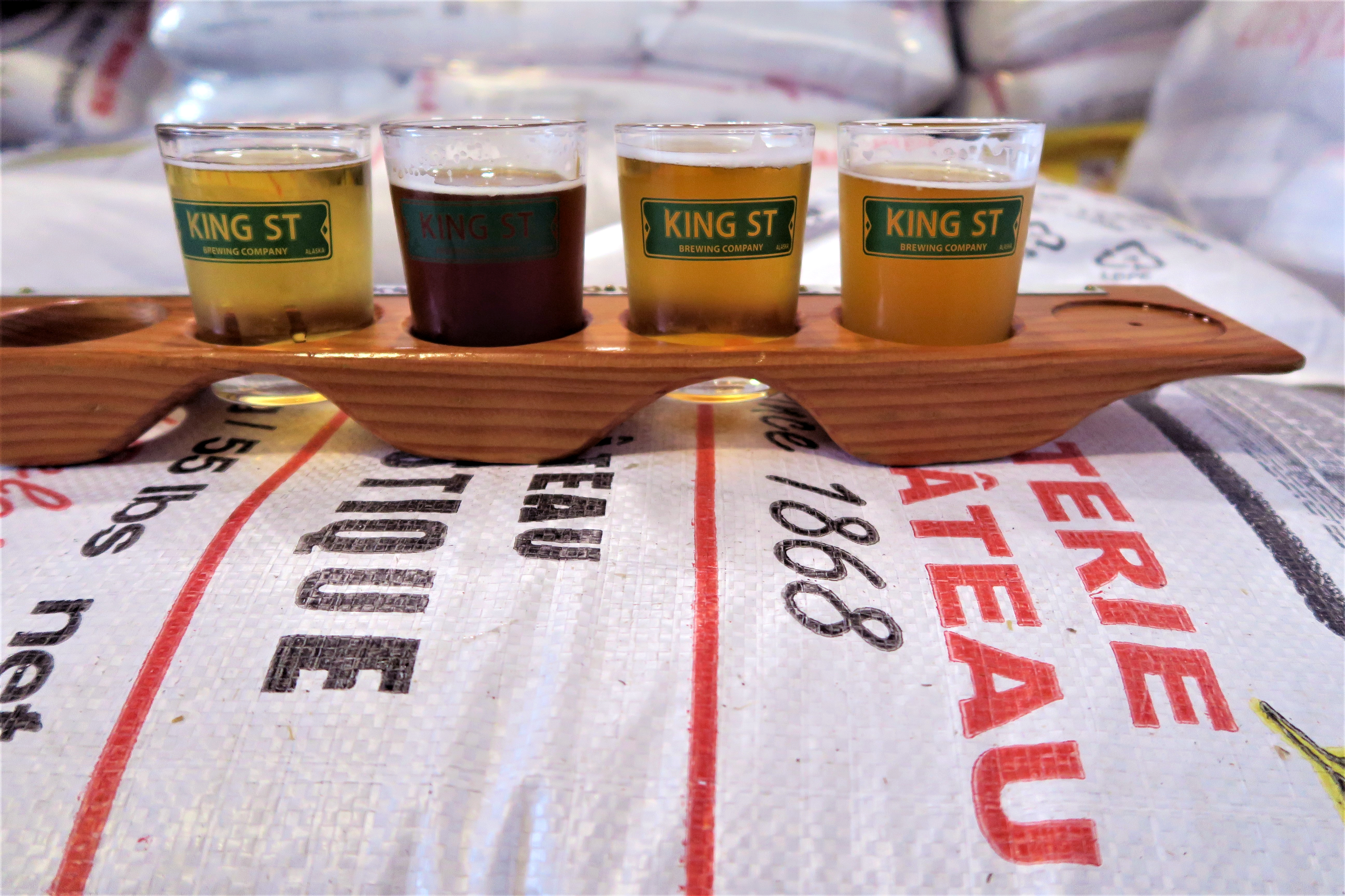 Bryan Caenepeel and his wife know and love Anchorage beer. More importantly, though, they are very skilled at sharing the love. With their company, Big Swig Tours (bigswigtours.com), the husband-and-wife team takes visitors on a brewery—and brewpub—crawl, offering a behind-the-scenes look at each. Brewers are typically on hand at each stop to explain their particular beers and personal philosophies, as well as their breweri' history. And, of course, samples and snacks are offered at each stop to ensure you walk away with a complete understanding of their work. Whether you're a beer geek who likes to talk about yeast and water quality or just a committed appreciator, the afternoon is worth its weight in grain, particularly because most Alaskan beers are not available outside the state.

Fiori D’Italia (fioriak.com) is an unremarkable compound-like building that sits at the end of a parking lot in a residential neighborhood, far from the hustle and bustle of downtown Anchorage. To call it a “hidden gem,” however, would be a huge understatement. This old-school Italian red-sauce joint looks like something out of a Scorsese movie and serves pasta dishes, lasagna, steak, and all the other classics you’d expect, but what’s more of a surprise is the massive selection of whisky—mostly single-malt Scotch—available at the bar. The restaurant is a family affair, with husband and wife Ulber and Urime, natives of the former Yugoslavia, helming the kitchen and front-of-house, respectively, and their son, Ylli, running the impressive bar. Let him make a recommendation based on what you know you like or trust him to make his own suggestion. Or just ask for the balsamic martini, a house specialty.

It’s hard to describe Chilkoot Charlie's (koots.com), a roadside attraction that looks like a huge log cabin from the outside and nothing like a log cabin from the inside. The building contains a warren of ten bars, including, but not limited to: the Show Bar, decked out with Berlin Wall and Soviet memorabilia; the 1940s-themed Swing Bar, which features DJs, a dance floor, and many martinis; and the rustic North Long, which delivers live music every night and a remarkable steak-dinner deal on Wednesdays. There are live performance spaces and dance floors too. You will, however, want to make your way back to the jukebox-equipped Bird Cage, where, most nights, you’ll find octogenarian (and Alabama native) Wanda Price perched behind the slanted, weathered bar serving drinks and wisecracks. A software salesperson turned bouncer turned salty barkeep, Wanda runs the show here. Just whatever you do, don’t ask her why there are so many unmentionables hanging on the ceiling rafters. You might end up finding out for yourself. And, for lack of a better word, regretting it. 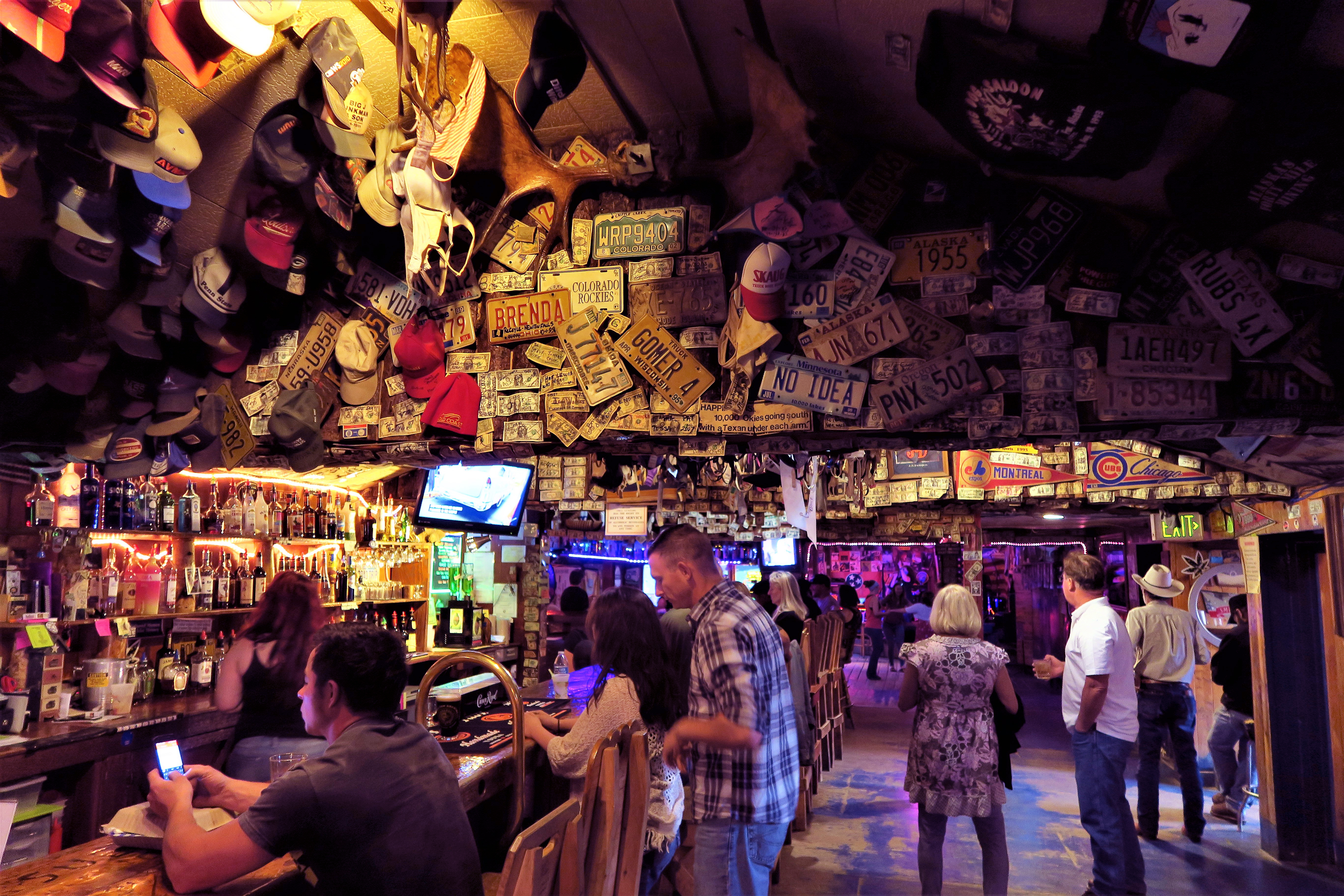 Howling Dog Saloon (howlingdogsaloonak.com) is the kind of place that you want to stay for long stretches of time. It’s not the drinks—they’re everything you’d expect from a dive bar—or the familiar pub grub that the kitchen cranks out. It’s everything else: the chatty bartenders, the history (it was established in the mid-1970s, and Pope John Paul II and Ronald Reagan dropped in during their historic 1984 meeting in Fairbanks), the décor, which tells the story of a community, and the live music, from blues to funk to country, a regular weekend affair. Oh, and there’s the sandpit in the back for beach volleyball in the warmer months. (And yes, though temps in Fairbanks can sink pretty low into the negative realm in the winter, summertime brings plenty of sun and even steamy heat.) Owner Ralph Glasgow, who’s run the place since he bought it in 2003, is often found roaming the floor, checking in with the many regulars. Ask him about rogues' gallery of locals whose portraits hang on the walls. There’s a rich story behind each character. 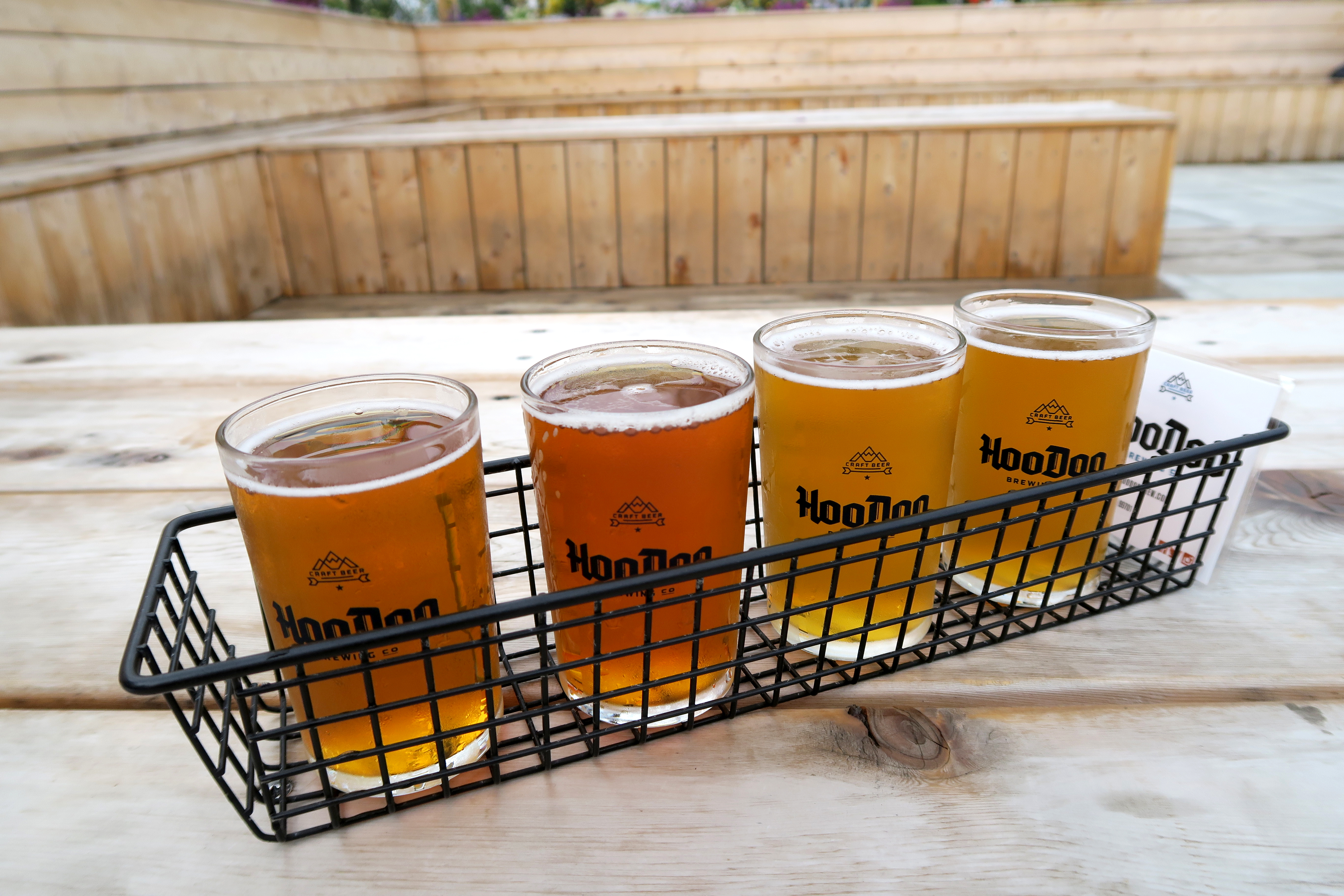 HooDoo Brewery is known for its commitment to classic-style beers. (Liza Weisstuch)

In their comprehensive book, Beers of the North: A field Guide to Alaska and the Yukon, Clint J. Farr and Colleen Mondor note that a German Kolsch and American IPA are HooDoo Brewing Company's (hoodoobrew.com) most popular beers. “The German Kolsch is a testament to simplicity, tradition, and quality. Wilken uses the same hops, malt, and process found in Cologne, the beer’s birthplace,” they write. That authenticity is part of what draws crowds to this airy Fairbanks taproom. Alaskan Brewing Company alum Bobby Wilken opened the brewery in 2012 after extensive travels and brewery-hopping in Europe, which explains his mastery of German-style beer. It also explains the biergarten-style patio, which has the feel of a neighborhood gathering spot in the warmer months. Free tours are offered every Saturday at 4:00 p.m.