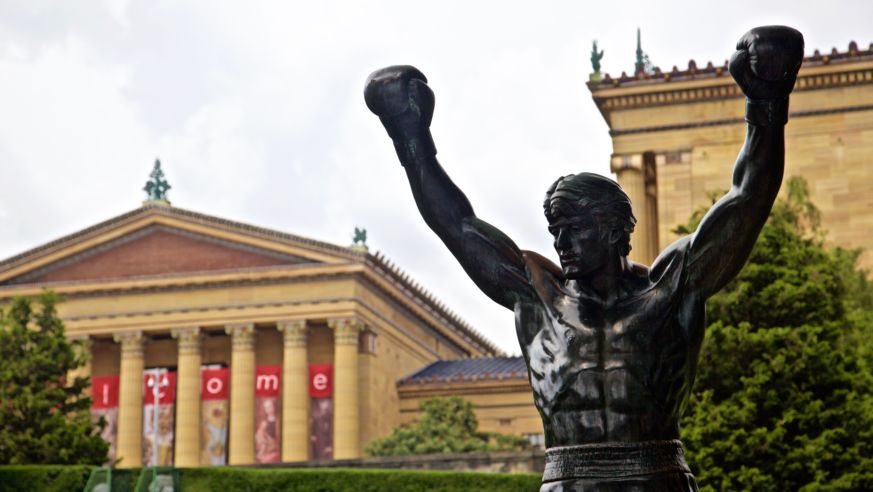 From Rocky Balboa to ravenous zombies, from rom-coms to sci-fi, these great vacation destinations are where some of your favorite television shows and motion pictures were shot.

Sure, Los Angeles and New York City get most of the credit and the glory. But many movies and TV shows are actually shot in incredible locations around the country. Lights! Camera! Action! Here are our eight favorite location tours.

Bahstan is a filmmaker’s town. It’s home to Ben and Matt, after all, and also to more than 400 movies and TV shows. Find out why it’s so popular on this walking tour. Drinks at the Bull and Finch Pub, for Cheers, are an absolute must. Then sit on the park benches where Robin Williams and Matt Damon chatted in Good Will Hunting, check out the historic homes in The Thomas Crown Affair and get “made” at one of Jack Nicholson’s mob hangouts from The Departed. (Sorry, make that the Depahted.) Wicked cool: getting to read scripts exactly where they were shot.

The. Walking. Dead. Need we say more? Watch clips from the show on a comfy bus as you visit exact locations. The hospital where Rick first woke up from his coma. The Goat Farm Arts Center abandoned building from “the Vatos.” The Jackson Street Bridge (selfies encouraged!). Every tour is led by a zombie extra who offers insider-only deets and runs a killer trivia game session. (Did you know that HBO passed on the series because it felt it was too violent?) Huge fans should sign up for Parts 2 and 3, plus there’s a walking tour!

If you’re lucky, you’ll hear the director yell “cut!” during this NOLA excursion, which offers a fun mix of live filmmaking (as of press time, NCIS: New Orleans was shooting), celebrity homes (Sandra Bullock! Brad Pitt!) and location tours including NOLA standbys Interview with the Vampire, Vampire Diaries, True Blood, American Horror Story, and Twilight. Don’t worry, the classics are represented too, including A Streetcar Named Desire and Easy Rider. All neighborhoods are covered, including the French Quarter, the Warehouse District and the Garden District.

Wilmington, NC, otherwise known as “Wilmywood” or “Hollywood East,” has been a moviemaking mecca since director Mark L. Lester shot Firestarter here in 1983. Customize your tour and see the locations for teen faves Dawson’s Creek (the famous dock where Dawson pined away for Joey) and One Tree Hill (Blue Post Billiards, where Lucas and Sophia went on their first “tattoo” date), Cape Fear (the Memorial Bridge), Dream a Little Dream (the Coreys’ high school) and Weekend at Bernies (the lighthouse where Parker gets temporarily blinded). Or check out movie props, set pieces, and interiors, hear about your favorite actors, or find out how a winter wonderland is created in the heat of summer.

A vintage bus takes you 45 minutes from Honolulu to Kualoa Ranch, a 4,000 acre nature reserve billed as “the backlot of Hawaii” thanks to its role in dozens of movies and TV shows since the 1950s, including Jurassic Park, Lost, Magnum P.I., The Hunger Games, Jumanji, Hawaii Five- O, and Pearl Harbor. Examine Godzilla’s footprints, stand at the Jurassic Park gate, and check out the bunkers on Lost. An amazing World War II army bunker houses lots of props, movie posters, and memorabilia.

Chi-town neighborhoods absolutely make this tour - Wrigleyville Uptown, the Gold Coast, Old Town – all home to more than 80 films over the past 100 years. Check out locations from Ferris Bueller’s Day Off (where surely you’ll want to “Twist and Shout” through Federal Plaza), The Dark Knight (the Chicago Post Office), Transformers 3 (The Uptown Theatre), My Best Friend’s Wedding (the White Sox ballpark), and The Untouchables (South La Salle St.). A tour guide offers up fun film facts and trivia. (Did you know: “Twist and Shout” is the only original version of a Beatles song to appear twice in the top 40, thanks to FBDO and Matthew Broderick’s famous parade scene.)

Lace up your running shoes to take on the 68 steps of the Philadelphia Museum of Art, Rocky-style. This tour takes you there, plus past City Hall, the Italian Market and Ninth Street where Rocky did his training runs. Check out scenes from Tom Hanks’ Philadelphia including the law firm building where Andrew Beckett worked (The Mellon Bank Building) and the library where he studied case law (The University of Pennsylvania Fine Arts Library). The Sixth Sense (St. Augustine’s Roman Catholic Church), Trading Places (Rittenhouse Square), and Twelve Monkeys (the Met Theatre) are also big stars on this tour.

Where else you gonna shoot movies like Air Force One, Independence Day, A Few Good Men, and Mr. Smith Goes to Washington? Our nation’s capital is a Hollywood dream with some of the most recognizable buildings and monuments in the world (the Lincoln Memorial is host to drunken nights in Wedding Crashers; Constitutional Hall serves as the White House in the West Wing; the reflecting pool is seen in Forrest Gump, The Firm, and Deep Impact, to name just a few). This tour explores them all, starting in Union Station seen in Hannibal, Minority Report, and the Sentinel, takes you to the steps of the house in The Exorcist, past the bar in St. Elmo’s Fire and to the mall in True Lies. Bonus: Tours are led by local actors.