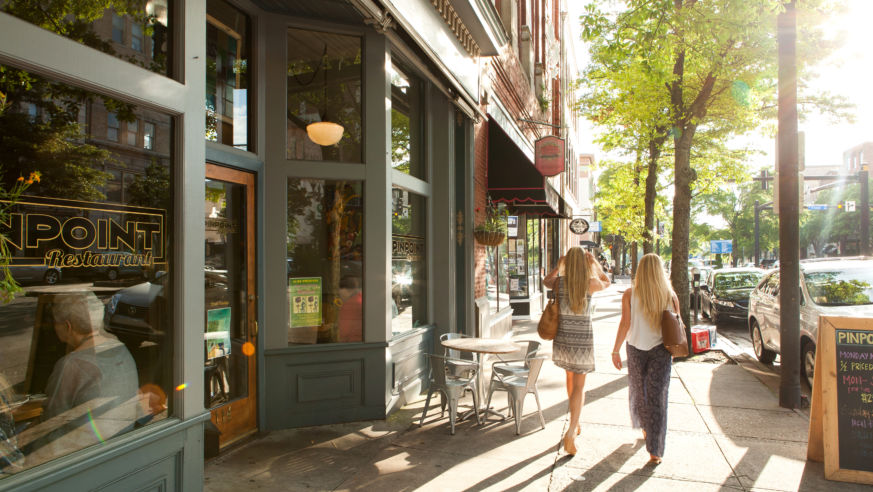 This port city offers more than just your typical Southern food. But don't worry—it has fantastic fried chicken too.

As a coastal community below the Mason-Dixon line, Wilmington's restaurants feature seafood and Southern cuisine galore, but the city also provides a variety of less-expected options, with everything from Cajun to Korean on offer. (That said, on my recent visit, I primarily stuck with seafood and Southern cuisine, because when in Rome, etc.) Sure, entrees at some of the more upscale places can run a bit high, but you'll find plenty of relatively inexpensive alternatives in the area too, as long as you know where to look. Here are six delicious, budget-friendly bites from my last trip to Wilmington and nearby Wrightsville Beach—each one $16 or less. 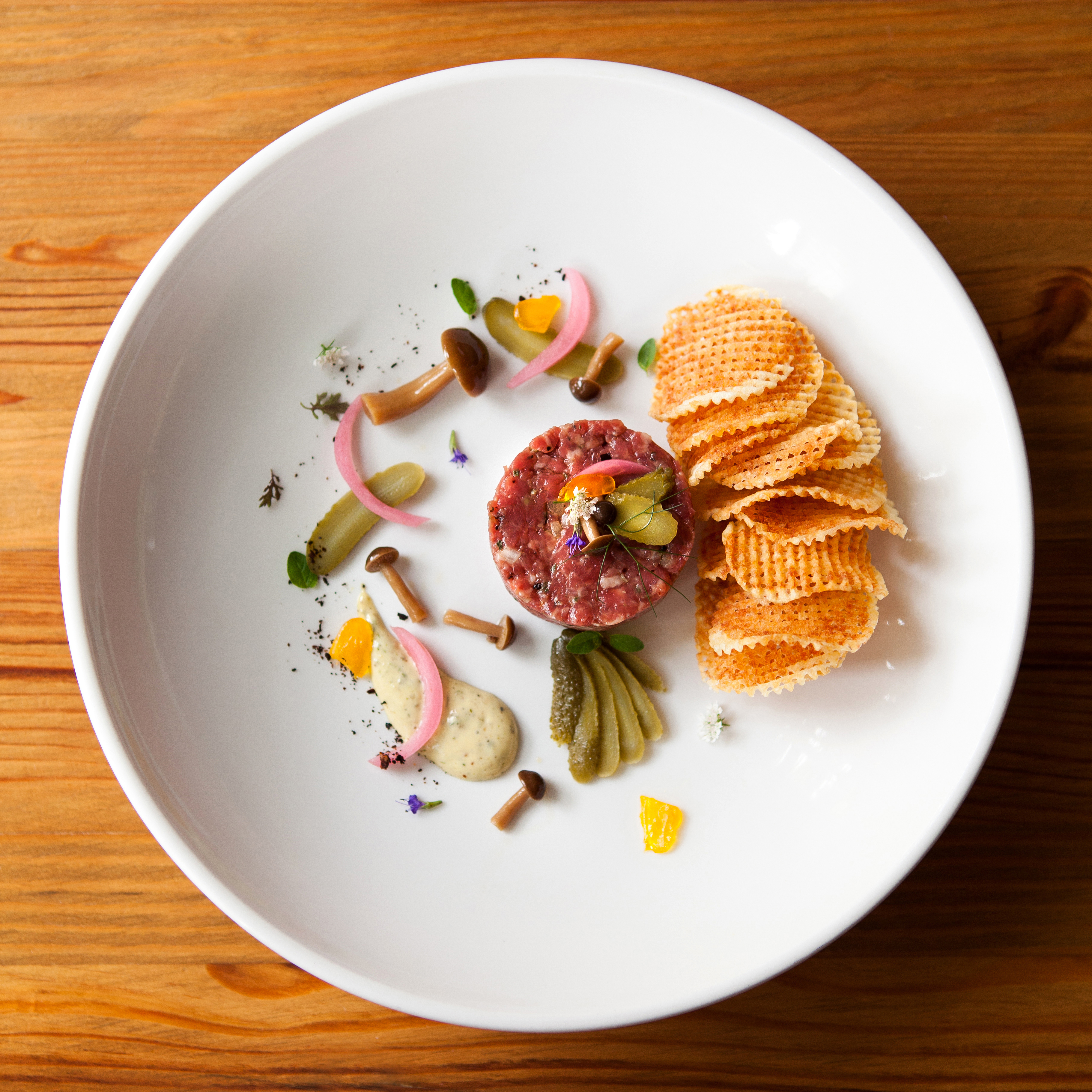 Any decent French bistro can provide a serviceable steak tartare, but if you’re craving something with a bit more flare, this gussied-up take from downtown-darling PinPoint is just the ticket. Chef Dean Neff’s critically acclaimed menu puts a refined spin on traditional Southern recipes and regional ingredients—say, hummus made with North Carolina butterbeans instead of the customary garbanzos, or baked oysters with a ridiculously good local-shrimp topping to complement the usual butter and breadcrumbs. Everything I tried, from the octopus-and-pickled-shrimp lettuce wraps to the smoked-and-fried catfish to the decadent oyster stew to the bountiful seasonal vegetable plate, was out of this world. But if I had to return for just one dish, it would be the beautifully composed plate of beef tartare ($16), a puck of raw meat, perfectly chopped and seasoned, surrounded by an artful assortment of pickled beech mushrooms, fennel fronds, an intriguingly textured preserved egg yolk, dabs of caper aioli, and a pile of house-made waffle-cut potato chips. For an elegant treat-yourself meal, run up the tab a little and add a glass of sparkling rosé ($12) to start and one of pastry chef Lydia Clopton’s indulgent creations, like the amazing passion fruit tart with fromage-blanc sorbet and honey-chamomile caramel ($8), to finish. You won’t regret a single bite. 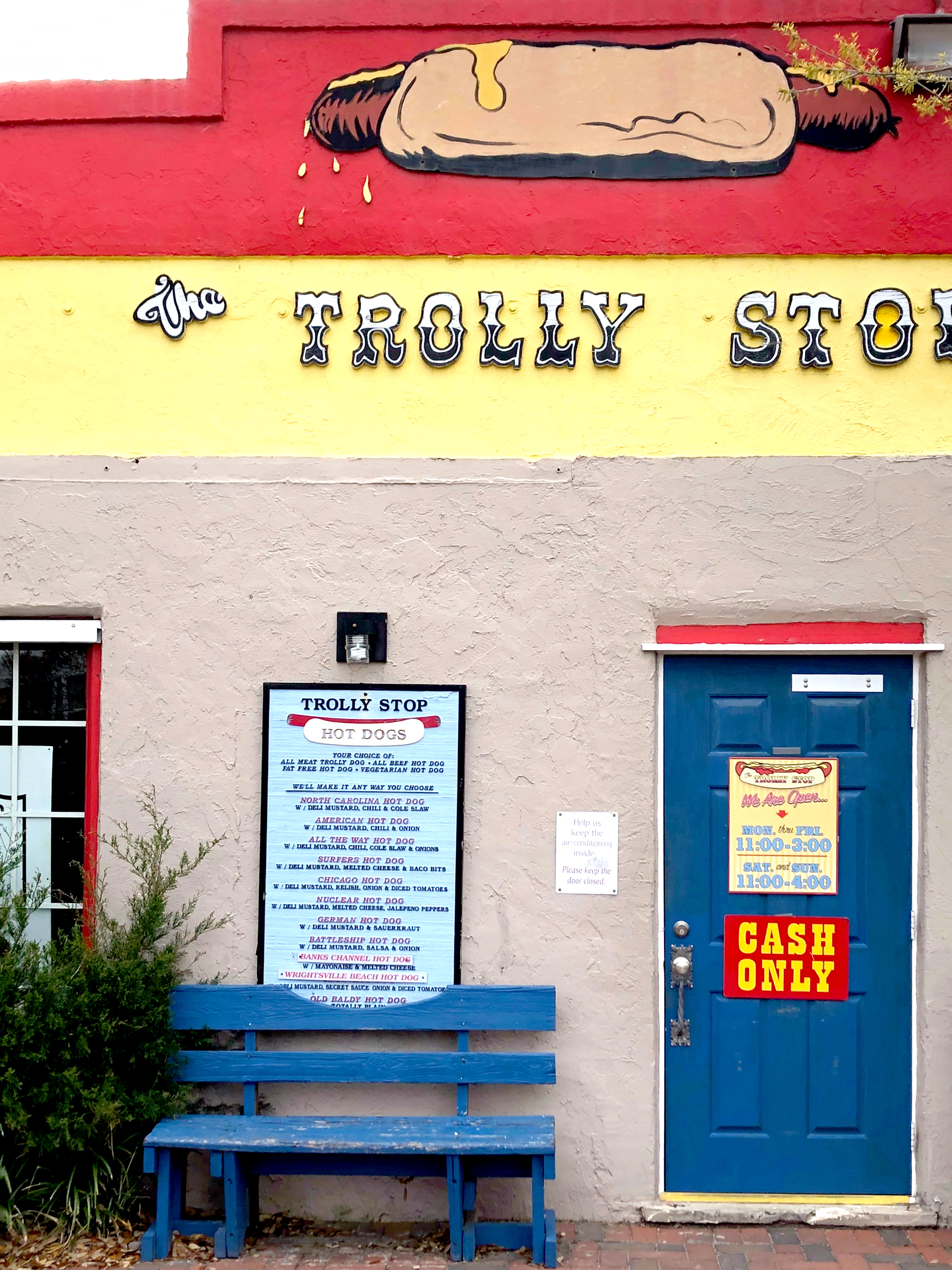 With four franchises across the state, this mini-chain has been keeping North Carolinians’ hot-dog cravings at bay since 1976. The original location, just over the bridge from downtown Wilmington in Wrightsville Beach, makes for a perfect pit stop, both before hitting the sand or after a day spent in the sun and salt air. The selection of sausages is meat-centric, as you might imagine, with all-beef, beef-and-pork, ground-beef, smoked-pork, and turkey varieties on offer, but there’s a vegetarian option as well, and all veggie toppings are chopped fresh daily. To build your own, pick a dog and an array of accompaniments (on the lighter side, perhaps relish, diced onions, sauerkraut, or salsa; on the heavier, bacon, cheddar, or chili), or choose from one of the pre-paired styles listed on the wall. I went with the German, deli mustard and kraut on an all-beef “northern dog” ($3), and while I missed the snappy casings of the griddle-cooked franks from my hometown go-to, Gray’s Papaya, it was still a satisfying snack that disappeared way too quickly. 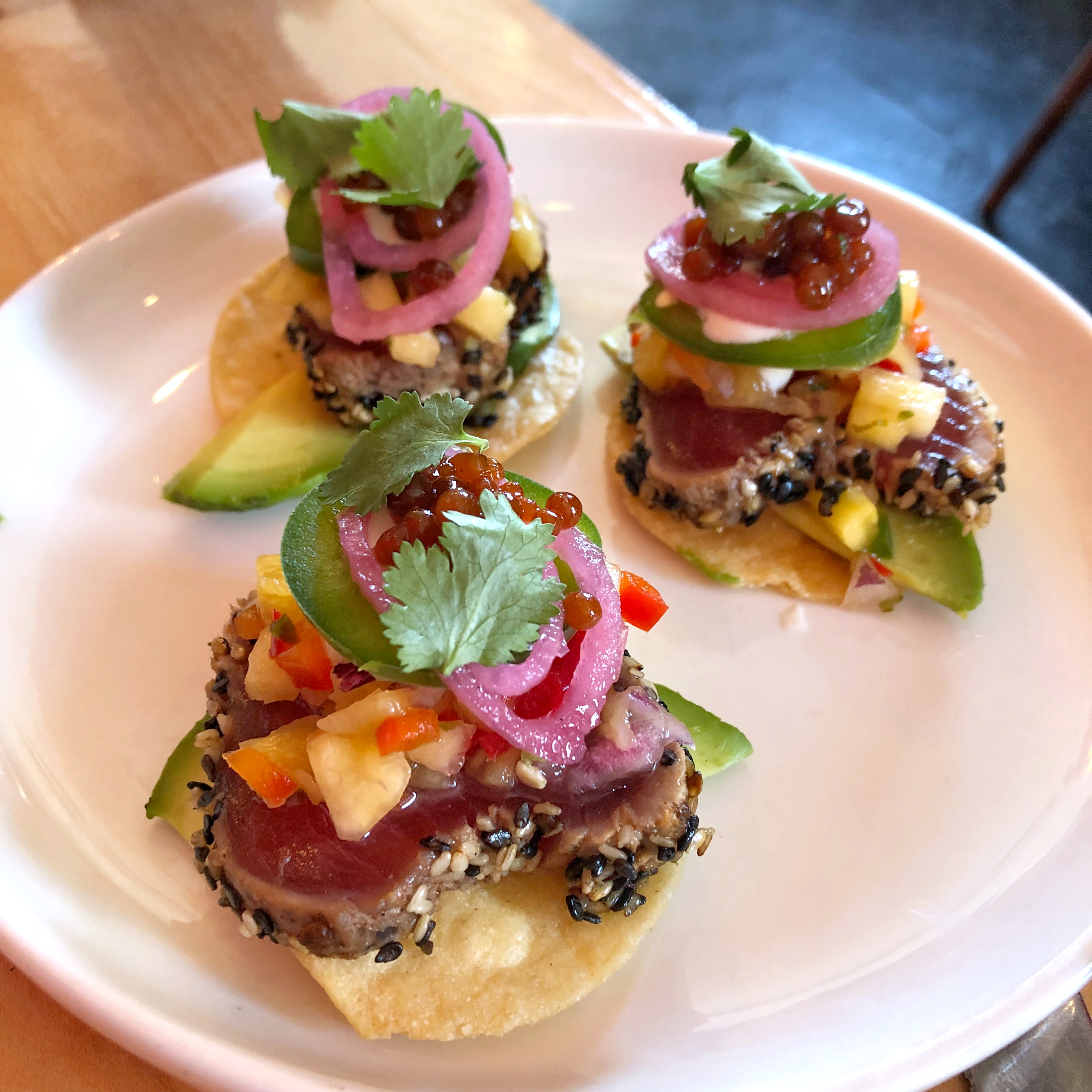 Savorez sits on an unassuming corner in downtown Wilmington, with a nondescript brick exterior belying a casual, bright-red dining room that serves some of the best Latin American food in town. Before opening his own shop, chef, owner, and native son Sam Cahoon cut his teeth at Panamanian-inspired local favorite Ceviche’s (more on that below), and the hotspot’s influence is clear. When we stopped by for lunch, the room was bustling, and though we had to wait a few minutes for a table, it took us longer to decide on our order than it did to be seated. The reasonably priced menu (even at dinner time, nothing goes for more than $20) runs the gamut from tacos and empanadas to vegan chiles rellenos and hearty sancocho, but in keeping with the beachy locale, we stuck with the seafood offerings, and we weren't disappointed. These crispy seared-tuna tostadas ($12) were the standout, their layers of rich ingredients (yuzu aioli, creamy avocado, and fatty, barely cooked fish) offset by lively ones (pineapple salsa, pickled shallots, and fresh jalapeño), with bright pops of sriracha “caviar” adding that extra bit of oomph. At two bites apiece, the portion size might be dainty, but each well-balanced morsel packs a ton of flavor. 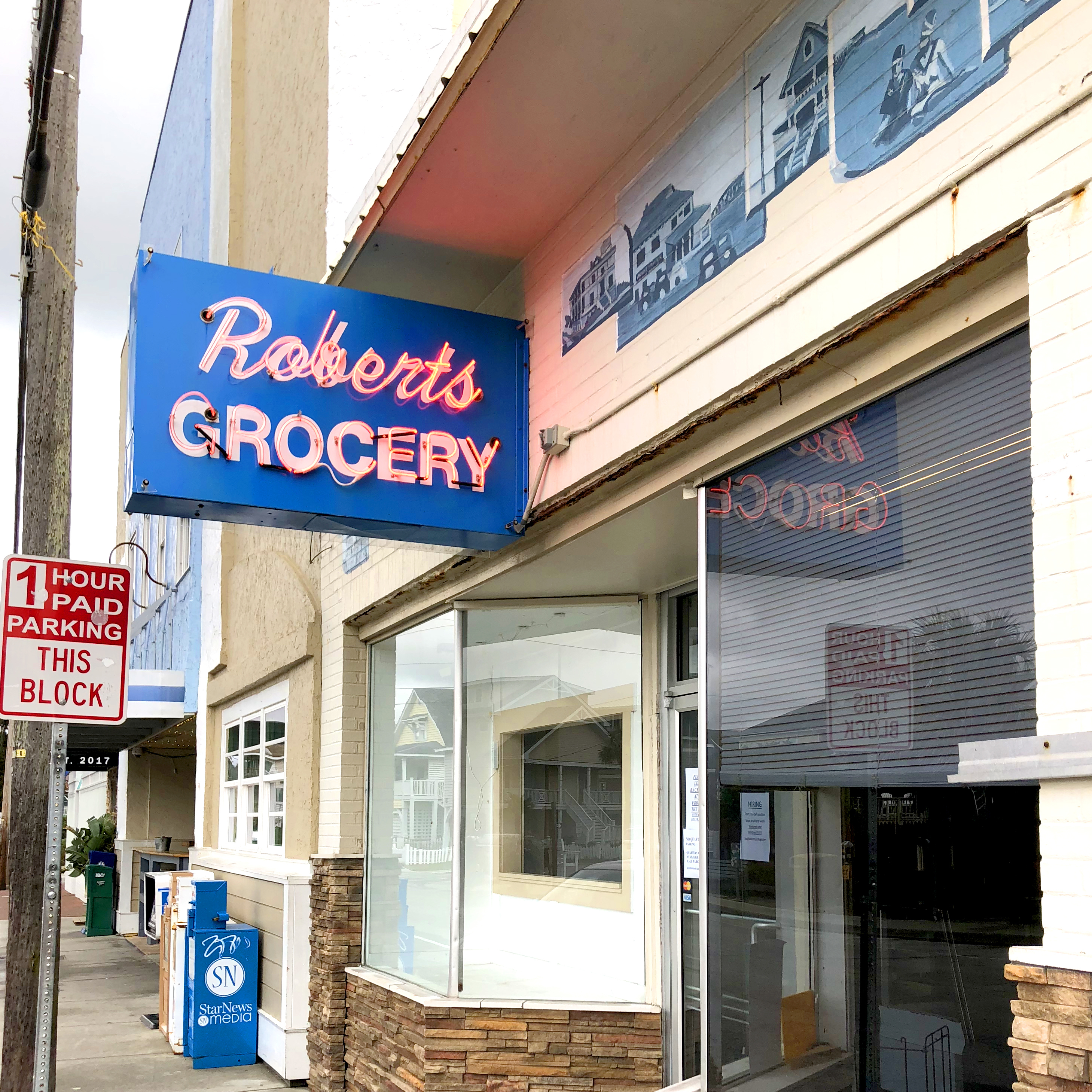 With its 100th birthday fast approaching, Roberts lays claim to the title of oldest store in Wrightsville Beach, but though it may have seniority, this little market isn’t resting on its laurels. It’s best known for picnic fixings like chicken salad, pimiento cheese, and made-in-Wilmington small-batch ice cream sandwiches from Nye’s (nyescreamsandwiches.com), but the fried chicken is the real find here. Seasoned overnight, cooked daily on the premises, and served so hot it’ll singe your fingertips if you try to tear into it too soon, this is the platonic ideal of fried chicken, all crackly skin and juicy, salty meat, best when eaten straight from the wax-paper-lined box. 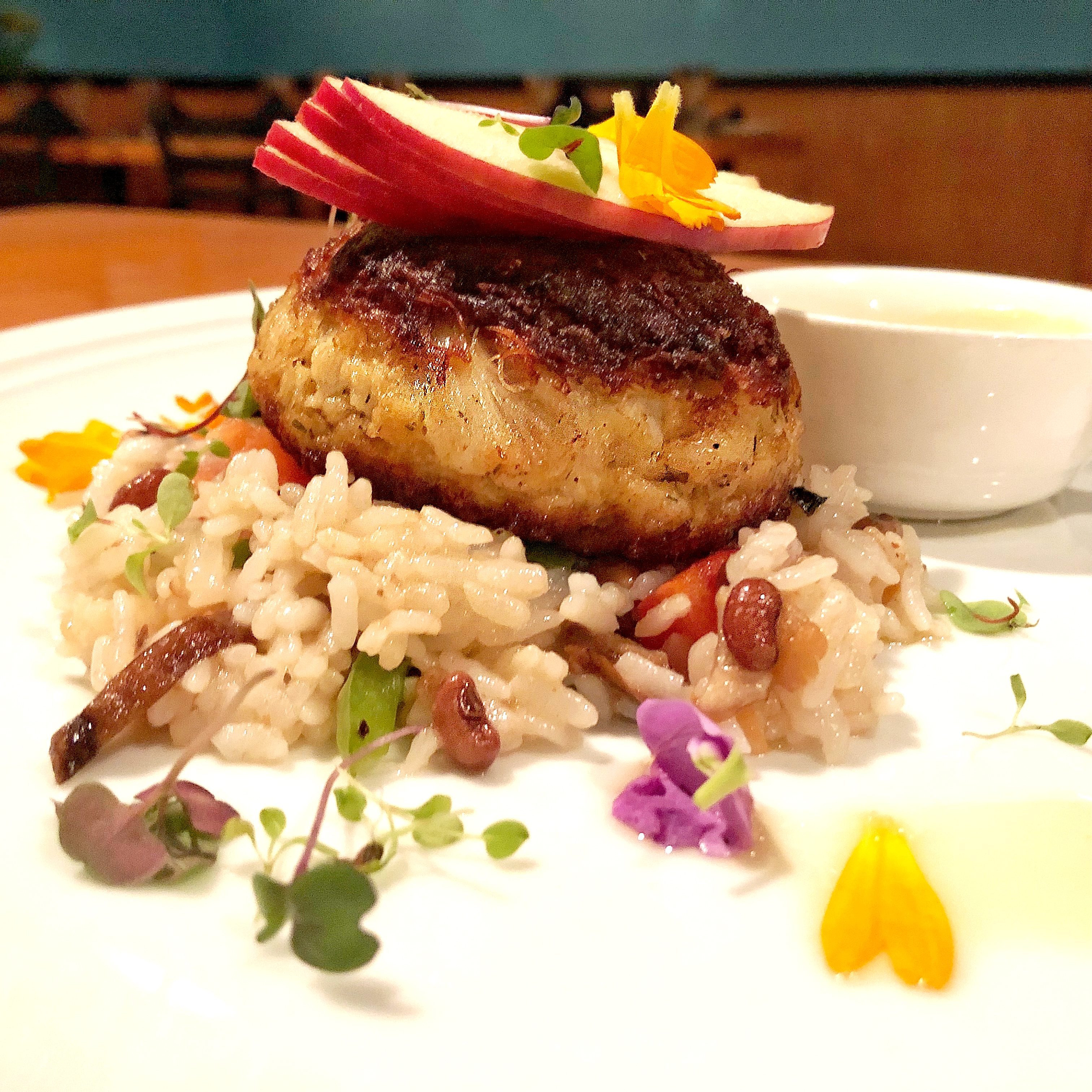 As someone born and raised in the mid-Atlantic, not far from the crustacean-loving state of Maryland, I know what I like in a crab cake. In my (humble, unimpeachable) opinion, the best representatives of the genre go easy on the binding, taking a light hand with the seasonings and any other stuff that might interfere with the sweet, delicate flavor of the crab. Happily for Wilmington residents, the signature version at Catch, a seafood-centric spot tucked away in a strip mall 15 minutes from downtown, does just that. Chef-owner Keith Rhodes serves his lump-meat-filled patty ($16) on a bed of gently scented pirlau (the southern cousin of the staple rice-and-peas dish found in cuisines worldwide, from Persian to Trindadian, under a variety of similar names), adorning it with a shower of edible petals and presenting it with a side of lobster cream so good that I unabashedly finished it off with a spoon. If, somehow, crab cakes aren’t your thing, we also loved the Top Chef alum's take on diver scallops, which, that evening, married the sesame-seeded, brown-crusted mollusks with a spiced sweet-potato puree, briny Prince Edward Island mussels, crisp-tender bok choy, and a fragrant coconut-curry sauce. Be sure to get there early for the best selection; we went on a Saturday night at 8:00 p.m. and just missed the angry-lobster special, but it looked so impressive on its way to the neighbors’ table that it had me planning my next visit, even while the first was still in progress. That's what I’ll be ordering the next time I’m in town. 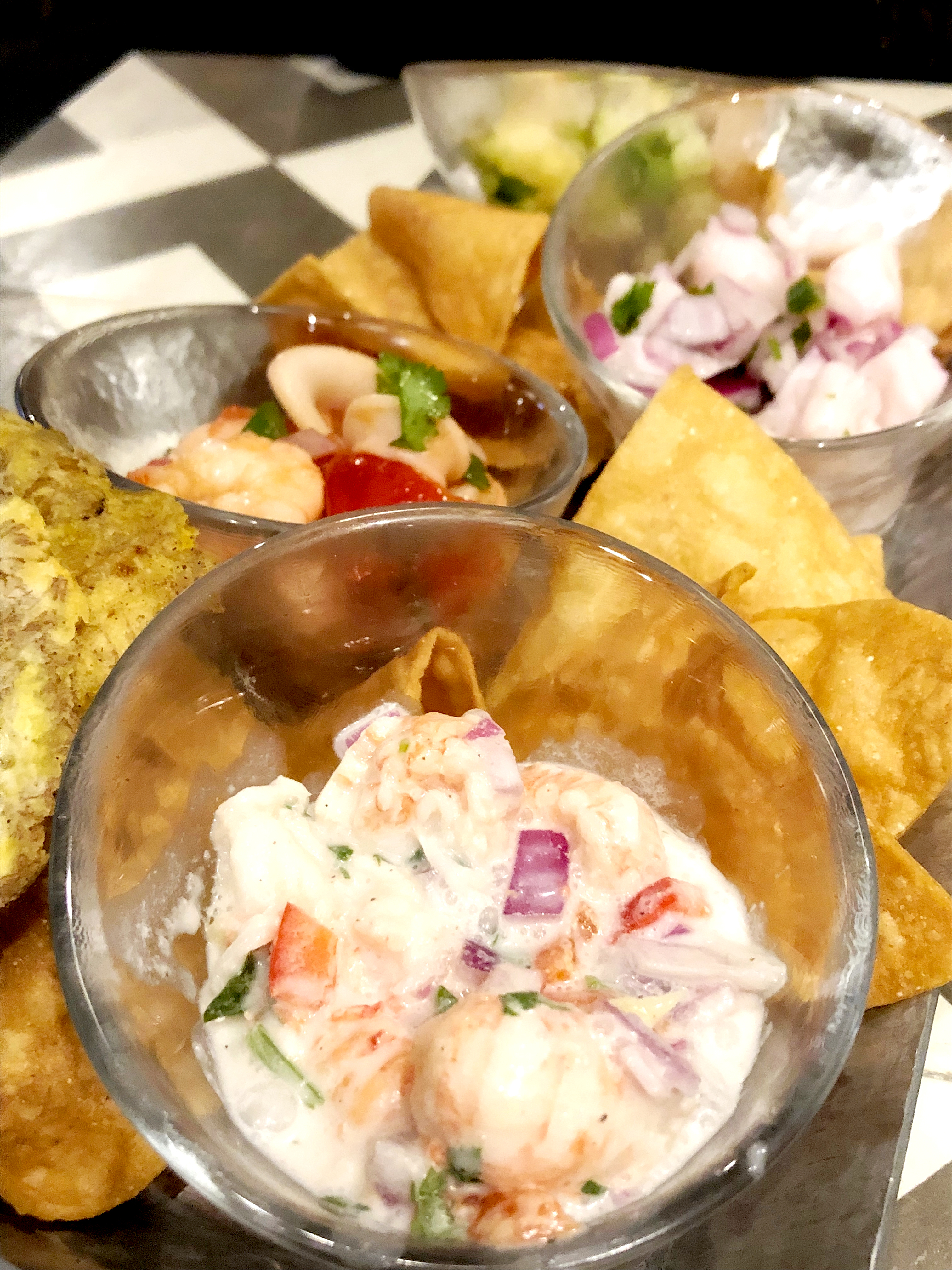 The city's first ceviche restaurant debuted in a former cupcake shop in 2014, but it was met with such a warm welcome that it quickly outgrew its original tiny digs. Two years later, after a remodel, both the food and the space grew more ambitious, with the menu expanding on its much-loved namesake offerings to feature quintessential Latin American plates of ropa vieja and arroz con pollo alongside newfangled dishes like langoustine cakes and mojo-rubbed ribs. But to this day, the selection of citrus-cured raw fish remains irresistible, especially when paired with one of the daily drink specials. Go on a Monday for $6 fresh-lime margaritas, or try the half-priced bottles of wine on a Wednesday, but whatever you do, don’t miss the langoustine de coco ($12), in which chunks of the small lobster’s tail mingle with ginger, onion, red pepper, cilantro, and avocado in a bath of citrus and coconut, or the corvina ($10), in which cubes of sea bass meet a traditional preparation of lime juice, red onion, cilantro, and jalapeño. (You can also opt for a sampler with all four varieties for $24.) Some things are classics for a reason.