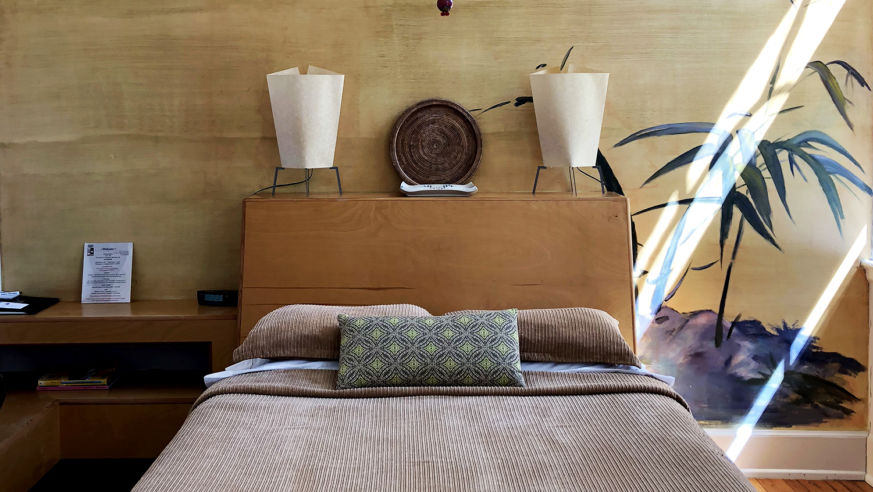 An independently owned inn in downtown Wilmington features themed rooms with quirky appeal for less than $200 a night.

A family-friendly coastal community that's home to both a healthy university crowd and a thriving population of retirees, Wilmington, North Carolina, is a year-round destination, thanks to its temperate climate, proximity to the beach, and wide array of food, drink, and artsy activities on offer. In the heart of downtown, Front Street Inn is a quirky independent property with individually themed rooms, reasonable rates, friendly staff, and a decidedly welcoming approach.

Originally built as a Salvation Army headquarters in 1924, the red-brick building was home to an orphanage, office space, and apartments before it was gutted and converted to an inn in the early ‘90s. The current owners—a couple, married for nearly six decades—felt restless in retirement, first opening a restaurant in Lilliington, a few miles inland, before relocating to the coast and purchasing this property in 2005; their son, a former schoolteacher, manages the day-to-day operations.

The Inn has two floors, and it retains the feel of a bed and breakfast, with first-floor rooms mainly accessed through the Inn itself and rooms on the second accessed via a balcony. (The Taverna suite on the first floor has a private entrance.) Each of its 12 rooms and suites has a different theme, from the nautical touches of the Jacques Cousteau suite to the southwestern-accented Georgia O’Keeffe; amenities vary by room size and location, but all accommodations have free WiFi access, and most have mini-fridges. I stayed in the first-floor Pearl Buck, a sunny, quiet, queen room with 14-foot-high ceilings, tall arched windows, maple flooring, and a selection of the famed writer’s books on the built-in shelf by the headboard, conveniently situated for bedtime reading.

Located smack-dab in the middle of downtown Wilmington, just a 20-minute drive to Wrightsville Beach, Front Street Inn is spitting distance from the area’s restaurants, bars, breweries, galleries, and museums, close to draws like the Riverwalk, a collection of shops and restaurants set on nearly two miles of boardwalk overlooking the Cape Fear River, and historic homes like the Bellamy Mansion (bellamymansion.org), the Burgwin-Wright House and Gardens (bwhg.memberclicks.net), and the Latimer House (latimerhouse.org), which are open for tours and offer an idea of what life was like for rich folks in the days before modern conveniences. (Set on the site of the former city jail, the Burgwin-Wright also incorporates an overview of how things were for the less fortunate, in the days before habeas corpus—i.e., not great.) It’s around the corner from the Children’s Museum (playwilmington.org) and a quick drive from the USS North Carolina (battleshipnc.com), a World War II battleship that saw action in the Pacific and now welcomes visitors for self-guided tours. If you’re looking for a peek at the local arts scene, Wilmington’s Arts Council (artscouncilofwilmington.org) hosts a monthly gallery walk; pop into one of the 20 or so participating venues for wine, snacks, live music, and small talk with the artists themselves. Art is subjective, obviously, but I loved the black-and-white photography, cool collages, and amazing blown glass at Art in Bloom (aibgallery.com).

Front Street has a beautiful kitchen, with a thick-wood-beamed ceiling, blue-and-white tiles, and a vintage, workhorse oven that turns out a daily complimentary breakfast (during my stay, ham-and-cheese quiche, blueberry muffins, and two kinds of pound cake, plus fresh fruit, boiled eggs, and cold cereal) for the inn’s guests.

For the rest of your meals, nearby dining options are bountiful and varied, with joints serving everything from sushi to Southern in divey digs and highbrow environs alike. We splurged on dinner at PinPoint (pinpointrestaurant.com), named to Southern Living’s list of best new restaurants in 2016 and serving coastal cuisine that’s been living up to the billing ever since, with a menu starring meat, produce, and seafood sourced from local farmers and fishermen. For a light lunch or a more substantial meal, Savorez (savorez.com) is a small, colorful corner room with reasonably priced Latin American fare. Snack-wise, Front Street Brewery (frontstreetbrewery.com), offers half-priced appetizers from 4-6pm daily; pair a pile of light, crispy onion rings with a five-beer tasting, and you'll be more than sated.

There’s a small lot adjacent to the inn, and parking is free for one car per room. One room can accommodate a dog, but just one dog at a time, and it must weigh less than 40 pounds. Rates include breakfast and WiFi access.