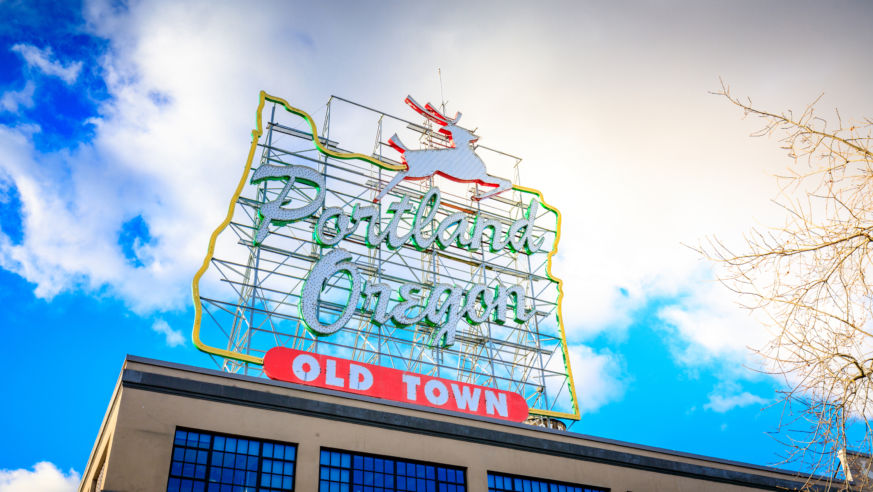 The gem of the Pacific Northwest, Portland beckons with excellent food and drink, creative businesses, and exquisite natural landscapes.

Portland is at once small town and urban center, rugged yet elegant, zany yet sincere. It blends self-awareness and entrepreneurial grit with a happy-go-lucky sense of fun. Oregon’s biggest small city (the population is under 65,000) has become a focal point in past years for its culinary scene, its vibrant makers’ community, and its quick growth as a city. It often gets high ratings when it comes to quality of life, thanks in no small part to its incredible dining, its many bike paths, and its proximity to gorgeous outdoor landscapes. You could dedicate a week to just eating or just drinking or just hiking and biking, but if you want to get a taste of it all, here are a few ideas for how to navigate this bastion of Pacific Northwest cool. 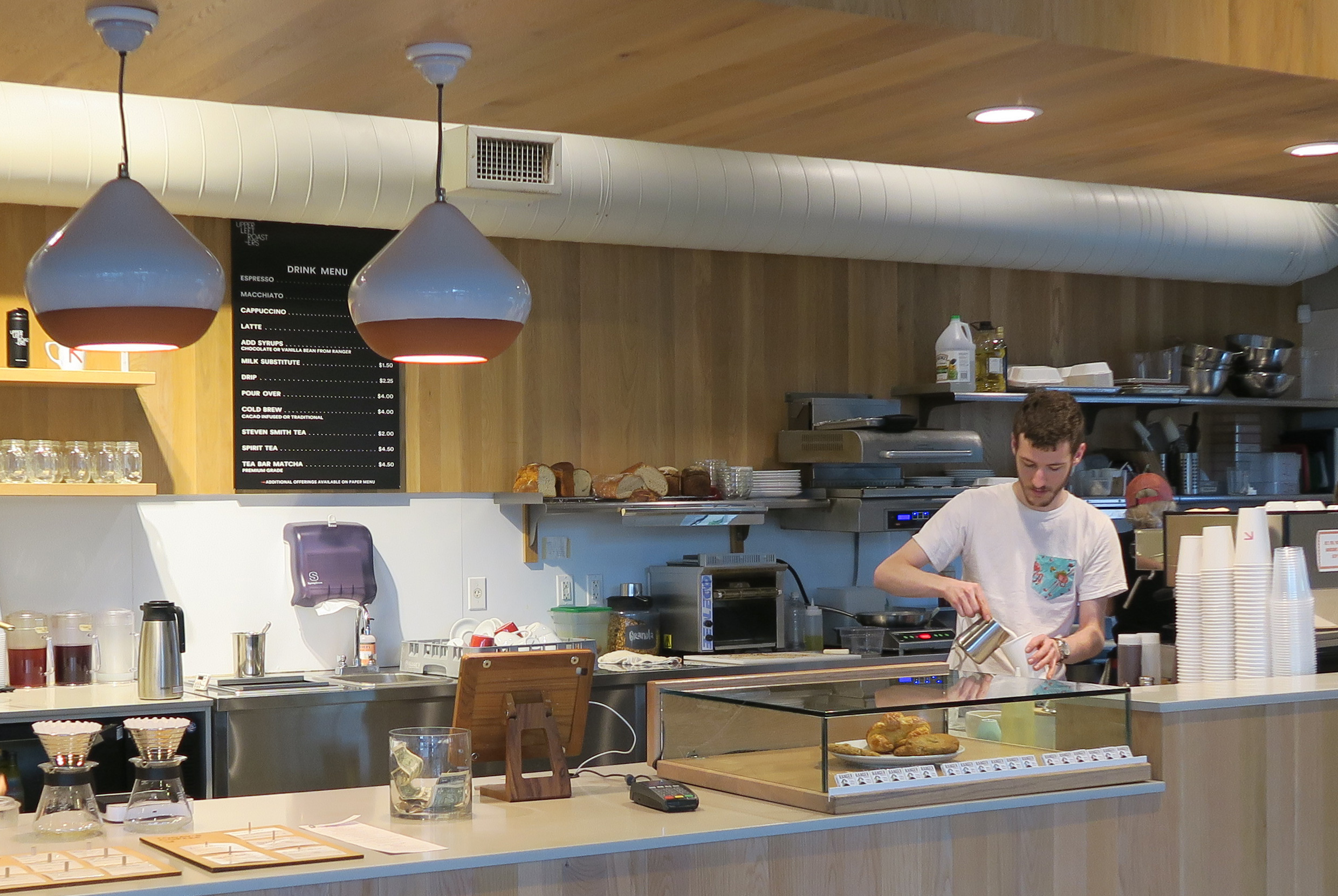 Seattle has Starbucks, San Francisco has Blue Bottle, and Portland has Stumptown—and, well, everything else. (Little-known fact: Portland was home to the first Starbucks outside Seattle, which opened in 1989.) It’s estimated that Portlandians individually consume 26 pounds of coffee annually and there are more than 60 people or companies roasting coffee within the city limits. And that’s to say nothing of the beans' journey to get to Oregon. Lora Woodruff, founder and tour guide of Third Wave Coffee Tours (thirdwavecoffeetours.com), says that coffee goes through up to 15 sets of hands before it arrives in your cup. That’s just one of the incredible facts I learned on her tour, which hits five coffee houses and roasters over three caffeine-fueled hours. The morning is a triple-shot dose of coffee knowledge: Lora and the baristas and roasters along the way go through the basics of Fair Trade sourcing, the different qualities that various growth elevations impart on the beans, the physics of the pour-over, the chemistry of roasting, what it takes to be a competition-winning barista, and the steps a coffee judge takes to hone her palate. Between that, a workshop in cupping (the professional method for tasting coffee), and the many samples at every stop, the tour is eye-opening in all sorts of ways.

Around the mid-1980s, before every bar and restaurant boasted of having “craft beer” on tap and the term wasn't as common as “sparkling wine” or “London dry gin,” Portland wasn’t simply a city with lots of breweries making beers on a small scale. It was building the groundwork for the craft-beer movement, which only seems to gain momentum as the years go by. Back when most Americans were knocking back Miller Lite and Budweiser, creative brewers in Oregon knew there was much more to beer than watery lagers. Many call 1984 the starting point. That's when BridgePort Brewing started cooking up uncommon beers, and its IPA remains a staple around the city. Widmer Brothers followed fast on its heels, making its name with its Hefeweizen, still an essential on many local taps. Both have come a long way, and visits to their breweries offer more experimental brews that show it. McMenamins is further proof that Portland is ground zero for the craft-beer movement. Since opening its first brewpub in 1985, the company has expanded to more than 65 locations around Oregon and Washington, each of which dispenses longtime cult favorites alongside one-off special releases. With dozens of breweries within the city limits—and that’s to say nothing of beer bars—you could easily spend a week here just on a beer crawl. Locals know this, so some have started companies to help navigate the scene—and the vocabulary. With more breweries continually cropping up, beer-makers are increasingly trying new styles to differentiate themselves, so brewery or pub visits will give you options like Bavarian helles (check out the ones from Wayfinder Beer) and hazy IPAs from Great Notion Brewing. If you’re one of the increasing number of beer drinkers who’s found a new calling with sour beers, Cascade Brew House is your Shangri-La. Just look out for the ones the bartenders describes as "jaw-rattling."

3. Scary Fun at the Peculiarium

Upon arriving at the Freakybuttrue Peculiarium and Museum (peculiarium.com), a modest storefront on a quiet Nob Hill street lined with nondescript shops, a large beer store/bar, and triple-story homes, I realized that the most peculiar thing about it is how few locals seem to know it exists. On my walk over, I asked directions a few times and got blank stares in return. One bearded young man thought it was a beer bar he hadn’t heard of. This is particularly astonishing given that creepy set pieces—an old man slouched over in a wheelchair, a zombie of some sort—greet you on the sidewalk. The compact museum is a repository of bizarre, hair-raising stuff including, but not limited to a towering life-size Big Foot, all sorts of ghastly monsters (and yes, you can even sit on a lap or two for a photo), a grisly interactive alien heist scene, and the most elaborate, epic, blood-splattered mini crime scene you’d ever imagine could fit inside in a dollhouse. There are also original character models and assorted props from classic horror films. The stuffed-to-the-brim museum features everything a freak-show fanatic needs to enhance their collection of bizarre bric-a-brac: insect candies, macabre oil paintings and other artwork, comic books, and plenty more, including pieces from an artist and special-effects pro who worked on Mars Attacks and other Tim Burton flicks. Admission is free, but it might cost you a few nights of restful sleep.

4. Take a Tranquil Walk in the Japanese Garden 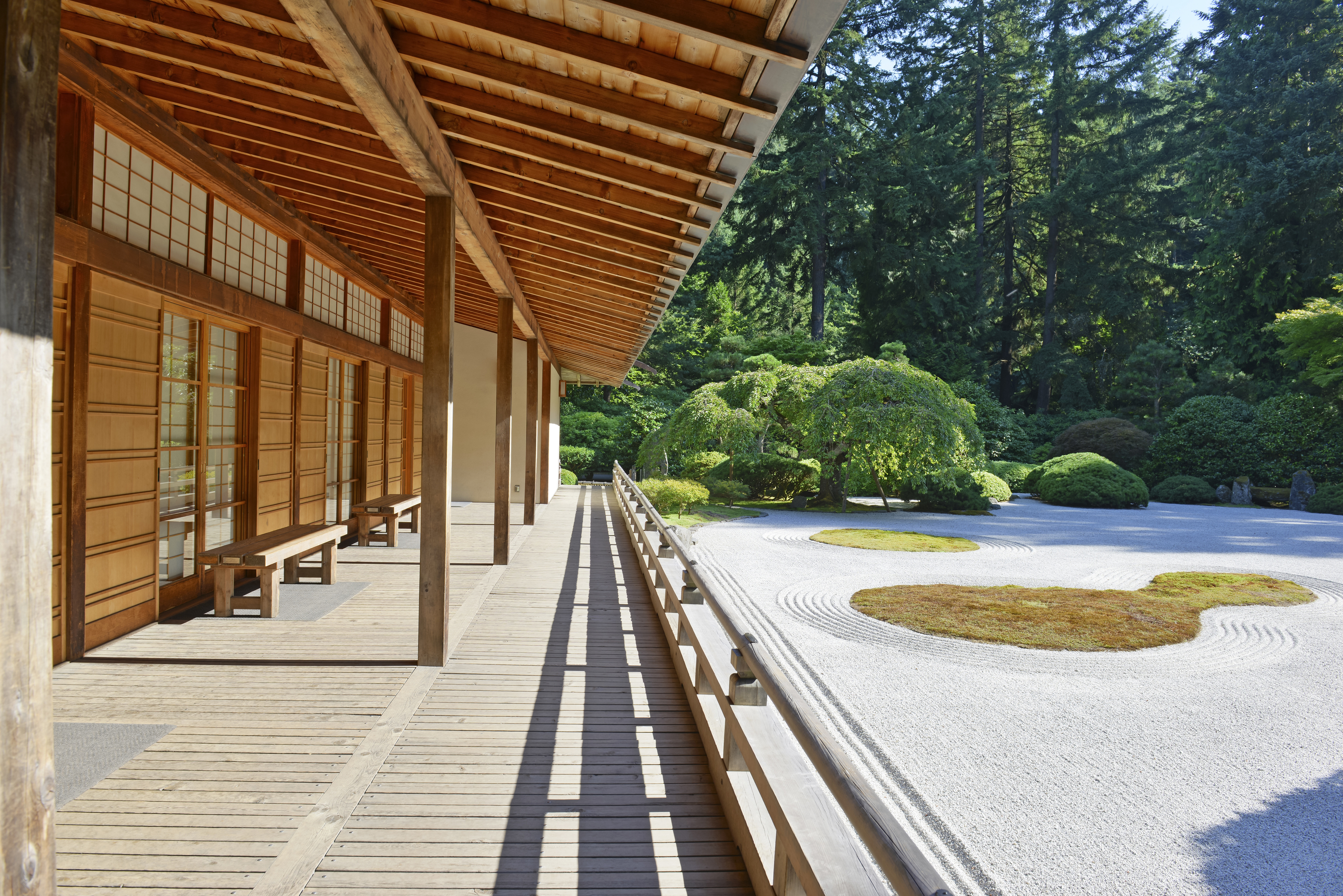 Spread out over 12.4 acres, the Portland Japanese Garden (japanesegarden.org) is said to be the most authentic outside of Japan, and it's a marvel for many reasons, the fact that it's made up of five distinct garden styles not least among them. You could easily spend hours moseying about the flat garden, the strolling garden pond, the tea garden, the natural garden, and the sand and stone garden. Each area is distinct and a work of art in its own right. More than just landscape design, each garden has a sculptural element to it. (Tours are available year-round, but it’s recommended to check the schedule before you visit, as they’re subject to volunteers' availability.) Away from the rush of the city, it's easy to get lost gazing at the trees, moss, fountains, bridges, and stone arrangements, but there's actually more to do. Once you’ve hiked up the main hill, there’s a collection of traditional buildings known as the Cultural Village. It’s made up of a cultural center, where demonstrations of traditional Japanese rituals are performed, a gallery that houses shows focused on design, and the Umami Café, which serves small bites and green tea. Try to make a day of it. Rushing through a visit here defeats the whole purpose. I left feeling like I’d just spent hours at a spa. A spa for the soul. 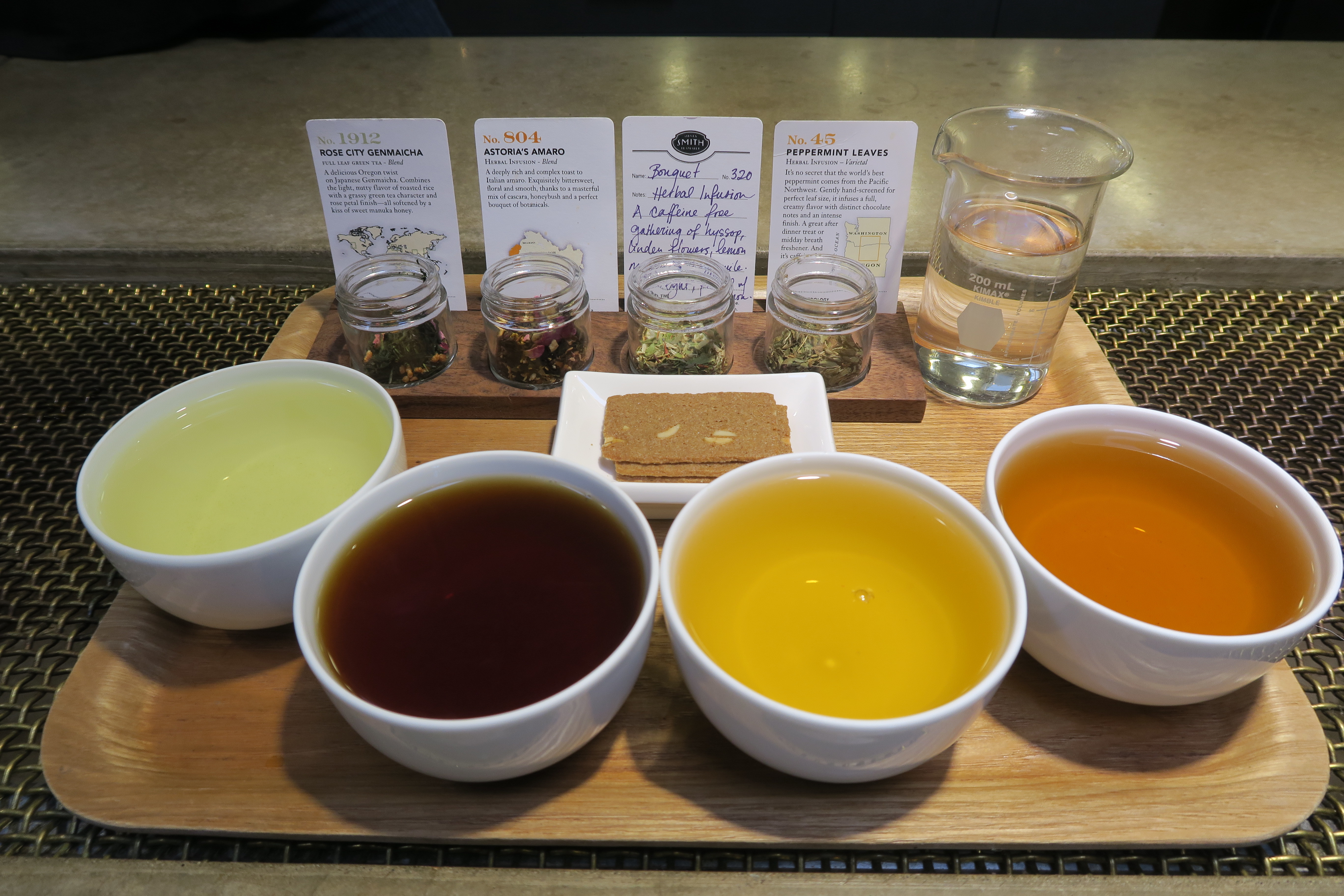 Steven Smith Teamaker's Southeast Tasting Room offers all the company's teas, which is bagged on the premises. (Liza Weisstuch)

There are other ways to enjoy tea after your visit to the Japanese Garden's cafe. The Steven Smith Teamaker Southeast Tasting Room (smithtea.com/pages/locations), which sits on a nondescript stretch of the Central Eastside Industrial District, is also the factory of this locally based tea company. With Persian-style carpets, handsome furniture, and small Asian sculptures spread about, the space is a comfy, easygoing sanctuary in an refurbished industrial building. Sit at the bar, order a sampler, and watch as the various leaves and flowers, which arrive by the sack from far-flung corners of the world, are blended and sealed in teabags. Body, mouthfeel, and acidity are just a few of the qualities that the baristas here encourage you to consider as you taste through their various offerings. They'll explain how the current blender travels the world to inspect the ingredients at the source and why hibiscus is considered the cabernet of tea, amid other neat insider tidbits. They have a retail store, so be sure to stock up. 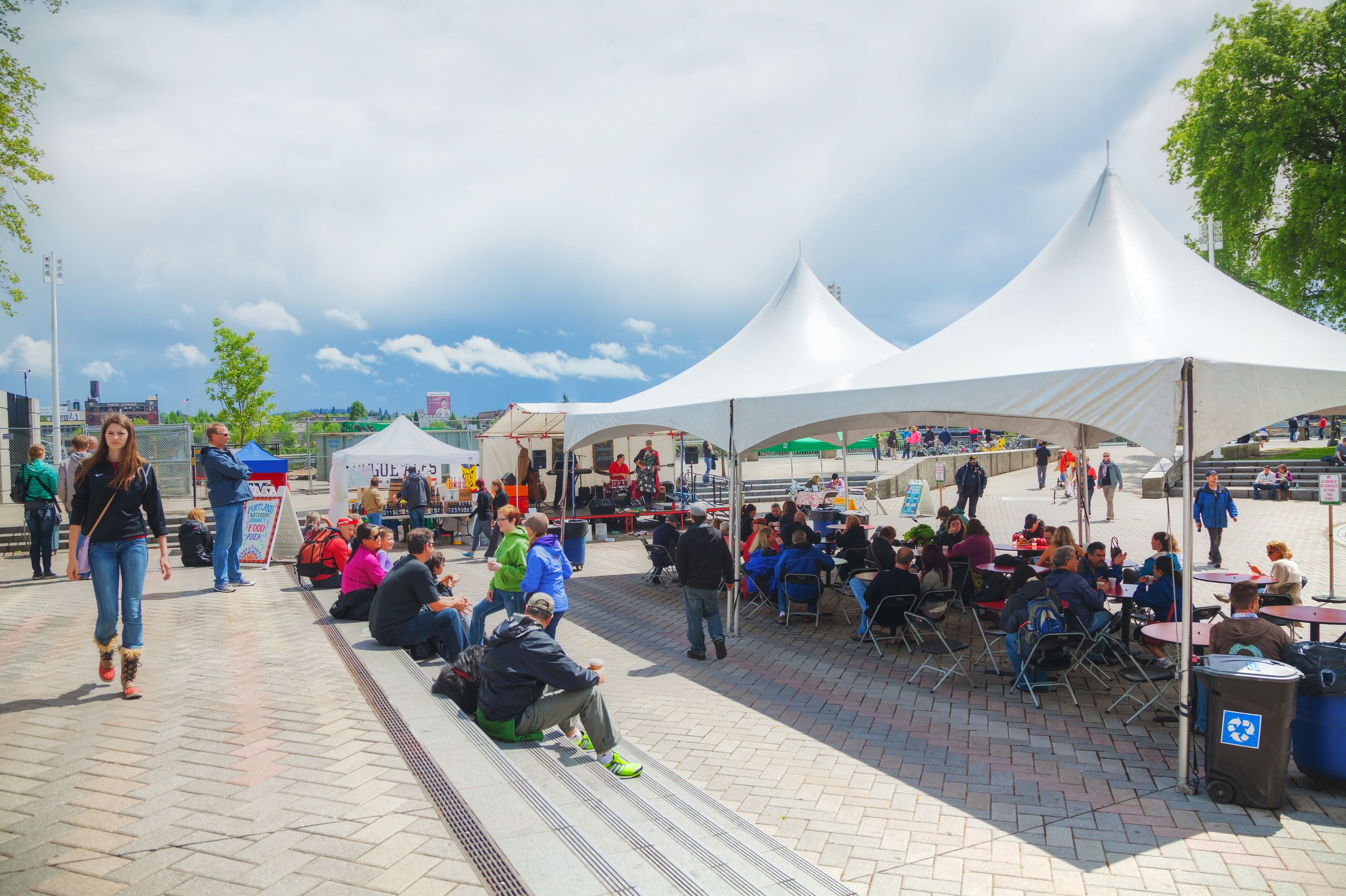 The PSM is the largest continuously operating open-air arts and crafts market in the country. (Andreykr/Dreamstime)

The most important thing to know about the Portland Saturday Market is that as you mosey the labyrinth of stalls that make up the riverside craft bazaar, you need to be on the lookout for the Fun Police. These young men in ludicrously ill-fitting uniforms are armed with brightly colored toy weapons and a ticket pad, and they will write you a citation if they see the slightest bit of boredom or gloom in your expression. Also, they will also happily pose for a selfie if you ask them. Thing is, it’s hard to be bummed out when you’re surrounded by all manner of beautiful hand-crafted art, edibles, and curios; plus, the variety of food stands and engaging street performers do their part in keeping the mood up. Started in 1973 and laying claim to the title of largest continuously operating open-air arts and crafts market in the United States, the PSM is open on Saturdays and Sundays (despite its name) from March through Christmas Eve. The locally crafted wares run a dazzling gamut: baked goods, elegant handmade instruments, micro-batch cider and beer, fragrant soap, delicate pottery, intricate illustrations, clothing, jewelry, bags, belts, wraps, and more clothing and more jewelry. I made off with a paneled wraparound skirt made by a women who uses all “upcycled” fabric, a colorful, playful cape for my niece, and macaroons. I was particularly enchanted with a reserved vendor who goes by Spoonman, presiding over a wide selection of jewelry, kitchenware, clocks, and more, made of stainless-steel flatware. He was nonchalantly wearing a headband that made it look as though an ax went in one side of his skull and out the other, and offered many other versions (cleaver, scissors, arrow) as part of his inventory—perhaps typifying Portland’s “weird” factor at its most glorious.