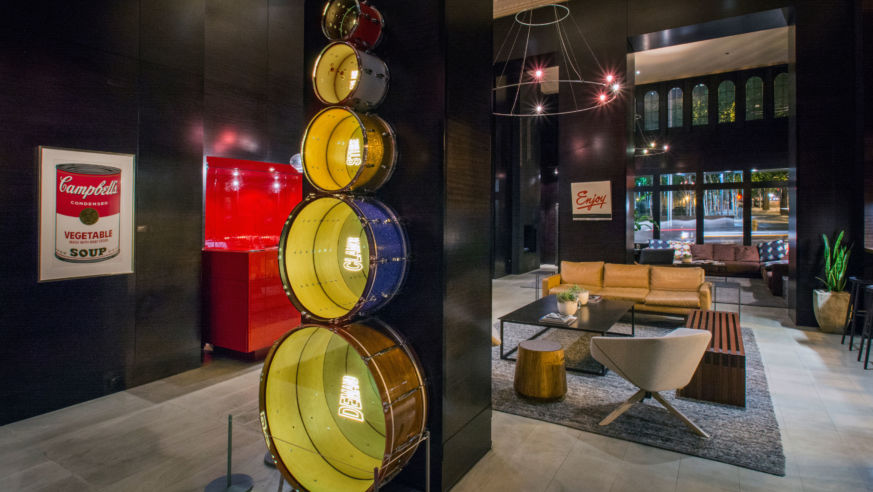 From the art to the food to the all-around vibe, this downtown hotel showcases the stuff that Seattle dreams are made of.

Seattle was established as a city in 1851, yet chances are that when its history is written in 50 years, the most memorable chapter will be about when Howard Schultz opened his little coffee shop in Pike’s Place Market in 1971 and called it Starbucks. Or it will be about the 1990s when Seattle served as ground zero for the grunge music that defined Gen X. It’s the latter that takes center stage at Hotel Max, a creative downtown option that’s part boutique hotel and part shrine to the city’s indigenous sound and laidback vibe.

Hotel Max isn’t just in downtown Seattle, it is Seattle. At every turn there is something to remind you where you are, from the signed prototype of the Gibson bass guitar designed by Nirvana’s Krist Novoselic perched in the spacious lobby to local craft beer at the bar and served during happy hour to the 350-plus paintings and photos by area artists on display throughout the ten-floor hotel. Among that collection of photos are the images on the exterior of each room’s door. Each floor is dedicated to a single photographer’s work and perhaps the most notable of all is the collection of Charles Peterson’s shots on the fifth floor. Known for documenting legends, the photos here include dramatic concert shots of Nirvana, Pearl Jam, and more. But that’s only the start of the fifth floor’s story. Seattle’s seminal music label Sub Pop Records celebrated its 25th anniversary in 2013 and for the occasion, the hotel transformed the rooms on the floor as a tribute to them. Each room is now equipped with a record player and vinyl collection, a bathrobe styled as a grey hoodie, and cheeky references to the bands, like the do-not-disturb door tag that reads “Nevermind” and the hair dryer stored in a cloth bag labeled “Blow.”

There are five different size options among the 163 spacious rooms, from minimalist option with a full-size bed to four increasingly bigger sizes, including one with a king-size bed and separate sitting space. They’re all designed in a neutral grey palate with pops of bright color throughout--the pillows, the throws, the bathroom walls--that evoke 1960s design. Local pride rings through in the exclusive Sub Pop television channel, which broadcasts the label’s current and vintage videos, and a mini fridge stocked with spirits made at the nearby Sun Liquor Distillery. Each room features a flat-screen TV, free Wi-Fi, and, like its sister property in Portland, Oregon, Hotel deLuxe, a clever “You Got It” button on the phone that connects you to the front desk for all requests—even whimsical ones, within reason.

The hotel sits smack in the middle of downtown Seattle, a notably walkable city. An array of local restaurants as well as familiar retailers—Nordstrom, Macy's, H&M—are located within blocks. It takes 15 minutes or less to walk to the famed Pike Place Market or the hip enclave of Belltown, and a little more than that to reach Capital Hill, a popular tourist destination for coffee-loving visitors, as it's home to the sweeping Starbucks Roastery, a veritable carnival of a coffee house with a food court–like setup and a huge roaster that attracts a picture-snapping crowd every few hours when it motors up. There's even a bar. Should you feel like venturing out to the beach or opt for public transportation to and from the airport, the hotel is a few blocks away from a Link light-rail station.

A nine-foot-long custom-built, brass-accented grill anchors Miller’s Guild, the hotel’s restaurant that’s retrofitted into a space originally built in 1925 to house workers and craftspeople who worked at the Vance Lumber Company. Helmed by James Beard Award-winning chef Jason Wilson, the emphasis here is on local and nose-to-tail butchering of heritage breed livestock. The butcher block, in fact, is on full view. The menu features all kinds of wood-fired indulgences, like 75-day dry-aged beef, straight off the flames of the showcase grill. The drink list is just as engaging, with an extensive selection of local spirits and beer as well as cocktails aged in barrels perched behind the bar. A full breakfast menu is served here, too. There's also free locally roast coffee each morning in the lobby.

Two words: Happy hour. Each day between 5:30 p.m. and 6:30 p.m., guests are treated to complimentary pints of local beer in the window-lined lobby, which is equipped with comfy furniture and board games.

And dog-owners, take note: in accordance with classic Pacific Northwest lifestyle, the hotel is pet-friendly. Amenities for four-legged guests include everything from room service with eco-minded food choices, groomers, veterinarians, and a few more bourgeois services, like pet acupuncture and psychics.