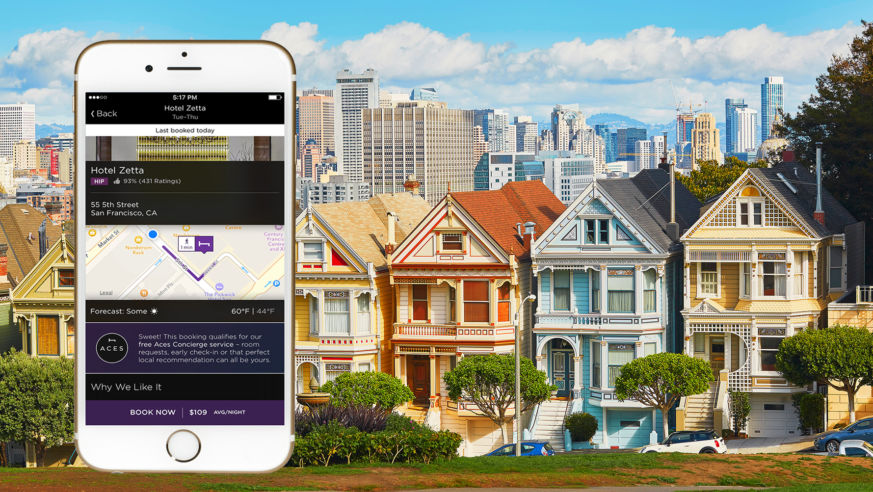 The last-minute hotel-booking app HotelTonight has been a longtime favorite of ours here at BT. The genius is in its simplicity: Wait until 12 p.m. for across-the-board price drops the day you want to book a hotel (or 6 p.m. for deeper discounts), then scoop up deals on properties ranging from "Solid" to "High Roller." (HotelTonight says its prices tend to be 18 percent less than Expedia's or Booking.com's.)

Today, the app is launching a feature called Aces: real-time "digital concierges" that dole out everything from restaurant recommendations to expedited requests for an early check-in. The text message–style interface is so quick—average response time is 23 seconds—and its responses so on point, it's giving us major Scarlett Johansson-in-Her vibes. That's a good thing if you're in a new city or neighborhood trying to juggle tasks on the fly, or if you don't want to awkwardly call down from your hotel room to ask for a shaving razor.

Unlike ScarJo's artificial-intelligence persona, HotelTonight's concierges aren't bots (we asked). Actual humans are answering guests' questions around the clock. Right now, Aces is available when your total booking price is $200 or more (this can translate to $70 per night for three nights, and so on) in 28 U.S. cities, plus a handful in London and elsewhere in North America. List below:

And HT has more money-saving news: The app has been retooled to favor users who are already in a geographic area, rather than those booking from afar. For example: If you're exploring Midtown in New York City, you'll see a green Geo Rate flag for hotels nearby and watch the price drop: While testing out the app, I saw the centrally located boutique hotel the Marcel at Gramercy, which offers free wine tastings and a rooftop terrace, plummet from $305 per night to $170, thanks to my being nearby. If you're trying to book from, say, Dallas, you won't see those deals, HT says.

Call it a homecourt advantage—ideal for adventurous travelers looking to fall in love with an area and experience it like a local.