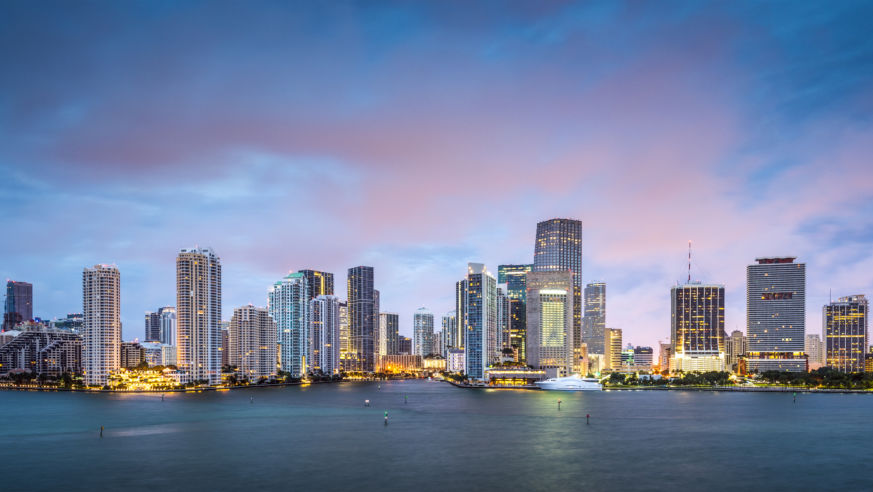 Miami’s reputation for excess is the stuff of hip-hop video fantasy: Parties on yachts with models and oligarch henchmen; bottle service at the latest nightclub next to pro athletes and career scenesters; James Bond-like characters making mojitos at the wet bar in your penthouse suite. In summary: debauched, superficial, and vastly expensive. Or so the stereotype goes.

This is the Miami that was concocted to appeal to people’s most aspirational and competitive fantasies--but it’s not how regular visitors or part-time residents try to live. You can actually have the boat life, nightlife, and even the penthouse views in Miami for a much more reasonable cash outlay. And pro tip: Fantastic restaurants and bars abound in the city, and they’re are rarely ostentatious even if they’re expensive, certain parts of mid-beach and Brickell notwithstanding. Planning an escape to Miami? We’ve rounded up 10 local favorites that offer great value and ambience aplenty.

There are patches of old Wynwood, a mural-splashed urban warehouse neighborhood, left in Miami’s now ultra-gentrified arts district, and The Wynwood Yard (thewynwoodyard.com), an outdoor community bazaar/food truck park/urban garden is the best of them. The grounds are green and abundant with flowers and food plants; the outdoor bar and food vendors serve drinks and eats that are just as quality as what you'd get in any formal indoor establishment. What's more, local organizations and promoters are always running some kind of cool event. Depending on when you visit, you might wander into a yoga class, a crafts market, an entrepreneur networking event, or a free reggae show. On one night that'll go down in the history books, Shakira showed up and played a free midnight show. It was only two songs, but still. Shakira.

Miami does tacos as well as anywhere on the West Coast or Texas, but here, taquerias are not expected to be a humble, hole-in-the-wall experience. Even the cheapest of eats can be served with a little flair. Local favorites, of which Coyo Taco (coyo-taco.com) is right at the top, play to Miami’s fashionable crowds and penchant for day drinking. The Latin Caribbean-influenced menu showcases a fresh approach to fast-casual (the website advertises guacamole “smashed to order”). Toss in ice-cold beer and margaritas and colorful slightly urban décor and it adds up to the perfect dine-in experience at grocery deli prices.

There’s something immediately charming about a Miami brand that gives a shout-out to the belly. Not that the trio of male founders of Pubbelly Noodle Bar (pubbellyboys.com/miami/pubbelly) fit the dad-bod physical profile, but they do have a passion for rich food and friendly hospitality. Chef and founding partner Jose Mendin, a native Puerto Rican with classic culinary school training, began his career with the Nobu restaurant group (first in Miami, and then London). He’s equally talented working with pork – the beloved staple protein of Puerto Rico – as devising colorful, delicious Asian dishes. The cozy, constantly packed noodle bar, located next to Pubbelly Sushi in Miami Beach's Sunset Harbour neighborhood, is the best of both worlds on one umami-rich menu. It isn’t quite cheap eats, but a ramen bowl can serve two.

The marina views of millionaires’ yachts lend Monty's on South Beach (montyssobe.com) a luxe vibe, even though the décor is a step up from picnic tables and there is a family-friendly swimming pool on the main deck. As long as it’s not raining, the large wraparound deck space is normally packed with a happy mix of local professionals, South of Fifth residents, and tourists feeling clever that they found this spot. Stone crab claws—South Florida’s claim to shellfish fame—are a huge draw during Monty’s wildly popular Happy Hour (Monday through Friday from 4PM to 8PM), when they're often only $5 each in season. Happy Hour raw bar specials change, but oysters and jumbo shrimp also make frequent appearances. Well liquor is half off, and beer and wine 30 percent off.

In Louisiana and the Cajun parts of Texas, lagniappe is “a little something extra”—a little gift, a gratuitous favor. And while nothing’s gifted at Lagniappe (lagniappehouse.com), a Bohemian-jazzy backyard bar, gourmands will find many little gifts in the refrigerator case by the back bar counter. Specifically, there are dozens of small plastic-wrapped packages of fine cheese and charcuterie, which mostly cost between $4 and $12. Choose whichever ones look good, hand them over the counter, and the staff will turn them into a bespoke charcuterie platter. Other guests forgo the snacks and just buy a couple bottles of wine to accompany the live music, buzzy vibe, and occasional summer downpour.

The lively happy hour is just one of the many reasons that Shuckers Waterfront Grill (shuckersbarandgrill.com), a sunny, raucous outdoor bar on Biscayne Bay can't keep count on its regulars. (See also: its epic sunset views, its grilled wings, its boat-up dock that accommodates everything from small yachts to rickety two-man rowboats, the sports on TV.) It's also notorious among locals because not very long ago, the entire main deck collapsed and fell into the bay while approximately 100 people were seated on it. Only after spending an evening at Shuckers can you understand why such an event, while it may have been very shocking and very wet for those who experienced, did absolutely nothing to discourage the standing-room-only crowds who show up every night.

With a name like Drunken Dragon (drunkendragon.com) in Miami, there’s no telling what the venue might be. A tattoo parlor with an adjacent liquor store? A geisha drag pop-up? In fact, it’s one of the city’s best Asian fusion restaurants, hidden away behind an anonymous door in a strip mall resembling Ali Baba’s treasure cave decked out in leather club chairs. Sexy-sophisticated décor blends bling (golden strand curtains) with tiki touches with eyebrow-raising art. A limited number of Korean barbecue tables are available, usually after a wait, for those who want to get hands-on with their food. Others order from the small plates, often showing up for the great Happy Hour, which starts at the hour most of the world leaves the office, but Miami-ites leave the beach.

An icon in one of Miami’s classic non-beach neighborhoods, Taurus Beer & Whisk(e)y House (taurusbeerandwhiskey.com) is known by night for its comedy and trivia nights, plus its encyclopedic selection of 100+ whiskeys. The food is basic burger and bar fare, with nightly specials offering prices from last generation ($2 taco Tuesdays, $5 chili dog Thursdays, 15% industry night discount on Sundays and Mondays). Though historically an evening spot, Taurus’s 2016 foray into daytime dining, specifically weekend brunch, was received with great enthusiasm. This is largely due to the $19 bottomless booze option. A bacon rye old-fashioned and an jalapeno bloody mary are among the all-you-can-drink offerings.

Avra Jain, owner/developer of Vagabond Hotel, is the force behind the Upper East Side’s urban revitalization—and definitely one to lead trends, not follow. So it stands to reason that the Vagabond’s retro-sexy-deco-cool restaurant/bar, Vagabond Kitchen (vagabondkitchenandbar.com) is home to all sorts of interesting goings-ons. Whether it’s bottomless Sunday brunch, the launch of a new burlesque cabaret, a DJ on the pool deck late-night, or an impromptu art collaboration with a Miami-based collective, the property regularly partners on creative missions. Its typical vibe is boozy, experimental, and inclusive. Except during normal meal hours, when the staff keeps food as the focus, executing contemporary American fare with TLC.

Most Caribbean restaurants in Miami strive for the bare-bones ambiance of island shacks, better suited to takeout joints than special occasion dining. There are exceptions, the most interesting of which is Ivan's Cookhouse (ivanscookhouse.com), a stylish restaurant that "Chopped" winner Ivan Dorvil opened in 2016. You can really tell why this chef did so well on the cooking show: he never puts his restaurant on autopilot. He's constantly changing up the menu, creating specials, or hosting live bands. He even decided recently to open for breakfast during the week. His menu is as Asian and European as it is Caribbean, but all the island staples are represented somewhere. Jerk chicken, fresh-caught fish, Haitian-style oxtails, plantains and fritters are among the top items, and his sampler platter is popular with people who want to sample several Caribbean flavors.