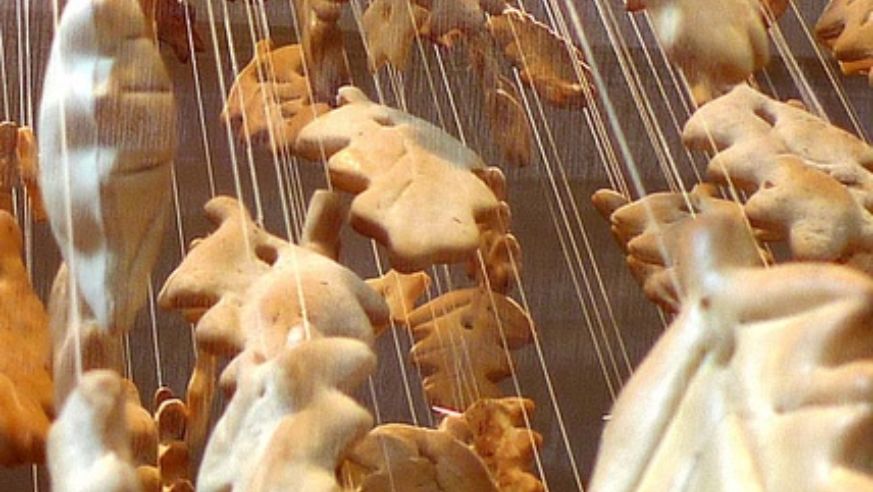 It's especially difficult now to find treats in Paris because of the weakened buying power of the dollar in France.

So I've assembled an Edible Advent Calendar. As with the paper versions that I loved opening as a child, this calendar will reveal a new treat on every morning leading up to Christmas day. Each surprise will showcase the best of the city for less than €10.

The first sight of these golden treats, falling like snow in the shop window at Poilâne, took my breath away. The shortbread cookies from this legendary baker are a local favorite year-round, but in December they perform double duty as dazzling Christmas tree decoration. The melting butter cookies are punched with a hole so that they can be hung (until you're hungry) from the sapin de Noël. A single bag with about 15 ornaments is €4.20 ($6). I can't imagine anything better than gathering around a twinkling tree, sharing some egg nog or vin chaud, and pulling snacks from the nearby branches. Merry Christmas!

The eastern region of Alsace, which has at different times belonged to Germany and to France, has a culinary tradition unlike that of any other French region. These little cookies—called Bredela—are a cheerful part of the holiday season. Flavored with citrus, spice, and plenty of butter, they're perfect with a steaming beverage on a cold December day. This assortment for €8.50 ($12.20) comes from Le Garde Manger, an adorable Alsatian shop near the marché d'Aligre. Also amazing: their hot flammekueche (savory tart with smoked bacon, onions and cream) for €5 ($7.17).

The bûche de Noël is a curious tradition—a cake that's decorated to look like undergrowth. They appear every Christmas, and Parisian pâtissiers try to out-do one another by devising the most artistic log of the season. Rather than the half-sawed cake from Pierre Hermé or the "Diva" ballgown log from Dalloyau, I'm a fan of the kitschy confections that come with fork-drawn bark, marzipan mushrooms and powdered sugar snow. These miniature versions here come from Stohrer, a bakery that's been operating on the market street of Montorgeuil since 1730. It's a classic institution, and a great place to buy this classic holiday dessert for €4.80 ($6.85).

Excluding chocolates that are dusted with gold (such things exist), these little chestnuts may be the most expensive candy in Paris. That's because a single marron glacée (candied chestnut) takes three days to make, with most of the twenty production steps being done by hand. The resulting bite is rich but not cloyingly sweet, with a soft pasty texture not found anywhere else. They're traditionally consumed at Christmas and difficult to find outside of the holiday season. These particular marrons come from Dalloyau, the venerable traiteur that's been catering to aristocracy since the days of Napoleon. You can get a taste of this luxe holiday tradition by popping a single candy for €3. Because they're so rich, one is more than enough.

Oysters on the half shell

As we told you about in this earlier post, Parisians love to get together during the cold months over a plate of raw oysters. During the Christmas and New Year holidays (right now!), the oysters appear on celebratory menus alongside foie gras, sea scallops, and other delicacies. But the most jovial place to toss back an oyster isn't a fancy restaurant—it's a bustling wine bar in the Aligre neighborhood. The Baron Rouge is positively hopping on Saturday and Sunday mornings when the oyster man from Arcachon sets up service on the sidewalk outside the bar. Order a glass of crisp white Muscadet inside for €2.30 ($3.30) then head outside to choose your oysters. With bread and lemon accompaniments, a half-dozen on the half-shell will run between €5.50-9 ($7.90-12.90). If you can't find a table inside, join the crowd on the sidewalk who happily balancing their bi-valves on stacks of crates, parked cars, and every other available surface.

The photoblog of our expat correspondent in Paris