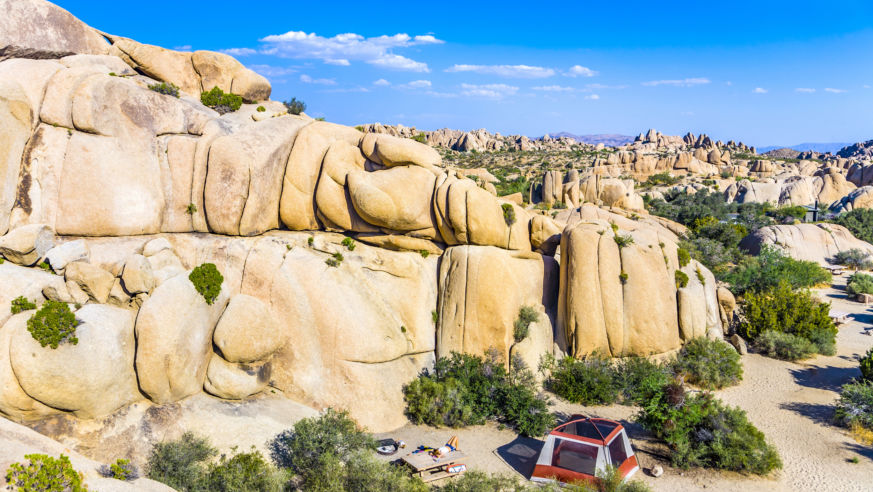 A road trip through California's national parks with an infant is a lesson in parenting. And life.

From miles of sand in the south to rocky coastal cliffs in the north, from the highest point in the continental United States to the lowest point in North America, California is the go-to place for adventure seekers and laid-back vacationers alike, no matter the season. But it was the wintertime that called me, a time when I could indulge my kind of adventure: desert camping. California has three main deserts: the Colorado, The Great Basin, and the Mojave. While winter nights in the desert can certainly be cold and windy, daytime temperatures are perfect for hiking and exploring the varying environments: sand dunes to high mountain peaks; bouldering to hot springs soaking.

Oh, and one more thing you should know: My husband and I went camping in the California desert with our eight-month-old daughter.

THE PLAN: HITTING THE CALIFORNIA ROAD

Seven years ago, I hiked and camped around the US for a couple months with my then fiancé, Will, and one of our stops included Death Valley. It was September and the heat was intense enough to keep us from exploring much. We spent one night in our underwear out under the stars, drinking whiskey and playing card games well into the morning hours. Leaving before the sun was too hot and stopping along the way at Badwater Basin and the Devil’s Golf Course, we vowed to come back in December one year for Will’s birthday. We spent less than 24 hours in Death Valley, and yet it has remained ingrained in our souls; it's a place that inspires and sits with you.

Seven years, a marriage, and a baby, later, I bought us plane tickets on a whim and decided to surprise Will for his birthday. Although he’s an outdoorsy type who loves to travel, I knew that if I presented the idea of this trip, he'd say no and give me a variety of valid reasons. None of them would be enough to sway me. I didn't say a word until two weeks before we left. Excitement got the best of me and I let it slip. And so there we were, with our atlas laid out on the kitchen table, planning the route. We'd spend a night in Vegas, and then make our way to Death Valley. From there, we'd drive to the Mojave National Preserve, Joshua Tree National Park, and finally the Imperial Sand Dunes at the very bottom of California. I found a small start-up company in Las Vegas that rents camping gear, Basecamp Outdoor Gear. We anxiously marked off days, itching to get out there and explore.

On a chilly December night, we met Basecamp’s owners, Joy and Niko, in a parking lot at the Excalibur. They brought to us two bins of supplies: a tent, sleeping bags and pads, chairs, a stove, backpacks, and headlamps. We felt adventurous; we imagined ourselves seasoned parents, ready to take it on. In truth, we had no idea what would happen. Eve, our eight-month-old daughter, slept about an hour in the last 21. She’s used to her nighttime routine: a bath and a massage with oils, followed by stories and rocking and a gentle drift-off into sleep, all beginning promptly at 6PM. She thrives on that routine, yet here we were, meeting strangers in a dark parking garage at 10:30PM local time. Routine? Nope. Winging it? Yep.

After a night of fitful sleep in a hotel that houses a casino full of drunken gamblers, we fueled up and hit the road. First stop: our beloved Death Valley. While Eve slept soundly in her carseat, we entered the park by way of Death Valley Junction, and took our time descending into the valley, stopping to feed Eve with a view of Telescope Peak, which at 11,043 feet is the highest point in Death Valley. We set off exploring until the sun set in rays of pinks and oranges across the valley floor and arrived at our camping spot just as the full moon rose. It was chilly, but we were bundled up and happy. After tucking Eve into her sleeping bag, I joined Will outside and we chatted about how easygoing Eve was just two days in, despite the change in her routine. Things were good.

The wind proved to be unsparing, and we spent that first night shielding Eve from the sand. We awoke with our faces rimmed in dust, our nostrils caked and tongues gritty, but Eve was smiling and unfazed, and so off we set to hike the sand dunes at sunrise. In all, we spent three days exploring and hiking, before taking a slow, meandering route southeast to the Mojave Preserve.

WHAT TO KNOW: Entrance fee to Death Valley is $25. Have a few days? Drive through the park in sections, stopping at every drive and hike available off the main roads. Dante's View is especially exceptional; there's a hiking trail from the parking lot and  unparalleled views of the valley floor 5,475 feet below. There are camping grounds and four lodging options within the park. We stayed at Stovepipe Wells campgrounds ($14) for its proximity to the sand dunes, but there are eight other designated campgrounds.

Driving around this area allows one to fully comprehend the enormity of California. You can drive for hours and nothing changes; the expansive landscape makes you feel small in the way that only nature does and can. When we arrived at the Mojave in the early afternoon, the sun was descending, casting long shadows of the joshua trees, juniper, mesquite and cacti. We camped under a still very full moon and hiked around the Kelso Dunes the next morning. Eve was already a road trip pro. She slept soundly through the night (a first) and was perfectly content on the road, but she was happiest in the carrier, peeking over our shoulders and taking in the desert landscape.

WHAT TO KNOW: Hole in the Wall campground ($12): Bring your own water and be prepared for nighttime wind. Leave time to explore the nearby Kelso Dunes and Kelso Ghost Town. Hikes like Teutonia Peak (elevation 5,754 feet) passes through the world's densest Joshua Tree forest. If you’re just passing through, consider driving the I-15 Scenic Detour, where you’ll pass cinder cones and lava flows on your way to the Kelso Dunes. If you’re staying a few days, there are 13 designated hiking trails to choose from, varying in length and intensity.

We hadn’t given Joshua Tree much thought before our trip, even though we hadn’t been there before. We weren’t planning to stay longer than a day, and we definitely were not prepared for how much we'd both love it. In contrast to Death Valley, the largest national park in the continental US, this park is very manageable. We stayed two days, taking turns carrying Eve on our back while hiking, rock scrambling, and roaming around larger-than-life rock piles scattered throughout the park. Eve continued to be an incredible first-time adventure buddy, even getting excited when we’d pull out the carrier. Planning her naps was easy, as she’d sleep in the carrier or car. Yes, our first road trip may have been simpler without the responsibility of parenting, but the differences in the two trips were actually negligible. My twenty-something self might have been bored at the idea of taking a baby on a road trip, but thirty-something, new-parent me thoroughly enjoyed it.

A sucker for a good ruin, we ventured to the old Ryan ranch and imagined what it must have been like to be a settler. We camped at Jumbo Rocks ($15 per night), adjacent to Skull Rock Trail, an easy loop trail that meanders through boulder canyons and lined with jojoba, mesquite and other hardy desert plants. The trail showcases the geological marvel that is Joshua Tree National Park, a parcel of land two billion years in the making. One night while Eve was sleeping, Will and I scrambled up an enormous boulder that abutted our tent, listening as the moonlit desert came alive.

WHAT TO KNOW: Entrance fee is $25. There are eight campgrounds. Some, like Jumbo Rocks, are first come, first serve. Make sure to check out the Cholla Cactus Garden, an otherworldly gathering of cholla cactus. Joshua Tree has a number of great hikes and bouldering and rock climbing opportunities. Make time to hike Ryan Mountain (elevation 5,457 ft), and if you are strapped on time, venture to the top of Keys View for equally unparalleled views of Coachella Valley and the Santa Rosa mountains.

From Joshua Tree, we meandered down Highway 111, past the Salton Sea and on toward the Imperial Sand Dunes Recreational Area. Hiking in the sand is a good workout; it's akin to moving in deep snow, and after three hours in the car, it felt good to move. At the top of our chosen sand dune, we were rewarded with a spectacular mid-day view: shadowed peaks against bright walls of sand stretched out before us. There were no trees and seemingly no animals. We were alone. Voices became muted, and the sun was unyielding and harsh. It’s an experience hard to come at home in New England, and we relished in it.

WHAT TO KNOW: The Imperial Sand Dunes aren't limited to hikes. There are ATV, dune buggy, and dirt bike rentals in Yuma, Arizona and Ocotillo, California. A number of films were made here, including "The Return of the Jedi," "Jarhead," and "The Men Who Stare at Goats," and it's easy to see why: walking around under the desert sun felt uncannily like a movie set. There are camping areas that are free as part of the Bureau of Land Management (public land). Bring your own water, campgrounds are primitive. There are also multiple campsites on Gecko Road, off of Highway 78.

ON THE ROAD AGAIN, AGAIN

We had planned on staying the night there, but the road trip bug bit us, so we loaded up and turned east toward Arizona. Our previous road trip was life-changing; it set a course of adventure for our relationship. Having a baby with us this go-around was simple, and felt remarkably like it had the first time. Later, when we pulled into the Grand Canyon, I glanced over at Will who was on his phone. He was switching between two browsers, one site for seasonal jobs and the other for used campervans. I smiled; I had kept this trip a secret so he wouldn’t find reasons to say no. Now, here he was actively figuring out how we could make this a lifestyle. The open road does things to you; for Will, it gives him a freedom and happiness he doesn’t feel anywhere else, and Eve’s squeals of delight in the backseat let me know she was happiest out here, too. It’s the same for me. This trip was meant as a birthday surprise, but as road trips usually do, it turned into something more: an affirmation of sorts, on how we wanted to live our lives and raise our daughter. This trip may have been a short ten days, but if our previous experience taught us anything, it will have a lasting impact. Who knows, we just might even find ourselves out here again, indefinitely.