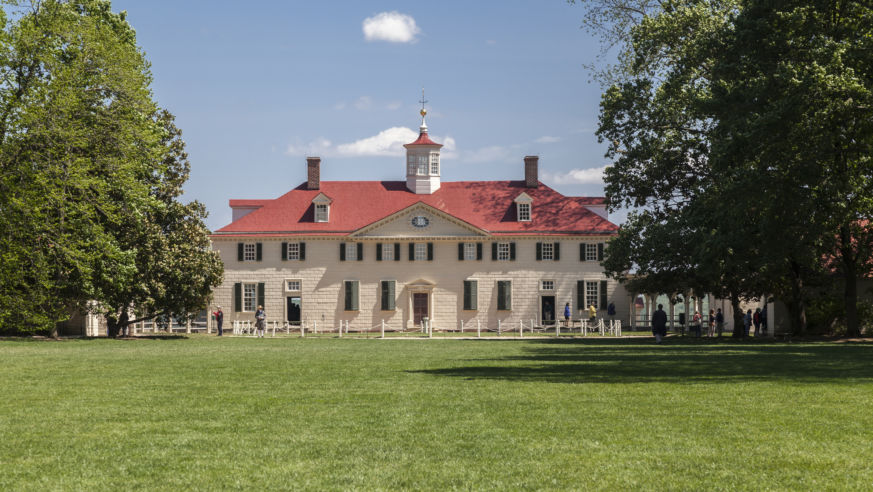 You know George Washington as a founding father and military mastermind. Now get to know him as a distiller.

When you visit Mount Vernon, the estate that George Washington retired to after what you might say was a rich career in politics and the military, you learn many things about his life in retirement, to say nothing of life in Colonial-era Virginia in general. You learn he chose bold color paints for the walls, particularly greens and blues, because it signified his wealth. (As if the sheer size of the place—11,028 square-feet—didn’t signify it enough.) You learn how the staff cooked and smoked meat, how tradesmen like blacksmiths and coopers worked, and the rhyme and reason for the naturalistic landscape design. But you learn most of this from plaques and tour guides.

But things are a bit more hands-on and, let’s call it multi-sensory, three miles from Mount Vernon at the George Washington Distillery and Gristmill. Lest you think there's not be much left for a victorious Revolutionary War general and founder and leader of these United States to achieve, this is where he reinvented himself yet again. Under the watch of James Anderson, his farm manager who’d distilled grain in his native Scotland, George Washington became the nation’s first commercial distiller. As the story goes, the General was hesitant, calling liquor-making “a business I am entirely unacquainted with,” but he was encouraged by Anderson’s credentials and, of course, his financial forecast, noting that considering “the knowledge of [distilling] and the confidence you have in the profit to be derived from the establishment, I am disposed to enter upon one.”

The building, a recreation of the original that burned down in 1814, clocks in at 75 by 30 feet. That’s tiny for a working distillery by today’s standards but in the 18th century, it was the biggest of its kind. There were five stills and he produced 11,000 gallons of spirit—mostly rye, sometimes brandy—in a good year. This undertaking established the Founding Father as a savvy entrepreneur and businessman, a nice addition to the resume of a political and military trailblazer.

The reconstruction, directed by the Distilled Spirits Council of the United States, a trade group, carried a $2.1 million price tag and involved years of archaeological research. The ground was broken in 2001 and the project was completed and opened to the public in 2007, complete with handmade copper pot stills modeled on the 18th-century originals.

And yes, they do make whiskey on the equipment—rye and fruit brandies, just like George Washington made. Re-creating the original recipe was also part of the grand plan. Dave Pickerell, former Master Distiller at Maker’s Mark and longtime consultant to the country's ever-evolving crafts spirits industry, did some sleuthing, digging up historical ledgers and distilling manuals to determine the recipe, or as close as an approximation as one can hope to get.

The functional distillery is a time capsule and tribute to old-world engineering. There was, of course, no electricity to power the machines. Everything is powered by open flame and muscle. In a separate building, the mighty working gristmill grinds the grains as they come in from the farm, just like it did hundreds of years ago. It's a mesmerizing Rube Goldberg-esque contraption and in a neat twist, it's the same milling equipment that received the third patent in the nation. George Washington signed the patent document during his tenure as president.

Actual distilling only takes place a few times a year, but on any given day, you’ll see men and women in colonial garb strolling the grounds. They offer tours that explain every bit of the distillation process. Tours are included in the price of a Mount Vernon admission ticket.