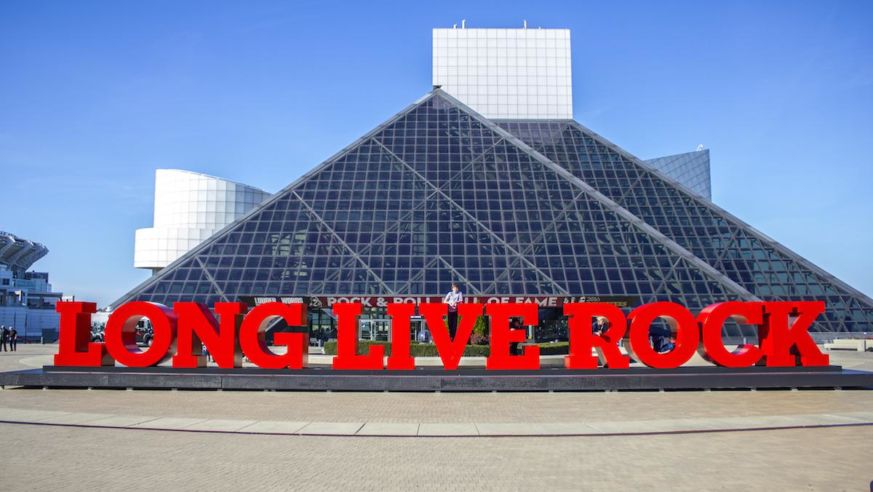 When you think of destinations for music-lovers, Nashville, Detroit, Kansas City, and Austin easily spring to mind. But you’d be remiss if you left Cleveland off that list. Home to the Rock & Roll Hall of Fame, the city, a longtime industrial metropolis that suffered economic decline, devastating pollution, and population flight in the 1970s, is in the throes of a renaissance today. But its old-world character persists. Beyond the roster of tried and true tourist must-sees, like the world-class Cleveland Museum of Art, the shores of Lake Eire and, of course, the house made iconic by “A Christmas Story,” there’s a booming circuit of local restaurants and a vibrant indie arts scene to be explored. We caught up with Greg Harris, President and CEO of the Rock & Roll Hall of Fame, to give us the lowdown on this magnificent city with a resilient rock’n’roll soul.

Cleveland landmarks come in all shapes and sizes and, as it turns out, flavors. Having just celebrated its centennial, West Side Market is arguably something of a food museum, what with its abundance of traditional provisions (think: handmade sausages, cheese, spices and oils) sold alongside countless fruit purveyors and butchers. While locals stock up on groceries, Harris recommends you join the dependably long line for made-to-order crepes.

Cleveland has its fair share of James Beard Award nominees and winners, but it also has a long and solid legacy of old-world ethnic fare, thanks to the many immigrant groups who made their way here when the city was a booming industrial center. In the 1950s, its strong Hungarian and Slovenian populations gave the city Sterle’s Country House, a mecca for Eastern European comfort food. Plus, in a nod to German heritage, polka bands often play. The classic chicken paprikash is Harris’s go-to here. The city’s Polish heritage is on display at Sokolowski’s, which has been family-run since 1923. They offer stuffed cabbage and roster of other standards that, Harris happily notes, you can smell from blocks away.

That Eastern European influence makes its way into the city’s signature barbecue, as evidenced at another one of Harris’s go-to, Mabel’s BBQ, a hip industrial-chic smokehouse with an extensive bourbon list. An old-world pride is also the cornerstone of the local-minded Butcher and Brewery, which Harris recommends for its house-cured meats.

And no visit to a rock’n’roll city would be complete without knocking back a few in a classic dive bar. Cleveland’s most legendary is the Harbor Inn, a local institution that, Harris explains, used to the be gathering spot of merchant seamen. For those with more mondern inclinations, the Velvet Tango Room, a speakeasy-style cocktail den, is a must for craft cocktails.

When the President of the Rock & Roll Hall of Fame endorses a music club, you know it’s gotta be something special. Harris declares Beachland Ballroom “the finest live music venue in the city. I’ll even add in the country.” Its lineup regularly ranges from rockabilly to punk to Americana and plenty more. The club is the anchor of the Waterloo Arts District, where local businesses are open for a street-party-style walk-about the first Friday of each month.

And then, of course, there’s the Hall of Fame, which is more than just a museum. Harris notes is mission: “to engage, teach, and inspire through the power of rock and roll,” and they're tenacious about that commitment. The museum is open 362 days/year and while music history is the spotlight of most exhibits, today’s talent comes to life in the busy concert schedule. They hosted 40 concerts on the pavilion in front of the museum, which was christened with a 80-foot-long “LONG LIVE ROCK” sign, dedicated in November.

Here’s an interesting tidbit: In 2006, Cuyahoga County approved a tax on cigarette that would fund Cuyahoga Arts and Culture, an organization that organizes and funds all sorts of programming for the community. “The county collects cigarette tax greater than most cities’ funding,” Harris notes. “It’s fueled a lot of great artists—large and small—through its various arts programs.” It’s a bit of an incubator for young talent, so make sure to check out what events are on when you’re in town. You never know—maybe someday in the future you can say, “I saw her when…”

Of course, when it comes to art, the Cleveland Museum of Art is a treasure trove of masterpieces, from Edgar Degas to Edward Hopper, but the city’s galleries should not be overlooked. Harris points to the burgeoning scene at Gordon Square Arts District, which was officially established in 2007 by the area’s theater and the local community development organization. Today, 78th Street Studios, which is set in an old automobile parts factory and dubs itself an “eclectic arts maze,” is one of the District’s anchors. On the third Friday of every month, from 5PM to 9PM, all the resident galleries and studios are open, pop-up shops, and food trucks are onsite, and visitors mingle. According to Harris, it’s “uniquely Cleveland.”

In addition to revitalized theaters and an independent movie theater, there’s a broad range of bars and restaurants to choose from. One of Harris’s favorites is Spice, which offers creative updated southern fare made with local ingredients, much of which is grown in the on-site hoop house or the restaurant’s nearby farm. For something a bit more nostalgic, Happy Dog is, first and foremost, “a classic, untouched dive with hot dogs with any toppings,” he explains. It’s also a music venue featuring everything from punk to polka. And if that aforementioned nostalgia is your thing, check out the vintage video games in the basement. It may take you back to your early rock’n’roll memories.

Like so many other cities around the US, Cleveland has seen a remarkable hotel-building boom in the past two years, so much so, that Harris nearly guaratees that savvy travelers can find deals. One particularly cool new spot to check out is the Drury Plaza Hotel, retrofitted into an old Board of Education building. The $52 million project opened in April 2016.

Everywhere you go in the USA these days, you can find local beer. Cleveland’s brewing scene is exceptionally attention-getting, what with several top-rate breweries located in lively areas of the city. Harris calls out Market Garden Brewery, located next to West Side Market. It’s known for its brewpub, which is open until 2.30AM and offers what Harris simply deems “terrific atmosphere.” A 35,000-square-foot production facility, complete with tours and a tasting room, recently opened next door. Harris also gives a nod to Great Lakes Brewing Company, which offers tours Fridays and Saturdays from 12PM to 8PM, and he's looking forward to getting acquainted with the new Platform Beer Company.