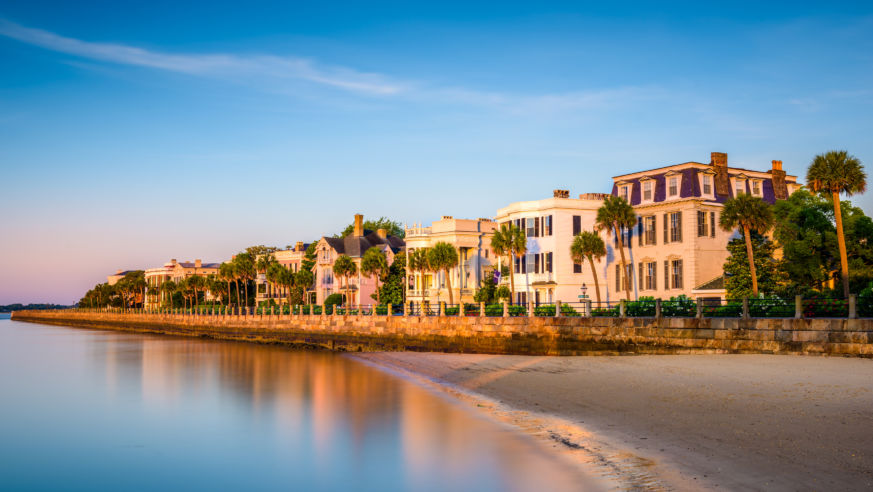 Historic homes on The Battery in Charleston, South Carolina.

There's no better guide to a city than someone who lives there, so we asked principal pops conductor of the Charleston Symphony Orchestra for his take on culture, food, and drink in the town he calls home.

Ten years ago, when Yuriy Bekker moved to Charleston from Brooklyn, he was hit by a bolt of culture shock. But it didn’t take too long for the violinist and principal pops conductor of the Charleston Symphony Orchestra (not to mention artistic director of various music festivals and groups and globe-trotting performer), to realize that although there was more sunshine and tranquility and fewer bagel shops as well as Ukranian restaurants like the ones he grew up frequenting as the son of immigrants from Minsk, Belarus, he could feel quite at home in this jewel of a city, where cosmopolitan energy fuses with a laid-back southern attitude and European charm.

FEED YOUR BODY, FEED YOUR SOUL

The Charleston Symphony Orchestra’s concert hall, Gaillard Center, recently underwent a $140 million renovation. Performances typically start around 7.30PM and he’s usually well on his way home around 9PM. That’s pretty much dinner time, as any New Yorker will tell you. Yuriy prefers not to eat before a performance (even veterans have nerves), so afterwards he heads to 39 Rue de Jean, located just two blocks from the performance hall and known for serving food late-night. The mussels, which are flown in daily from PEI, and French onion soup are his no-fail choices.

Charleston is widely known as a walkable city, so it’s easy to spot new joints that frequently pop up. Mercantile and Mash, a relative newcomer that opened in an old cigar factory, quickly became a regular hangout for him and his wife. The artisanal food market, which includes a saloon-style whiskey and beer bar, is a go-to for the house-smoked meats and a top-notch weekend brunch that’s still undiscovered by the masses. It’s located in an area of the peninsula where there’s a bustlng farmers market known for selling local crafts alongside the produce and other food. It's every Saturday from April through November, One of Yuriy’s habitual stops is Roti Rolls, a food truck that serves Indian-style rotis with local ingredients and clever names. (See: the "Mother Clucker")

Of course, having been in town for a decade now, he’s well versed in the old-school eateries that make Charleston a legendary foodie destination. When it comes to getting his fix of the classic flavor of the South, he hits High Cotton for what he deems the best shrimp and grits in town, though he also sings the praises of Hominy Grill, a much better known tourist draw. There’s often a wait, but it’s worth it, he assures.

A MECCA FOR MUSIC

Visitors to Charleston who love classical music are in for a treat. The symphony has two different programs—a pop series of four annual concerts, each of which delivers orchestral versions of familiar tunes, and Masterworks, which features some of the most iconic pieces of classical music, or as Yuriy explains them, “the true reason for the art form.” The CSO makes it easy for everyone to access this exquisite beauty with the launch of CSOgo, a rather revolutionary and budget-friendly way to see performances. A monthly membership is $35, and it allows you to attend any performance with best day-of seats as well as chances to attend social events, making it an exciting option for wallet-watching travelers who don’t want to commit to buying tickets in advance. That means if you're in town for a few days, you can go to several performances for less than the cost of a week of lattes.

When Yuriy isn’t performing in grand concert halls, you might spot him playing music elsewhere around the city. In a clever partnership with the world-class Gibbes Museum of Art, there’s an ongoing series, Rush Hour Concerts, in which a string quartet from CSO plays music somehow related to the art in a featured show. Culture buffs would be well served to coordinate their visit to the museum with one of these chamber music performances.

Of course, when a musician isn’t performing, there’s a good chance you’ll find him out listening to others perform. He likes to take in the local jazz scene at Charleston Grill, which also happens to be one of the best restaurants in town with a fun bar to go with it.

Speaking of bars, the Rooftop Pavilion Bar in the Market Pavilion Hotel is probably one of the best spots for a late-night outing. From several stories above the street, you can gaze out at the water and city landmarks, even in the winter, when heat lamps keep it cozy and classy. Across the street, is The Watch: Rooftop Kitchen and Spirits, an ultra-hip and more lively and rambuctious rooftop hangout, at The Restoration, a boutique hotel.

MAKE A NIGHT OF IT

Charleston has become an increasingly popular destination over the last few years and as a result, the downtown has a serious hustle and bustle vibe and a parking situation that’s increasingly reminding Yuriy of New York City. John’s Island is a growing community with a great deal of development that makes a fine alternative for a night out, but James Island, located next to it and just seven minutes from downtown Charleston, is where Yuriy and his wife go when they’ve got time to relax. They’ll catch a movie at Terrace Theater, which sells wine and ice cream, before grabbing dinner nearby, either tacos and tortas at Zia or craft beer and modern pub grub (lamb burger, anyone?) at Maybank Public House.

Charleston is as much of destination for nature lovers as it is to city slickers. When he has time to escape for the day, he’ll set off to gorgeous Kiawah Island, a small island with landscapes that vary from woodlands to beaches. Yuriy speaks from experience when he says it’s easy to lose the day here amid the tangle of bike trails. There’s also a multitude of waterways, which is “a world in its own,” he says, so you could rent a kayak and explore for hours. This island has a place of distinction in the annals of American musicals: George Gershwin spent summers and it’s known to be his inspiration for “Porgy and Bess.”

So much of Charleston’s exquisiteness lies in the detail, and the best way to take it all in is on foot. “There’s 18th century architecture but there’s also palm trees. It has a European charm, but you can’t compare it to anyplace else. Maybe the South of France? But it really has its own identity,” Yuriy says, noting the iconic sloped porches with ceilings traditionally painted blue.

He has a route he regularly strolls, one that gives a sweeping, comprehensive lay of the land. It starts at Marion Square, where the giant farmers market takes place. When it’s in season, he has his “eye-opener” roti from Roti Rolls, the aforementioned food truck, and coffee from Charleston Coffee Roasters, a local outfit that sells its brew both in super markets and at a nearby stand, then stroll north to John Street (off King Street) to Macaroon Boutique, which sells what Yuriy declares the best croissants—homemade, of course.

From there, he strolls south down King Street, a boulevard lined with boutique stores, and hang a left on Market Street, an historic strip that's been the site of a market since the early 1800s. Today Charleston City Market is all slow old-world charm (see: people stationed outside making sweetgrass baskets) with a thoroughly hip vibe. Then it’s a right on East Bay, a strip that runs along the water and is home to the sleek Market Pavilion Hotel and the Old Exchange Building as well as historic Rainbow Row, a series of quaint colorful Georgian row houses where fishermen lived in the early 20th century. At the end of East Bay, you end up at the tip of the city’s peninsula where the pretty White Point Garden with views that invite lingering: From the water’s edge you can spot James Island, Mount Pleasant and the historic Fort Sumter, where the Civil War started, in between.

That course lets you see lots of the city’s greatest architectural hits, including many historic churches, but Charleston is a city where there are tons of surprises around every corner.