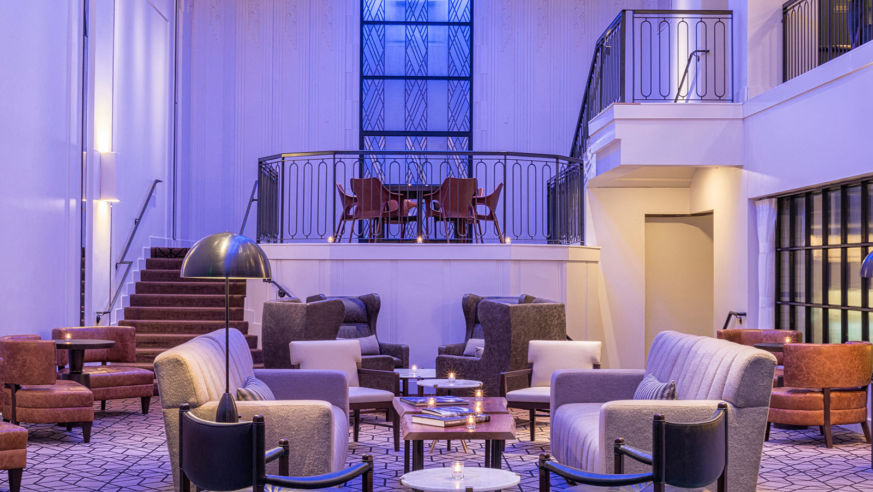 The Theodore in this Seattle hotel's name is a nod to the 36th president, who stayed at the property during and after his term. When it opened in 1930, it was an Art Deco temple, a showcase of the promise of the riches of the Pacific Northwest, and it was all thanks to the help of local creativity and industry, from the furniture makers to the laborers and craftsmen who built the place. It continues to be a tribute to Seattle originality, from the quirky art on the walls to the objects on display chronicling centuries of Washington's innovation culture. (More on that in a moment.) Sleek and sophisticated yet laid-back and casual, Hotel Theodore fuses then and now for a rich and whimsical snapshot of the city.

The building, crowned with a glowing vintage “Roosevelt” sign, was unveiled in 1930. A model of glamour, it featured a grand lobby and Art Deco detailing. Recent renovations kept the bones of the lobby in place and restored the Art Deco touches. It opened to guests in November 2017.

Tufted leather headboards and dark wood furniture calls to mind the vintage elegance of the place, but the technology and little perks (Nespresso coffee makers, retro-looking Tivoli clock radios, luxe linens, oversize LCD televisions) remind you you're very much in the 21st century. And a peek inside the mini fridge reminds you you're very much in Seattle, what with the range of local beers to choose from. Among the 153 rooms, there are nine size options. About 80 percent have king beds, but even the smallest Deluxe Double is luxe and spacious.

The hotel sits smack in the middle of downtown Seattle, a notably walkable city. An array of local restaurants as well as familiar retailers—Nordstrom, Macy's, H&M—are located within blocks. It takes 15 minutes or less to walk to the famed Pike Place Market or the hip enclave of Belltown, and a little more than that to reach Capital Hill, a popular tourist destination for coffee-loving visitors, as it's home to the sweeping Starbucks Roastery, a veritable carnival of a coffee house with a food court–like setup and a huge roaster that attracts a picture-snapping crowd every few hours when it motors up. There's even a bar. Should you feel like venturing out to the beach or opt for public transportation to and from the airport, the hotel is a few blocks away from a Link light-rail station.

When it opened, the hotel was a pioneering example of a hotel that emphasized experience, not just practicality. To that end, its original restaurant, the Old West-themed Rough Rider Room, was a destination for visitors and well-heeled locals. That ethos remains at the industrial-chic Rider, where you can watch oyster shuckers in the kitchen and cooks at work at the open wood-fired grill station. The dishes—largely seafood—are simple and unencumbered, yet indulgent. The cocktails, on the other hand, are exercises in zany creativity. Case in point: At the Oyster Bar is a mezcal drink with touch of oyster water. The bar is open until midnight, so take your time with those drinks. The breakfast menu offers decadent sweet and savory options.

For a midday pick-me-up, MADE Coffee, located in the lobby, is very much in line with coffee-obsessed Seattle code, with its offerings of craft java drinks made with beans roasted on a 1949 Balestra wood-fired roaster.

About those aforementioned objects on display...The hotel teamed with Seattle’s Museum of History & Industry to curate items that tell an engaging history of the city’s innovative spirit. Take time to visit each floor, where you can find cases displaying everything from axes and saws and other logging tools to the digital insides of Amazon’s Jeff Bezos’s first Kindle to draft tools used in designing Boeing’s early aircrafts. But ask any hotel staffer’s opinion, and she’ll likely tell you her favorite is up on the 17th floor: an early model of native son Eddie Bauer’s first down jacket.

No matter where your day takes you, try to get back to the hotel between 5:30 p.m. and 6:30 p.m. for the aperitivo hour, when they offer complimentary drinks.