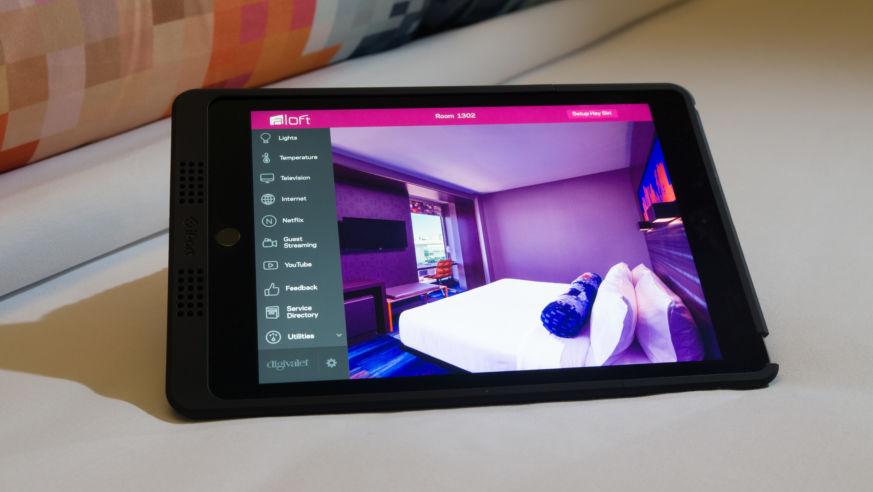 From voice-activation to streaming features galore, hotels are bringing creature comforts into the digital realm

The instruction was simple enough: there was a cute robot on a sticker on the mirror at the entrance of my hotel room. If I needed a wakeup call or anything else, I could text the phone number next to the 'bot, whose name is Botlr, and voila! Done. I sent the text, and it immediately confirmed it was set. "No problem!" it continued. Then came the rest: "I'm happy to help. FYI, breakfast is available at Re:fuel from 6am to 10am. My favorite is the English muffin, egg and bacon. Basically the best way to start your day." There was a frying pan in there, too.

Noted, Botlr. I don't eat bacon, but thanks.

ALL THE COMFORTS OF HOME, ON THE ROAD

Bottl is merely one example of how hotels are incorporating smart technology into their everyday guest experiences. The Aloft property’s efforts don’t end there. In a select rooms in their 130-room Boston property, which opened in 2016 in the city’s rapidly developing Seaport district, ten are equipped with voice-activated technology, making it the first room of its kind in the industry. Guests set up use a custom app so they can use their own voice to adjust lighting, play music, surf television channels, and explore options for local attractions. And regardless of what room you stay in, anyone with the Starwood Preferred Guest awards program has access to the keyless room, which allows you to use your smartphone to unlock your room as well as bypass the desk at check-in. Add to that the fact that the 100-plus hotels around the world have put a premium on its fast, free Wi-Fi and Aloft stands as a fine example of how hotels are using implementing digital services on a variety of scales, from the full-fledged Futurama intensity to the basic, but increasingly necessary, convenience-is-king level.

“In this day and age, there are blurring lines between home and away. People who are away want to feel at home," said Christy Loy, Aloft's hotel manager. "Tech is so intrinsic in our lives, from the way we watch content to setting security and lighting at home. It's part of how guests expect to live life. So at a hotel, it helps guests feel connected to what’s important to them.”

The future is now at hotels around the country. From high-end luxury palaces to budget-minded chains, companies are pulling out all the stops when it comes to technology. Some digital programs and amenities are designed as a matter of convenience, others are intended to ensure guests can feel like they’re in their home away from home when they’re on the road, complete with creature comforts like one’s personal Netflix account streaming right to the television. And other initiatives yet are created to astonish. This tends to involve robots, artificial intelligence, or some other ultra-high-tech wonder. Want to do yoga in your room? Program a smart mirror to instruct you. But for the most part, it’s just hotels doing their part to keep up with the rest of our everyday lives.

Deanna Ting, hotels editor at Skift, a travel trade organization and publication, commends Starwood, calling out Aloft in particular, for it being an early adopter. She notes that Marriott’s approach is to work with Legrand, Samsung, and other electronic brands to incorporate voice activation and take personalization to the next level, but these early implementations are merely just a suggestion of where the technology can go. But she warns to not to be too swept away by Jetsonian elements.

“If something sounds outlandish, it probably is. In terms of guest experience, the biggest tech trend to keep an eye on is deployment of smart hotel rooms," she told me. "Some chains are doing it to various degrees. Hilton’s idea of internet of things is to put control of rooms in guest hands.”

YOUR SMARTPHONE: THE KEY TO THE HOTEL ROOM OF THE FUTURE

Indeed, to enhance guest experiences, Hilton’s services include choosing a room through the app, which is available to any Hilton Honors member. (The awards program is free to join.) Josh Weiss, Hilton's VP of Brand and Guest Technology, explains that the app lets you control the room before you even arrive. For instance, you can open the door, set the lighting and thermostat, which contributes to energy efficiency, as energy isn’t being wasted to heat or cool a room unnecessarily. Upon checking in, you can open the door, raise or lower the curtains, and sync the television to a personal Hulu and Netflix accounts. And as a clever thoughtful bonus, the app lets you select channels by icon instead of spending time figuring out what channels correspond to which network if you don’t feel like scrolling through the menu. And as an added convenience, the app alerts the hotel if any system isn’t working.

Focusing on software, versus equipment, in the nearly million rooms of its 5000-plus hotels allows for aggressive flexibility.

Weiss says Hilton is also tackling another tricky aspect of travel: exercise. Hilton’s recently implemented Five Feet To Fitness initiative lets you book a room with exercise space and equipment, even a bike. “Five Feet To Fitness transcends price-points. It’s a convenient, comfortable ways to stay fit,” he said, explaining guests can stream fitness instructions on their television. It won’t replace fitness centers, it just gives another option to guests who prefer privacy.

Weiss also notes Hilton’s focus on sleep. "In terms of the Internet of Things, there are devices for white noise and sound isolation," he said. "We’re working on making them compact and scalable so guests everywhere can enjoy them.”

FROM VIRTUAL REALITY TO THE REALITY OF A HOTEL STAY

Best Western Hotels & Resorts, another mega-chain, uses virtual reality to allow guests to experience the hotel pre-arrival, allowing guests to see layout online and give a sense of what they’ll experience at the property. “It’s more than just a static picture, they can sense it,” said Ron Pohl, Best Western's Senior Vice President and Chief Operating Officer.

Other initiatives include using the Echo Dot to ask about the weather or request extra towels be delivered. “We’re all connected 24/7, so how can we apply that to apps, to the phone, to make it feel more like home. Expectations are set at residence, and people want the same capability when traveling,” Pohl told me. “If you come into hotel, we want to identify who you are without you having to tell us. We’re always looking at how to inform before you ask, so we ask you. Then we can send things based on what we know, like notification of a seafood special in the restaurant, or something going on in the area.”

He also noted that the hotel industry is merely following trends set by other industries. “Before hotels dictated how they communicated with customers. Today customers are driving that, they decide when they want to talk to the hotel. Automation caused that. People would rather do it themselves and not rely on other humans. It adds to ease of the customer experience. We call it 'frictionless,' from booking through departure.”

Speaking of note relying on other humans, Caesars Entertainment Las Vegas Resorts implemented a 24-hour virtual concierge that can, in typical Vegas fashion, perform some over-the-top feats. Michael Marino, Chief Experience Officer, describes it as a remote control—with artificial intelligence-- for stays at over 10,000 rooms across several Las Vegas resorts. (Plans are to roll it out to the rest of the properties later this year.) Her name is Ivy and she’ll greet you with a welcoming text upon arrival. After that, she’s capable of making reservations for restaurants and each hotel's spas, booking tickets for shows, ordering food that can be delivered anywhere on the premises, even the casino floor. It’s so efficient and engaged that people have been text it soliciting advice. (“Is this outfit right for tonight?”) TripAdvisor reviews suggest guests ask for Ivy, as if it’s a human concierge. But Marino is hardly resting on his laurels.

"It's quickly becoming table stakes. People are starting to expect this kind of stuff," he says. "Even 18 months ago, it was a 'wow' factor, but there's not nearly as much reaction like "I've never seen anything like that in my life." There are cool things everywhere, but this isn't just a bell or whistle that’ll be stale soon. It’ll always be helpful to people.”