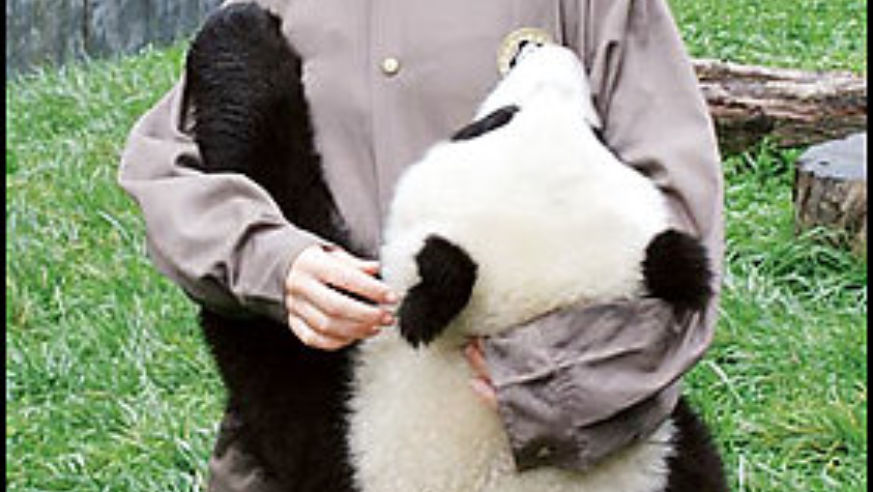 courtesy Joshuah Bearman
The desire to hug is mutual

You haven't had a bear hug until you've cuddled with a panda (or better yet, a panda cub). There's a reserve deep in China that makes it possible.

It began by accident. My girlfriend, Ronni, and her twin sister, Marina, rented a documentary on panda bears. We all melted. Then we went online and found videos of tourists, somewhere in China, embracing pandas. One showed a gaggle of cubs eagerly descending a slide in what looked like panda day care. "We have to find this place," Ronni said, eyes lighting up.

A friend of a friend had recently gone to China on a botanical excursion, and I could see the wheels turning in Ronni's and Marina's heads. Soon enough, we had tickets and immunization appointments. Much in the same way you might say, "Hey, let's go to a movie," we made plans to cross the Pacific.

We had no basis to believe that meeting pandas was possible for ordinary people. We consulted guidebooks and online travel forums, and our best bet appeared to be a facility for research and visitors at the Wolong Nature Reserve, about five hours away from Chengdu in Sichuan province. Because it was difficult to reach, we figured it must be more rewarding.

Once in Hong Kong, I contracted a fixer on the mainland to help sort everything out. His name was Huang, and he'd been to Wolong earlier that year with National Geographic.

Ever since Empress Wu Zetian sent a pair of panda bears to the Japanese emperor around A.D. 700, China's public face has been represented by the furry goodwill ambassadors, who even forced a smile from Richard Nixon. Today, we noticed upon arrival in Shanghai, you don't see dour Mao nearly as much as Jingjing, the flower-crowned cartoon panda that's one of the Beijing 2008 Olympic mascots, and just the first in the parade of pandas that adorn China's storefronts, advertising, clothing, and vibrant cell-phone-charm industry.

In Chengdu, we were greeted at the airport by a 40-foot column topped with a giant bronze panda. On our way into the city, we also couldn't help but notice that the lampposts, rickshaws, and even highway overpasses were festooned or stenciled or otherwise decorated with pandas.

But Chengdu was just a transit point for our trek along the Min and Pitiao Rivers to the Wolong Nature Reserve. We hired a driver, part of a fairly dodgy tour we'd found last-minute on the Internet. All road travel in China happens frenetically--the constant, aggressive brinksmanship of millions of shoddy minivans with toy-like wheels. We left for Wolong at dusk, ascending steep gorges that sometimes disappeared into the mist, on roads that sometimes disappeared altogether.

There's no real town, and not many restaurants, other than the shabby ones at the Wolong Hotel and the Panda Inn.

The following day, we awoke to a crisp and cool autumn day, with the sound of the river filling the narrow valley. This is the panda's native habitat, a subalpine arboreal wonderland that makes you understand Chinese fairy tales. The China Conservation and Research Center for the Giant Panda has marked off large enclosures for its several dozen pandas.

Last summer, the notoriously fickle pandas produced 18 cubs. We could see some of them through the glass of the nursery. The newest born were tiny pink nubs. Those slightly older were fed with bottles. The cubs we had seen online were from the previous summer. A little over a year old, all 16 played together in a single enclosure next to the nursery.

Three Japanese girls entered the day-care center and frolicked among the cubs. "How can we do that?" I asked Tang, one of the keepers. He took us to an office, where we discovered advance work to arrange a special panda visit is unnecessary. To hug baby pandas, all you have to do is show up and pay the Wolong Panda Club $130 per person.

That's nothing for five minutes of nirvana. In the flesh, the cubs were so unbelievably cute that they seemed artificial. With their round heads, big eyes, and rolling gait, they looked and acted like Jim Henson creations. Touching one felt like meeting a unicorn.

The cubs moved like puppies in a curious, playful swarm. They didn't lick so much as nuzzle. And grab: To our delight, the desire for hugging was mutual, and what began as a careful encounter quickly devolved into fuzzy mayhem as the cubs attached themselves to our arms and legs. At one point, Ronni was dragged to the ground by a clutch of cubs, and she beamed beatifically. "I can't believe this is happening," she said as she freed herself, only to be taken down again.

After the staff pulled the cubs off us, we stood around in a daze. Stepping back outside of the panda pen, Ronni stopped grinning long enough to say, "I want to do that again."

Round-trip airfare between Chengdu and Beijing, Hong Kong, or Shanghai runs $400 to $680 on Dragonair or Air China.