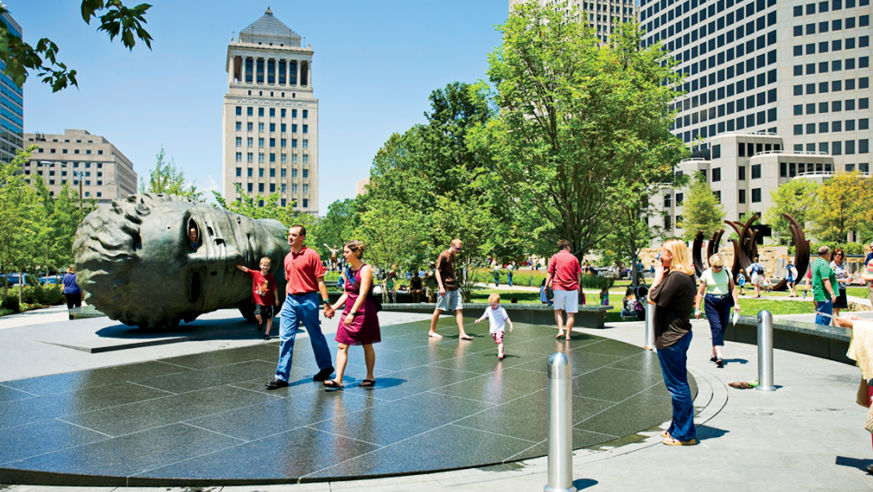 At the end of every summer comes a day of reckoning, the time when every man, woman, and child must answer a crucial question: So, what did you do on your summer vacation? We're here to make sure you have a very good answer.

At the end of every summer comes a day of reckoning, the time when every man, woman, and child must answer a crucial question: So, what did you do on your vacation? We're here to make sure you have a very good answer, whether it's in the form of awe-inspiring photos of Utah's desert rock canyons at sunset, fish tales earned on a kayak trip in South Carolina, or that American classic: a story about how you rode the killer new roller coaster five times without getting sick. Whether you reveal the location of your new secret beach, however, is entirely up to you.

The trailhead for the newly rebuilt Triple Lakes Trail in Denali National Park & Preserve is steps from the visitor's center, so even the laziest hikers can make it to the great Alaskan outdoors. But push yourself (if you can) to the outer reaches of the 8.6-mile hike. That's where you'll find the namesake lakes that attract trumpeter swans, horned grebes, muskrat, moose, and the occasional grizzly. You'll also cross a 130-foot suspension bridge over rushing Riley Creek and hike along ridges that look up to Pyramid Mountain. nps.gov/dena, seven-day park permit $20 per vehicle.

Like most spectacular national parks, the Grand Canyon is plagued by spectacular traffic. Not at the paved Hermit Road Greenway Trail, which skirts nearly three thrilling miles of the South Rim and is off-limits to cars. You can rent a bike trailside in one of five frame sizes and Burley Bee trailers for the under-eight set. bikegrandcanyon.com, from $10 per hour.

Bang a gong, play an African talking drum, or form an Indonesian gamelan band at the Musical Instrument Museum in Phoenix. The 12,000-piece collection contains noisemakers from every country—and at least one from an international superstar (a Steinway piano John Lennon once owned). Best of all, you can hear each one, either in audio and video recordings, a weekly concert series, or in the Experience Gallery, where museumgoers can play dozens of exotic items. (We've got dibs on the sneezewood xylophone from Mozambique.) 4725 E. Mayo Blvd., themim.org, adults $15, children 5 and under free.

In the public imagination (and in prehistory), Tyrannosaurus rex has always loomed larger than life. The new Dinosaur Hall at the Natural History Museum of Los Angeles County, opening July 16, brings the mythic monster down to size. Three sizes, actually. The 14,000-square-foot space—twice as large as the museum's former dino display—was built to show off the three growth stages of a T. rex: a 10-foot baby, a 20-foot teenager, and an appropriately imposing 30-foot adult. The alpha beasts are in good company: The museum's skeleton crew includes 17 other full-body specimens (many rarely displayed) and more than 300 fossils. 900 Exposition Blvd., nhm.org, adults $9, children 4 and under free.

Whether you flip for freestyle frolicking or organized games, the nine-month-old House of Air trampoline park has you covered. The former airplane hanger in the Presidio contains a free-jumping area the size of a basketball court (with 42 contiguous trampolines and elasticized walls), a trampoline dodgeball court, and a bounce house for the littlest leapers. If you need another push to get hopping, consider the thrill of checking out (ever so briefly) the Transamerica Pyramid while mid-air, through the hangar's wall of bay-facing windows. 926 Old Mason St., West Crissy Field, houseofairsf.com, $14 per hour.

When you sign up for a Boulder Brew Bus tour of the area's best craft breweries, you get more than a built-in designated driver and his tricked-out wheels. On the four-hour trip, a chauffeur shuttles you to three esteemed hop houses—Avery, Twisted Pine, and Upslope—for unlimited beer samples and behind-the-scenes tours. Mid-jaunt, guides dole out BBQ from the West End Tavern. Eat up—you'll need the fortification. 926 Pearl St., thewestendtavern.com/theboulderbrewbus, tour $45, including one meal and tastings.

Swashbucklers, hoist your sails and head for the artifact-packed St. Augustine Pirate & Treasure Museum (12 S. Castillo Dr., thepiratemuseum.com, adults $12, children under 5 free). This is the only place in the world to display an authentic pirate's treasure chest (property of Captain Thomas Tew roughly 400 years ago), plus a 19th-century Jolly Roger flag and an original "Wanted" poster with a 500-pound sterling reward for the capture of pirate Henry Every, dated 1696. Across the street, cannon-firing demonstrations take place Fridays, Saturdays, and Sundays at the Castillo de San Marcos fort (12 S. Castillo Dr., nps.gov/casa, adults $6, children under 16 free).

Touring the Dalí Museum's new waterfront home is like stepping inside one of the artist's trippy, drippy dreamscapes. A concrete cube with a glass dome that seemingly melts down its side, it houses an impressive three-story corkscrew of a staircase, 96 surrealist oil paintings (including The Disintegration of the Persistence of Memory), and more than 1,300 watercolors, sketches, sculptures, and objects. The whole affair is surrounded by the Avant Garden, which includes a hedge labyrinth and a vertical, mist-soaked orchid wall. 1 Dalí Blvd., thedali.org, adults $21, children under 6 free.

Look out, Las Vegas. Kansas City is making waves with a swanky swim-up bar that rivals the splashiest pool scenes along the Strip. The Jones, a 20,000-square-foot pool deck and lounge, is perched on the roof of a six-story building downtown and has 12 private cabanas you can reserve online. With a menu full of signature drinks (including the Bobby Jones, made with sweet tea vodka, lemonade, and Chambord) and a rotation of West Coast and local DJs on weekends, this is not your teenager's pool party. Come early to snag a lounge chair—or to avoid the slightly wilder late-night scene that keeps going until 3 a.m. Saturdays. 1271 Main St., thejoneskc.com, admission $5, cocktails from $6.

Why stop at smelling the roses when you can go ahead and eat the exhibits at the Heartland Harvest Garden? The 12-acre addition to Missouri's Powell Gardens encourages kids to think with their stomachs—sampling fruit from the garden's trees and racing through a maze of edible hedges. A blackboard near the entrance lists what's ripe for the snacking each day. 1609 NW U.S. Hwy. 50, powellgardens.org, adults $9.50, children $4.

Feel the need for speed? Get behind the wheel of one of the 15 racing simulators at the NASCAR Hall of Fame. You'll start your engine, shift gears, and maneuver through a virtual track, all while competing against other drivers in a race projected on a 50-foot video screen. Win or lose, you still get a victory lap around Glory Road, a replica of the 33-degree banked turns of the Talladega Superspeedway and the display area for the museum's 18 historic cars (including the 1939 Ford Coupe that Red Byron drove to win the first-ever NASCAR race). There's also a pit-crew challenge to see how fast you and your family can jack up a car, change a tire, and refuel. 400 E. Martin Luther King, Jr. Blvd., nascarhall.com, adults $20, children 4 and under free.

Imagine that a giant grabbed on to a baseball diamond by its first and third bases and lifted the whole thing 23 feet in the air. That's roughly what you get at the Laurie M. Tisch Illumination Lawn, a sloping, 7,200-square-foot swath of green draped across the roof of Lincoln Center's new restaurant, Lincoln. It's also a popular picnic spot and a cheap, cheeky alternative to the pricey Italian fare downstairs. No matter where you plant yourself, you're guaranteed a top-notch view of Henry Moore's bronze Reclining Figure—and a fresh perspective on the city park. W. 65th St. between Broadway and Amsterdam Aves., lincolncenter.org, free admission.

You'll need to develop some fortitude for this one-day photo boot camp in canyon country. Class runs from dawn to post-dusk to take advantage of the exceptional light, but then there's the payoff: frame-worthy images of red earth and rock formations, not to mention techniques and tips you can use in less spectacular surroundings. Photo pro Bret Edge takes each beginner-level group (no more than five folks at a time) to three locations each day, places like Dead Horse Point State Park, Mesa Arch, and Balanced Rock in Arches National Park. Instruction covers composition, depth of field, aperture and shutter speeds, and the basics of filters and tripods. moabphotoworkshops.com, photo workshop $250, including breakfast, park admission, instruction in the field, and image critiques.

You'd think that achieving inner peace would be enough for one long weekend, but not at Vermont's Wanderlust Festival. A spin-off of a Tahoe-based retreat, the four-day workshop (June 23-26) is built around a serious yoga program, with intensive instruction by 30 of the world's top gurus. Once you've attained your desired level of tranquility, you can shift your heart rate into high gear-with muscle-shaking arm-balancing classes and alfresco live-music performances. Bonus: Attendees get unlimited gondola access for meditative hikes on Stratton Mountain. stratton.wanderlustfestival.com, from $34.50 for a music-only day pass to $450 for four days of all-access activities.

Although the Twilight movies were actually filmed in Oregon and Canada, a red-blooded Edward-and-Bella tourism industry is emerging in the small towns of western Washington where the series is set. A handful of outfitters are hawking package-deal tours, but our money's on the DIY option: Twilight Territory: A Fan's Guide to Forks & LaPush, a photo-filled handbook sold by the Forks Chamber of Commerce that points the way to key locations such as Forks High School, the police station, and First Beach. If you have to ask what those places are, this is not the tour for you. forkswa.com/twilight, $10.

How to Plan a Vacation Grandma and Junior Can Enjoy